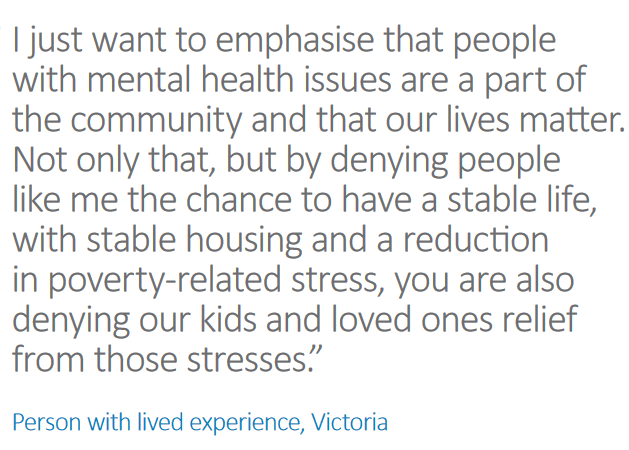 Image taken from the Summary of the 2015 National Review of Mental Health Programmes and Services.

Last week Croakey published an article from Toby Hall, CEO of St Vincent’s Health Australia, in response to criticism by mental health experts that funding for mental health is “locked down” in the hospital system rather than being invested in community mental health services.

Hall said that it should not be a “zero sum game”, and that while there is a need to increase resourcing of community-based mental health services, this should not be at the expense of important hospital-based treatment.

In the article below, Sebastian Rosenberg, Senior Lecturer at the University of Sydney’s Brain and Mind Centre, argues that the reverse is true.

He questions the latest report from the Australian Institute of Health and Welfare (AIHW) on both overall mental health spending and investment in community services and warns that funding trends are undermining commitments to community care made in successive national mental health plans.

The Australian Institute of Health and Welfare released one of their regular updates to the Mental Health Services in Australia dataset recently.  Their media release trumpeted that spending on mental health had reached its highest ever level. One of the key elements of this increase was stated as the “increased investment by state and territory governments in community mental health care”.

This is a critical matter.  Simplistically, when the asylums were closed, the theory was that people with all sorts of mental illness would be better managed and live with dignity in the community.  There would be a range of clinical and psycho-social support services to enable this to occur, including supported housing.  When people were really crook, they would go to the acute psychiatric wards of general public hospitals.

As repeated inquiries by parliaments, human rights commissions and others abundantly demonstrate, the theory described above has been largely a mirage. Community mental services are often very hard to find.  It is a common experience for families in need that help is impossible to find between the cognitive behavioural therapy (CBT) funded by the Federal Government under Medicare and the emergency department of the nearest hospital.

This makes the AIHW’s claim all the more puzzling.  A closer look at the published data reveals that in 2010-11 per capita spending on community mental health services was $83.61 and that in 2014-15 it was $82.49 – a small decrease. Spending on residential services was up from $11.98 per capita to $12.88 – a small increase, from a very low base.  Further, it should be noted that the definition of ‘community’ used by the AIHW in fact includes a range of hospital outpatient services rather than non-hospital services provided genuinely in the community. Australia cannot currently separate spending on hospital outpatient services from those actually provided in non-hospital settings.  The reality is that in most jurisdictions a high proportion of supposed ‘community’ services are in fact provided on a hospital campus, as outpatient services.

The only place where a significant increase in state and territory funding is to be found relates to spending on the psychiatric wards of public hospitals. Per capita expenditure here increased from $64 in 2010-11 to $72.35 in 2014-15.  States and territories are continuing to focus their effort and expenditure on hospital-based services, prioritising these above community care or the establishment of suitable community housing for people with a mental illness.

Increases in spending have indeed lifted the number of staff employed in public hospital mental health services. The direct care workforce employed in state and territory mental health services increased by 72 per cent, from 14,084 full‑time equivalent (FTE) in 1992‑93 to 24,292 FTE in 2010‑11. But at the same time the states and territories have found it impossible to lift the rate of access to care.  According to the National Mental Health Report 2013, the percentage of the population seen was 1.6 per cent in 2006-07 and the same 2010-11.

In addition to hospitals, the other main driver of increased spending in mental health is the Commonwealth’s ongoing investment in the Better Access Program which offers subsidised access to psychological care.  Medicare mental health spending as reported by the AIHW was $890.43 million in 2010-11, rising to $1.1 billion in 2015-16.

These spending patterns align with people’s experiences. You can get CBT.  It often helps.  But not always.  And when it doesn’t your next stop is likely to have to be the Emergency Department of a public hospital.  As Toby Hall suggested, hospital-based mental health care is often necessary and most people leave hospital better than when they were admitted.  But this is postvention – in cancerous terms waiting till your lump has grown big enough that it can no longer be ignored.  This is uneconomic, inefficient and very poor quality care.

Rather than paint a promising picture, the AIHW data in fact shows a dangerous situation where state and territory governments are continuing to invest rare and precious mental health resources into hospitals, making care available only once a person has become critically unwell and the situation where we continue to make people have to go to hospital to get care.

This is a moribund approach.  It renders hollow repeated commitments to community care made in successive national mental health plans. It is negligent in relation to prevention and early intervention.  Meanwhile the Federal government continues to blindly invest in the Better Access Program without any call for greater accountability, to verify whether this spending is actually helping.

Australia is a rich country.  But rather than build a modern, contemporary approach to mental health based around community care, we are continuing to direct new funding into old and failed systems.  When will we learn?

Mental health does urgently need new funding but it needs to be directed to the right places. The real problem here is: while the Feds are responsible for primary care and the States the hospitals, who is responsible for building secondary mental health care services in Australia?