Airborne? Memories of another virus and panic’s rise and fall 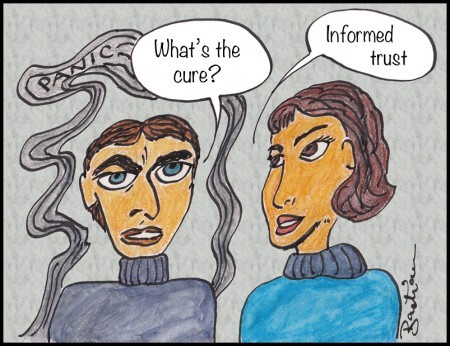 Thanks to Hilda Bastian and Scientific American for permission to republish this very timely article that looks back on a Medical Tribunal review sparked by by an HIV AIDS in Sydney in the 1990s and considers the role of trust and transparency when panic is in the air.

She started by asking me something like, “We understand you know a lot about AIDS, is that right?” “A fair bit, I guess. Why?”

It was 20 years ago, in Sydney – before the antiretroviral drug combinations arrived. It was the year AIDS became the leading cause of death for people aged 25 to 44 in the US – and the year Randy Shilts, author of And the Band Played On, was among them.

We were in the midst of another round of AIDS panic in Australia.

The woman on the phone asking me about my knowledge and beliefs about AIDS was from the state Medical Board. They were constituting a Medical Tribunal to tackle the cause of the AIDS scare. A Medical Tribunal was a formal court proceeding, with the power to revoke a medical practitioner’s license. The Tribunal members were always a judge, two doctors, and a member of the community. For this case, that fourth person ended up being me. 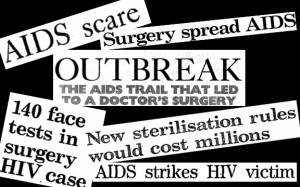 The case we had to adjudicate had burst into public view with a notice inThe Lancet and a news conference in December 1993. It was the first known patient-to-patient HIV transmission in a developed country.

Until then, people had thought the virus couldn’t be transmitted when there were universal basic infection control procedures. Theories immediately burst out, and journalists gave them plenty of airtime – the virus had become more virulent and therefore easy to catch, for example. Or it was airborne now. For some doctors, it seemed as though anything was better than considering that their normal practice could be having such disastrous consequences. They fueled the speculation about the virus into overdrive.

The transmission happened on one day in 1989. Four women, aged 18 to 81, were infected. They were having very minor procedures – like having a mole removed – in a Sydney doctor’s suburban surgery. A patient before them that day was HIV-positive, though unaware of it (dying from AIDS-related illness in December 1992).

The 4 women first learned that their HIV was now officially medically acquired on the evening news: the investigation had maintained tight security even from them. For one of them – who had her second baby while infected without knowing it – the battle to work out how she’d been infected, and convince the Health Department that what happened in that surgery needed to be investigated, had been a long one.

That, and most aspects of the way this case was handled leading up to the Tribunal copped a lot of criticism. The media regarded the whole thing as “a public relations disaster” for the Health Department.

HIV stigma wasn’t at its peak then, but it was still horribly high. And it didn’t take much to set off people’s fears about medically-acquired infection. HIV had no longer been a high risk of blood transfusions for years, but the hemophilia-related court cases were only just winding up in Australia.

As a US Institute of Medicine Committee said a while later: “Perhaps no other public health crisis has given rise to more lasting anger and concern than the contamination of the nation’s blood supply with HIV.” It was like that in Australia, too. On top of that, the Hepatitis C contamination of the blood supply had only recently been discovered and resolved. Confidence in the system was easily shaken.

Early in 1994, one of the 4 women died from AIDS-related illness. And then in the middle of the year, there was a new scare: this time, because an ob/gyn in Sydney was diagnosed HIV-positive. The Health Department was trying to track down a large number of women to test – none were infected, thank goodness. But when that became a story after the husband of one of the women tested blew the whistle to the media, the two stories collided. And the Health Department’s credibility was fully shot.

On 1 August on the 7.30 Report, a seriously respected program on the ABC (Australia’s equivalent of the BBC), the journalist’s response to assurance by a Health Department spokesperson that women and babies were in no real danger, went like this: 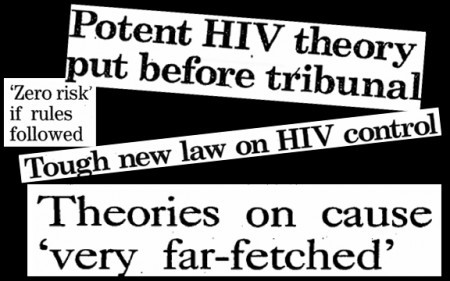 A few weeks later we started the hearings. Tension was very high. Later, Merrilyn Walton, head of the body prosecuting the case, would write that there had been concern about having a Tribunal at all. Some believed that the profession should have handled it behind closed doors, which would have been an option.

The Tribunal, in contrast, is a very public process: open court. There’s a lawyer prosecuting, and the doctor can be defended by a lawyer too. Two of the women who had been infected also had lawyers there.

Catherine Waldby and colleagues associated with the National Centre in HIV Social Research later studied this episode, concluding that the Tribunal had been an effective and constructive solution. I think so, too. At the start, though, it felt as though things might spiral. On the first day, I had to get through jostling reporters and TV cameras to get into the courtroom. I stopped using the public entrance.

Inside, the Tribunal was its own little world, with the 4 of us on a kind of island where we were the only inhabitants. We’d sit on the Bench, retire out back to talk amongst ourselves. And we’d read – big piles of scientific literature, the voluminous documents tendered as evidence, and the ballooning transcript. The judge delivered our written findings a few weeks after the hearing. It was about a year since the news conference that started it.

There was, though, no way to be certain what had happened on an unremarkable day 5 years before. The best we could do, we concluded, was an “elimination of the impossible leaving us with a choice between the more unlikely and the less unlikely.” An undefinable infection control breach, for which the doctor was responsible, was the only explanation. The doctor kept his license (although with restrictions). We rejected what had been put to us to support theories that there was a new method of transmission of HIV or that this particular virus was unusually transmissible. 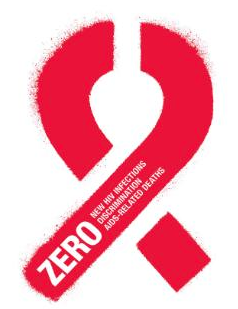 For the community, this chapter was closed. There was no wedge of difference in the message about the virus coming from us, the leading scientists, and AIDS community leaders. The Tribunal not being overly punitive to the doctor reduced the risk of professional alienation. And it respected, I believe, both the nuances of viral transmission and what the system would need for the wheels to turn for the patients who had been infected. There had been turmoil about the necessary tightening of Australia’s infection control guidelines, but that settled down.

It had been, in essence, a familiar, accepted ritual by an institution that held, and kept, most people’s trust. Although some thought that the profession had protected its own, that didn’t get to hold sway.

I think an open system incorporating community representation helped. The Sydney Morning Herald, in the middle of the hearings, referred to me as a “respected” consumer advocate and “a dogged crusader.” That alliance between a community’s institutions and the people who are trusted to hold those institutions to account is a powerful thing in times of crisis. Having that process hard-wired into the system helps. There was no need for a mad scramble: that phone call from the Medical Board to me was the normal course of business.

In the 2002 Reith lectures, Onora O’Neill spoke of the need for “virtuous spirals of trust” in times of crisis, when people’s confidence is shaken. If our community structures can’t be trusted, or we undermine trust in them too readily when we’re not in crisis, then we’ll have a problem when we are.

That trust is more fundamental than information: panic is not just a rational matter. There’s something elemental and primal about people’s fears of what gets in their blood, the water, and the air. It doesn’t take much to set it off – and it’s very hard to wind back. People often say it’s ignorance. But I think that’s too simplistic an approach to survival instincts and the rise of fear.

It’s not really all that long ago that miasma (or “bad air”) was believed to explain how disease spread. It’s not that many generations ago that John Snow faced a battle to convince people cholera was in the water, not the air. The air is symbolic of what we can’t see – it’s not just a physical reality. Experts may see a major difference between an airborne virus and the spray of droplets, but these mechanics, it seems to me, carry the same emotional weight in the community when self-preservation instincts rise up. The different level of risk is a more abstract concept to communicate and get in perspective. And we’re not yet as good at that as we are at sensitizing people to mechanics.

We’re not as good as we need to be yet, too, in not letting mass media stoke mass panic, as it’s doing now in what Maryn McKenna has so aptly named “Ebolanoia.” In 1994 when this particular cycle of AIDS panic was rising and falling in Australia, the antiretroviral drug combinations were about to change the balance of fear in the community about HIV. But that year, The Hot Zone was published. And as Tara Smith wrote recently, the mythos of Ebola as a potentially airborne terror began. It’s not going to be easy or quick to de-escalate.

Sociologist of science, Harry Collins, writes in his wonderful book, Are We All Scientific Experts Now?, that one of the advantages we have now, are scientists getting better at communicating, and a group of journalists gaining both expertise and trust in communicating about science. We need to spread their work to help create those virtuous spirals of trust.

See also my post on 5 Shortcuts to Keep Data in Risks in Perspective: and my posts on risk-related themes are in this Storify theme index.

The cartoon that starts this post is my own (Creative Commons License): more at Statistically Funny.

The “Zero” red ribbon is from the 2011 World AIDS Day Campaign.

The NSW Medical Tribunal’s findings in the case of Thomas Davis, from 12 December 1994, can be downloaded here.

Sources for the headlines used to create the images (sometimes partial) and media coverage for this post were from the Sydney Morning Herald’s archive – because it’s accessible online, not because it was the source of the most egregious panic-inducing media coverage. In particular, I used:

Melissa Sweet: Saturday portrait [of Hilda Bastian]: A voice for the people (10 September 1994)

Letter by Professor John Dwyer: AIDS scare is no cause for alarm (23 December 1993)

* The thoughts Hilda Bastian expresses here at Absolutely Maybe are personal, and do not necessarily reflect the views of the National Institutes of Health or the U.S. Department of Health and Human Services.

About the Author: Hilda Bastian likes thinking about bias, uncertainty and how we come to know all sorts of thing. Her day job is making clinical effectiveness research accessible. And she explores the limitless comedic potential of clinical epidemiology at her cartoon blog, Statistically Funny. Follow on Twitter @hildabast
Share 0
Tweet
Share
Share