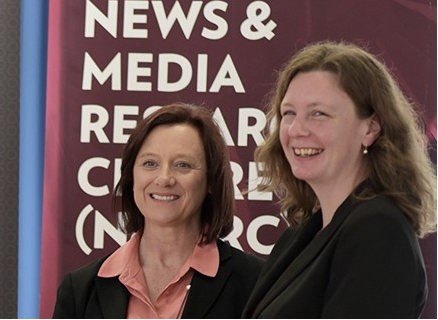 The complexities for public health messaging around women drinking during pregnancy have been highlighted by new research undertaken at the University of Canberra’s News and Media Research Centre.

The study found that women are receiving, and actively interpreting, contradictory information about the risks of drinking alcohol while pregnant from a number of sources.

The qualitative research, Conversations about alcohol and pregnancy, was funded by the Foundation for Alcohol Research and Education (FARE), and undertaken by Dr Kate Holland and Associate Professor Kerry McCallum.

The researchers presented their findings at the ACT Legislative Assembly last week, coinciding with the launch of FARE’s Women Want to Know campaign in the ACT region.

The National Health and Medical Research Council Guidelines to Reduce Health Risks from Drinking Alcohol advise that for women who are pregnant, planning pregnancy or breastfeeding not drinking is the safest option.

This concern was reinforced in the report of the 2012 House of Representatives Standing Committee on Social Policy and Legal Affairs Inquiry into the prevention, diagnosis and management of Fetal Alcohol Spectrum Disorders, FASD: The hidden harm.

The report cites statistics showing that women continue to consume alcohol during pregnancy and that FASD is likely becoming more prevalent. The report also observes that “a number of myths persist regarding a ‘safe’ level of alcohol consumption and in some instances this misinformation is perpetuated by poor media reporting” (p. 49-50).

Such public discussion provides the backdrop against which we undertook the Conversations about Alcohol and Pregnancy project. Our research examined 110 items from online and print newspapers, parenting and pregnancy websites and television news and current affairs about alcohol and pregnancy between 1 January 2013 and 31 October 2014.

We also conducted interviews and focus groups with 20 Canberra women, who were currently pregnant, had young children, or were planning for pregnancy, to find out their views and experiences in relation to alcohol consumption and its risks during pregnancy.

Contested evidence
While there is strong reinforcement of the abstinence advice by many health professionals and advocates in the media, the Conversations about Alcohol and Pregnancy project found that there is ample potential for it to be undermined by the frequent emergence and media discussion of new research findings.

Our analysis of media reporting identified ‘contested evidence and advice’ as a dominant frame through which the issue was discussed. A key source for such stories was new published research variously highlighting the risks of moderate consumption or that moderate consumption is not associated with detrimental outcomes for children.

The flow of often contradictory research findings from one day to the next presents challenges for public health experts and advocates seeking to promote the advice that not drinking is the safest option. It may also create challenges for health professionals who are encouraged to inform women of this advice.

The issue is further complicated by the fact, as we found in our interviews with Canberra women, that women often receive the advice that the occasional drink is acceptable or unlikely to be harmful from their healthcare provider.

Factor this in with their observations of family members, friends and colleagues choosing not to abstain, often with no observed detrimental effects to their children, it is clear that women have available to them a range of sources of conflicting information and advice. Of course, this is not unusual in the context of the range of advice that women receive about what they should and should not consume or do during pregnancy.

Among the women we interviewed, drinking alcohol during pregnancy was generally understood as something that they knew they would refrain from doing as one part of having a healthy pregnancy. Nonetheless, some women did not see having the occasional glass of wine over the course of their pregnancy as being irresponsible or putting their unborn child at risk.

Many women also acknowledged that public health guidelines are not the place for nuance and trying to define terms such as ‘moderate’, ‘occasional’, ‘low level’. For example, Rebecca said:

From this perspective the abstinence message was seen as a responsible one. However, some women did question the abstinence message because they perceived a lack of evidence about the risks of low level drinking. Gabby described the zero alcohol message as a “total beat-up” that is not matched by what she sees as the relative rarity of FASD compared to the numbers of women likely to have consumed alcohol during pregnancy.

When asked about her overall views about alcohol and pregnancy Tamika referred to the contested evidence and the potential for the abstinence message to add to women’s stress:

I guess I think what the medical literature currently says is that drinking a lot of alcohol during pregnancy produces clear problems for your kid and so I’ve also read evidence that says one or two glasses of wine a week is not a big deal. And so I understand that the current line everyone to be as safe as possible, just don’t drink but I also understand the line that that stresses people out and makes them feel depressed about the whole being pregnant thing. So I think as long as everyone’s clear that if you just don’t drink a lot during pregnancy.

Our research found that women critically read and respond to public health guidelines, media reporting and expert claims, particularly when they are perceived to be unsupported by evidence or contextual information and do not resonate with their own experiences.

FASD was the most often mentioned topic across the corpus of media items included in our analysis, with 59% of articles mentioning it, even if it was not the focus of the story.

Because excessive consumption was not the experience of the women we spoke to, they often distanced themselves from stories they perceived to be alarmist. This included stories that appeared to associate FASD with any amount of alcohol consumption. Some also perceived stories reporting on punitive measures targeted at pregnant women as confounding the message that not drinking is the safest option. For example, Mary said, “they reinforce the opposite. That if you’re not an alcoholic then it’s okay”.

Some women were equally sceptical of what they saw as unsupported claims linking the NHMRC guidelines to women having abortions because they had consumed alcohol before learning they were pregnant.

Women negotiate a range of information and advice during pregnancy, including about consuming alcohol, and the public health advice they receive will necessarily compete with other sources of information. Some suggested that family and friends could be a source of perspectives and advice that carried more weight than official public health advice.

For example, in response to the question of whether she thought some women might be confused about whether or not it is okay to drink Mary said:

I think it comes back to family and friends and sources of information, that it’s still conflicting and people might look at the Guidelines, but then they might have their mum say, oh well. I drank with you. And then, okay, well I can have a glass of wine. I really feel like one, so it’s all right then. And yeah, sometimes people relate to experience more than government guidelines.

Women often challenged the idea that any amount of consumption was bad by emphasising that women are capable of telling the difference between excessive consumption and the occasional glass, that it is their right to make such decisions, and that within their own networks the occasional drink was perfectly acceptable. The women we spoke to were very reluctant to judge other women and some were concerned that public health advice urging women not to drink does have the potential to foster judgement of pregnant women.

In promoting the Guidelines and advising women on drinking, it is important to recognise that women will not necessarily accept such claims on face value and in the absence of evidence.

Women are also sensitive to practices of policing pregnant women and the potential for well-intentioned public health messages to be used to exacerbate women’s feelings of guilt and anxiety. One response to these practices is for women to distance themselves from such messages.

Women’s own understandings about alcohol consumption during pregnancy must be considered a vital component of public and public health conversations about alcohol and pregnancy. In the absence of what they perceive as convincing evidence about the harms of the occasional drink during pregnancy, some women may question the credibility of those seeking to convince them otherwise.

Kerry McCallum is Associate Professor of Communication and Media Studies in the News and Media Research Centre, Faculty of Arts and Design, University of Canberra.

Link to Drink Tank post where there is also a link to the full presentation: http://drinktank.org.au/2015/08/women-receive-mixed-messages-about-alcohol-and-pregnancy/