Home Public health and population health public health Aleppo crisis worsens: “The message is simple and I don’t know how to say it any louder: stop bombing hospitals.” 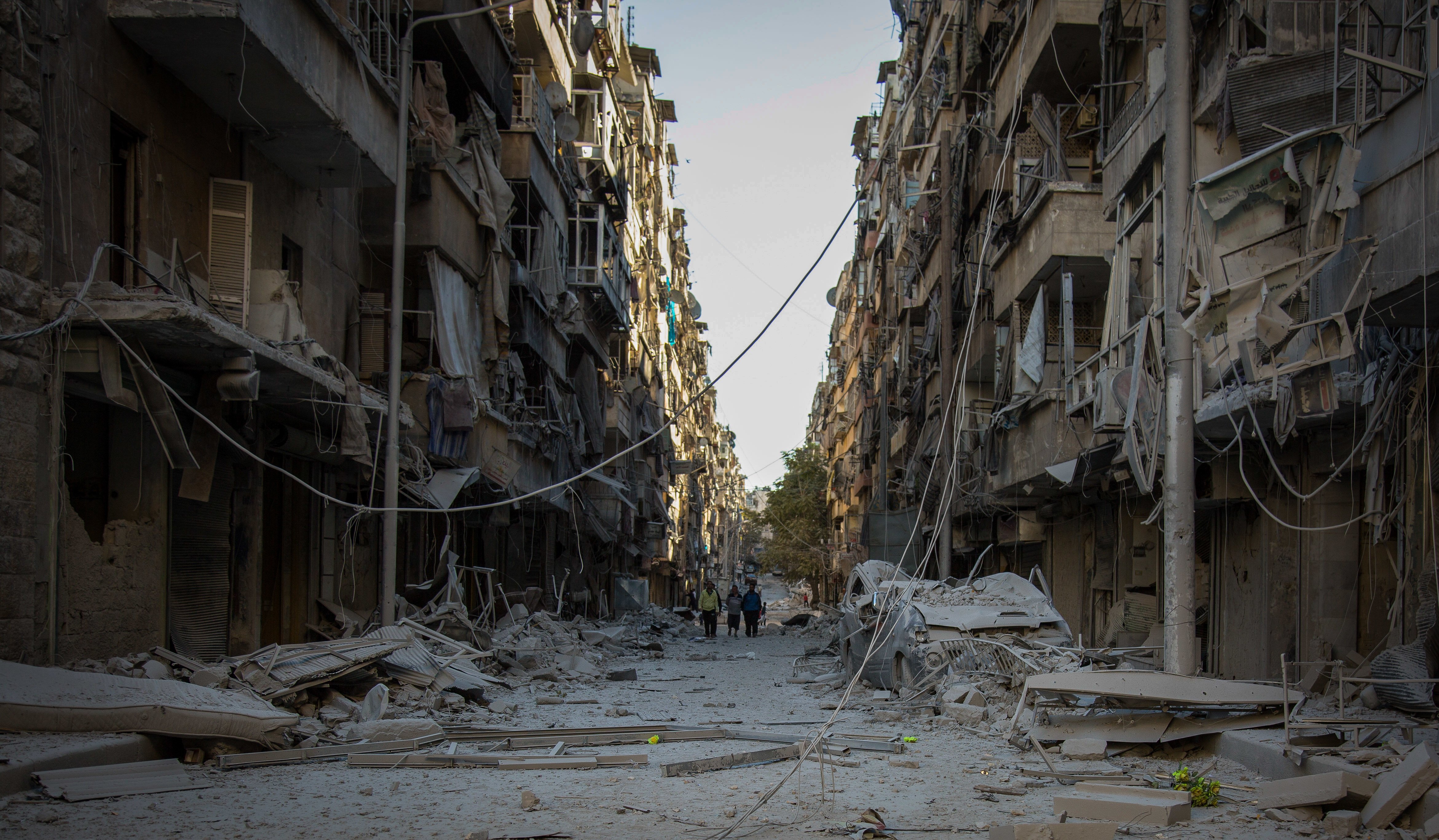 Photo, caption supplied by MSF : People walk down a street in Bustan Al Kasr neighbourhood after it was hit by airstrikes in mid-October 2016.

Aleppo crisis worsens: “The message is simple and I don’t know how to say it any louder: stop bombing hospitals.”

The humanitarian crisis in the besieged Syrian city of Aleppo has continued to worsen, with hospitals being “bombed into oblivion” and denied urgent supplies.

The United Nation’s top humanitarian official Stephen O’Brien told the UN Security Council on Monday that the past week had seen “an intense unleashing of military aggression in Aleppo and the surrounding rural area with truly devastating consequences for civilians” by Syrian Government forces. His full statement makes devastating reading.

Describing himself as all but at his wits’ end, O’Brien said:

Month after month I have reported to this Council that the level of depravity inflicted upon the Syrian people cannot sink lower, only to return the following month with hideous and, with shocking disbelief, new reports of ever-worsening human suffering….

Hospitals, health centres, blood banks and ambulances have all been hit. The fact is, since Security Council Resolution 2286 which was passed on 3 May 2016, over 130 attacks on medical facilities have been documented. The Syrian war has already killed more than 750 medical personnel. It is a disgusting and blatant disregard for the special protected status of health-care facilities under international humanitarian law; a clear ‘spit in the face’ defiance of your resolution.”

At the same session the World Health Organisation warned that health care services have been devastated across Syria, with over half the country’s public hospitals and primary health care centres either closed or only partially functioning. The UN reported WHO’s representative in Syria Elizabeth Hoff as saying:

On Sunday, the office of the  UN Secretary General Ban-Ki Moon issued a statement reminding all parties to the conflict that targeting civilians and civilian infrastructure is a war crime.

(From the Guardian liveblog today and this transcript and statement from Lima, there has been nothing public on Aleppo from the Prime Minister emerging from his bilateral meeting at the APEC conference with US President Barack Obama.)

According to the latest update (issued on 19 November) from international medical organisation Médecins Sans Frontières/Doctors Without Borders (MSF), the only specialised paediatric hospital in east Aleppo had come under attack for the second time since airstrikes resumed on 15 November, destroying three floors and leaving it out of service.

In a statement provided to Croakey, MSF said three other hospitals had also taken direct hits, resulting in casualties among staff and patients, and leaving two key surgical hospitals and the largest general hospital out of service.

It quoted MSF emergency coordinator Teresa Sancristoval as saying the bombing had inflicted “huge damage” on the few hospitals working around the clock to provide medical care.

“The attacks have destroyed entire hospitals, electric generators, emergency rooms and wards, forcing them to stop all medical activities. It is not only MSF that condemns indiscriminate attacks on civilians or civilian infrastructure, including hospitals, but also humanitarian law. The message is simple and I don’t know how to say it any louder: stop bombing hospitals.”

Warning of the “insurmountable suffering” of the people trapped in Aleppo, Luis Montial, MSF deputy head of mission for Syria said:

“The children´s hospital has sustained damage for a second time from airstrikes. This is the only hospital exclusively for children in the besieged area and it is now out of action. The consequences of indiscriminate bombing are very clear: more lives lost, medical services depleted and insurmountable suffering for people trapped by the siege. What is not clear is how much longer the health system, already on its knees, can carry on functioning unless the bombing stops and medical supplies are allowed in.”

MSF said that prior to the siege, it had been providing drugs, medical supplies and equipment every three months to eight hospitals, six health centres, eight first-aid posts, a blood bank and an ambulance service in east Aleppo. Since August, no deliveries of aid have been possible.

See at the bottom of the post, also, a statement issued on November 11 by MSF Middle East Operational Manager Pablo Marco.

According to this UN statement, the World Health Organisation’s Elizabeth Hoff told the UN Security Council on Monday that Syria had one of the most advanced health care systems in the Middle East before the conflict began.

Now, she said, health care services have been devastated, with over half the country’s public hospitals and primary health care centres either closed or only partially functioning.

Almost two thirds of all health professionals have left the country, and domestic production of medicines has dropped by two thirds and vaccination coverage rates have dropped by half (from 95 per cent), she said.

“Denying ordinary citizens access to health care is an affront to our common humanity,” she warned.

Syria has denied that any bombing of eastern Aleppo hospitals had taken place, though the UN has noted the denial contravenes the reports of bombings from WHO and other sources on the ground.

In his damning report to the UN Security Council, UN Under-Secretary-General For Humanitarian Affairs and Emergency Relief Coordinator Stephen O’Brien outlined devastation being wrought on the people of eastern Aleppo, reporting that:

“Since last Tuesday, the bombing of eastern Aleppo has not stopped. Over the past days, reports indicate that hundreds of civilians have been killed, injured or otherwise affected by the relentless attacks on eastern Aleppo. Entire families were reported to have been buried under rubble in the al-Sokkari district as first responders searched for survivors. Fires raged from incendiaries and household gas breaches in residential buildings following the attacks, which stretched throughout eastern Aleppo. Deaths were reported in at least 10 neighbourhoods. As of yesterday, there are barely any functional hospitals left in eastern Aleppo able to treat those who have escaped death, as all the hospitals are being bombed into oblivion.

“Humanitarian conditions in eastern Aleppo have gone from terrible to terrifying and now barely survivable by human beings. On 13 November, the last of the available WFP food rations were distributed. Prepositioned before UN access was cut off in July, rations were drawn out as long as possible but now they are gone. Only a handful of rations from local NGOs remain, food in markets is scarce, and prices have sky-rocketed. Fuel and gas to cook food is reportedly unavailable in most neighbourhoods. This is resulting in negative coping strategies, reducing meals and restricting diets to feed children.”

A human tragedy is unfolding while the world watches and does nothing. Months of siege and the indiscriminate bombing by the Syrian government and its allies have left the population of east Aleppo in desperate straits and its health system in tatters.

There is no way out for the 250,000 people there. Meanwhile, food and medical supplies cannot get in. MSF has been providing medical supplies, drugs and lifesaving surgical kits to eight hospitals in east Aleppo since 2014, sending in trucks every three months. Our teams last succeeded in getting some items through in August, during a brief period when the siege was broken by the opposition.

In the meantime, all eight hospitals have been bombed, one up to six times. Altogether they have been hit 27 times, forcing all work to halt on occasion. Staff are doing all they can to keep going.

But they are overwhelmed: no more than 32 doctors are thought to be left.

These medics work around the clock to help. In the recent period of intense airstrikes, between 22 September and 19 October, more than 2,100 people were wounded, including 436 children. Patients die because there are not enough operating theatres and doctors.

Often the wounded are unable to reach a hospital in time. At least six ambulances have been targeted, some destroyed. Spare parts don’t get through. Medical supplies, fuel for generators, drinking water and almost every other essential are running low.

The medical consequences of living in this environment are deeply shocking. The doctors we support are concerned about a potential increase in malnutrition in young children and in water-borne diseases. Some mothers are too weak to breastfeed, and a lack of formula milk and other basics is leading to preventable deaths. Routine vaccinations are suspended. All this is a big threat to the most vulnerable, including children, pregnant women and patients with chronic diseases.

What is needed is an end to all indiscriminate airstrikes on civilian areas, respect for medical facilities and patients, and an end to the crippling siege.

The seriously injured or ill must be evacuated to safe areas for treatment. Medical supplies and humanitarian aid must be allowed in, and respite given to a city falling apart day by day, hour by hour and minute by minute.