Aloha – Not everyone is happy or well in Hawaii: JournalWatch 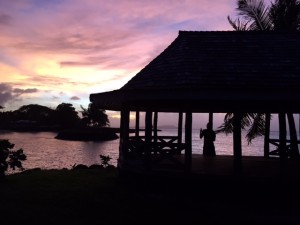 This edition of JournalWatch takes us to Hawaii, home of epic sunsets, birthplace of surfing and, according to recent research, the location of some concerning ethnically-based health disparities.

As Melissa Stoneham writes below, a study of hospitalised patients has found that those originating from the Federated States of Micronesia seemed to become sicker, younger than those from other ethnic/racial groups. The surprise finding needs to be explored further, but should prompt some action on the public health and health care policy front.

Hawaii….a destination that features on many a bucket list. If you believe the tourists websites, there is no place like Hawaii. They call it the land of eternal sunshine where the fresh, floral air energises you and the warm, tranquil waters refresh you.

So it was interesting to read this month’s JournalWatch article titled “Younger and Sicker: Comparing Micronesians to Other Ethnicities in Hawaii” which was published in the American Journal of Public Health.

Led by Megan Kiyomi Inada Hagiwara from the University of Hawaii, this article compared the age at admission and the severity of illness of hospitalised Micronesians with that of three other racial or ethnic groups in Hawaii. The findings were quite shocking showing that young Micronesians were contracting the same diseases as older people in other ethnic groups, resulting in either premature death or living a longer time with serious conditions.

Hawaii has become home to many different ethnic groups over the past 200 years. The majority of the population has ancestry in the Pacific Islands or Asia. The Micronesian emigration story is an interesting one. The Federated States of Micronesia (FSM) is located approximately 2 500 miles southwest of Hawaii and consists of 607 islands spread throughout approximately one million square miles in the western Pacific Ocean.  A wave of emigration from the FSM started in 1986, when the Pacific Island state signed a Compact of Free Association (CoFA) with the United States. “The Compact” provided the FSM with critical economic development aid. More significantly however, it provided FSM citizens with the right to migrate freely to the United States and its Territories and Commonwealths. Before the Compact, only a limited number of Micronesians emigrated, usually moving to other Pacific Island countries, such as Palau, the Marshall Islands and the Commonwealth of Northern Marianas Islands (CNMI) for jobs or advanced education. The pace of emigration changed quickly after the Compact was signed, as did the ultimate destinations. Within weeks, whole families of Micronesians and especially young, single men began leaving the FSM for countries overseas, at first to Guam and the CNMI and later to Hawaii and the U.S. mainland.

The exact number of COFA migrants who reside in Hawaii today is difficult to determine as they can move fluidly between their home nations and the US without a visa or Green Card. Current estimates range from 12 000 to 18 000 migrants in Hawaii.

As tax payers, COFA migrants pay for social service programs like SNAP (food stamps), Medicaid, the Children’s Health Insurance Program and federally subsidised education loans, yet do not fully benefit from all programs. In 2014, the cost to provide health, education and social services to Micronesians living in Hawaii totalled more than $160 million. Yet it is reported that the Federal Government only compensated the state $11 million annually for what is known as compact-impact aid.

I expect many would think that assimilation to Hawaii’s Polynesian-based society would appear natural for Pacific Island migrants who share cultural and historical parallels, but the article by Hagiwara and colleagues says otherwise, stating that many have unmet health needs. This study looked specifically at inpatient hospital records in Hawaii, and found that Micronesians were significantly younger, with more severe illnesses than other ethnic/racial groups when admitted to hospital.

The researchers compared age and severity of illness within disease categories as defined under the all patient refined–diagnosis related groups (APR–DRG). They identified multiple hospitalisations of an individual within each disease category, and used only the first entry within each disease category for each individual.  The data were grouped into 3 age categories representing younger (18–44 years), middle (45–64 years), and older (≥ 65 years) age on the basis of evidence of shifting disease risk after age 45 years. Ethnicity was self-reported.  Coding categories were created for gender, insurance status and location of residence.

The study, which is the first to quantify the existence of these health problems among the hospitalised Micronesian population, does tend to suggest that Micronesians living in Hawaii have fewer healthy years of life and overall shorter life expectancies than the non-Micronesian population. Of course, as the authors point out, it could also mean that older Micronesians are returning to their home islands, particularly when they have terminal illnesses, or because they find the US health care system too complex, stressful, or discriminatory, which may have skewed the mean age of hospitalised Micronesians.

Either way, studies such as this are imperative to understand inequalities within populations and reinforce the need to find the root causes of these apparent health inequities so that governments can make informed decisions about healthcare and also decrease suffering. In a population challenged by language, economic and cultural barriers, policies that provide interpretive and navigational services, and affordable, culturally competent care, are needed.

As health is a human right, it is important to advocate for access to health and preventive services for those who are most sick – and it seems in Hawaii, this includes the Micronesian population. The findings of this study certainly bolster any arguments in favour of better access to health care in Hawaii for immigrants from COFA islands. Maybe the timing is right – with so much going on in the insurance space and with the US election looming, this type of information is the perfect tool to be used to influence political decision makers.

PrevPreviousAn evidence-based approach to tackling the burden of disease and injury: lessons from the recent AIHW Burden of Disease Study
NextThe cohealth pharmacy story: lessons from a successful community campaignNext