In doing so, the AMA has upped the pressure on the Australian Government to take action in a number of areas, calling on it to:

It has also issued a warning that climate change “will have the earliest and most severe health consequences on vulnerable populations around the world, including in Australia and the Pacific region”.

This follows bitter disappointment by Pacific leaders at last month’s Pacific Islands Forum at Australia insisting they watered down language on cutting carbon emissions and phasing out the use of coal.

The AMA’s announcement goes further than previous public statements on climate change and marks a significant shift from its public stance under former president Dr Michael Gannon who spoke out about the closure of Victoria’s Hazelwood power station, which critics said undermined evidence on the health impacts of climate change.

Doctors for the Environment Australia applauded the statement as a “major milestone that firmly acknowledges the toll that rising global temperatures is having on health as well as the urgency in addressing the climate crisis”.

Its decision to ring the alarm bell on climate change as a health emergency is a significant move that behoves our policy makers to turn off their blinkers and start taking an urgent re-evaluation of priorities and planning for climate adaptation and mitigation.

It’s critical that doctors speak out as we are on the front line of care: Our surgeries, emergency departments and clinics are the first port of call for patients suffering the impacts of climate change.” 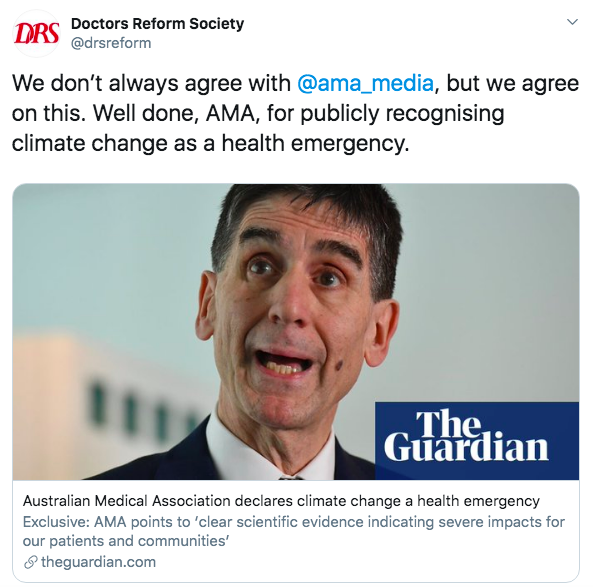 Last month, as this article from The Conversation reported, The New England Journal of Medicine declared the medical community must act now to limit the health effects of climate change, reminding its readers that hospitals, even airconditioned and sterilised, are not protected from “the environmental chaos unfolding outside”.

The effects of climate change are frighteningly broad, including risks to medical supply chains, health infrastructure and all aspects of human health.”

The call to action is being taken up by others in the health sector, with Australian GPs planning to participate in the Global Climate Strike on 20 September, marching for the first time under the banner of Health Strike 4 Climate.

Australia’s nurses too were urged last month to take action on climate and health, with the Australian College of Nursing’s National Nursing Forum hearing calls for urgent action to address the significant carbon footprint of the health care sector, which contributes around seven percent of Australia’s greenhouse emissions .

The Doctors Reform Society WA branch on Tuesday tweeted that the WA health department’s current inquiry into climate change and health was “a great opportunity to connect the dots between climate and health, and catalyse some important change!”.

Here is its submission.

Croakey will be raising more of these issues in the coming weeks as part of #CoveringClimateNow, a global media initiative to put a sustained focus on the climate crisis ahead of a landmark international Climate Action Summit in New York on 23 September.

Read here for how you can be involved, or you can support Croakey’s longer-term efforts to cover climate health by backing a crowd-funding campaign via the Patreon platform.

“The evidence is irrefutable”

The Federal Council recognises climate change as a health emergency, with clear scientific evidence indicating severe impacts for our patients and communities now and into the future. The AMA commits to working with government agencies and other organisations to prioritise actions in line with the AMA’s 2015 Position Statement on Climate Change and Human Health.

In today’s statement, AMA President, Dr Tony Bartone, said today that the evidence is in on climate change – and it is irrefutable. He said:

The AMA accepts the scientific evidence on climate change and its impact on human health and human wellbeing.

The scientific reality is that climate change affects health and wellbeing by increasing the situations in which infectious diseases can be transmitted, and through more extreme weather events, particularly heatwaves.

Climate change will cause higher mortality and morbidity from heat stress.

Climate change will cause injury and mortality from increasingly severe weather events.

Climate change will cause increases in the transmission of vector-borne diseases.

Climate change will cause food insecurity resulting from declines in agricultural outputs.

Climate change will cause a higher incidence of mental ill-health.”

Bartone said these effects are already being observed internationally and in Australia.

“There is no doubt that climate change is a health emergency,” he said, adding the AMA was proud to join the international and local chorus of voices urging action to address climate change on health grounds.

Here’s background provided by the AMA:

The AMA also highlighted earlier action by other medical and health groups: 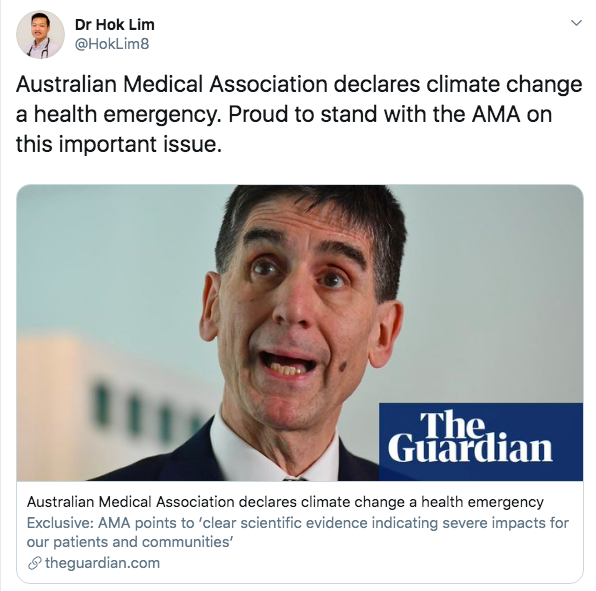 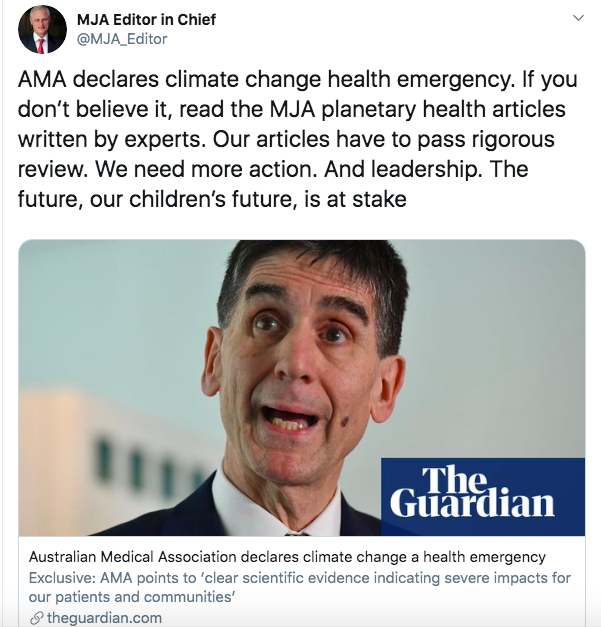 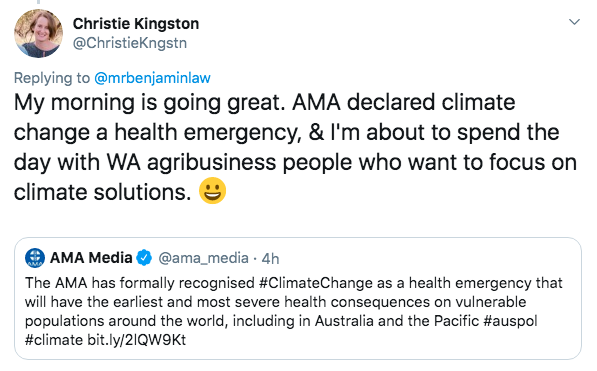 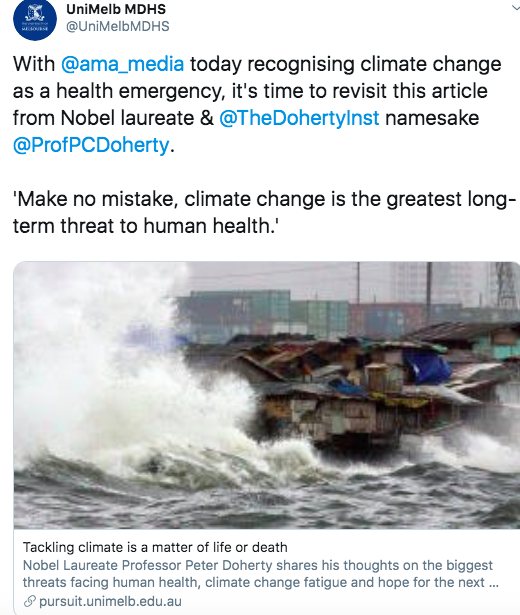 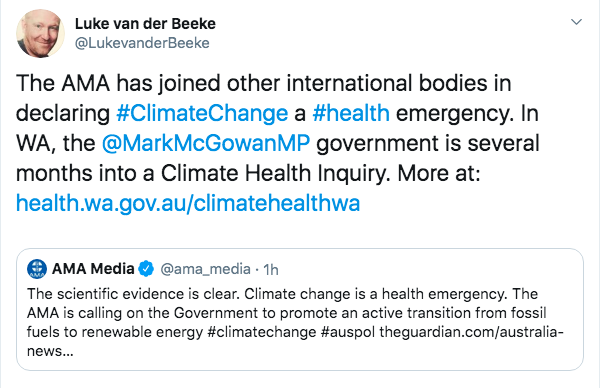