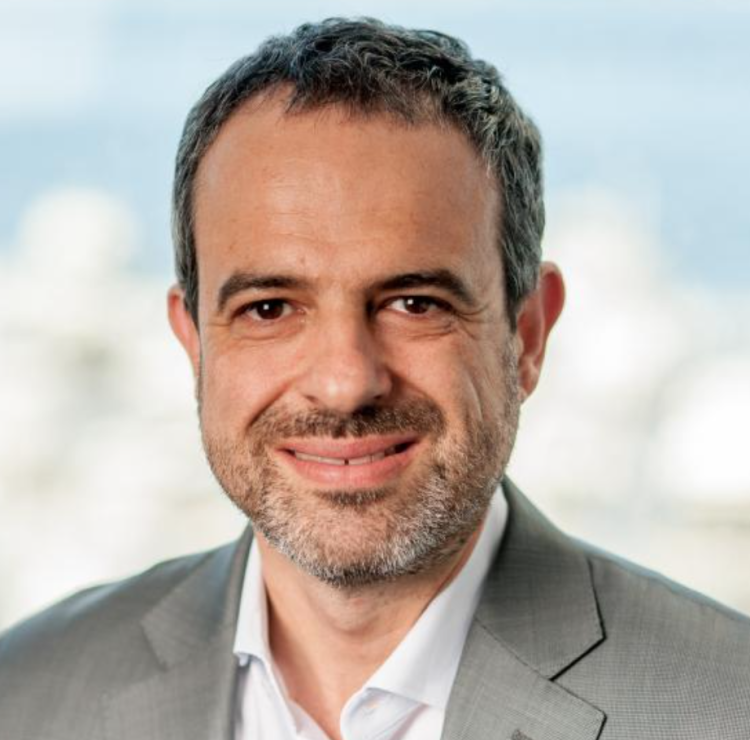 Australian Medical Association new leadership team – what does this mean for health policy?

The election follows the conclusion of the two-year term of President Dr Tony Bartone and Vice President Dr Chris Zappala.

What does this changing of the guard mean for the AMA and the medico-political landscape more generally?

This leadership change occurs at  a challenging time for the Australian Medical Association (AMA). Declining membership has dramatically reduced the organisation’s revenue. This has forced some tough decisions, such as selling the building which houses their national office in Canberra and significantly reducing staffing levels.

Many of the staff leaving the organisation are from the media and public health areas, including its longstanding and politically savvy Director of Public Affairs, John Flannery. The departure of Flannery and several members of his team is likely to have a significant impact on the AMA’s advocacy activities and its capacity for political engagement.

The AMA has typically undertaken two markedly different forms of advocacy. One is focussed on issues specific to private medicine, such as promoting the independence of the medical profession, protecting doctors’  freedom to set their own fees and arguing strongly against any involvement of government or third parties in medicine (apart from the provision of funding for these services via rebates and subsidies).

The second focus of the AMA’s advocacy has been on public health and social justice issues. These have varied according to the issues running at the time and the views of the current president but have included climate change, tobacco control, Aboriginal and Torres Strait Islander health and refugee rights.

Having a strong voice on issues of community concern has helped the AMA maintain its high public profile and media credibility and has minimised the potential for a community backlash against some of its blatantly self-interested positions.

Any change in this balance risks reducing this credibility and undermining the influence the AMA has previously had over government health policy and funding decisions. How this evolves will depend to a large extent on the views and priorities of the new leadership team.

While he has been active in the AMA for a number of years, having previously served on the Federal Council as well as his role in WA, he has not had a high public profile at a national level.

In a statement released after his election, Khorshid nominated the following issues as his priorities for his term:

As is apparent from these priorities, Khorshid is likely to lean towards the conservative side of politics, although would not be considered ‘hard right’. He is close to former WA-based AMA presidents, Dr Rosanna Capolingua and Dr Michael Gannon, both of whom were from the right

Compared with outgoing president Dr Tony Bartone, he is less likely to want a collaborative relationship with Government and can be expected to take a more combative stance on issues such as the  MBS Review and private health insurance. 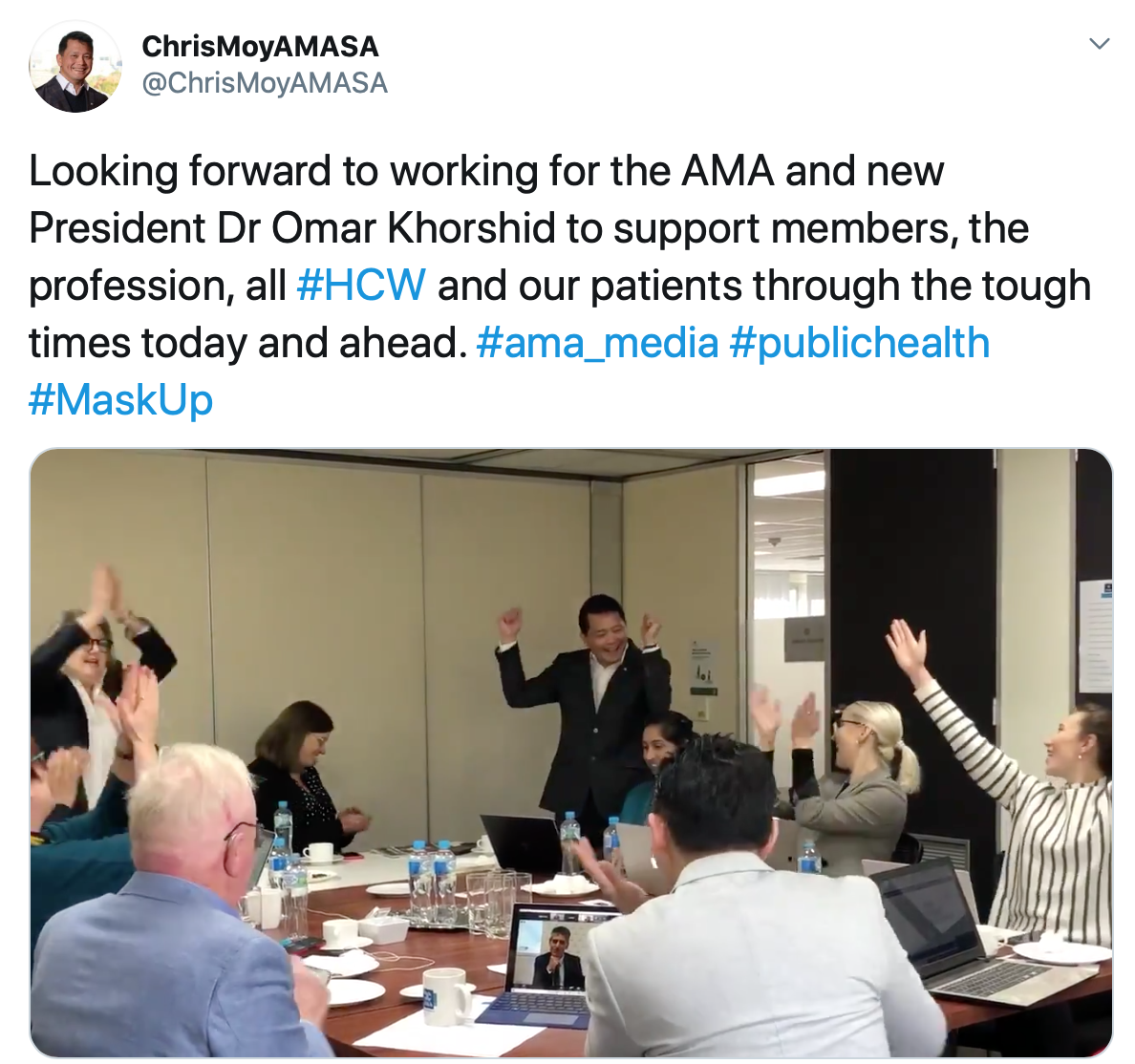 Dr Chris Moy is a SA-based GP who is a former President of the SA AMA, as well as Chair of the Federal AMA Ethics and Medico-legal Committee. His interests include aged care, palliative care, and health IT and communication systems and he has been a member of a number of key government advisory groups,  including Independent Advisory Committee on the Patient Controlled Electronic Health Record (PCEHR) and the My Health Record Operations Management Committee.

He is currently a Clinical Reference Lead for the Australian Digital Health Agency and a member of its Privacy and Security Advisory Committee. This experience will be valuable  in advocating  on telehealth issues, an important current priority.

While the priorities nominated by Khorshid mention broader issues, such as public health, climate change, and gender equity within medical leadership, initially he and Moy may have to focus internally on addressing the AMA’s current organisational challenges.

As stated above, these include declining membership, partly the result of a lack of engagement among younger doctors, and the consequent reduction in the organisation’s resources.

Khorshid and Moy will also have to address structural issues, such as re-establishing the AMA Federal Council as the peak decision making body for the organisation. In recent years the AMA has established a Board which is separate from Federal Council. Tension between two groups has caused problems and resolving this will be a high priority for the leadership team.

The need to focus on internal issues and the reduced capacity for advocacy due to downsizing create a vulnerable situation for the AMA.

While it has previously had a high public profile and has played a major role in shaping government policies, there is no guarantee this will continue.

The Government is not obliged to listen to the AMA – there is no contract or funding agreement between the AMA and the Government and indeed the AMA has always vigorously avoided any such arrangement.

This can be risky as it means that its influence is based solely on its ability to convince government of its relevance, rather than on any actual lever it can use to direct policy and funding decisions.

This ability rests largely on the media profile that the AMA has built up over time, which confers a high degree of visibility and credibility among the general public, AKA voters. Another key component is the latent threat posed by the AMA’s perceived ability to  instigate industrial action among the medical profession – a major deterrent for any government.

This approach has mostly worked for the AMA in the past but will be undermined by the falling  membership numbers and reduced capacity for media and advocacy.

Also relevant is the changing political landscape. The Government has a choice about which groups to listen to and there are an increasing number of other options in the health sector.

For example, the Royal Australian College of General Practitiioners (RACGP) has much higher GP membership than the AMA and a better history of collaboration with government. It would be the current preferred option for the government to engage on general practice issues.

Other medical colleges have developed more sophisticated and collaborative policy positions than the AMA on important health issues, such as mental health (the Australasian College for Emergency Medicine) and integrated care (the Royal Australasian College of Physicians).

The work of more broadly-based and cross-sectoral health organisations, such as the Australian Healthcare and Hospitals Association, provide a more comprehensive vision for the health system than that offered by the AMA.

The risk the AMA runs by pursuing its narrow, doctor-centric agenda is that it will be marginalised from other health groups and write itself out of meaningful engagement on health reform.

The new leadership team will also find it difficult to convince the government to hand over the sort of funding they want in the current challenging budgetary environment. This will add to the pressure on membership and is likely to further reduce doctor engagement with the organisation.

There is much uncertainty in the current political and health environment, but one thing is clear – a difficult road lies ahead for the AMA with both internal and external pressures challenging its position as the pre-eminent voice for the medical profession.

PrevPreviousThe Health Wrap: detailed update on coronavirus vaccine development, aged care and oral health – and an inspirational woman
NextCalling for patient and family voices to be at the forefront, and especially during the pandemicNext