AMA not happy about Coca-Cola’s health-washing letter to doctors: it won’t happen again

It’s not news that globally the junk food and drink industry is on a health-washing campaign as part of efforts to avoid regulatory pressure and maintain profits (see this 2010 article on the industry’s tactics from the US-based Centre for Media and Democracy’s PR Watch.)

What is surprising, perhaps, is that the Australian Medical Publishing Company (AMPCo) – a fully owned subsidiary of the AMA – enabled Coca-Cola’s most recent health-washing campaign. As the AMPCo website states:

AMPCo Data Direct owns Australia’s most accurate and comprehensive lists of doctors, hospitals, pharmacies, and other health professionals and institutions. It rents or licences these lists so people and organisations can communicate with doctors and other health care professionals. AMPCo Data Direct also has expertise in direct mail processing, databasing and fulfilment services.

To have AMPCo sending out this letter to doctors was not a good look for the AMA or its public health campaigning (Click on image for larger version). 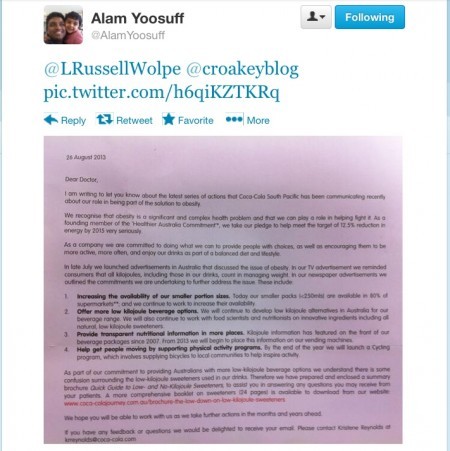 But it seems this is now something of a collector’s item – that Coca-Cola won’t be sending any more letters to health professionals via AMPCo.

After a few doctors raised concerns about the letter on Twitter last week, Croakey sought a response from the AMA. It follows.

Meanwhile, other organisations continue to assist Coca-Cola’s health-washing – like this group, Exercise is Medicine (an initiative of Exercise and Sports Science Australia), and, as previously reported at Croakey, Bicycle Network Victoria.

Thanks to Canadians Meghan Telpner and Yoni Freedhof for drawing Croakey’s attention to their previous work on Coca-Cola’s healthwashing efforts.

Freedhof, a family doctor and Assistant Professor at the University of Ottawa, wrote in 2010 about the Exercise is Medicine group and its role in serving “its founding sponsor Coca-Cola, in the promotion of the assertion that the best means to deal with our current obesity epidemic is to ensure that people exercise. Or to put it another way, that sugary soda’s not a bad thing so long as you live an active lifestyle….”

Telpner, a Toronto-based nutritionista, also adds some historical perspective, noting that Coca-Cola has a long history of marketing based on “health” claims.

In this clip she compares the tactics of the tobacco industry and Coca Cola (see also the screen grab below). 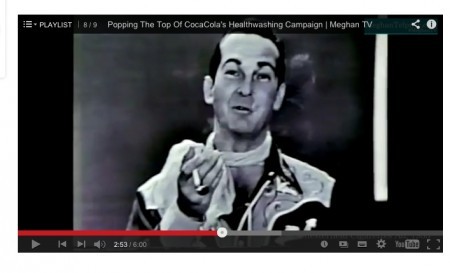