Australian Medical Association president Dr Michael Gannon has been accused of a ‘wilful distortion’ of AMA climate health policy over comments he made to Guardian Australia about the closure of the Hazelwood coal fire power station in Victoria last week.

Former AMA vice president Dr Stephen Parnis, who unsuccessfully contested the AMA presidency last year and led the AMA’s 2015 climate change and health policy review, said he was “taken aback” to read Gannon’s comments, which he said “sounded like a press release from the Minister for Energy’s office” rather than official AMA policy.

Guardian Australia last week reported Gannon as saying the health benefits of closing down brown-coal power plants like Hazelwood need to be considered against the health impacts of unemployment and blackouts.

Parnis immediately expressed his anger at Gannon’s comments in a tweet, saying:

Hard to believe AMA policy is being given such an appalling spin. Talk about clutching at straws!

On Sunday he was asked for his response at the annual national meeting of Doctors for the Environment Australia in Melbourne on Sunday. Watch his comments here.

He delivered a stinging rebuke, saying:

“I think Dr Gannon’s comments were a wilful distortion of the AMA policy and it could be read, I certainly read it that way, as trying to put a handbrake on the health benefits of what was a commercial decision to close Hazelwood power station.

I have some hesitation in saying that, but I think that it it was a distortion, a misrepresentation of the AMA policy of which I remain very proud.”

Parnis reminded delegates he had been AMA Victoria president in 2014 when “hundreds and hundreds of people sought medical care” when a fire at the Hazelwood mine burned for 45 days, sending smoke and ash over the nearby town of Morwell.

He said the ongoing health impacts of that fire were still being measured and would need to be for years to come. While there was no doubt that unemployment and energy security were important factors, they should not be put ahead of the health impact over decades of Hazelwood, he said.

Parnis spoke to the power and influence of the AMA, saying that “as far as Canberra goes, the AMA is the only game in town” when it comes to representing the voice of the medical profession in Australia. And that, he said, brought a responsibility to speak with authority, impartiality and effectiveness.

“When you are the loudest medical voice in the country you have an obligation to respect the evidence and you need to deliver the message that is a reflection of your organisation’s policy and not what would have sounded like a press release from the Minister for Energy’s office.”

As to be expected, Parnis was not the only one at the conference angered by Gannon’s comments, with a number of delegates raising them in various sessions.

You can watch this Croakey interview below too with Associate Professor Grant Blashki from the Nossal Institute of Global Health, and a Melbourne GP, who said he had told the AMA he did not want to pay his membership fees in the wake of Gannon’s comments.

Guardian Australia reported Gannon on Sunday as saying he was aware of complaints from AMA members in response to his remarks, and that neither he nor the AMA equated the loss of jobs at Hazelwood with the environmental and health benefits that would come from its closure.

“The AMA is one of the leading advocates on the issue of climate health,” he said. “It’s just that the AMA has a global view on all of these issues, and I think we can walk and chew gum at same time.”

He tweeted this response to the report: 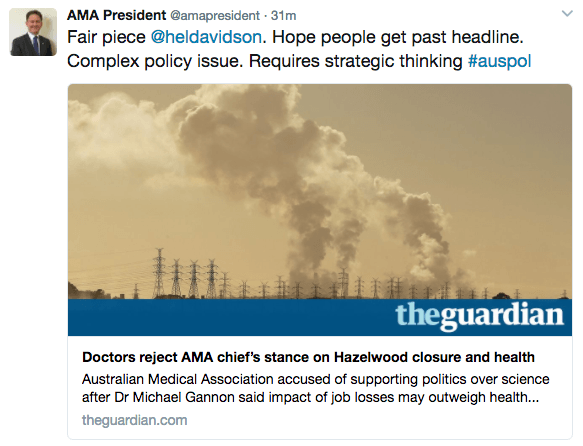 You can also read this post at Croakey about other issues raised at the conference. 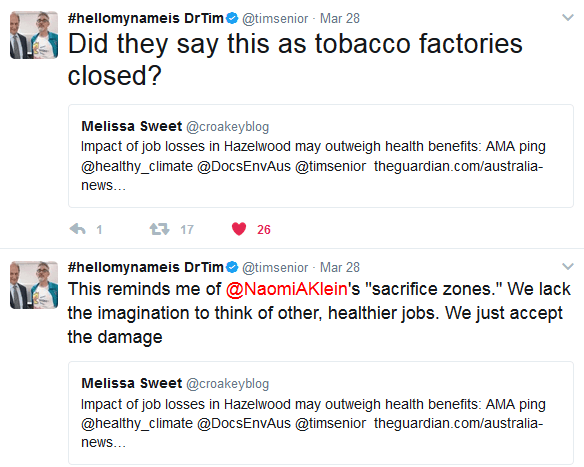 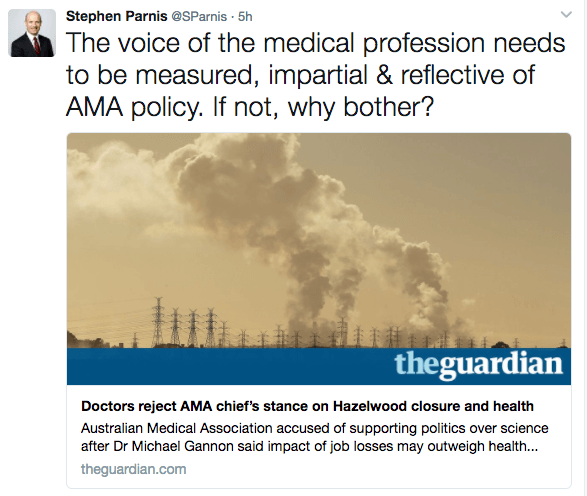 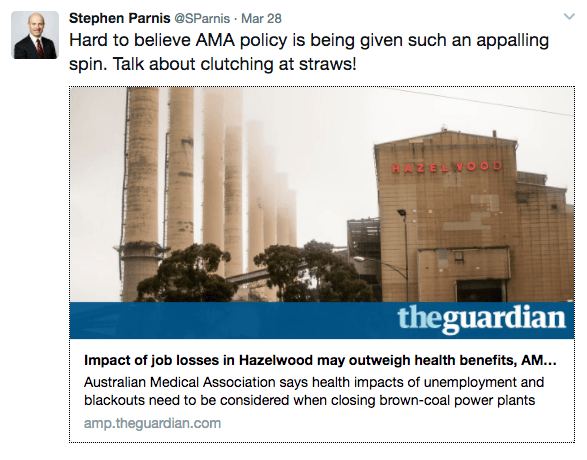 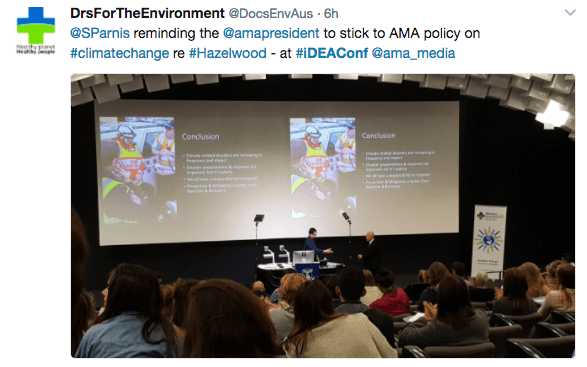 PrevPreviousWhat can doctors do to better address climate health impacts? A quick glance at the iDEA conference
NextStop using drug policy as a political tool – a message to the Federal GovernmentNext