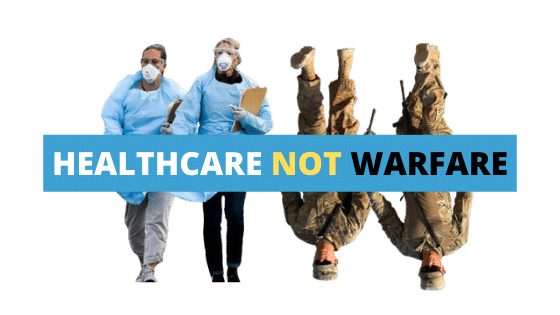 Amid and beyond COVID-19, it’s time to focus on healthcare not warfare

Introduction by Croakey: On top of a call earlier this week for more than $US90 billion to protect the world’s poorest nations during and after the coronavirus pandemic, the United Nations’  Humanitarian Chief, Mark Lowcock, has launched a US$6.7 billion appeal and an updated global plan to fight coronavirus in fragile countries.

The expanded appeal was launched at a virtual event involving the UN, World Health Organization, Oxfam America, World Food Program, and the UN High Commissioner for Refugees. You can watch it in full here.

Also this week, Australian Treasurer Josh Frydenberg warned in an expansive speech to the National Press Club that, after the coronavirus crisis is resolved, Australia will face a higher debt burden that will take many years to repay.

He said we should address this via values and principles “that have guided Coalition reforms in the past must guide us again in the future” – encouraging personal responsibility, maximising personal choice, rewarding effort, and risk taking whilst ensuring a safety net which is underpinned by a sense of decency and fairness.

But the Australian Government, and nations across the globe, could also look to dramatic reductions in military spending which last year came in at $1,917 billion, says Sue Wareham, President of the Medical Association for Prevention of War (Australia).

If there’s one service that most people on the planet want, it’s healthcare when we need it.

Healthcare is a basic human right, and reminds us that we humans have common interests and common needs. It should be a global priority, not only now but in the post-COVID world.

And yet data released on 27 April from the Stockholm International Peace Research Institute (SIPRI) indicate a world heavily focussed on warfare, the antithesis of healthcare.

SIPRI reported that global military spending last year was $1,917 billion, which represented the largest annual increase since 2010. On nuclear weapons alone – the capacity for us to destroy ourselves – the economic cost globally is over $100 billion annually.

The lost opportunities for health from profligate military spending are vast. In July 2017, the WHO estimated the SDG Health Price Tag – the cost of achieving key health targets in the Sustainable Development Goals in 67 low- and middle-income countries. The estimated costs were an initial US$ 134 billion annually, increasing over time to $371 billion annually by 2030 – less than a fifth of current global military spending.

For these sums, targets would be reached by 2030 in SDG 2 (zero hunger), SDG 3 (healthy lives and well-being for all), SDG 6 (clean water and sanitation) and SDG 7 (affordable and clean energy). That represents a major reduction in human suffering, and healthier and more resilient communities in the world’s poorest places.

The benefits of prioritising health and healthcare are not just for people elsewhere, although the latter should matter to us – not least because, as we well know, health threats can spread rapidly on this small interconnected planet.

There would be huge benefits for Australians if health were consistently a top priority here also.

Sydney GP Dr Richard Nguyen wrote in The Guardian last week not only of the lack of personal protective equipment currently for frontline workers, scandalous in itself, but also more chronic problems that undermine good practice.

A short list of healthcare problems that need fixing would include the appalling waiting times for public outpatient clinics and elective surgery, the lack of timely and affordable dental care for many, gross underfunding of aged care, over-stretched mental health services, especially for those who are particularly vulnerable, inadequate access to drug rehabilitation services, and the unmet needs of rural and remote communities.

Also needed is greater attention to preventive health, and a serious look at the risk factors for ill-health, such as homelessness and the inadequate provision of housing, which is particularly relevant for indigenous communities.

Whether one’s primary concern is the relief of human suffering or the loss of productive labour, these many gaps in our healthcare should be addressed. Each of them represents Australians needlessly carrying a burden of ill-health.

Meanwhile Australia’s military spending skyrockets, with over $200 billion for military hardware planned over the decade to 2028-29, over and above the annual defence budget.

While St Vincent’s Hospital in Melbourne had to appeal to the public for emergency funds recently for new ventilators and other supplies, no such measures are needed by the weapons industry; the funds just flow and keep flowing.

The estimated lifetime cost of building and maintaining our 12 new submarines has reached a staggering $225 billion.

The weapons industry appears to be positioning itself to play a leading role in Australia’s COVID recovery, deceptively spruiking the “jobs” argument.

Peter Jennings, director of the Australian Strategic Policy Institute, which is part-funded by the industry but curiously calls itself “independent”, wrote recently of the need for Australia to invest in “nation-building sovereignty-enhancing defence capabilities”. His comments were a thinly-veiled call for us to prepare for war with China – a monumentally bad prospect that must be avoided.

Employment is certainly important for a healthy society, but evidence indicates that military spending is one of the least effective ways to create it. Brown University in the US reports that clean energy and healthcare spending create 50 percent more jobs than the equivalent amount of spending on the military, and education spending creates more than twice as many jobs.

On 23 March, the UN Secretary General António Guterres’ appealed for a global ceasefire to help combat the COVID pandemic, citing the ravages of war in destroying health systems and displacing vulnerable people.  Many people around the world are supporting his call.

In Australia, the Medical Association for Prevention of War has identified steps that Australia could take in promoting healthcare not warfare, and  IPAN, the Independent and Peaceful Australia Network, is inviting support for its statement.

Prioritising health and healthcare would not only mean more jobs and timely access to healthcare for millions of Australians and others who currently miss out. It would also necessarily focus our attention in the post-COVID world on the two biggest global health threats, nuclear weapons and climate change.  Preventive action on both is urgently needed.

COVID has reminded us of the importance of global cooperation, not confrontation, in the interests of health. That focus must remain post-COVID. It would save us a lot of money too, SIPRI reminds us.

Dr Sue Wareham is President of the Medical Association for Prevention of War (Australia) and a board member in Australia of ICAN, the International Campaign to Abolish Nuclear Weapons. She was formerly in general practice in Canberra.