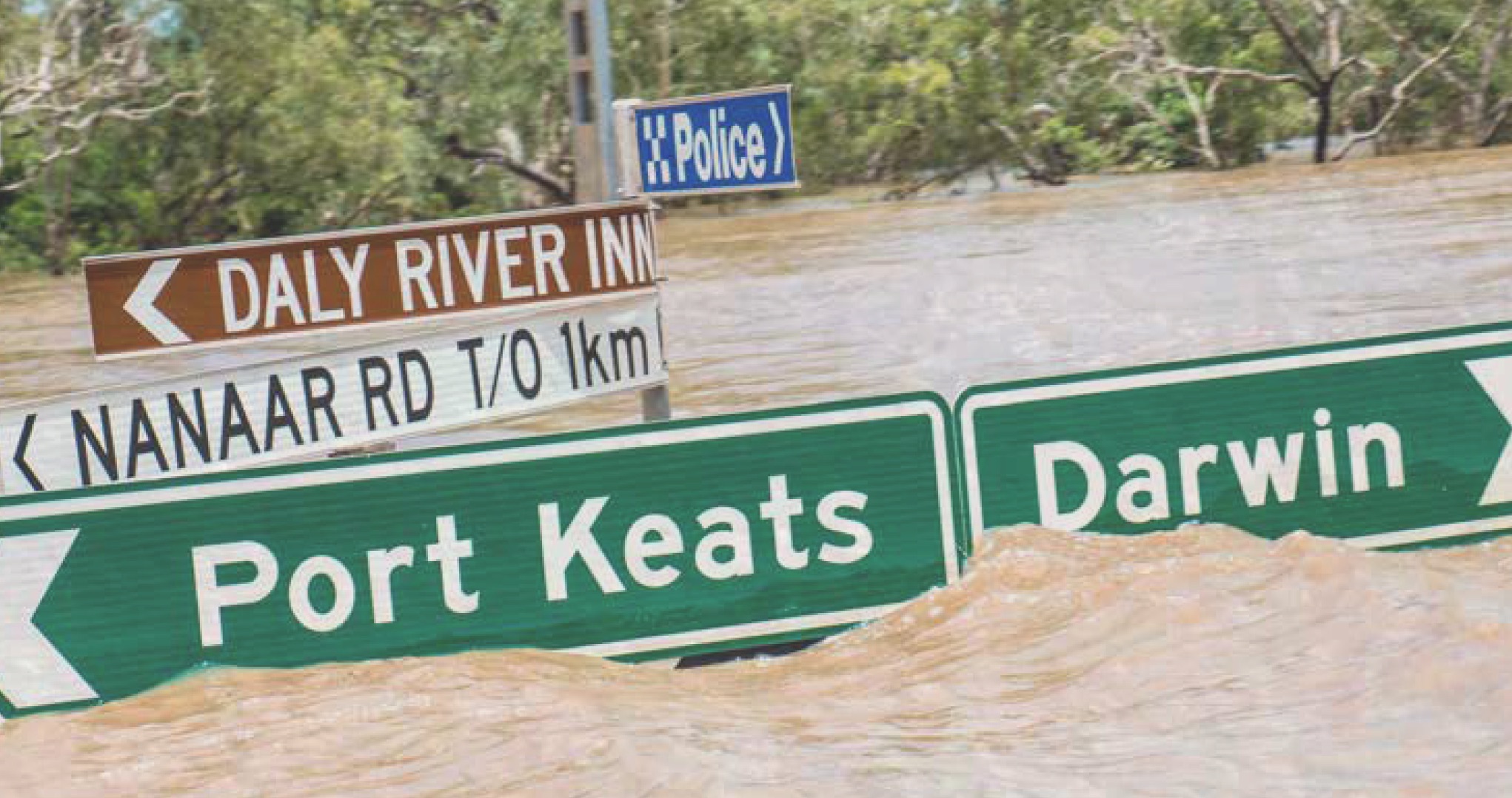 Amid fires and floods on the east coast, how should the NT respond to climate change?

As fires rage across Tasmania and Victoria, and catastrophic floods deluge Townsville in north Queensland, doctors have urged the Federal Government to treat climate change as a “health emergency” in the wake of record January temperatures.

Meanwhile, health and environmental groups are urging the Northern Territory Government to act urgently on climate change to mitigate the health impacts, especially for Aboriginal people and remote communities.

Submissions to the development of a NT climate change strategy call for the participation of Aboriginal people in climate responses, and for consideration of climate change risks to be mandated across all policies, Melissa Sweet reports below.

Aboriginal health groups have called on the NT Government to implement a zero net carbon emissions target by 2050, and urged the Territory to consider climate change in all policies.

The Aboriginal Medical Services Alliance NT (AMSANT) said it supported the development of Aboriginal-driven enterprises that support the NT’s transition to a low carbon economy, such as carbon farming and abatement, harvesting of native bush foods and medicines and opportunities in renewable technologies.

The AMSANT submission said Aboriginal people – who make up 30 percent of the NT’s population – must be a key stakeholder in climate policies, and that “the resilience of Aboriginal people and the ability of this group to offer solutions to climate change mitigation and adaptation should not be underestimated”.

In planning for the future in an environment of climate change we make the point that it will be critical that Aboriginal people are included as key partners at all levels in this process.

It will also be important that where Aboriginal knowledges and understandings are used to mitigate against and adapt to climate change that Aboriginal people receive equitable benefits from this information and knowledge sharing.”

AMSANT said climate change should be considered “an integral part of general business” and proposed that a “climate risk (including risk to human health) in all policies” approach be implemented.

Their submission warned that climate change will increase the social health gradient, meaning that the health outcomes of the most disadvantaged populations will get even worse relative to other socioeconomic levels.

They highlighted the inequity of projected climate change impacts on those NT Aboriginal people with poor living conditions, and said “those who contribute least to climate change will be among the most affected and will potentially have the least capacity to mitigate and adapt to these changes”.

AMSANT urged the NT Government to ensure climate responses balanced planning for the Territory as a whole with providing a regional focus, given significant regional variations in climate, exposure to types of climate risk and access to resources.

…from the tropical North to the arid dry South and intermediate zones, it will be important that what the NT puts in place is not overwhelmed by strategies appropriate for other more populated climatic conditions that are promoted by a dominant national Australian discourse.”

Like many submissions, AMSANT said the exploitation of NT gas reserves is incompatible with effective climate action.

AMSANT stressed that approaches to planning, coordinating and implementing climate change mitigation and adaptation activities must be strengths-based: “It is just as important to build on existing strengths of individuals and communities to mitigate against and adapt to climate change, as it is to address potential vulnerabilities.”

Submissions outline wide-ranging health impacts of climate change for Territorians, from infectious diseases to food and water insecurity, and the mental health impacts of displacement and extreme weather events.

AMSANT and others cited predictions that the frequency of extreme heat days (above 35 degrees C) would significantly increase in Darwin to 275 days per year by 2100, and would also increase in Central Australia.

This would lead to heat stress in residents of many remote communities as many homes lack basic necessities such as running water, adequate plumbing and functional power sockets.

Heat stress can lead to dehydration, lethargy, inactivity, which can in turn exacerbate chronic diseases such as diabetes, cardiovascular disease and in particular renal disease, which is so rampant among Aboriginal people in the NT.

AMSANT also called for the primary healthcare workforce to be trained on the health impacts of climate change and for further research on climate change impacts to health and appropriate adaptation strategies, with a focus on Aboriginal populations.

“For NT urban and remote Aboriginal communities, development, training and upskilling of the local Aboriginal Health Practitioner workforce and support and broadening of Aboriginal Community-controlled Health Services is the only viable means of meeting the increased demands of health in the NT Aboriginal population.”

A submission by the Arid Lands Environment Centre highlighted a lack of research into the ways remote and very remote communities will be impacted by climate change, and said that a research priority should be investigating the ways in which people have responded to historical changes to understand inherent resilience.

The Centre said remote communities may also be highly resilient to climatic extremes and environmental change because of adaptation to resource scarcity and variability.

“Supporting communities to stay on country and care for country is one of the most effective ways to improve adaptive capacity,” the Centre said, calling for Indigenous ranger programs to be expanded and supported with committed long-term funding.

The Central Australian Aboriginal Congress submission said the Aboriginal conception of health includes the social, emotional and cultural well-being of the whole community and the relationships between families, communities, land, sea and spirit.

“The disruption of the living world that climate change creates is therefore in itself a harm to the health of Aboriginal communities,” it said.

Congress said the NT Climate Change Strategy should include a commitment to a target of net zero emissions by 2050, which would require:

Through our diverse cultures, Aboriginal peoples have cared for and sustainably regulated the natural ecosystems of this continent for tens of thousands of years.

However, the process of colonisation in Australia has profoundly undermined our ability to care for Country.

The deregulated non-Aboriginal economic system and its unrestrained pursuit of profit is now causing irreparable damage to the living systems that sustain life in the Northern Territory, across Australia, and around the world.”

Meanwhile, the Central Land Council called for the development of a robust evidence base on how remote communities will adapt to climate change, relying on mainstream and traditional knowledge, and for communities to be empowered to identify and implement their own responses to climate change.

The CLC said the strategy’s development was a key opportunity to promote Aboriginal leadership of and participation in sustainable industries, including carbon farming, bush food harvesting, as well as in the supply of new infrastructure such as renewable energy:

While planning for climate change adaptation in Central Australia poses challenges, it also provides an opportunity to recognise and draw on the knowledge which has enabled Aboriginal people to adapt to changing climatic conditions over millennia.

Aboriginal knowledge is increasingly being recognised as essential to addressing complex environmental problems and this policy provides an opportunity to engage meaningfully with remote communities about climate change impacts.”

The CLC said climate change will continue to impact ecosystems, species, landscapes, livelihoods and health, as well as fundamental relationships that are interrelated with cultural landscapes, with significant consequences for Aboriginal people’s capacity to maintain their connection to country and practice traditional law and culture.

The relationships that Aboriginal people have to their traditional land and waters is placed at risk especially where they are unable to negotiate their land management priorities.”

The Council said Aboriginal people can make a significant contribution to carbon abatement through land management activities-particularly through fire management.

Meanwhile, a submission by the Indigenous Carbon Industry Network said it is estimated that by 2020, Indigenous carbon projects across northern Australia have the potential to abate over 3.2 million tons of carbon dioxide equivalent each year, provide 600-1100 part-time or casual jobs for Indigenous land managers, generate around $40 million each year (at an average of $12/tonne) and deliver significant additional environmental outcomes.

The submission said the Indigenous carbon industry is an important vehicle for Indigenous people seeking to work on their traditional lands, providing a pathway to more job opportunities and training whilst maintaining important connections to family, community and country. The industry generates revenue for Indigenous ranger groups and land owners across northern Australia.

The Jesuit Social Services submission called for reinstatement of the moratorium on fracking, and noted that current policy settings have the NT on a trajectory to increase rather than decrease emissions.

Greenhouse gas emissions have risen 28 per cent over the last 10 years and will continue to rise due to the INPEX Ichthys project, the opening up of the Territory to gas fracking, new land clearing permits, and increased offshore gas processing.

There is widespread recognition that Indigenous knowledge and land and water management practices hold a key to our response to climate change and our ecological future. Aboriginal knowledge and practices must be recognised, respected and paid for.”

The Foundation said the NT had been a world leader in the carbon economy through Indigenous-led savannah burning, which has provided economic opportunities for reducing atmospheric carbon, and said there are growing opportunities for economic development related to carbon sequestration including native plant food industries, reforestation, hemp industries, sustainable agriculture and carbon neutral hydrogen production.

• Read more from the submissions here.

• On related themes, on the importance of Indigenous knowledge and leadership, read this recent article by University of Canberra researchers Bradley Moggridge and Professor Ross Thompson: Aboriginal voices are missing from the Murray-Darling Basin crisis.