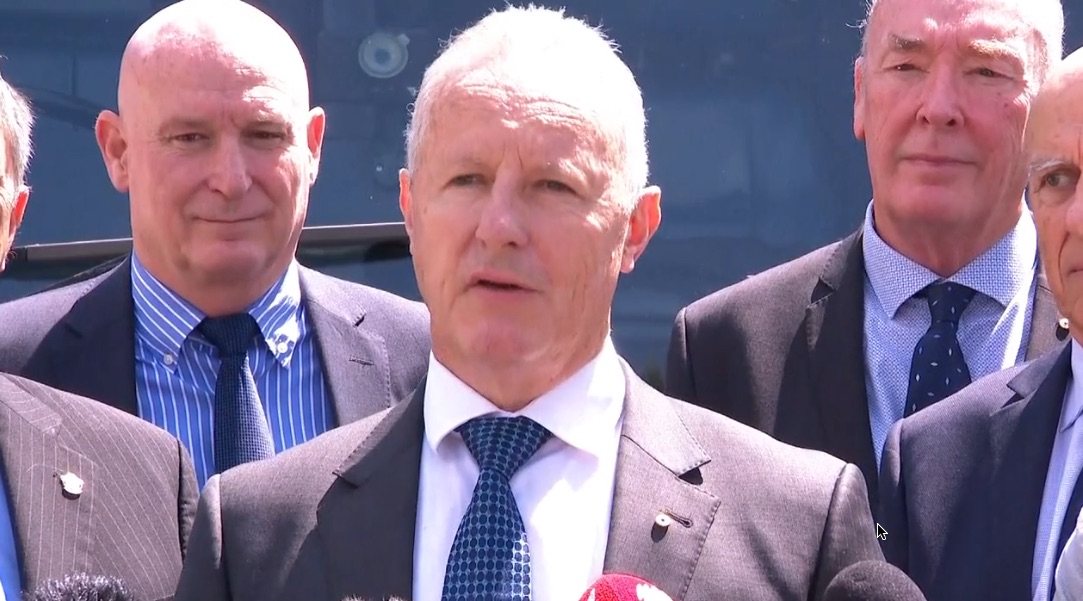 Greg Mullins addresses the media on a "leadership vacuum"

Amid “leadership vacuum in Canberra”, health and emergency leaders call for urgent action on a public health emergency

Introduction by Croakey: Six weeks after an early start to the bushfire season launched an unprecedented public health emergency affecting millions of people, the Health Minister Greg Hunt, other health portfolio ministers  and the Federal Health Department are yet to issue a single public statement on the crisis.

Nor have federal health authorities responded to a joint call from 27 health and medical groups for the Federal and NSW Governments to act on the health threat from hazardous air pollution caused by bushfires burning across the state.

The joint statement, from groups including the Consumers Health Forum of Australia, the Australasian College of Health Service Management, and the Australian Institute of Health Innovation, calls on Prime Minister Scott Morrison and NSW Premier Gladys Berejiklian “to demonstrate the leadership this public health emergency demands, and to implement measures to help alleviate the health and climate crisis”.

However, the response of governments to the statement has been “a deafening silence”, according to Fiona Armstrong, the executive director of the Climate and Health Alliance. Meanwhile, widespread outrage about the Prime Minister’s overseas holiday had #WhereTheBloodyHellAreYou trending on Twitter today.

The joint statement also calls for a multi-portfolio response involving federal and state governments and the development of a National Strategy on Climate, Health and Well-being, to ensure health service planning for climate change addresses increasing demand for health services from extreme weather events, such as bushfires and heatwaves.

Meanwhile, Emergency Leaders for Climate Action plan to hold a National Bushfire and Emergency Summit next year, to bring diverse sectors together, to discuss the unprecedented conditions faced by emergency services, funding and resourcing issues, and ways to address the fundamental driving factor: climate change.

In the article below, Joseph Cuthbertson, a Perth-based member of the Public Health Association of Australia, calls for coherent policy responses across all sectors to address climate change, reduce population vulnerability and prepare and resource health and emergency response organisations.

As the events of recent weeks highlight all too clearly, the frequency of natural disasters is increasing and the effects of these events result in a public health crisis of the affected populations.

Findings from the 2017 Lancet Countdown on Health and Climate Change report noted a 46 percent increase in the frequency of weather-related disasters since the year 2000. It stated that the burden of deaths associated with disasters caused by natural hazards predominantly affects poorer countries.

The latest MJA–Lancet Countdown on Health and Climate Change provides an Australian assessment on progress in tackling climate change, and notes a yawning lack of policy action (as reported at Croakey).

Still, the Federal Department of Environment has recognised the increasing risk to the built and natural environments related to increasing frequency and intensity of extreme weather events, which is identified in the National Strategy for Disaster Resilience.

Australia is feeling the effects of these changes as bushfires sweep across New South Wales and Queensland well before the traditional start of the bushfire season.

With the problem so well-known, it’s frankly disappointing that at the Commonwealth level there has been no public, strong leadership to coordinate a comprehensive response – one that centres Australian lives and the natural environment that underpins our life support systems.

Further, Australia’s traditional reaction to disasters has focussed heavily on response. Once those responses are over, the underlying vulnerabilities of the communities often remain.

As climate change increases the frequency and severity of extreme weather events and disasters, we must increase our focus on prevention and preparedness.

Even if all governments tackled climate change with gusto tomorrow, the reality is that the problem has already taken hold. And as former NSW Fire and Rescue Commissioner Greg Mullins has warned, “we are not adequately prepared”.

The MJA Lancet report urges Australia to move from over-investment in post-disaster reconstruction and more investment in mitigation, to preventative policies that limit the impact of natural disasters in the first place.

To improve outcomes of the health impacts of disasters, actions are required to reduce exposure to hazards, decrease vulnerability of people and property, improve management of land, the environment, and preparedness for adverse events.

Recognising that climate change is a mainstream health issue is step one.

The World Health Organization’s Risk Reduction and Emergency Preparedness Strategy for the health sector and community capacity development reflects the recommendations of a global consultation organised by the Health Action in Crisis cluster.

This strategic framework signals a shift from traditional, short-term focused emergency management doctrine to one of capacity building, developing resilience and reducing vulnerability.

The challenge in achieving this goal as described by the strategic framework, is ‘establishing systematic capacities, such as legislation, plans, coordination mechanisms and procedures, institutional mechanisms and budgets, skilled personnel, information and public awareness and participation that can measurably reduce future risks and losses’.

This strategy recognises the importance of applying a ‘whole of health’ approach, and utilises the WHO definition of health as the benchmark for intervention effectiveness. This strategic direction complements efforts in other areas, notably the agenda for Sustainable Development, and the Sendai Framework endorsed by the United Nations.

A preventative public health approach to extreme weather and fires requires long-term thinking and resources. Just as we have learned with smoking (people don’t die today from smoking tobacco but they likely will in future), what happens today has impacts well into the future. This summer’s intense fires will have ripple effects.

We need a Ministerial Health and Climate Change Forum consisting of Commonwealth and State/Territory Ministers with responsibility for Health, Environment and Energy and many other portfolios as no area is untouched by climate change.

The National Strategy for Disaster Resilience was developed as a framework for shared responsibility of governments, business and communities in preparing for, and responding to, disasters. Further promotion and enabling of the strategy to guide improvement in risk mitigation and planning is urgently needed to protect Australian communities. It could be used in tandem with the climate health framework developed by the national coalition of health groups, the Climate Health Alliance.

For health care workers, the impacts of fires are taking a toll.

Heatwaves in Australia have caused more deaths than all other natural hazards combined, and place additional stress on a health care system.

Vulnerable populations including the elderly, those living with disadvantage and those with chronic disease are expected to suffer the greatest harm from increasing severity and frequency of heatwaves and have been shown to present in higher rates at Australian emergency departments due to heat related stress.

Coherent policy across all sectors is required to address climate change, reduce population vulnerability and prepare and resource health and emergency response organisations in a coordinated and effective manner.

PrevPreviousWhen we move beyond our usual silos, what solutions can we find to low-value healthcare?
NextCroakey Health Media statement: Where is the vision for sustainable public interest journalism?Next