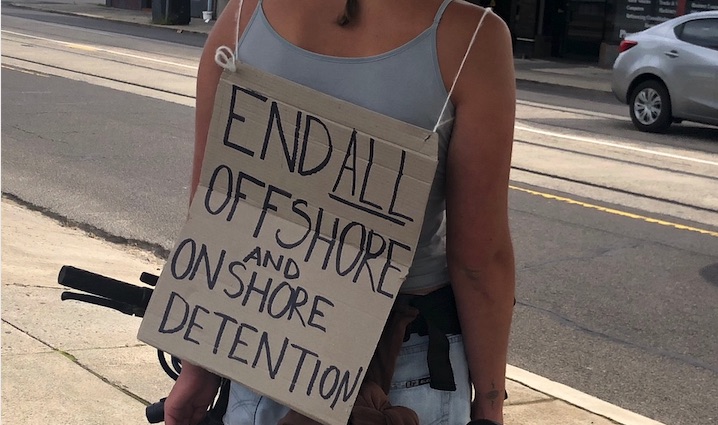 Amid pandemic concerns for detainee safety, can this legal action save lives?

A chronically ill refugee who is being held in detention in Melbourne has taken action in the High Court against Minister Peter Dutton and the Department of Home Affairs alleging they have breached their duty of care to protect him from contracting COVID-19.

The legal challenge has been filed by the Human Rights Law Centre in response, it says, to Australia’s failure to act on serious coronavirus risks for asylum seekers and refugees and others in detention – in contrast with measures taken in the United Kingdom, Belgium, Spain and Portugal.

If successful, it is expected to spark a wave of similar cases across Australia, with more than 1,400 refugees and asylum seekers held in detention centres or other facilities, including dozens of refugees detained in hotels in Melbourne and Brisbane after being brought from Manus and Nauru for health care under short-lived “Medevac” laws.

The case could also have implications for similar concerns for the “ticking timebomb” that coronavirus poses for prisoner health and wellbeing.

At the very least, it underlines the lack of independent medical oversight over the conditions in which asylum seekers and refugees are being held, after the former Abbott Government scrapped the Immigration Health Advisory Group (IHAG).

Medical groups have long urged a restoration of the independent panel of experts to provide much needed transparency and accountability on health issues for detainees.

Former IHAG member Professor Louise Newman told Croakey on Wednesday that state governments should launch their own investigations into whether detention facilities are abiding by state laws and directions intended to control the coronavirus pandemic.

Asked whether it was incongruent that police were laying charges, for example, against young people gathering to play video games  if they were not investigating clear public concerns about how asylum seekers and refugees are being held, she said:

Yes, it is nonsensical and suggests that certain people are seen as outside the restrictions necessary to preserve life. Care applies only to some.”

“I don’t want to die in detention”

The High Court challenge has been filed on behalf of a yet unnamed refugee who was medically transferred from Manus Island to Australia for treatment in early 2019 and is being held in detention in Melbourne.

Lawyers will seek orders that Dutton not detain the man in conditions where he cannot practise physical distancing, such as sharing a bedroom and bathroom.

“The man has a number of underlying health issues including asthma, a heart condition and diabetes that place him at increased risk of severe illness or death if he contracts COVID-19,” the Human Rights Law Centre said in a statement.

Refugees and asylum seekers have been sounding the alarm about the conditions they are being held in across Australia since wide-sweeping social distancing restrictions were put in place in order to suppress COVID-19. They told Prime Minister Scott Morrison in an open letter earlier this month that they are “sitting ducks” for the coronavirus.

Two detainees held in Adelaide, Riaz Hussain and Zijah Haider, told Croakey  they feel “totally unsafe”, sharing confined space with around 25 other asylum seekers and with a high rotation of security guards, kitchen hands and other staff.

“I don’t want to die in detention,” Hussain said. “It will take only one person to bring that virus here and turn it into an incubator.”

Detainees who came to Australia via the Medevac program have been mounting silent protests from their windows and balconies where they are being held in detention at the Mantra hotel in Melbourne and at Kangaroo Point Central Hotel in Brisbane. They are also pressuring for action online and via the media.

They say they are being held in cramped conditions, often living two or three to a room, eating communally and facing a significant daily rotation of staff. 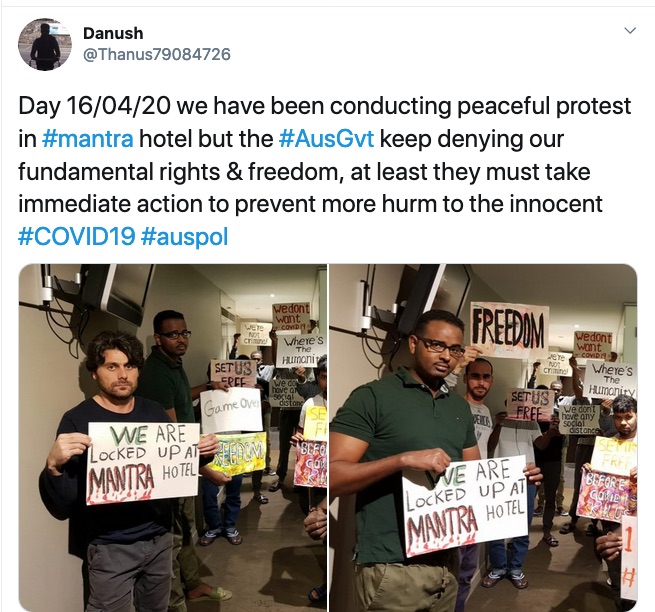 Hundreds of other people who remain in immigration detention centres around the country are often sleeping in rooms with up to six people, eating in crowded food halls, and sharing bathrooms, according to the Human Rights Law Centre.

The Centre’s warning that detention centres “risk spreading COVID-19 like cruise ships” resonated with the news that almost all of Singapore’s worrying second wave of infections were linked to dormitories housing foreign labourers.

Reuters also reported this week that the coronavirus has swept through a hostel in the Portuguese capital Lisbon, infecting 138 of 175 asylum seekers housed there.

The Australian Government has made reassurances that no detainees in immigration detention facilities have tested positive to COVID-19, and that infection control plans are in place, notwithstanding its own departmental advice that detention centres are “high risk” facilities. 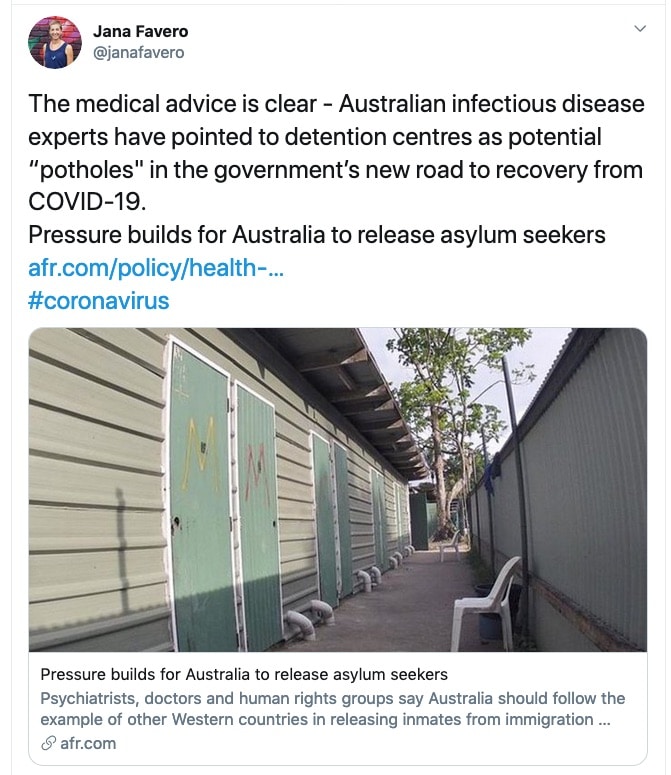 The Australasian Society for Infectious Diseases (ASID) and the Australian College of Infection Prevention and Control (ACIPC) released a statement last month on the risks to staff and detainees, as well as the broader Australian community.

Both the Royal Australasian College of Physicians and Royal Australian and New Zealand College of Obstetricians and Gynaecologists (RANZCOG) have spoken out, as has Australian Human Rights Commissioner Edward Santow, who said the often-crowded conditions in detention facilities “make physical distancing almost impossible”.

The Royal Australian and New Zealand College of Psychiatrists (RANZCP) last week stepped up its concerns on this “public health issue of the first order”, calling for the “urgent release” of vulnerable refugees and asylum seekers “as part of Australia’s public health response to COVID-19”.

It said the issue is affecting an already traumatised population, many of whom suffer from other complex and chronic physical conditions such as asthma, chronic obstructive pulmonary disease (COPD), respiratory illness and auto-immune diseases, “which put them in the high risk category for COVID-19.”

Médecins Sans Frontières (MSF) is equally concerned that the coronavirus is exacerbating the mental health toll already experienced by refugees and asylum seekers still in Nauru and those now in Port Moresby (formerly held on Manus Island, off Papua New Guinea).

As international borders close due to the COVID-19 pandemic, resettlement processes are suspended for asylum seekers and refugees held on Nauru and PNG, causing additional mental health distress for this already traumatised group of people.”

The RANZCP also raised concern about oversight of the detention centre, an issue for many health groups since the dismantling of the IHAG, which was set up by the Howard Government in response to the investigation into the detention of Cornelia Rau.

“We have concerns about the transparency around the regime of testing currently in place for COVID-19 and the medical oversight of protection measures for those in detention, especially those at high risk of acquiring the virus,” RANZCP President Associate Professor John Allan said.

Macquarie University Law Professor George Newhouse, CEO of the National Justice Project, shares these concerns, saying it is now  “almost impossible” to know what’s going on inside immigration detention centres unless whistle-blowers are able to speak up.

Asked whether or not detention centres or facilities are doing what is required under COVID19 guidelines, Newhouse told Croakey:

The bottom line is we don’t know.

I’m certain the Department of Home Affairs has a contingency plan and policies, but how it is implemented and what kind of medical care individuals are getting in immigration detention remains a secret and is not subject to any meaningful oversight.

The only way we find out about the conditions of detainees is when human rights groups take the Government to court and expose the unhealthy conditions in which people are being warehoused.”

Newhouse, who has backed the High Court action taken by the Human Rights Law Centre, said it is likely to be a test case, “the first of many cases, until the Government addresses overcrowding, lack of proper medical services, and unhygienic conditions”.

The action follows frustration and concern from many health and human rights bodies that their warnings have met largely with silence from the Federal Government, says Professor Newman, who is Director of the Centre for Women’s Mental Health at the Royal Women’s Hospital and Professor of Psychiatry at the  University of Melbourne.

She too is concerned about a “volatile” situation for people who already have fragile mental health.

While conditions vary across the country, on the whole detainees are living in environments where “it is virtually impossible to maintain distancing, short of putting people in solitary confinement and we would certainly advise against that given these are people with high levels of vulnerability, whose mental health will only deteriorate,” she said.

As a frontline worker in the coronavirus pandemic, Newman says her temperature is taken twice a day and, under protocols, would be tested if she shows any symptoms.

Yet she said there is no transparency about what precautions are taken with security and other staff at detention facilities, including in the hotels holding Medevac refugees, who have reported their panic about staff showing flu-like symptoms.

“We need to check whether that’s happening in hotels, detention centres or prisons,” Newman said, adding that it would be “very appropriate” if state governments launched inquiries into whether their coronavirus standards and directions “are actually being followed”.

While there are important questions about the adequacy of COVID-19 control in detention facilities, she said the bigger question is about whether they should be in detention at all.

“Is this necessary, is it doing more damage and exposing people to undue risk?” she asked. “If anyone is liable for this in the future, it would be government”.

Other countries are acting to support asylum seekers.

Portugal announced last month that all foreigners with pending applications will be treated as permanent residents until at least July 1, to ensure their access to the national health service, welfare benefits, bank accounts, and work and rental contracts during the pandemic.

In mid-March, New York City Mayor Bill de Blasio announced that hospitals would not ask for migration status documentation, amid worries that undocumented migrants would be too scared to seek treatment.

These sorts of issues are critical also in Australia, where thousands of asylum seekers and refugees living in the community lack access to basic income support and health care.

The UK has also passed a set of measures, including stopping evictions and an extension of support for asylum claimants and a temporary suspension of “assisted voluntary return”.

That shift came in response to legal action, according to Professor Michelle Foster and Katie Robertson of Melbourne Law School’s Peter McMullin Centre on Statelessness, who wrote in a prescient article on Australia’s legal and humanitarian obligation to protect people in immigration detention during the COVID-19 crisis.

They said the Australian Government also should consider itself on notice for similar court proceedings if it doesn’t act swiftly:

Like the UK, it too owes people in detention a legal duty of care to ensure their safety.” 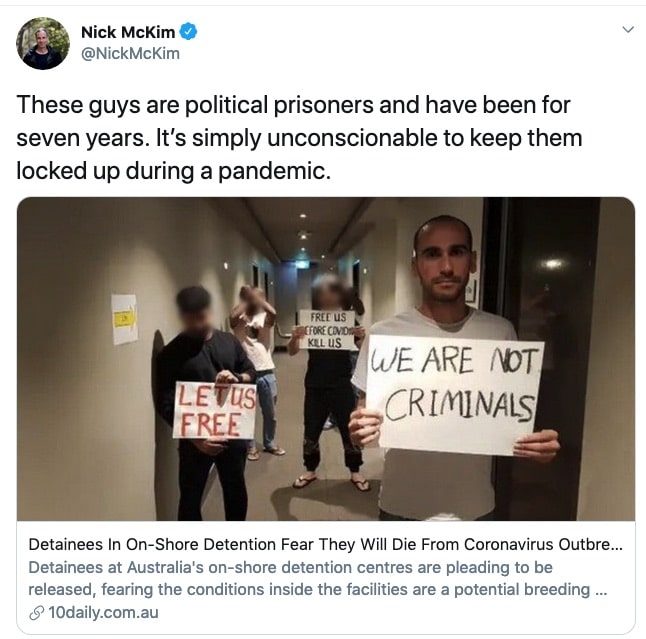 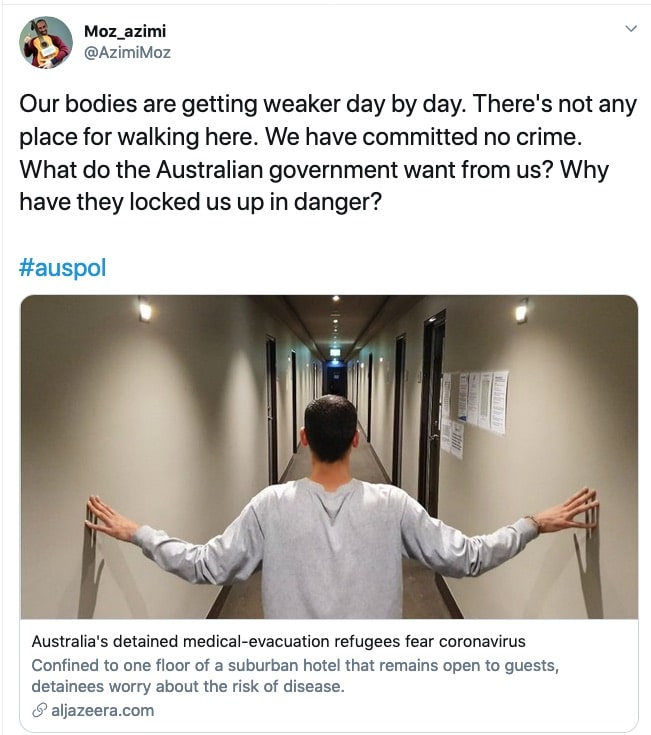 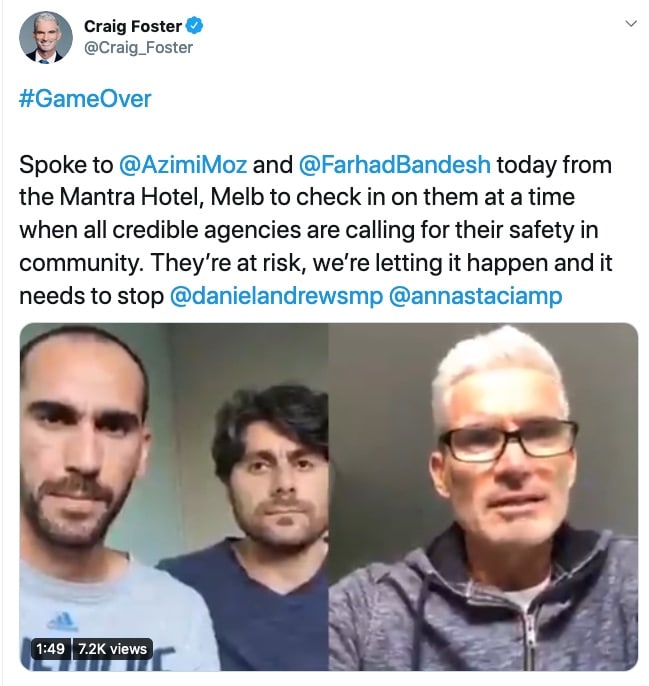 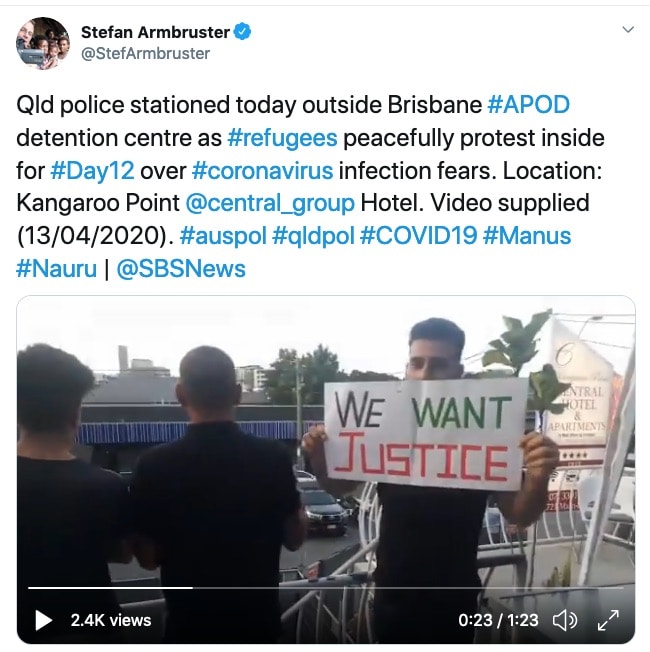 Watch a UNHCR clip on refugees and the pandemic.