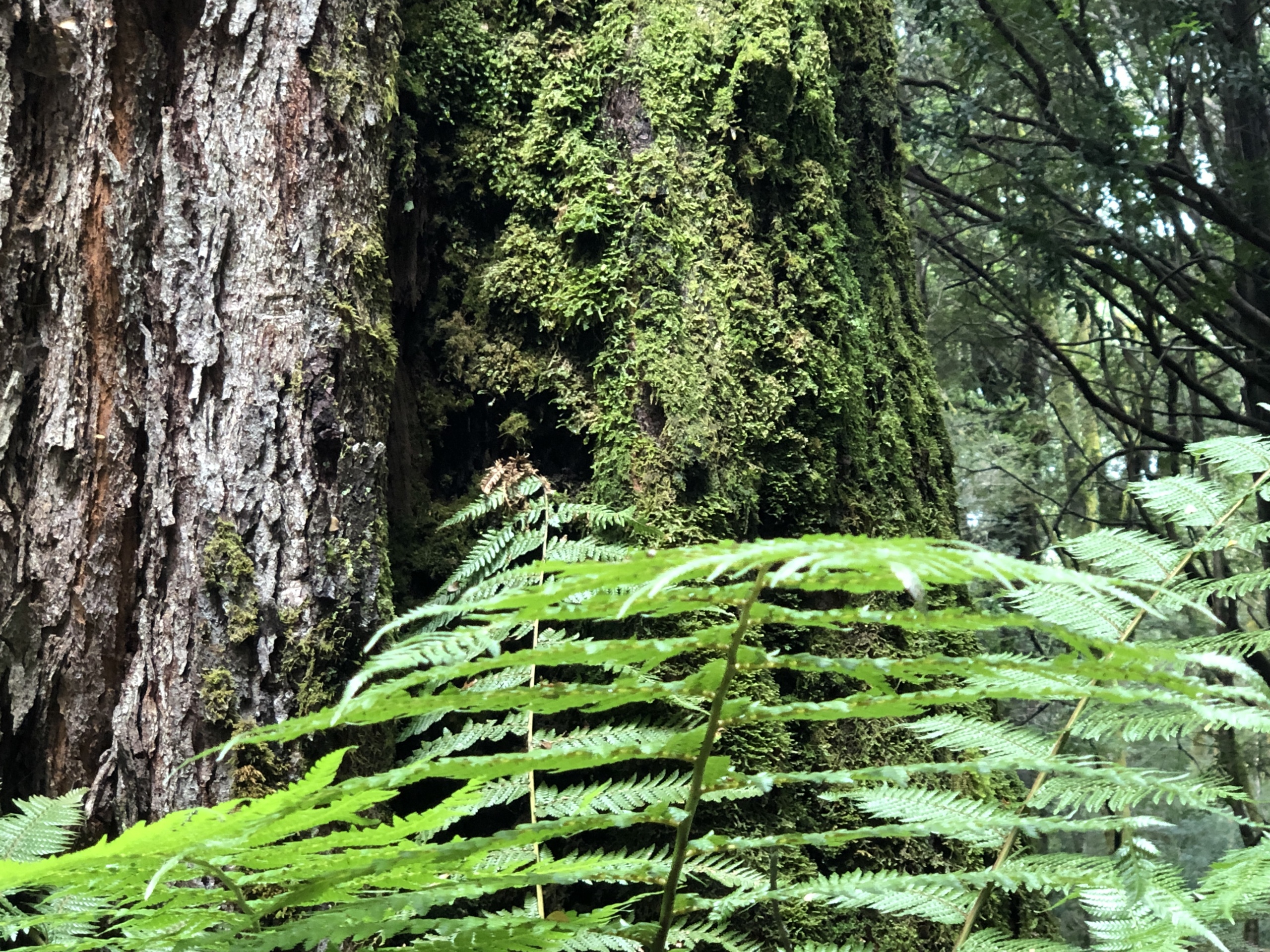 Biodiversity under threat in takayna/Tarkine rainforest. Photo by Mitchell Ward

As a global summit on biodiversity opens in Montreal, in the two related articles below we report on powerful calls for governments to stop the destruction of nature, while doctors in lutruwita/Tasmania urge the Federal Government to protect globally significant takayna/Tarkine rainforest.

Humanity, with our “bottomless appetite for unchecked and unequal economic growth”, has become “a weapon of mass extinction”, the head of the United Nations has warned.

In a powerful speech opening a global summit on biodiversity, UN Secretary-General António Guterres said multinational corporations “are filling their bank accounts while emptying our world of its natural gifts” and that “ecosystems have become playthings of profit”.

He called for COP15 delegates to produce a Global Biodiversity Framework that “beats back the biodiversity apocalypse by urgently tackling its drivers – land and sea-use change, over exploitation of species, climate change, pollution and invasive non-native species”.

Such a framework should address the root causes of the destruction of nature, he said, nominating these as harmful subsidies, misdirected investment, unsustainable food systems, and wider patterns of consumption and production.

Rather than waging war on nature, humanity needed to declare peace, and he said this requires governments to take three concrete actions:

First, governments must develop bold national action plans across all ministries, from finance and food, to energy and infrastructure. These should re-purpose subsidies and tax breaks away from nature-destroying activities towards green solutions like renewable energy, plastic reduction, nature-friendly food production and sustainable resource extraction. They should recognise and protect the rights of Indigenous peoples and local communities, who have always been the most effective guardians of biodiversity. As well, National Biodiversity Finance Plans should help close the finance gap.

Second, the private sector must recognise that profit and protection must go hand-in-hand. That means the food and agricultural industry moving towards sustainable production and natural means of pollination, pest control and fertilisation. It means the timber, chemicals, building and construction industries taking their impacts on nature into account in their business plans. It means the biotech, pharmaceutical and other industries that use biodiversity sharing the benefits fairly and equitably. It means tough regulatory frameworks and disclosure measures that end greenwashing, and hold the private sector accountable for their actions across every link of their supply chains. And it means challenging the relentless concentration of wealth and power by few that is working against nature and the real interests of the majority. Businesses and investors must be allies of nature, not enemies.

Third, developed countries must provide bold financial support for the countries of the Global South as custodians of our world’s natural wealth.
We need a mechanism that can ensure developing countries have more direct, simpler, and faster access to much-needed financing. We know all too well the bureaucratic hurdles that exist today. International financial institutions and multilateral development banks must align their portfolios with the conservation and sustainable use of biodiversity. As a global community, we need to stand with all countries as they protect and restore their ecosystems following decades and centuries of degradation and loss.

Guterres said Nature is humanity’s best friend. “Without nature, we have nothing. Without nature, we are nothing. Nature is our life-support system. It is the source and sustainer of the air we breathe, the food we eat, the energy we use, the jobs and economic activity we count on, the species that enrich human life, and the landscapes and waterscapes we call home.”

The UN News reports that the conference is expected to lead to the adoption of a new Global Biodiversity Framework, and it is hoped this framework will have a more lasting impact than the previous version: at COP10, in 2010, governments agreed to strive for ambitious targets by 2020, including halving natural habitat loss, and implementing plans for sustainable consumption and production.

However, a UN report showed that not a single target had been fully met. Meanwhile, the planet is experiencing its largest loss of life since the dinosaur era ended: one million plant and animal species are now threatened with extinction.

According to a report in The Guardian, Environment Minister Tanya Plibersek is launching a Biodiversity Council, a scientist-led thinktank based at the University of Melbourne. 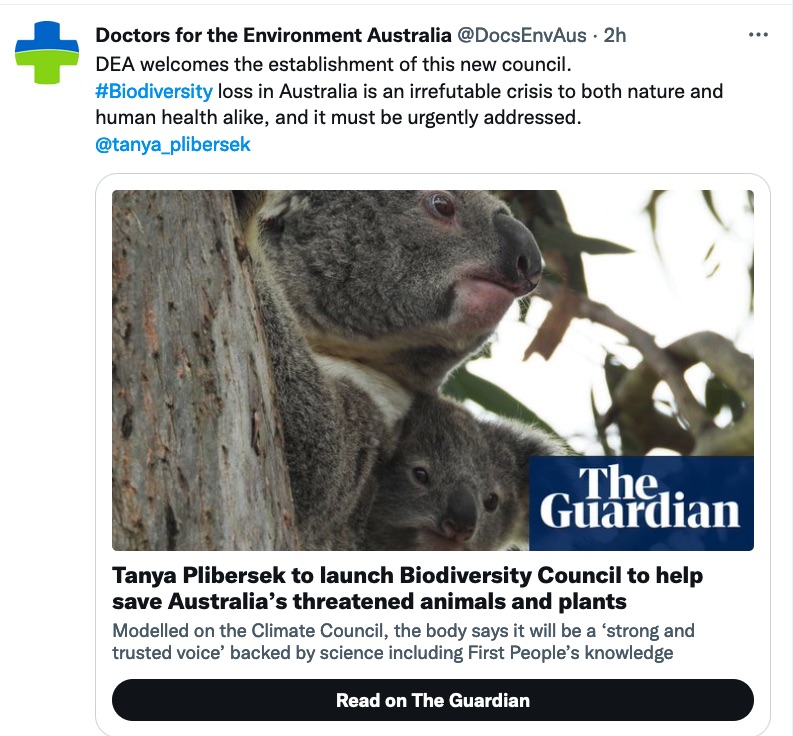 Meanwhile in the article below, four doctors based in lutruwita/Tasmania call for Plibersek to protect globally significant takayna/Tarkine rainforest in the state’s north-west (read more about campaigns to protect these area here).

As doctors in Tasmania, we urge the Minister to take immediate action to stop the construction of a tailings dam in takayna for a range of health reasons. In the medical profession, we are critically aware of evidence linking climate change to a significant decline in human health.

It makes no sense to destroy hundreds of hectares of pristine carbon-absorbing native forest for a polluting dam when the single most effective climate action Tasmania should take now is to cease native forest logging.

We were among 250 doctors and medical students who in 2020 signed an open letter to the Tasmanian Premier calling for an end to native forest logging based on health concerns. This position aligns with our Hippocratic Oath, our most profound undertaking as medical professionals:  “first, do no harm”.

Since our letter, the United Nations Intergovernmental Panel on Climate Change has declared a ‘Code Red for humanity’, indicating we are at a crossroads. We still have time to act, but only just.

What instead do we see?  Nonsensical governmental inaction at state and federal levels, inaction that escalates threats to human health in Tasmania and beyond.

And what a natural environment is takanya! The region meets seven of 10 possible criteria that would make it eligible for World Heritage-listing. The vast cool temperate rainforest is one of the most carbon-dense forests known to humanity – and the value of that cannot be overstated at this moment in history. In what kind of world does a government endorse the destruction of an estimated 350 football pitches of wilderness in a climate emergency for a company’s short term profit?

Globally climate change is already responsible for countless deaths from a variety of causes, and what we are beginning to see is just the melting tip of an iceberg. Climate change’s higher temperatures, more extreme weather events and increasing frequency and severity of bushfires present obvious direct risks to human life.

But with each event comes a wave of indirect negative impacts. Bushfires, for example, exacerbate many diseases including asthma, emphysema, heart attacks and strokes, along with severe psychological distress. The hidden death toll from the Black Summer bushfires of 2019-20 stands at more than 400, mostly from the effects of smoke inhalation.  Increasing rates of anxiety, depression and post-traumatic stress disorder (PTSD) in young people – who DO understand the urgent need for climate action – can be partly attributed to their despair at inadequate response by Governments to the crisis.

Our concerns over climate change are shared by many of our representative organisations including the Australian Medical Association and Doctors for the Environment.

Minister, please say no to the dam to protect our forests and their important carbon stores as a public health priority for our future.

For more information on COP15

All sessions will be streamed live at cbd.int/live and see the main schedule.

The Conversation: COP15: three visions for protecting nature on the table at the UN biodiversity conference

Reuters Explainer: COP15: Why the world needs a new deal to protect nature

PrevPreviousChild protection systems are failing Aboriginal and Torres Strait Islander children, but this report has some solutions
NextICYMI: calling for pre-budget submissions, justice matters, global health and calling out greenwashingNext