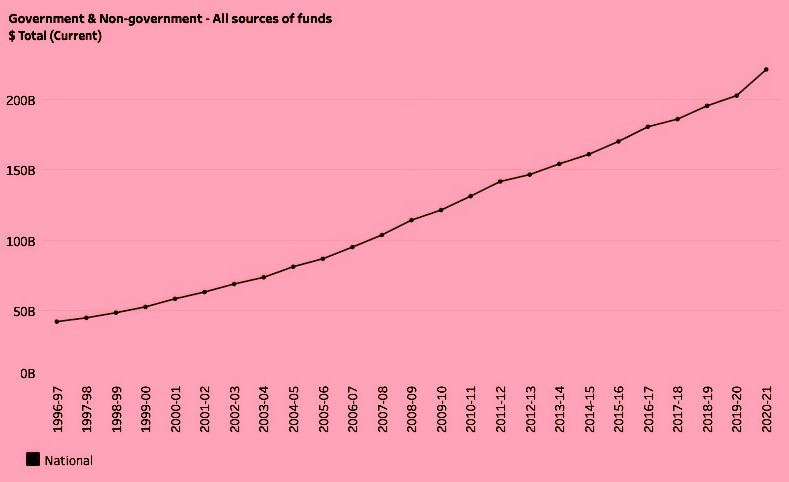 No-one should be surprised by this, he adds, as an expanding and ageing population means that “every year of health spending should be a record.”

The latest Australian Institute of Health and Welfare health expenditure publication was released on Wednesday 23 November, providing detailed tables covering the three years from 2018-19 to 2020-21.

As the AIHW notes, it covers the first full year of spending under the COVID-19 pandemic. While the Institute’s accompanying media release focuses on comparisons of 2020-21 with the previous year, it is perhaps more interesting to draw comparisons with 2018-19 as the last “normal” (pre-COVID) year.

This is particularly true of patterns of expenditure by different funding sources, rather than the overall pattern of spending on different health sub-functions.

In terms of total spending, 2020-21 was of course another record year. No surprises here – given an expanding and ageing population, every year of health spending should be a record, even without a pandemic.

Pandemic spending accelerated the rate of increase in 2020-21 from a ten-year post-inflation average of just under 3.5 percent to just over seven percent. However, this growth followed the historically very low growth of only 1.5 percent in 2019-20. As a result, total spending in 2020-21 was only 1.3 percent higher than the level of spending implied by the long-term trend.

Compared with 2018-19, total health spending in 2020-21 had increased by 8.6 percent in real terms. This was almost all due to increased government expenditure (+12.3 per cent), while private sector expenditure increased by only 0.7 per cent. 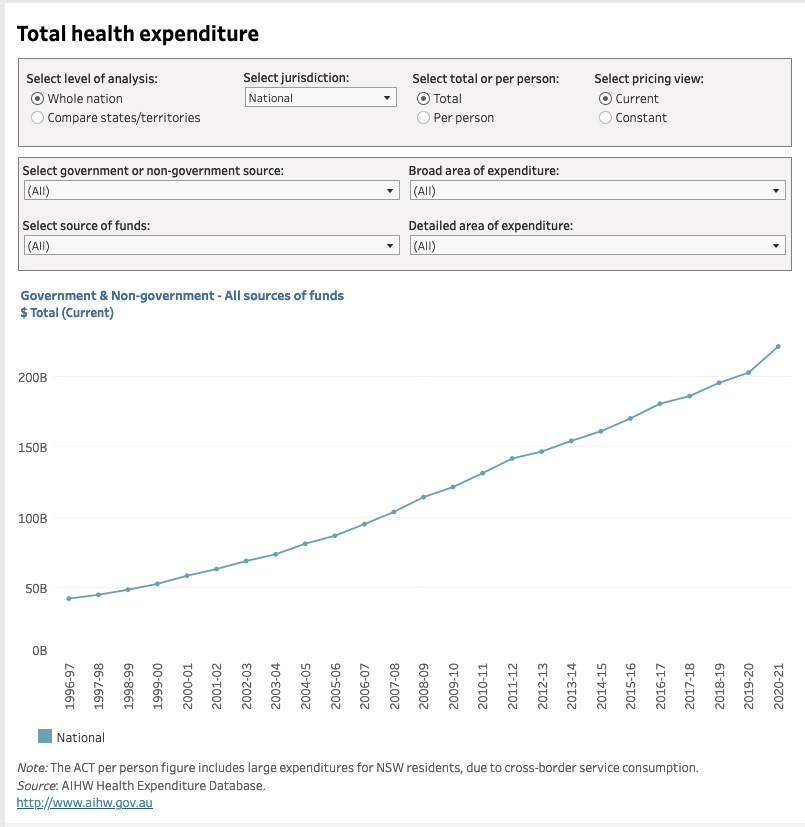 The largest increase by sub-function was (unsurprisingly) in public health, where spending increased by 170 percent from a little under $3 billion in 2018-19 to a little over $8 billion. The Commonwealth Government increased its spending almost 2.5 times, while the states more than doubled theirs.

In relation to public hospitals, private patient revenue declined by almost 15 percent between 2018-19 and 2020-21, reflecting the decline in elective surgery.

However, the really interesting point regarding public hospitals is the change in the share of total funding met by the Commonwealth and the states. In 2018-19 the Commonwealth met 43.0 percent of combined government funding (excluding veterans and private health insurance premium rebates).

In response to the pandemic, the Commonwealth agreed to a minimum hospital funding guarantee – effectively continuing to fund the states as if hospital activity had not declined during the pandemic – as well as a National Partnership Agreement (NPA) to pay half the cost of COVID-19 related hospital activity.

But despite these initiatives the Commonwealth’s share of combined hospital funding in 2020-21 declined to 42.4 percent.

This is because the states increased their public hospital funding by 12.2 percent over the two years, while Commonwealth funding only increased by 9.5 percent, notwithstanding the guarantee and the NPA.

No wonder the states are pursuing an extension to the NPA and revisions to the hospital funding arrangements. 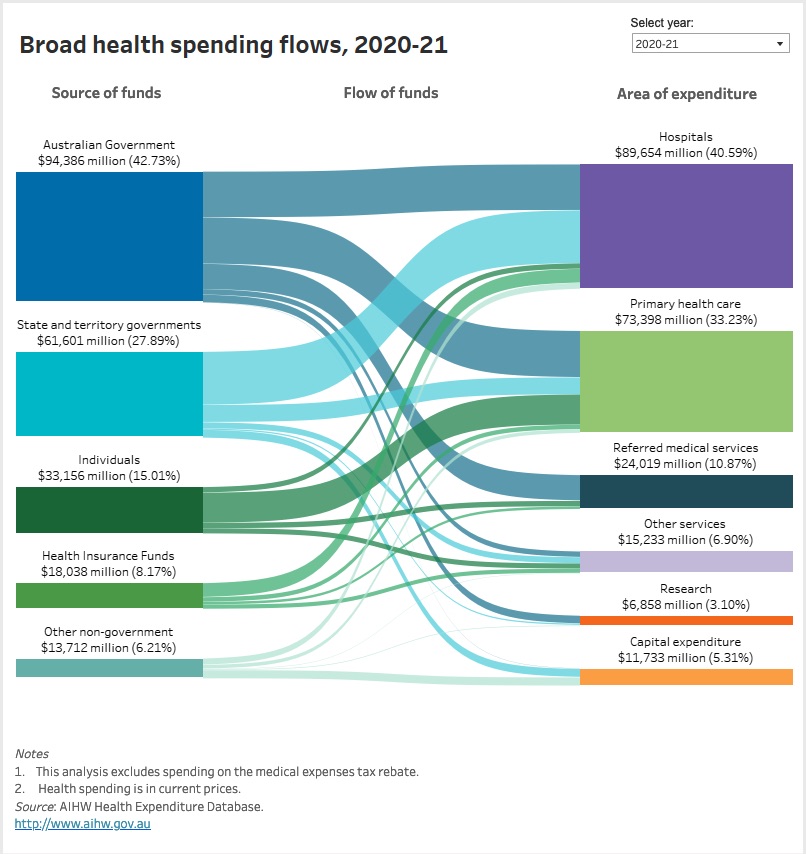 Total spending on GP services increased by 4.8 percent over the two years. However, this masks an increase in Commonwealth spending of almost seven percent, offset by a reduction in individual payments of nearly 10 percent. This clearly reflects the widespread utilisation of bulk-billed telehealth consultations.

Commonwealth expenditure on referred medical services (including pathology and diagnostic imaging, as well as specialist consultations and private patient in-hospital services) increased by 12.2 percent over the two years, presumably due to the costs of COVID-19 testing.

However, individual payments in the form of co-payments increased by nine percent. As the COVID-19 items were required to be bulk-billed, the increased individual contributions must relate to other specialist services.

In relation to non-medical services, total expenditure on dental care grew by only two percent over the two years.

However, expenditure on other health services (physiotherapy, psychology, optometry, audiology, and other allied health) fell by over five percent. Many of these services are difficult to provide through telehealth, and the lockdowns clearly led to many appointments being deferred or cancelled.

The other area of health spending to see a decline was administration, where total expenditure fell by 2.7 percent over the two years. The Commonwealth led the way by reportedly reducing its expenditure by over $400 million or nearly 20 percent, and the states followed suit with a reduction of four percent.

(It is possible that health departments took advantage of the pandemic to reclassify as “public health” spending previously categorised as “administration”.)

It was up to the private health insurers to avert a large overall decline by increasing their expenditure on administration by 9.5 percent – a surprising performance given the volume of benefits paid was largely stable.

As I have written earlier, private health insurance must be the only part of the financial sector characterised by decreasing efficiency. 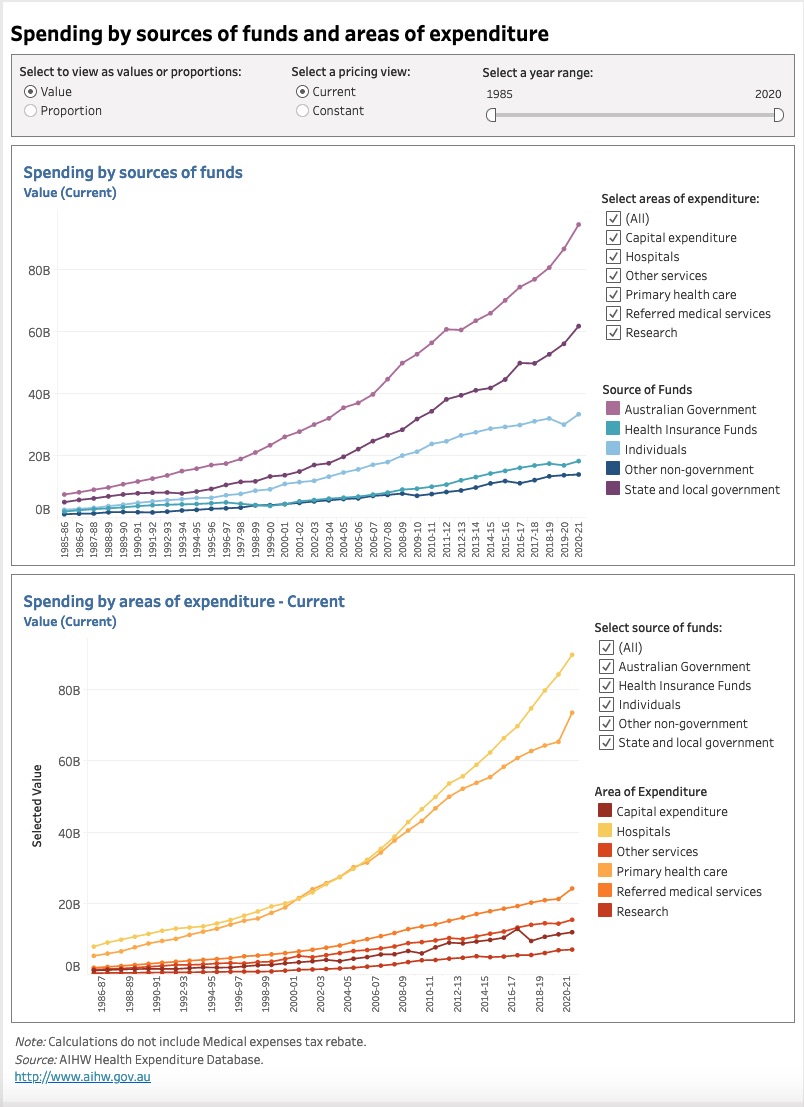 As the old saying goes, it is hard to make predictions, especially about the future. This is particularly true of predicting future health expenditure trends using 2020-21 as the base.

It may be that as COVID-19 spending by governments drops away, the standstill in private expenditure will come to an end as the backlog of deferred care is provided. Under this scenario the long-term trends in health expenditure will resume.

However, it now seems clear that COVID-19 will persist for some time yet.

As vaccine protection wanes with the passage of time, a new more transmissible variant causing more severe disease could easily require further increases in government expenditure. And then there is the so far unquantified impact of Long COVID on demand for health services.

Private health insurance data for 2021-22 released by APRA several weeks ago show that the catch-up in deferred private sector care has been slow to arrive. Privately insured hospital bed days continued to decline relative to 2018-19, even though the insured population increased.

The other important factor influencing future spending is the emerging health workforce shortage.

Healthcare is still a labour-intensive business, and if providers are to deliver enough care to meet demand in a tight labour market they will need to increase pay and improve conditions to attract and retain workers.

I think this means that when the health expenditure data for 2021-22 is released, it will show more perturbations and shifts away from long-term trends, and it will be a few more years before a new normal emerges. 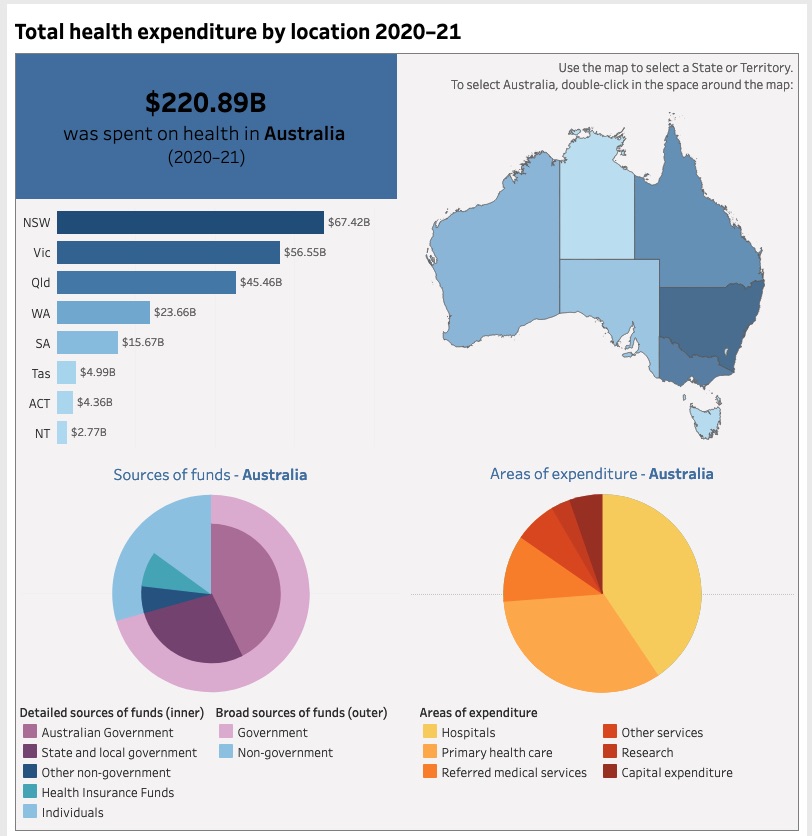 PrevPreviousWake up the snake: why Indigenous knowledges are key to transforming the response to climate chaos
NextAddressing nursing workforce shortages, what will it take?Next