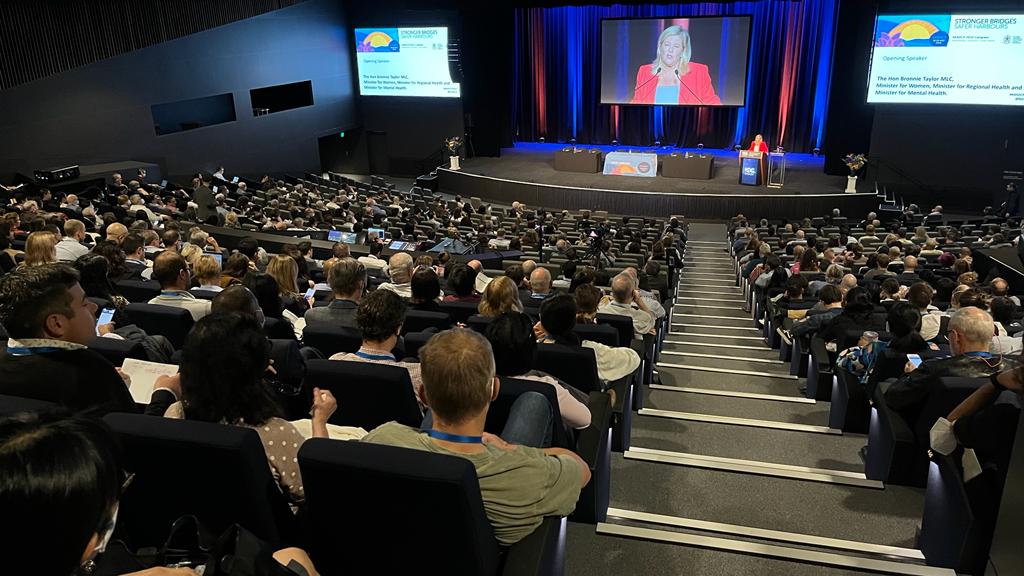 As a new report highlights the COVID-19 pandemic’s impacts upon the community’s mental health and wellbeing, Dr Amy Coopes reports on some related discussions from day one of the Royal Australian and New Zealand College of Psychiatrists Congress.

With the ongoing COVID-19 pandemic placing mental health services under unprecedented strain, psychiatrists have been urged to consider the whole patient in their context and eschew all forms of reductionism in favour of a “radiant, harmonic, unified” biopsychosocial model of care.

The call was made by eminent US psychiatrist Professor Allen Frances in a rousing keynote to open the 2022 Royal Australian and New Zealand College of Psychiatrists’ Annual Congress in Sydney, a hybrid virtual-in person event billed as the College’s largest meeting ever.

Duke University-based Frances has overseen several iterations of the authoritative Diagnostic and Statistical Manual of Mental Disorders (commonly known as the DSM, and currently in its fifth edition).

Frances lamented its siloed approach to mental health, too commonly viewed as a neurobiological issue, the product of trauma or a social ill that failed to apprehend the complexity of the human condition and was a “disaster” for patients.

“We need to realise that people are more complicated than any lab test will be able to cover,” Frances told delegates in a virtual address from the United States.

“The biological model of mental illness has been confirmed over and over again in a simple way, but it doesn’t explain disorders at a group level.”

Frances was scathing on the so-called ‘decade of the brain’, with untold billions spent on genetic and biomarker research that “overpromised and underdelivered” and had “failed miserably” in the quest for an organic silver bullet to explain and treat disorders of the mind.

With more than 200 genes typically implicated in development of a mental disorder, in a complex interplay with environmental drivers, Frances said polygenic risk factors were an over-hyped ‘fudge factor’ with less predictive value than a simple family history.

He described this biological reductionism as the biggest problem in psychiatry over the past 40 years, typified by the Sacker brothers – three psychiatrists who seeded the Valium and Xanax epidemics in the United States.

While much neuroscience research was intellectually fascinating at an academic or theoretical level, Frances said virtually nothing of clinical significance with a material benefit to patients had been discovered since the 1980s, when psychotherapy had its day in the sun, but at a fraction of the cost.

Supporting this was data showing that 80 percent of illness risk and treatment response was due to socioeconomic factors, he added.

Positing that reductionism was always wrong, regardless of its slant, Frances advocated instead for a “radiant, harmonic, unified theory of the biopsychosocial model of mental health and its treatment” which appreciated that medications were overused in people who didn’t need them, underused in those who did, and never sufficient in isolation.

He called for a rebalancing of research funding, 90 percent of which he said focused on neurobiology, advocating for improving treatment rather than establishing causality.

Instead, he said studies should seek solutions to issues like imprisonment and homelessness and have improvement of patient quality of life as their endpoint, helping people find more meaning in their lives through spirituality and connection, and integrating recovery and cognitive-based models of care.

This week’s Congress is the first time in two years RANZCP and trainees have been able to come together in person in any substantive way due to COVID. The pandemic was the subject of much discussion as proceedings got underway, with some 2,000 delegates in attendance face to face or via the online portal. 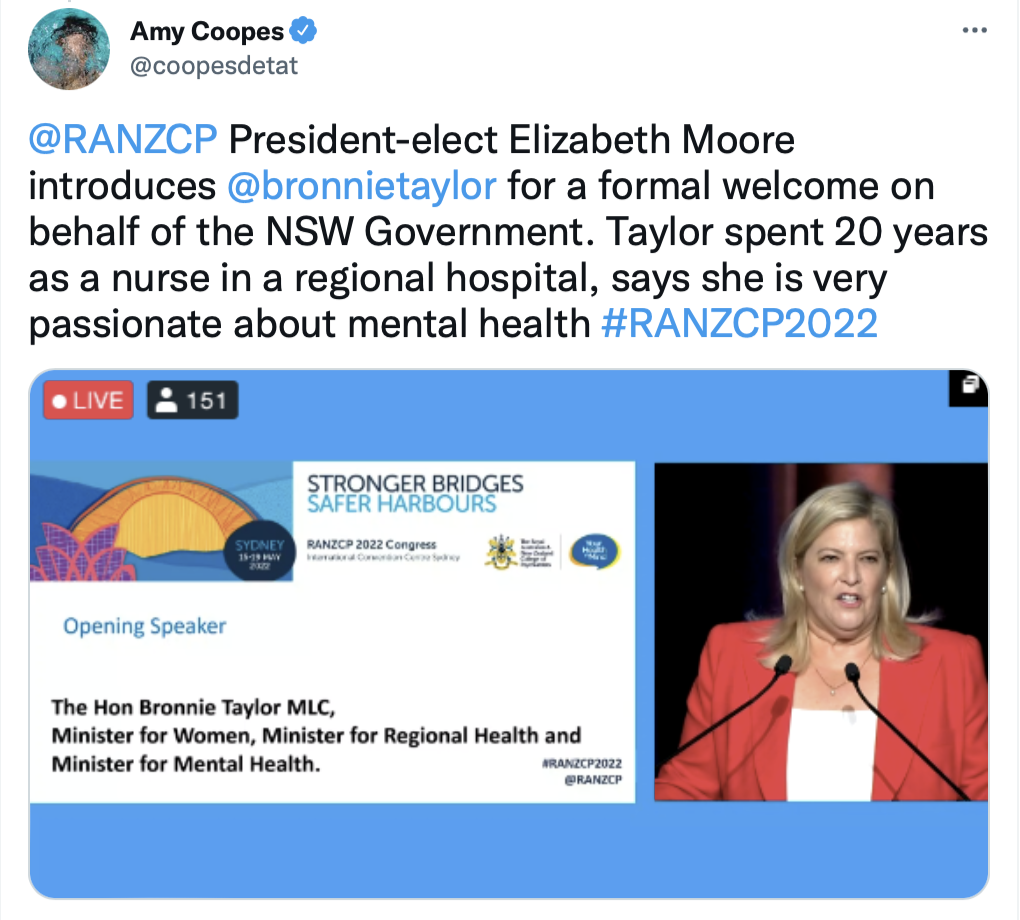 A number of speakers at the Congress reported they had never seen mental health services so stretched due to workforce shortages and surging demand.

Dr Nick O’Connor, who serves on the RANZCP board of directors and is also clinical lead of the mental health patient safety program at the NSW Clinical Excellence Commission, said he had “never really seen it as tough as it is now”, the result of years of chronic underfunding, increasing patient complexity and accelerating social inequity.

A dedicated crisis-themed session heard that 15 percent of all mental health assessment activity in rural NSW’s mental health emergency care services (MHECS) was attributable to the pandemic last year, with demand now at a new baseline.

Dr Katherine Knight, from the Sydney Children’s Hospital Network, said mental health presentations by young people had increased ten percent above population growth over the decade preceding COVID, and her service had seen a 30-40 percent surge between 2019 and 2021.

More troubling, Knight said, was the decreasing age of those presenting, with kids seen as young as six or eight, and growing numbers of tweens and early teens. 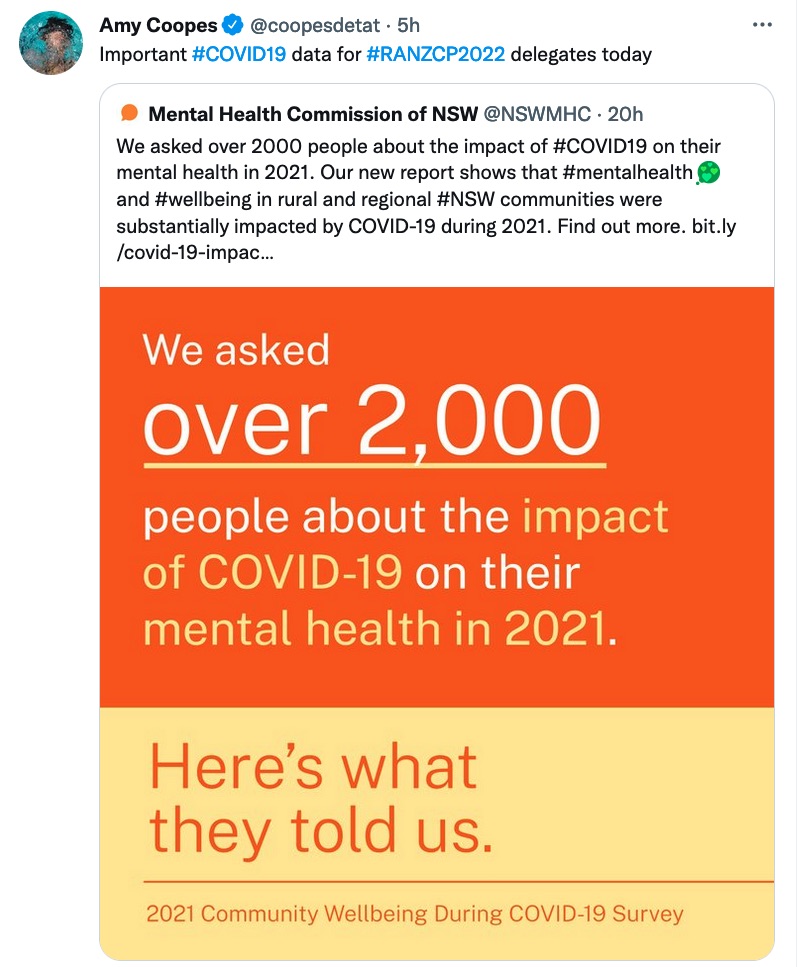 In his talk, Frances said the United States was presently the worst time and place in human history to be experiencing mental illness, with some 600,000 patients in jail or homeless, “treated like outcasts” and community psychiatry defunded to the point of extinction.

He contrasted this with approaches in Trieste, Italy, which focused on psychosocial determinants and interventions in a best-practice model of care.

Extending on his address was a much-lauded, powerful and heartfelt keynote from Wiradjuri and Kamilaroi journalist Stan Grant, who shared his personal reflections on the legacies of colonisation and assimilation for Australia’s Aboriginal and Torres Strait Islander people.

Grant’s remarks, which will be the subject of a separate Croakey story in coming days, were met with a prolonged standing ovation, and saw his name trending across Australia on Twitter.

The day also featured a lively and spirited debate on the prescription of stimulants for ADHD, which will also be covered in detail as part of Croakey’s conference reporting.

Looking ahead, Tuesday’s highlights will include a session on climate change and mental health featuring Tim Flannery, keynotes on women’s mental health and psychedelics in the treatment of mental illness, and a presidential symposium focused on COVID.

Extending on Monday’s sessions on training reform and advocacy in psychiatry, there will also be a trainee forum focusing on recent ructions within the College around representation and assessment to progress. 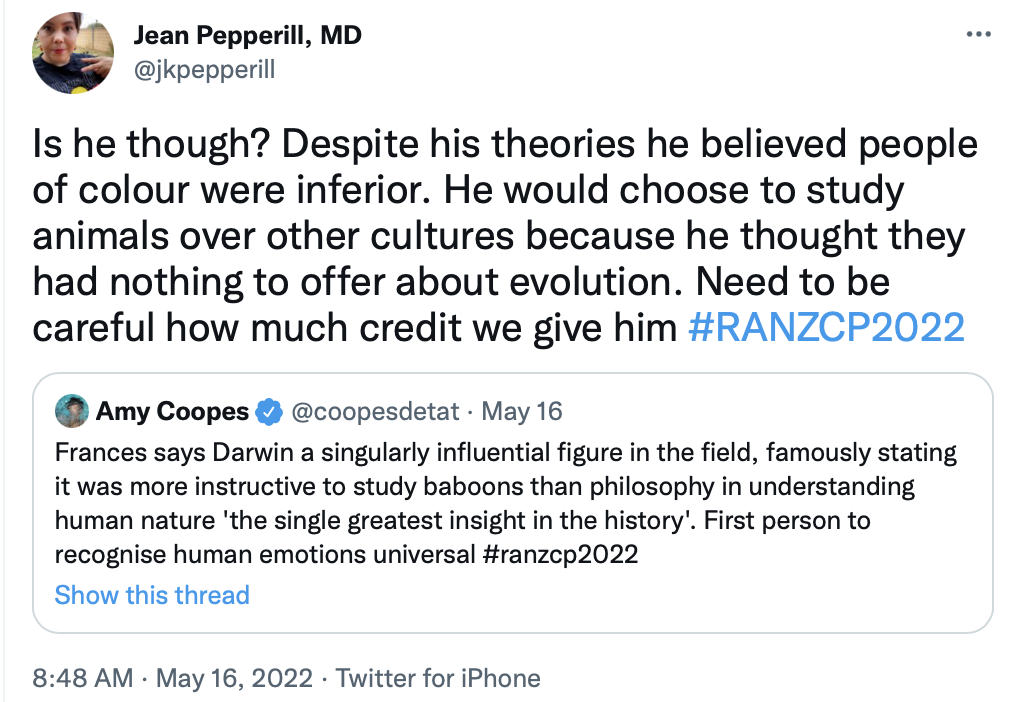 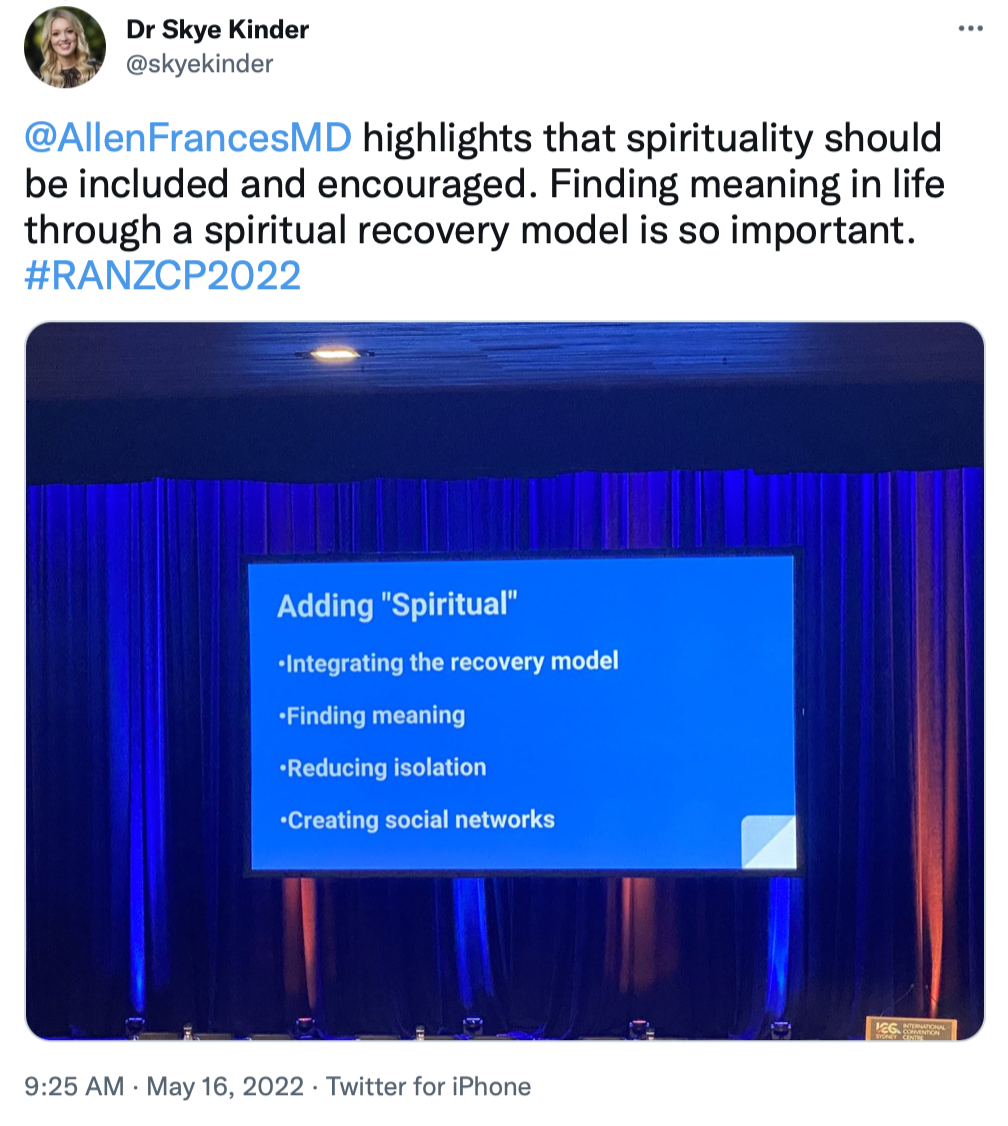 Dr Amy Coopes will be in virtual attendance for the Croakey Conference News Service. Follow her at @coopesdetat, with additional coverage via @croakeynews and @wepublichealth. Coopes previewed the Congress here.

See a broad overview of the discussions from day one of the Congress in this thread by Alison Barrett for @CroakeyNews.

The RANZCP Congress runs May 15-19 at the Sydney International Convention Centre.

Click through for the full in-person and virtual programs.

Bookmark this link to see all our conference coverage, and join the conversation at #RANZCP2022.

PrevPreviousOn the preventive health agenda: disrupting whiteness, equity, COVID rankings, housing matters, and more…
Next“The health system we have right now in Australia is not normal, not fair and not safe”Next