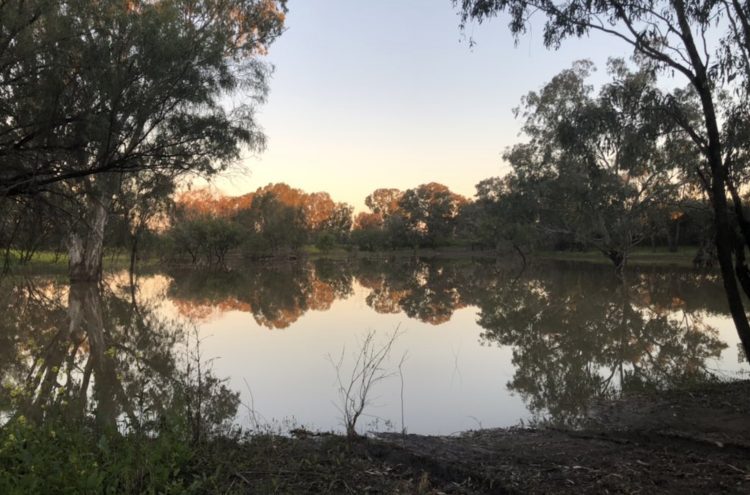 Amid widening lockdowns, policy failures and growing anxiety for Aboriginal communities, some thanks for the tireless workers

Introduction by Croakey: In the Northern Territory, the Greater Darwin and Katherine regions went into a snap three-day lockdown today (see exposure sites here), while lockdowns were extended in the ACT and Victoria, where tougher restrictions were also announced.

In NSW, which recorded its worst day of the pandemic with 478 cases and seven deaths, concerns are focused on addressing the risk to Aboriginal communities in the state’s west, including at Walgett, Mudgee, Bourke, Brewarrina, and Dubbo, where several schools are affected.

Aboriginal health services and community organisations have been working on vaccination efforts, and distributing sanitiser, personal protective equipment and donations. Some, such as the Dharriwaa Elders Group, are taking to social media to advocate for communities and share news and updates.

The Royal Flying Doctors Service, Australian Defence Force personnel and academic nursing leaders are also contributing to vaccination efforts. Meanwhile, the Federal Government has released new vaccination data, including details of the numbers of Aboriginal and Torrres Strait Islander people who have been vaccinated, though not the percentages. In the article below, Bhiamie Williamson, a Euahlayi man from north-west NSW and south-west Queensland and a Research Associate and PhD Candidate at Australian National University, says that what we now see unfolding “is the result of multiple, successive and cascading policy failures”.

“Now, the responsibility to make our communities safe is falling on our own organisations,” he says. “Often under-resourced and under-staffed despite calls for extra support from the government, these community organisations work tirelessly, often without due recognition or appropriate pay. Though this work may seem invisible to outsiders and government alike, we see it and we thank you.”

The article was first published at The Conversation under the headline, ‘The COVID-19 crisis in western NSW Aboriginal communities is a nightmare realised’, and was prepared in partnership with Charlee-Sue Frail, Dr Francis Markham and Peta MacGillivray.

The afternoon of August 11 was rather exciting in my community – the tiny, remote Aboriginal township of Goodooga in north-western NSW. After months of waiting, our COVID-19 vaccination clinic was planned for the next day.

Then the news came through of a positive case in Walgett, and the vaccine clinic was cancelled. In the midst of an unrelenting COVID-19 outbreak in NSW, other Aboriginal communities like Goodooga are facing uncertain times ahead.

From the start of the pandemic, Aboriginal people were identified as “a clearly defined vulnerable community”.

These vulnerabilities stem from both chronic health conditions suffered by Aboriginal people and under-resourced health services in regional and remote areas. 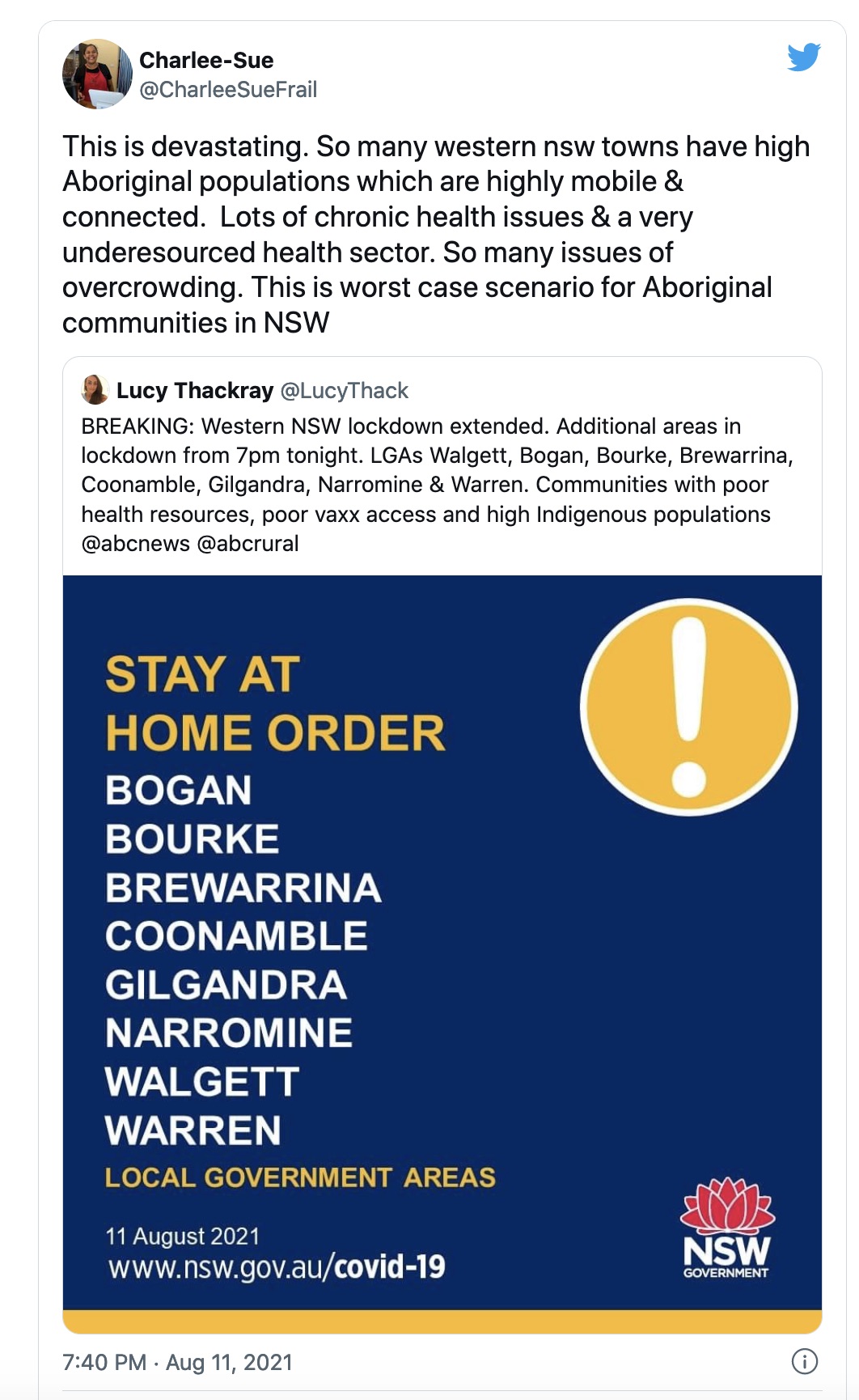 In response, the Commonwealth Department of Health listed Aboriginal and Torres Strait Islander people in Category 1B:

Aboriginal and Torres Strait Islander adults have been identified as a priority group for the COVID-19 vaccination rollout program.

Yet as far back as June, concerns were raised over low COVID-19 vaccinations.

Total Aboriginal and Torres Strait Islander vaccination rates are low, but there are also concerns about pockets of poor vaccination coverage in individual communities.

As Dr Jason Agostino from the National Aboriginal Community Controlled Health Organisation shared with the Guardian:

Unless we’re paying attention to those small levels of geography and those individual communities, we might find islands of poor vaccination coverage that leave those communities vulnerable.” 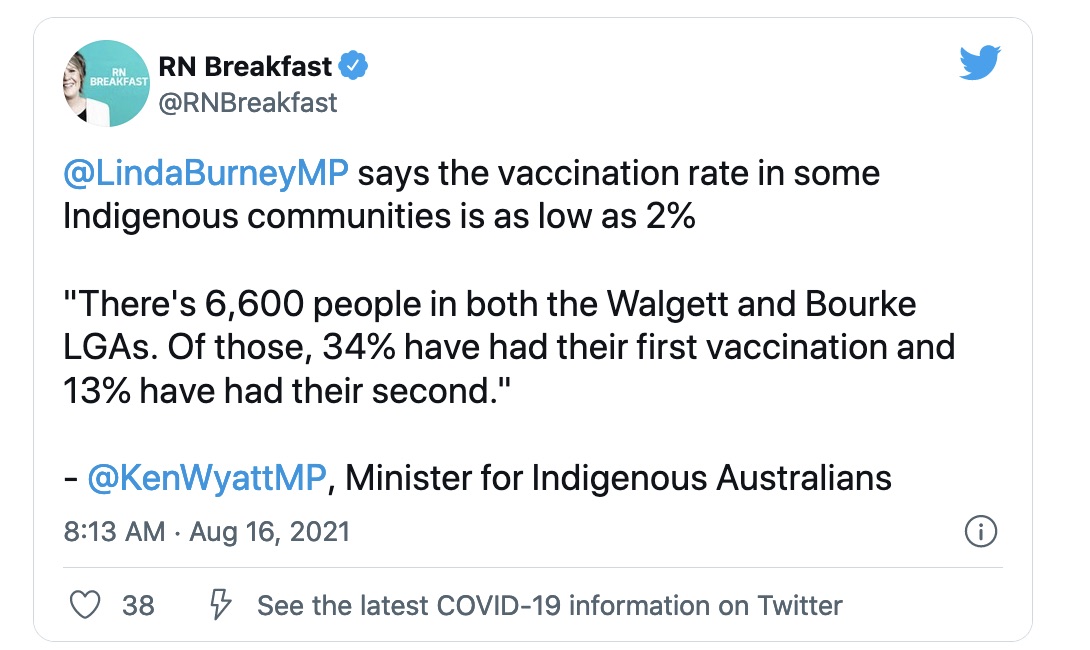 Low vaccination rates have been exacerabated by an absence of Pfizer supply to a youthful population. Aboriginal vaccine hesitancy in Western NSW is largely attributable to anxieties around AstraZeneca, something which isn’t specific to Aboriginal communities.

AstraZeneca hesitancy has been heightened by ATAGI’s recommendation that Pfizer is the preferred vaccine for those aged 12–59.

But in Brewarrina, a recent vaccination hub was organised, only for community members to find out it was only administering AstraZeneca. Instances such as this hardly alleviate anxieties, especially when the Aboriginal population is overwhelmingly young — 86% of Aboriginal people in the Brewarrina area are less than 60 years old.

Although Aboriginal people are in priority categories for access to the vaccination, in Western NSW we haven’t been given access to supplies of the Pfizer vaccine ahead of lower priority groups in Sydney.

The cancellation of vaccine clinics such as Goodooga and others (Bourke also had their vaccine clinic cancelled), add to these issues. 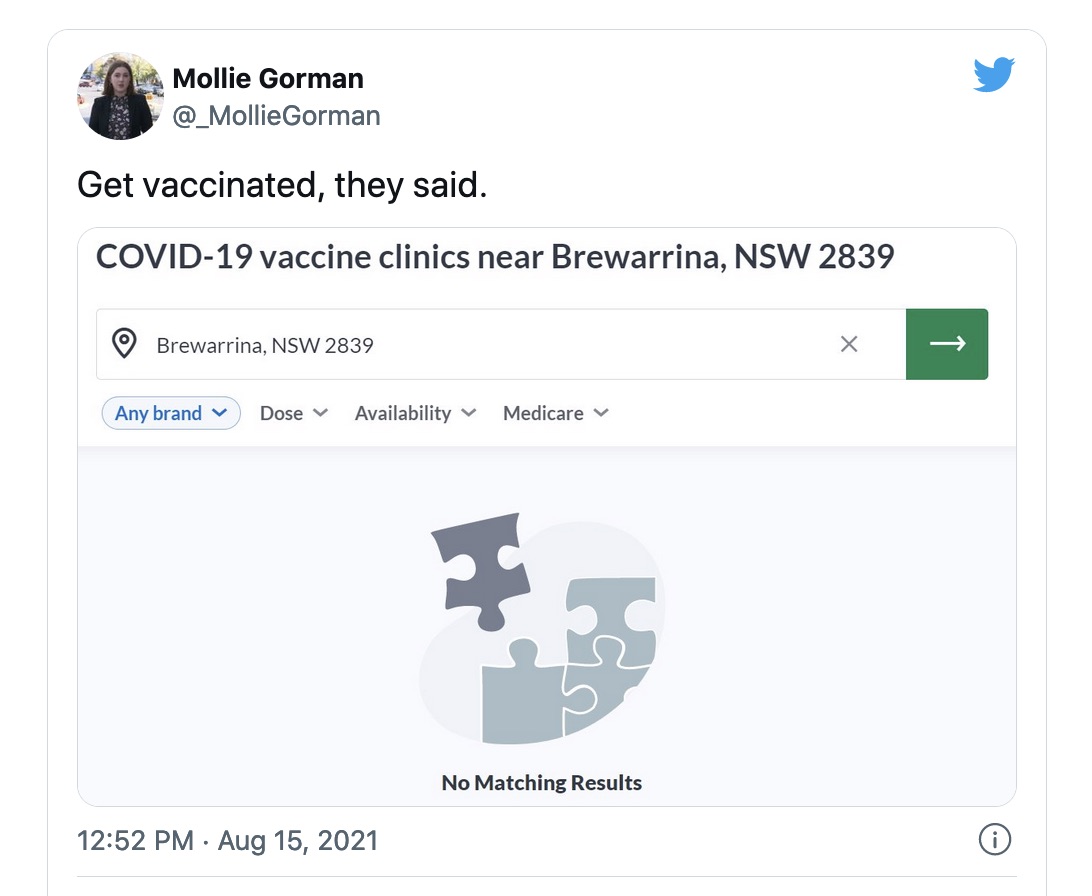 Indigenous organisations have long identified the need to deliver culturally appropriate public health messaging, especially around vaccinations, with some developing their own communications, such as NITV’s “Keep the Mob safe from COVID-19” campaign.

But this messaging has made limited headway given the mixed messaging about AstraZeneca and lack of access to Pfizer.

The State Government was put on notice by Aboriginal justice advocates who had highlighted the vulnerabilities of Aboriginal people in custody and in prison. Factors such as over-crowded conditions which make physical distancing impossible, and incarcerated people have much higher rates of chronic health conditions. The moment that the infection gets inside any of the prisons it’s really a bomb going off.”

Read more: First Nations people urgently need to get vaccinated, but are not being consulted on the rollout strategy

Then, in the first week of August, a young man in Western NSW was taken into custody over a weekend, tested for COVID-19 upon entering the prison, and then released on bail a few days later. This young man’s test was not considered urgent because he had not been to a location of concern nor a close contact of a known case.

By the time the young man’s positive test was returned, he was in his hometown of Walgett. The town was plunged into a snap lockdown, with emergency testing facilities established and urgent pleas for vaccines. While this was happening, an outbreak was spreading in Dubbo, a large regional centre that services much of the north-west. The adjacent local government areas of Bogan, Brewarrina, Bourke, Warren, Coonamble, Gilgandra and Narromine were also placed in a snap seven-day lockdown.

According to our estimates, Aboriginal people make up 25% of the general population in the nine areas of most concern in western NSW. Of this population, 26.5% are under the age of 11, meaning they are currently unable to be vaccinated.

A further 62.4% are aged 12–59, the age group for which Pfizer is ATAGI’s preferred vaccine. Until adequate supplies of Pfizer are provided, our community is unlikely to be protected against the virus. 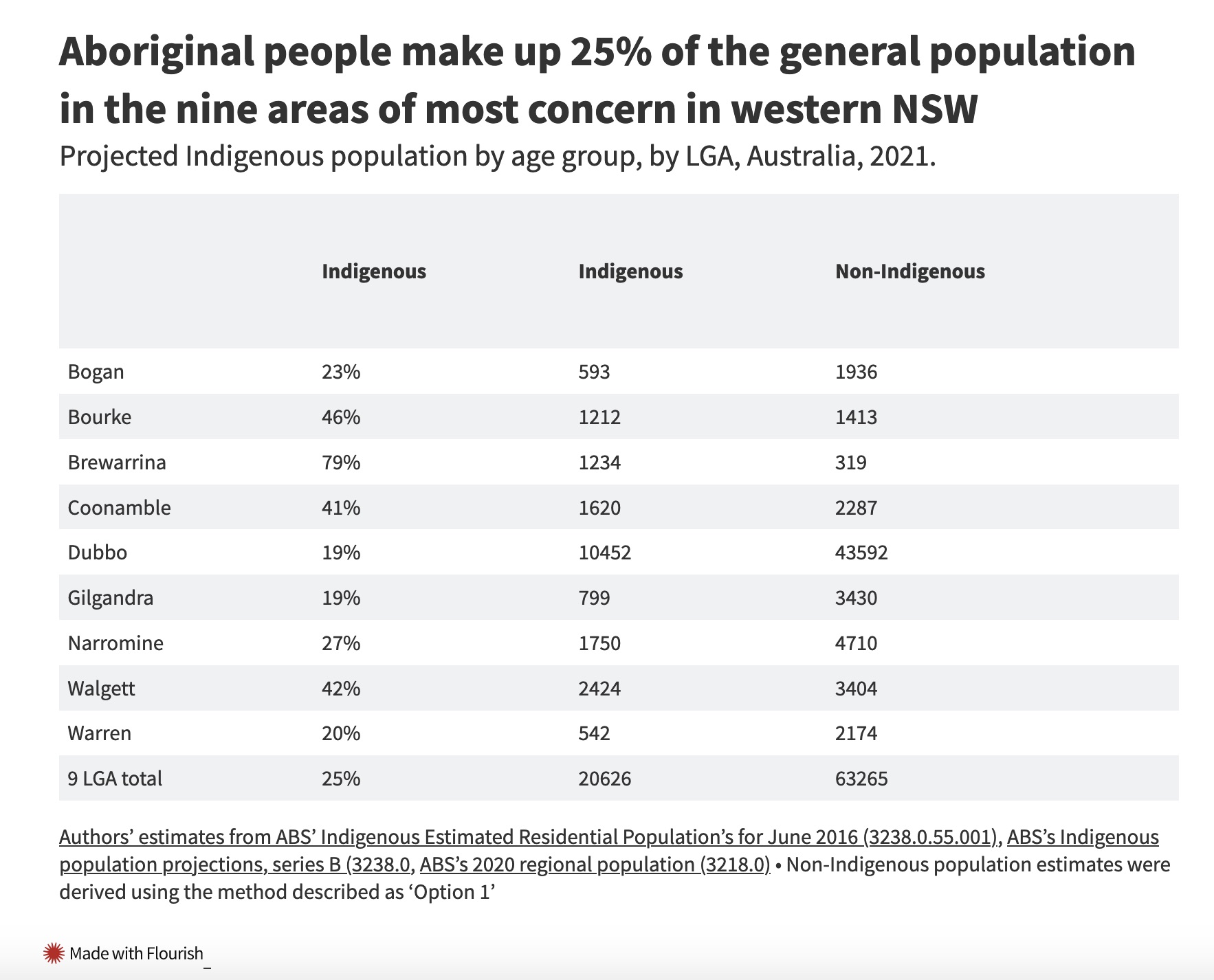 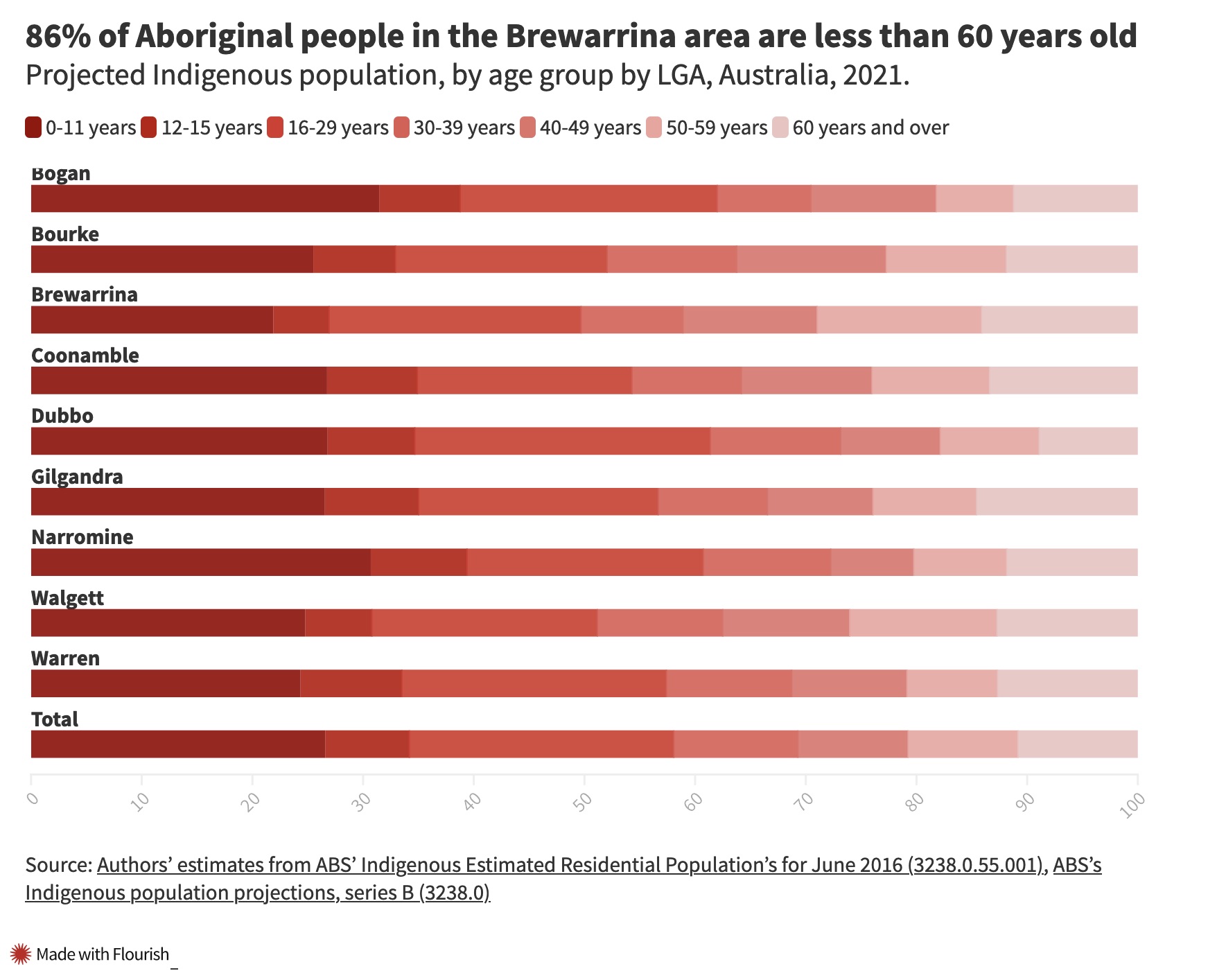 Fears in western-NSW continue to rise with the increased rate of positive tests in Aboriginal families with particular concern over the rate of COVID-19 infections in children.

It is also important to understand these remote townships rarely have the services and goods to sustain themselves.

For example, my hometown of Goodooga is located in the Brewarrina Shire, and yet our closest store is Lightning Ridge, located in the Walgett local government area. According to the restrictions first announced by the State Government, our community were initially not permitted to travel there for basic supplies.

Communities being left behind

As COVID-19 has spread, so has fear and anxiety.

Uncle Victor Beale, a Walgett Elder speaking to ABC’s Nakari Thorpe, said, “I thought Walgett was one of the safest places on earth [but now] there’s a lot of anxious people”.

Another Elder, Aunty Marie Denis Kennedy, meanwhile shared her concern and anger, “There’s no sort of protection for us”.

Scott McLachlan, the chief executive of the Western NSW Local Health District, shared his concerns around these recent outbreaks:

The large proportion of the new cases, and our total cases, are Aboriginal people both in Dubbo and Walgett and many of those are children.”

Meanwhile, the NSW Health Minister admitted the medical services in Walgett were not prepared for an outbreak.

There has also been anger at the confusion caused by uncoordinated and confusing messaging from the NSW government about infections and exposure sites.

The COVID-19 response in Sydney, where the Delta outbreak originated, was late, inadequate and ineffective.

Now what we see unfolding is the result of multiple, successive and cascading policy failures:

Sensible strategies with achievable milestones that have long been advocated for – such as securing temporary accommodation for inmates and detainees transitioning from correctional facilities – could have protected our communities.

Now, the responsibility to make our communities safe is falling on our own organisations. Often under-resourced and under-staffed despite calls for extra support from the government, these community organisations work tirelessly, often without due recognition or appropriate pay.

Though this work may seem invisible to outsiders and government alike, we see it and we thank you.

Back in Goodooga, families hide in their homes, hoping to ride out this outbreak. But there is a feeling also of being forgotten. In this extraordinary and scary time, all we seem to have is each other, and our families in the city who worry for us.

• Bhiamie Williamson is a Research Associate and PhD Candidate at Australian National University. He is a Euahlayi man from north-west NSW and south-west Qld with family ties to north-west Qld. He holds a Bachelor of Arts (Hons) from the Australian National University, a Masters of Arts in Indigenous Governance from the University of Victoria in British Columbia and a Continuing Education Certificate in Indigenous Governance from the University of Arizona. Bhiamie’s fields of professional and academic experience include Indigenous land and water management, Indigenous youth, Indigenous governance and Indigenous data sovereignty. He is a current member of the Mayi Kuwayu Data Governance Committee and the ACT Bushfire Council.

Professor Rhonda Wilson, a Wiradjuri woman and Head of Indigenous Nursing and Midwifery at the University of Newcastle, and colleagues Professor Amanda Johnson and Associate professor Donna Hartz are assisting the Walgett Aboriginal Medical Service with vaccination efforts.

“We are vaccinating in Walgett and small Aboriginal communities out west,” Wilson told Croakey. 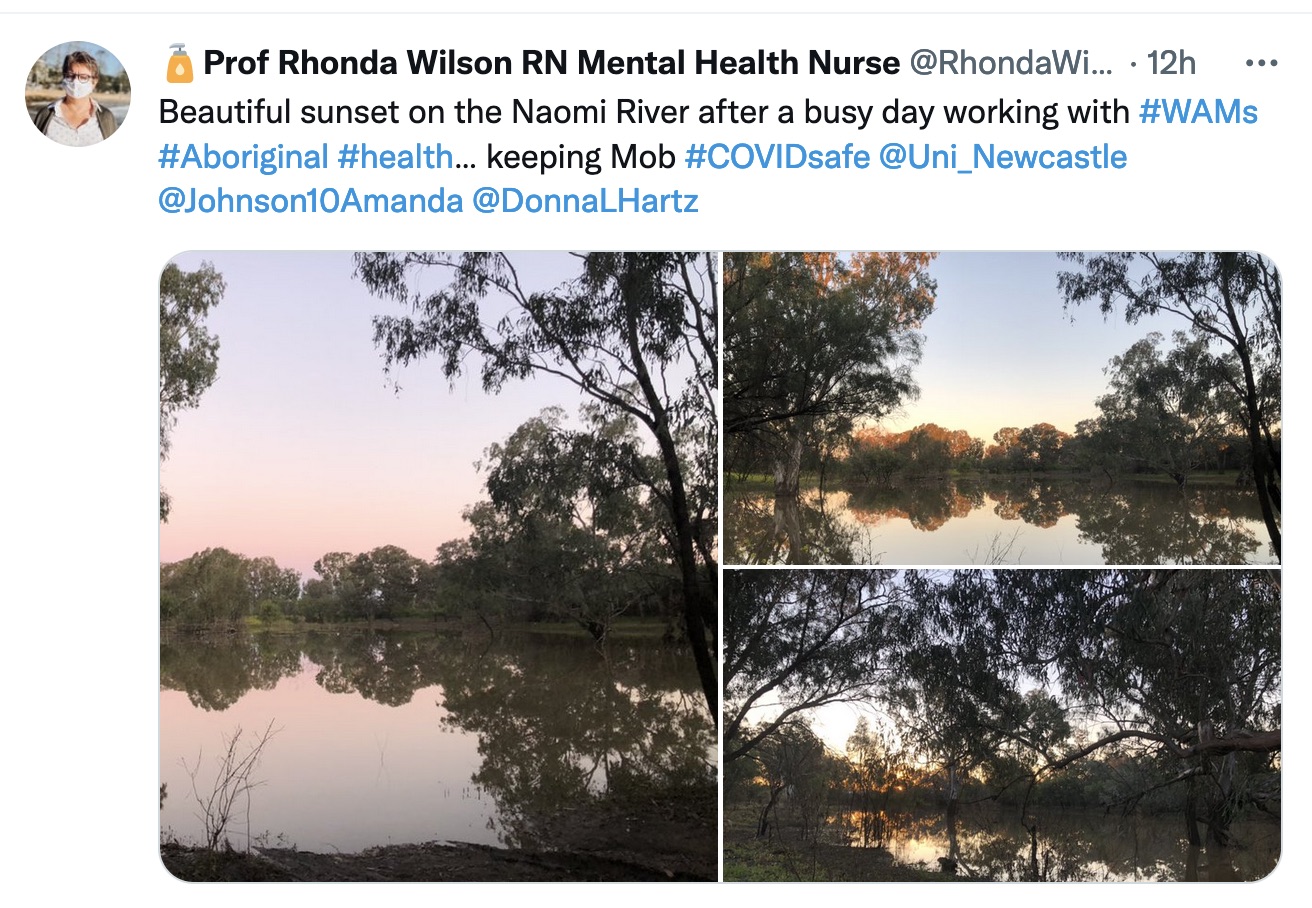 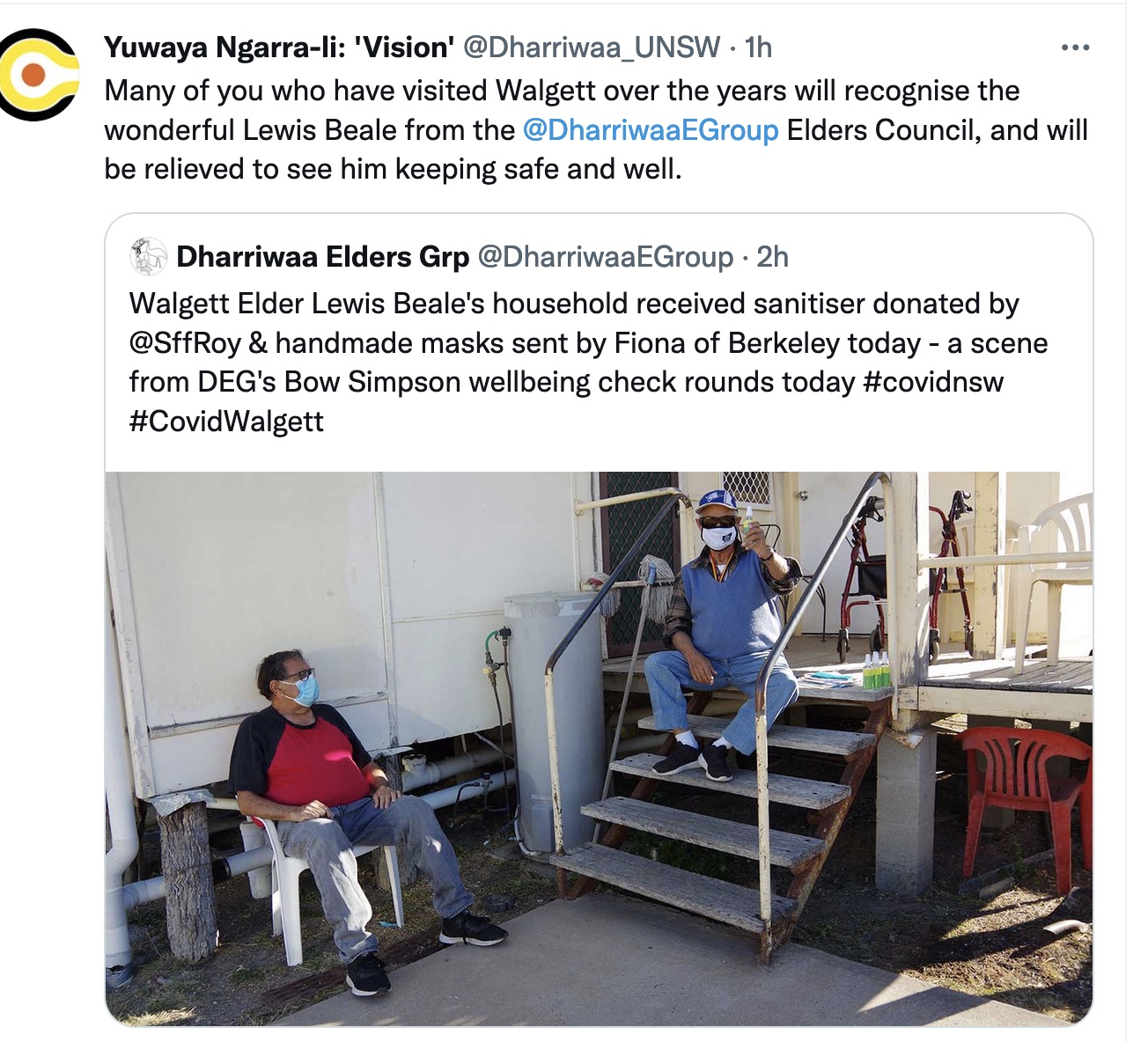 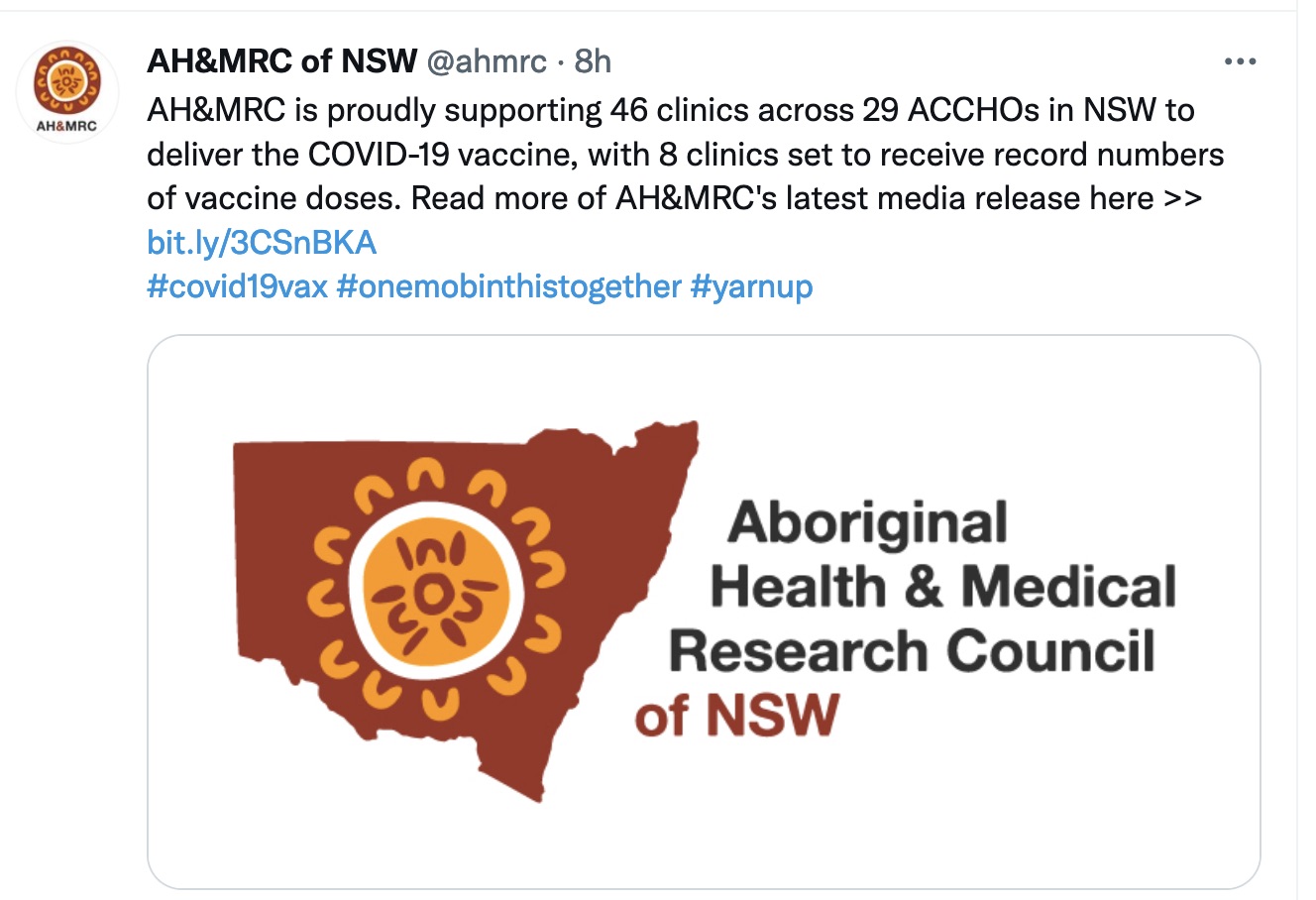 Read the AHMRC statement. Jade Hansen, Manager of Service Performance and Quality at the AH&MRC, said:

In order to keep our people safe, it is essential that the ACCHO sector, including the AH&MRC, have the support of the Ministry of Health and other NSW Government branches.

We are a priority population and we need action. We’re seeing workforce fatigue because we haven’t been resourced to be the leaders of the vaccine rollout for Aboriginal people. We can’t continue to foot the bill for this.”

Meanwhile, ABC journalists were quick to correct Deputy Premier John Barilaro’s claim that no media conference was held on Saturday to announce the statewide lockdown because there would be no regional journalists working. See our #JusticeCOVID project, on the pandemic and prisons.