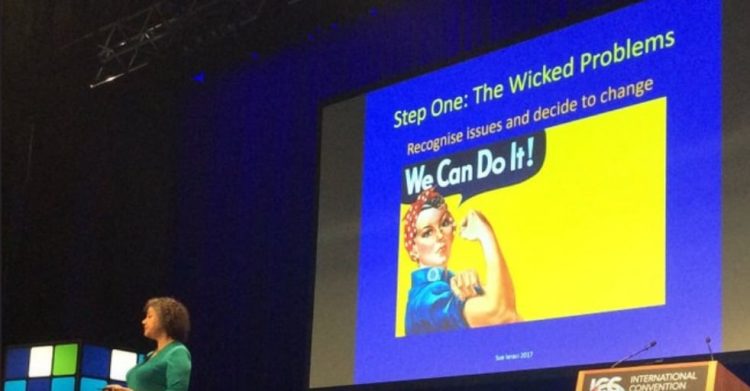 Towards a healthier emergency medicine system, with Dr Sue Ieraci

An applause-winning question: Is it time to re-think the way we do emergency medicine?

In an era of specialisation, emergency doctors are a disruptive force holding a mirror up to the hospital system and demonstrating new ways of working and truly patient-centred care.

But this comes at a cost to both the physician and the profession.

Those were the messages at the heart of a series of thought-provoking lectures by Bankstown Hospital’s Dr Sue Ieraci at the recent Australasian College for Emergency Medicine’s annual scientific congress in Sydney.

Ieraci, an emergency specialist with more than three decades’ experience in the public hospital system, was lauded for her candid assessment of the profession, highlighting some of the privileges and pitfalls of working in the ED.

In a talk titled Creation or Evolution? From Shelley to Darwin and Back, Ieraci detailed emergency medicine’s transformation from House of God chaos to a professionalised, sought-after specialty.

But this journey had not been without its problems, she said, likening the question to one of Frankenstein versus Prometheus versus Darwin. Where the former were about creation, Ieraci said the latter was about evolution – a process not driven by perfection but survival.

In the imperfect evolution of emergency medicine, she asked whether it was possible that they had “created a monster”, taking the most rewarding work in acute medicine for themselves and receiving resentment, access block and the tyranny of KPIs (key performance indicators) in return. 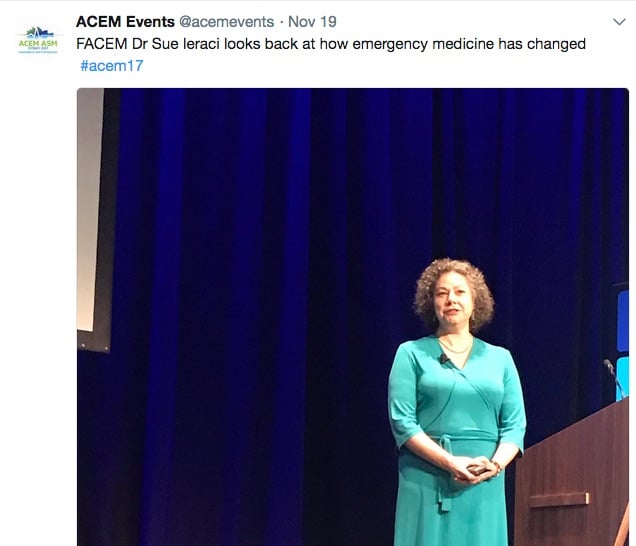 There was much to celebrate about being an ED physician, Ieraci told delegates. She described emergency medicine as a “disruptive force, working in new ways”, with vertical rather than horizontal hierarchies and patient-driven access.

ED doctors were generalists in a specialist era, she said, and “havers, not have-nots”, with the highest incidence of “fixes” per day and ongoing learning a feature of daily practice.

The work was challenging, with a high and mounting patient volume of increasingly complex and variable presentations, as well as the psychosocial demands of working under pressure and scrutiny, and losing patients.

But it was structural issues that made emergency medicine stressful, said Ieraci, pointing to data from an annual workplace survey of ED doctors showing that the three most common day-to-day stressors were overcrowding, access block and conflict with other teams.

The auditorium erupted in applause as Ieraci said the rest of the hospital should not be dictating practice to the ED nor viewing it as a dumping ground for patients, arguing there was no such thing as “too sick to be admitted”.

Ieraci said the ED’s job was not to process work for other teams or community providers, to carry risk for the entire hospital or to conduct non-time dependent workups. ED resources should be considered as precious as those of the ICU, she argued.

For doctors, Ieraci said it was important to resist the temptation to investigate “people who look like you and I, but have a symptom”, again prompting applause as she advocated public health “prophylaxis” – educating the public on how to deal with minor issues and where to go for such presentations.

The wellness industry was working against the health system in this regard, she added, engendering unrealistic expectations of wellbeing and encouraging punters to demand investigation of every symptom.

Rather than people with the simplest solutions waiting the longest in ED – a flu patient, for example, who simply needed rest and fluid – Ieraci called for greater capacity to retriage and the ability to counsel, reassure and send such people on their way.

She also advocated better seasonal management of resources, including fever and paediatric clinics for referral and treatment of such patients during peak periods.

Ieraci’s talks were so popular that she had to declare several times that she wasn’t running for election to the College or anywhere else. 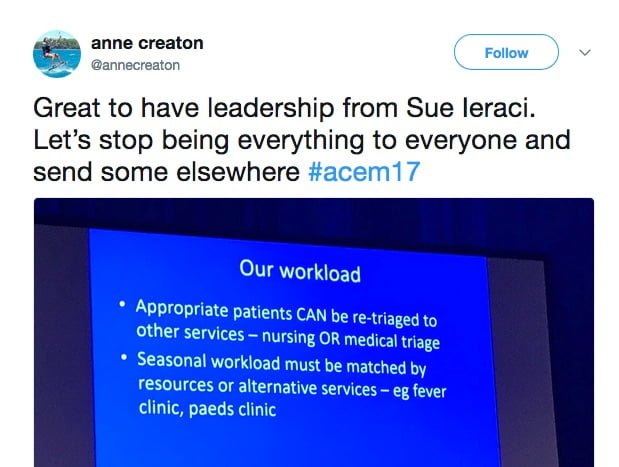 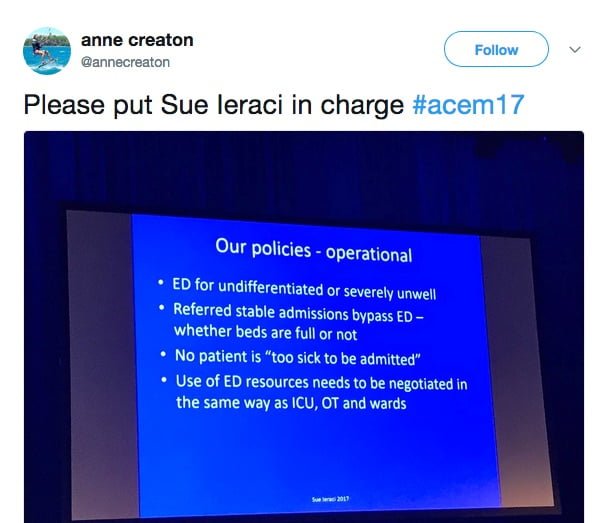 Ieraci said a sense of control was key to satisfaction in any job, and this was sometimes lacking for ED staff, with unrealistic demands that they never laugh, gossip or let off steam. 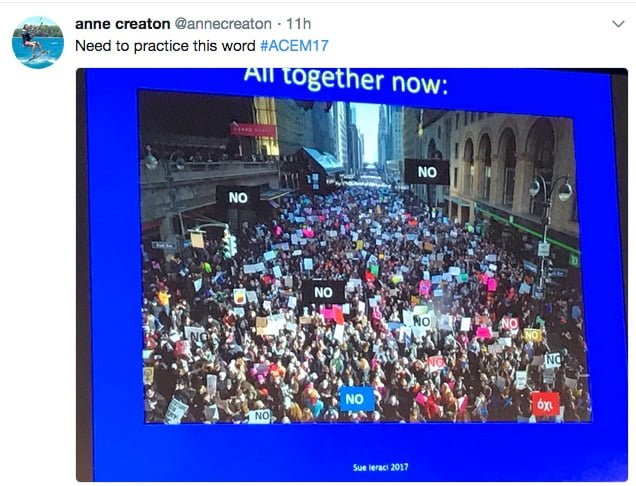 Because respecting very ill patients and stressed or grieving families was paramount, it was essential that there be private spaces for staff to have a moment’s such reprieve, she said.

She urged her colleagues to embrace the art of saying No, and shared some of her secrets to going the distance as an emergency doc: creating, writing, traveling, teaching, learning, protesting, campaigning, talking, sharing and nourishing your inner child.

Ieraci also strongly advocated mentoring and caring for vulnerable junior doctors, who were most susceptible to burnout, and modelling of good behaviour by senior specialists.

The grass wasn’t always greener on the other side, she reflected. It was green where you watered it, requiring nurturing, attention and care. 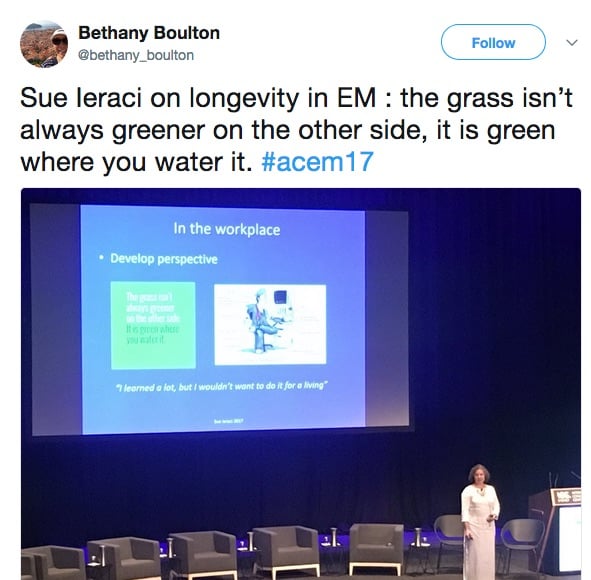 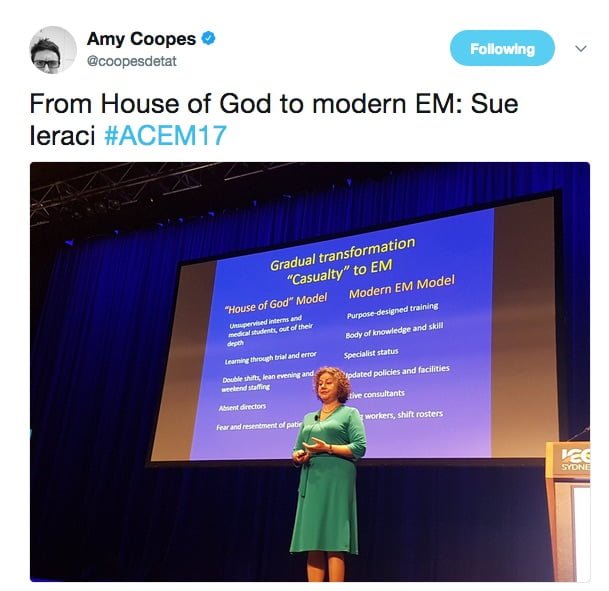 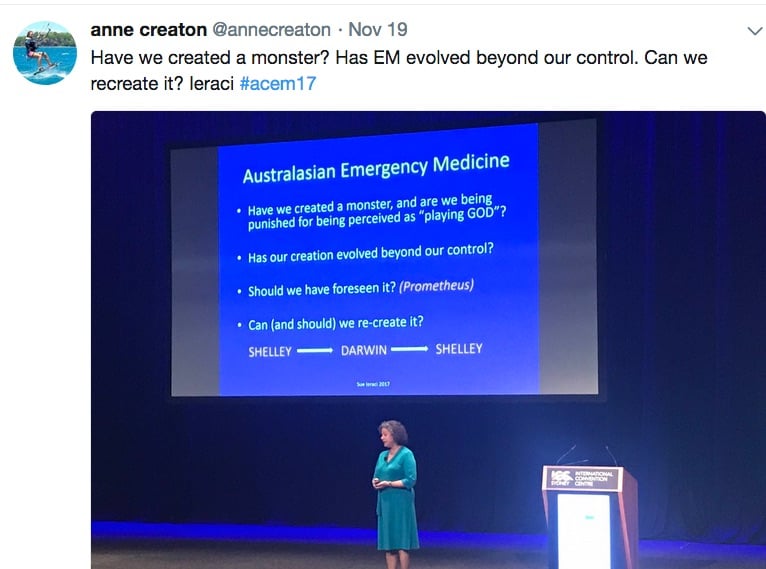 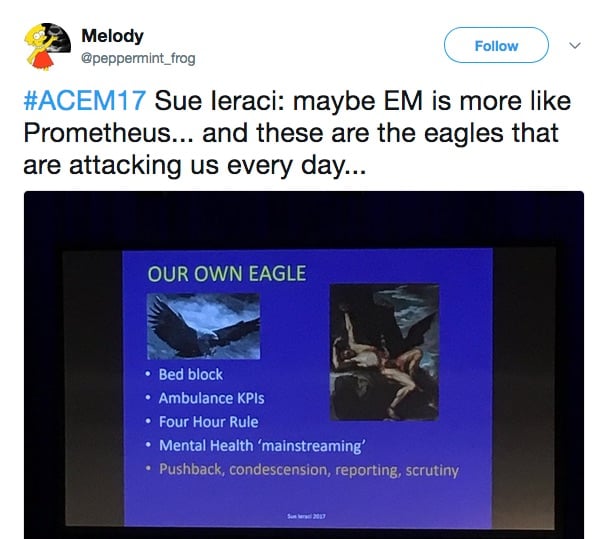 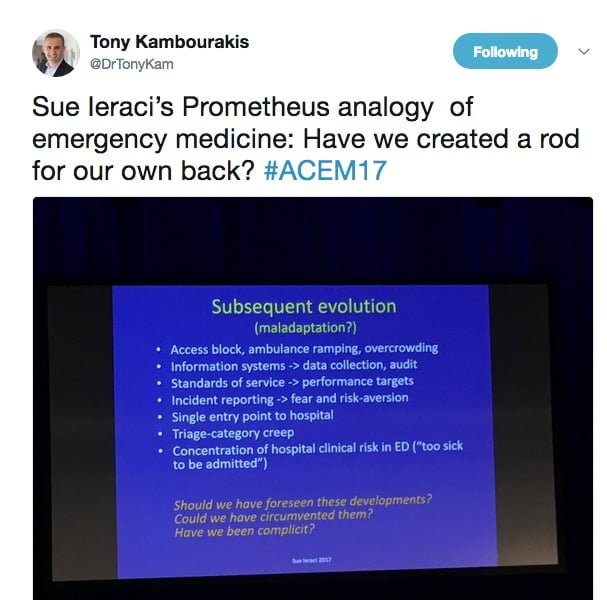 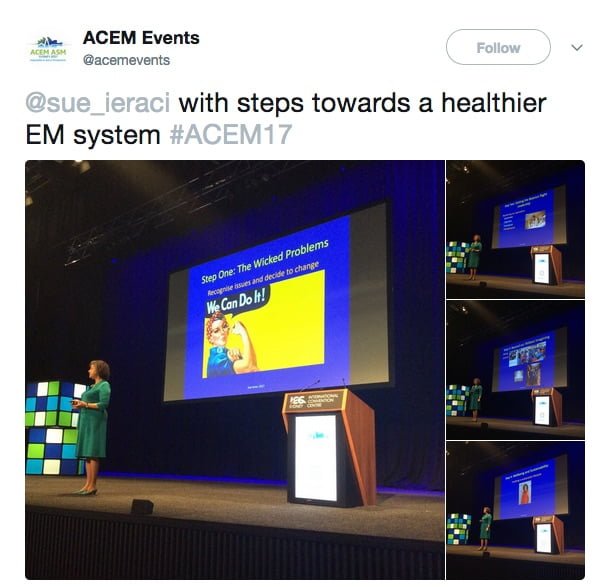 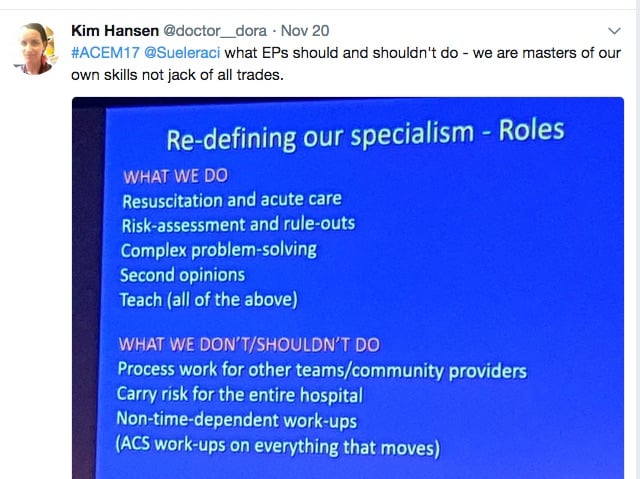 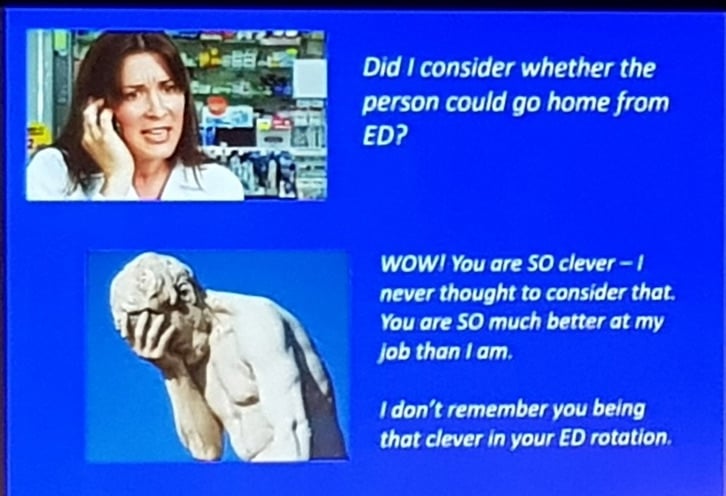 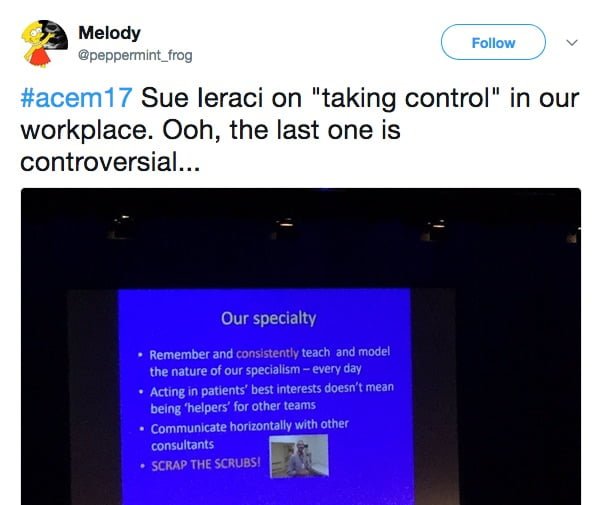 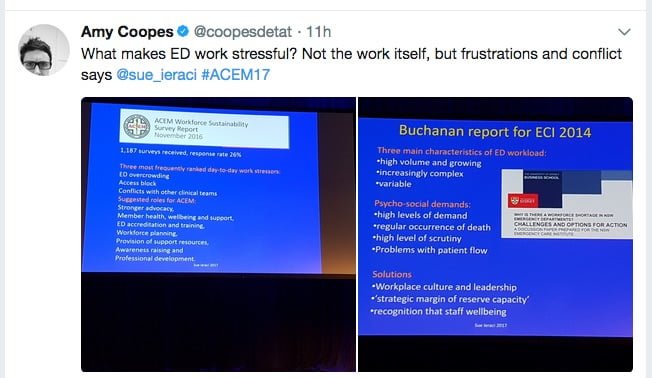 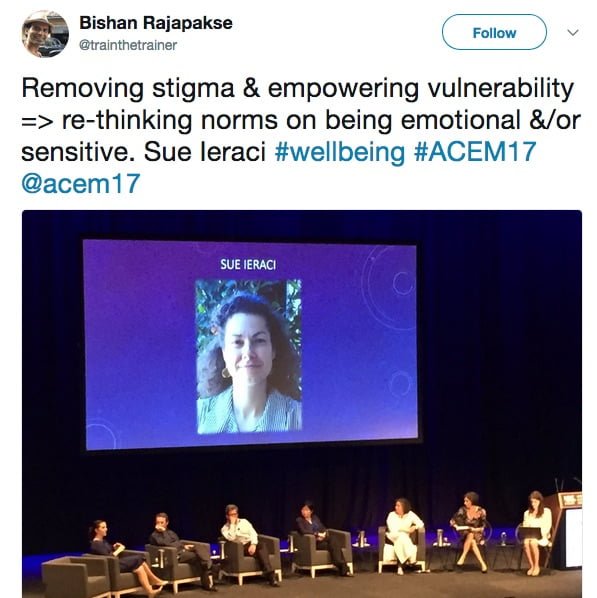 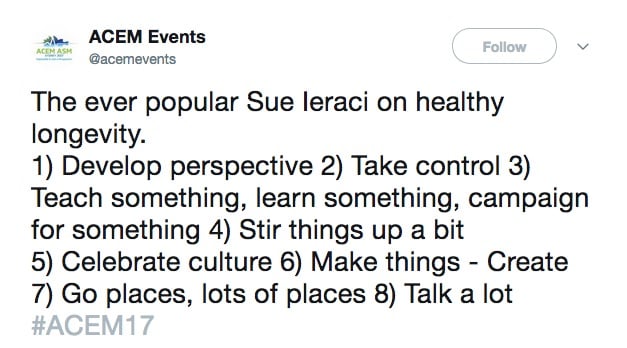 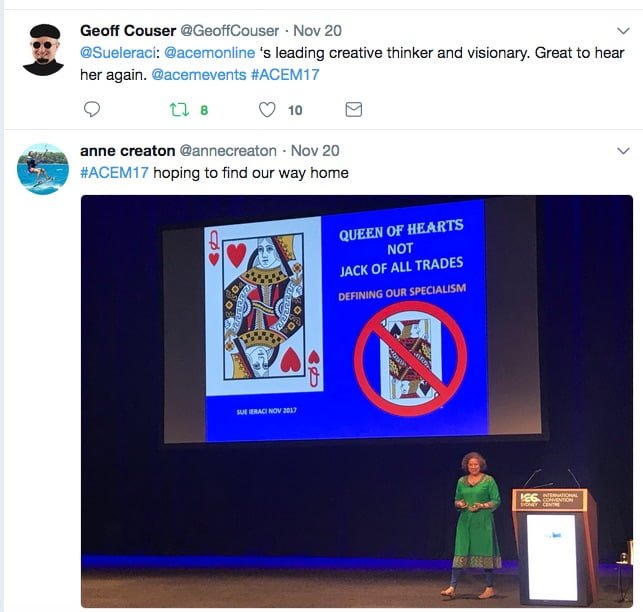 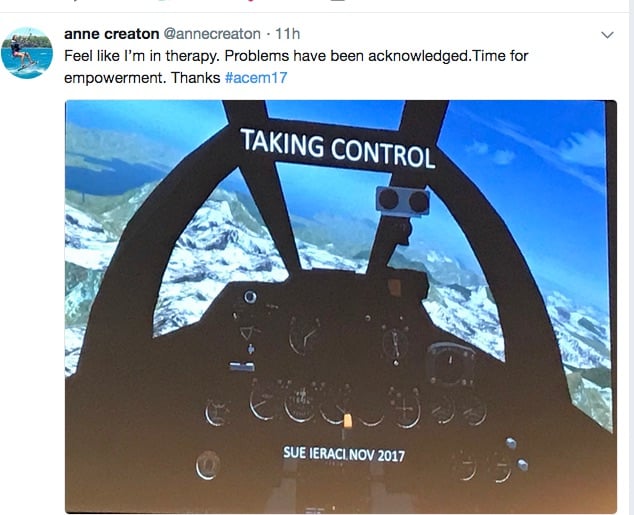