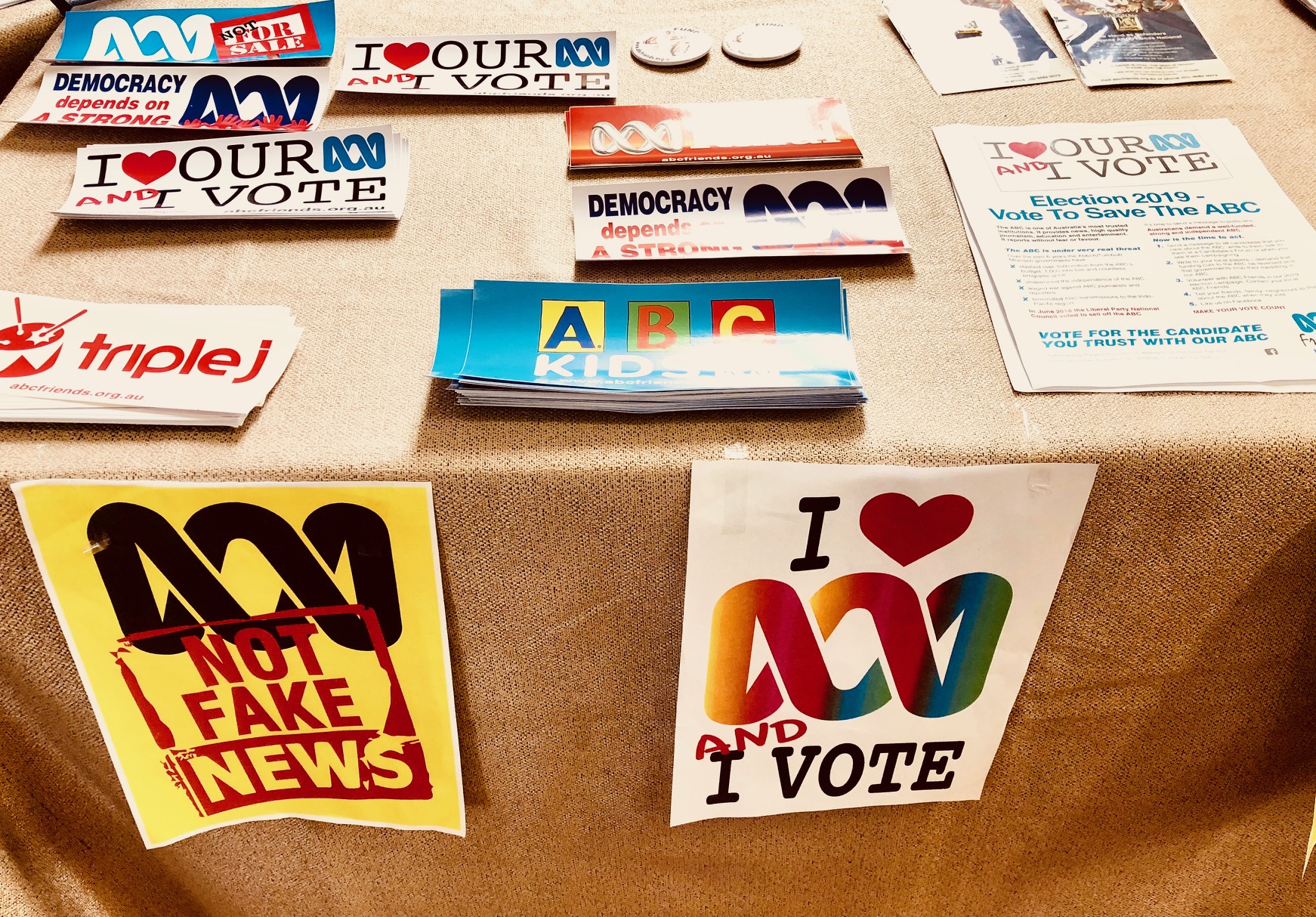 The ABC has never been under greater threat, says veteran journalist Quentin Dempster

An election health concern: the ailing state of the media

(Update, 12 May: The day after this article was published, the Labor Party announced extra funding of $60 million for the ABC and SBS, in addition to reversing the $83.7 million cuts to the ABC in the last two budgets. More detail is in Opposition Leader Bill Shorten’s speech to a Friends of the ABC rally in Melbourne yesterday.)

Introduction by Croakey: Critical concerns about the state of the media have been spotlighted in the final weeks of the federal election campaign, with important implications for our democracy, public debate and policy – and the health of communities.

Perhaps most spectacularly, a much-decorated journalist Tony Koch launched a blistering attack on his former employers of 30 years, the News Corp newspapers The Australian and the Courier Mail, calling out bias against Labor, the Greens and the ABC – and their partisan support for the Liberal and National parties.

Koch wrote in The Guardian: “About six weeks ago I cancelled my subscription for The Australian newspaper after getting it for more than 30 years. As soon as this election is over, I will do the same with the Courier-Mail.”

See some responses from other journalists in tweets below: 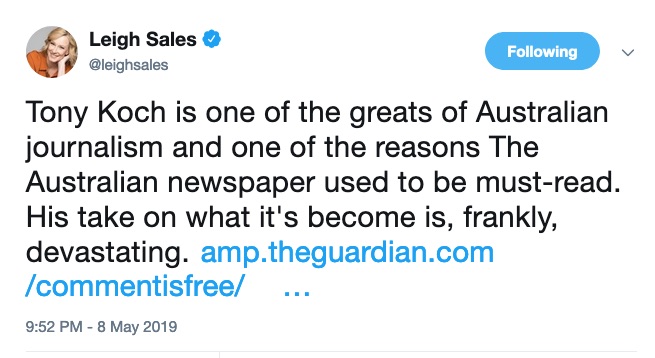 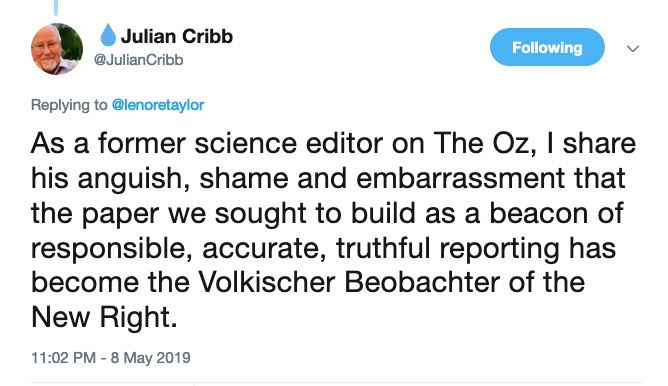 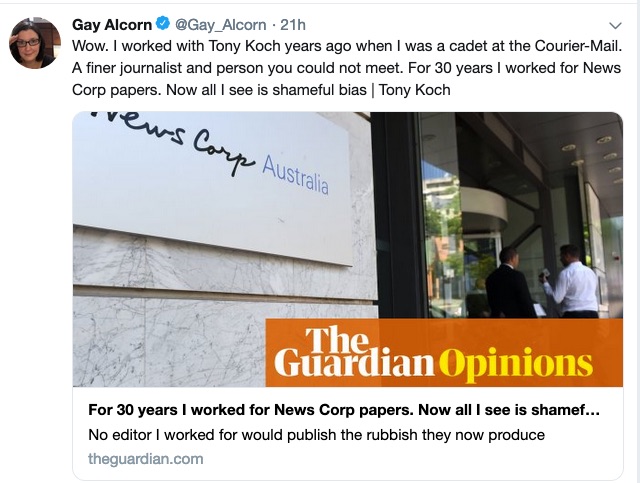 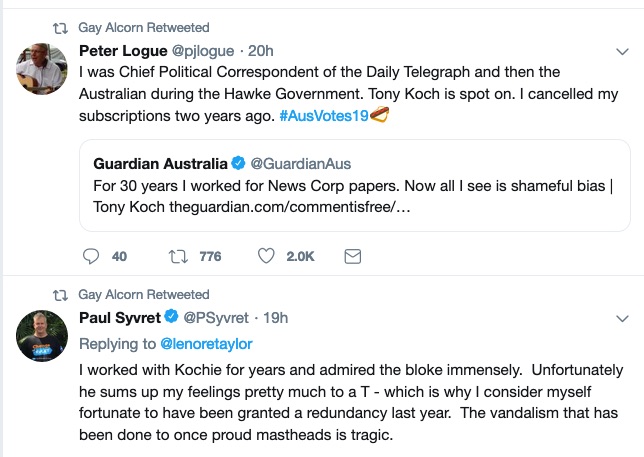 Another News Corp insider, the social affairs writer at The Australian, Rick Morton, also went public about concern among some colleagues about the editorial line being pushed by his newspaper (listen to his full presentation to UTS journalism students here).

Wider concerns about the challenges facing public interest journalism are outlined in great detail in a new report, The public’s right to know: the MEAA Report into the State of Press Freedom in Australia in 2019.

Released on World Press Freedom Day, it describes how “the widespread use of defamation, excessive court issued non-publication orders, and national security and metadata retention laws” are combining to make it more difficult for Australian journalists to do their jobs. 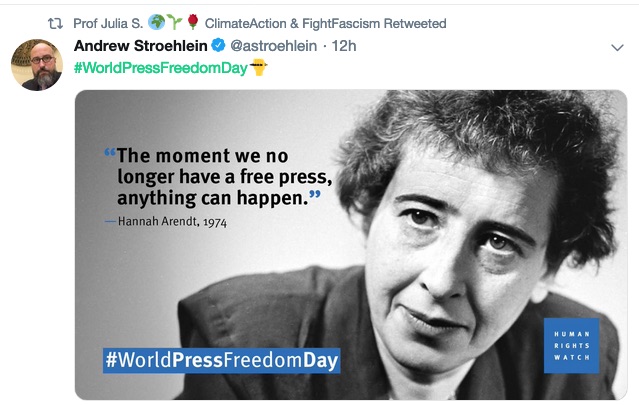 Meanwhile, the ABC’s new managing director David Anderson has warned of job cuts and programming disruption if the Morrison Government is returned, while former ABC journalist Quentin Dempster is fronting a GetUp campaign urging voters to support candidates who support the ABC (watch his video here).

In an email sent out by GetUp, Dempster says:

I was part of the ABC for 30 years as a journalist, broadcaster and director. I can say categorically that the ABC has never been under greater threat.

The Institute of Public Affairs, backed by Rupert Murdoch and bankrolled by mining magnate Gina Rinehart, wants the ABC destroyed through privatisation. The Federal Council of the Liberal Party voted overwhelmingly for a resolution to do so.

I don’t lend my name to things lightly, but GetUp members have long been great defenders of our ABC. So I’m joining with you to put an ad, featuring my voice, in electorates where attacks against our ABC can be a decisive issue this election.”

The Media Entertainment and Arts Alliance is calling on federal election candidates across many rural and regional seats to oppose any job losses or masthead closures that may result from the recent sale of Australian Community Media’s 170 publications.

The MEAA has written to candidates in 20 seats following the $125 million sale by Nine Entertainment to a business headed by media entrepreneur Antony Catalano and Thorney Investment Group.

The sale includes mastheads with a history of public interest journalism such as the Canberra Times, the Illawarra Mercury and the Newcastle Herald, as well as 130 community-based websites and agricultural publications such as the The Land, Queensland Country Life, and Stock and Land.

These titles employ more than 650 editorial staff and provide vital coverage of local courts, councils and politics to an audience of more than four million readers every month.

Maintaining independent coverage of local issues is vital for our democracy.”

(And Croakey would also add that this is vital for the health of rural and regional communities.)

Meanwhile, in a reminder that the Murdoch empire is not the only corporation shaping public and policy debates, a cofounder of Facebook, Chris Hughes, has called on the United States Government to break up the company.

The Guardian also reports that Massachusetts senator Elizabeth Warren has pledged that if she is elected president, she will break up Facebook, Amazon and Google, and pass legislation to diminish the growing power of these tech giants.

“Today’s big tech companies have too much power – over our economy, our society and our democracy,” she said. “They’ve bulldozed competition, used our private info for profit, hurt small businesses and stifled innovation.”

On related matters, Croakey readers may also be interested in this project by The Guardian, tracking Facebook ads from the major parties, independents, politicians and other groups during the election campaign.

And please read the article below, first published at The Conversation, that examines media failures in climate change coverage.

Although some could argue that Labor after the Rudd-Gillard years was in a deep mess and not fit to govern, such a headline was deeply partisan and far from neutral election campaign coverage. The Guardian’s Roy Greenslade said at the time of News Corp chief Rupert Murdoch:

There is not the slightest attempt to conceal his agenda. It is blatant, bold and belligerent. And it confirms yet again the way in which he links political interventions to his commercial desires.

Read more: FactCheck: does Murdoch own 70% of newspapers in Australia?

The similarities between Labor in 2013 and the Coalition in 2019 are uncanny. They have done the same number of replacements of sitting PMs (Labor 2010-2013: Rudd-Gillard-Rudd. Coalition 2015-2019: Abbott-Turnbull-Morrison). And both parties have suffered from disunity and division, although the Coalition is perhaps even more divided than Labor was in 2013 on core policy issues such as climate change.

And yet, we have seen no “Kick this mob out”-style headlines targeting the Coalition from News Corp Australia’s publications in this campaign. Instead, it’s been a steady drumbeat of one-sided, positive coverage (or convenient lack of scrutiny) of the Coalition’s candidates and policies, compared to a barrage of criticism of Labor and Bill Shorten.

News Corp’s campaign coverage so far confirms that growing partisanship in political reporting seem to have become increasingly entrenched in the organisation.

A case in point is The Daily Telegraph’s much-maligned front page story on Wednesday that implied Shorten hadn’t told the full story when describing his mother’s educational opportunities on Q&A earlier earlier in the week.

The article can only be described as an ultra-partisan hatchet job. Shorten called it a “new low”, while Kevin Rudd went so far as to compare News Corp with the People’s Daily newspaper in China on Twitter. 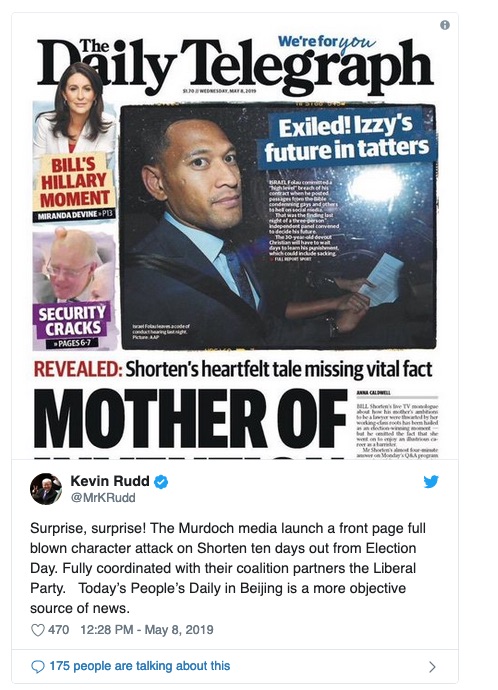 Interestingly, the Telegraph’s story on Shorten’s mother appears to have backfired, creating a huge social media moment – #myMum – devoted to people’s stories of their mothers.

Read more: A matter of (mis)trust: why this election is posing problems for the media

But the article illustrates how damning it is for diversity and plurality when media ownership is as concentrated as it is in Australia, with News Corp being the dominant player by far. If the dominant outlet in such a media landscape decides to wholeheartedly back one side of politics, it will undoubtedly impact the tenor of a campaign and skew the information voters rely on to make up their minds.

It’s not good for a healthy democracy and a fair election campaign.

Backing one side of politics is nothing new for News Corp. There is plenty of empirical research spanning decades documenting how Murdoch’s media empire has sought to influence politics in Australia, the UK and the US. One of the most comprehensive and damning studies is David McKnight’s Rupert Murdoch: An Investigation of Political Power, which is a devastating read illustrating how Murdoch has used partisan journalism for decades to gain political influence benefiting the media empire’s financial bottom line.

Indeed, this is what Labor claims is the driver behind News Corp’s scathing coverage of its policies in this campaign. Deputy leader Tanya Plibersek and assistant treasury spokesman Andrew Leigh tied the partisan coverage to Murdoch’s desire to protect “tax loopholes” in Australia by keeping Labor out of power.

One of the case studies in McKnight’s work is News Corp’s undermining of climate science and meaningful action on climate change. This can also be seen in its coverage of the current Australia election campaign.

In spite of polls showing growing support in Australia for action on climate change (59%) and renewables (84%), the environment is still treated as a second- or third-tier election topic by most media (with the notable exceptions of Crikey and the Guardian). This is particularly the case with outlets owned by News Corp.

When climate change has been covered by News Corp in the campaign, it’s predominately been done in an alarmist way to slam Labor’s policies. For example, The Australian reported a week ago that Shorten’s climate policies aiming to reduce greenhouse gas emissions by 45% by 2030 could cost the country A$264 billion – a figure based on modelling by a former government economist that Shorten dismissed as “propaganda.”

Though notable climate experts and academics also disputed the estimate, it was widely repeated across News Corp’s other outlets. 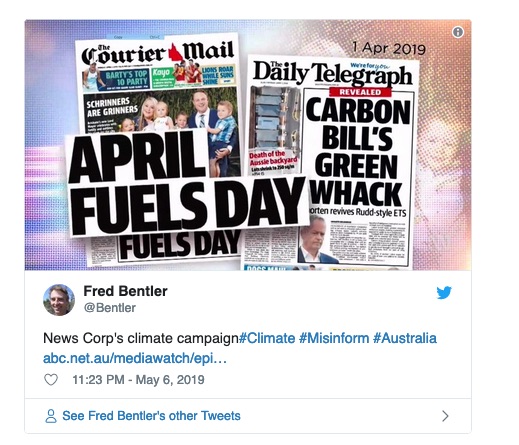 Meanwhile, News Corp has asked few critical questions about the Coalition’s much less ambitious climate plan. Most importantly, hardly any coverage has been offered by the large legacy media outlets (such as the ABC, The Age and the Sydney Morning Herald) on seriously assessing the cost of inaction on climate change. (A study to track climate change coverage during the campaign is currently underway by myself and a colleague.)

Overall, the media coverage of climate change thus far can only be described as a failure (with a few exceptions). A failure of giving it enough prominence during debates, panel discussions and crucial press conferences. A failure of deeply scrutinising climate change policies from all parties.

The next generation has made it abundantly clear where it stands on the issue in school strikes and protests across the country. It’s time we all, including the media, start listening to them and give them a voice in the final week of election coverage.

• Johan Lidberg is Deputy Head of Journalism at Monash University.

• Please also see Croakey’s series of articles exploring the importance of public interest journalism as a determinant of health.

And now for some satire…

Satirist @markhumphries takes a look at the editorial decision-making behind the @dailytelegraph's story about @billshortenmp's mother. #abc730 #auspol #Ausvotes2019 pic.twitter.com/IVfn6JZGWO