(A Federal Health Department response to this post was added on 18 April).

“Most experts would agree that the modest benefits of Tamiflu and Relenza, as reported by the review, do not justify the increased adverse risks, let alone the money spent on them…”

So says an NHS Choices analysis of an important systematic review published recently by the BMJ and Cochrane Collaboration, whose findings raise billion dollar questions about the global stockpiling of the antiviral drugs Tamiflu (oseltamivir) and Relenza (zanamivir) for use in large influenza outbreaks.

The review investigated the benefits and damage of the drugs in both adults and children and took into account new data that had previously been kept confidential by the drugs’ manufacturers: Roche (Tamiflu) and GlaxoSmithKline (Relenza).

It found that both drugs shorten the symptoms of influenza-like illness by about half a day in adults (but not in asthmatic children), compared to a placebo. There was no reliable evidence that either drug reduces the risk of people with flu being admitted to hospital or developing serious complications such as pneumonia, bronchitis, sinusitis or ear infection.

Used as a preventative measure, Tamiflu and Relenza slightly reduced the risk of developing the symptoms of flu. The review also found no evidence that these drugs can stop people carrying the influenza virus and spreading it to others. Tamiflu was found to slightly increase the risk of adverse effects such as nausea, vomiting, psychiatric and kidney problems in adults, and vomiting in children.

So how should Australian regulators and policymakers respond to these new findings?

Thanks to Professor Chris Del Mar, Professor of public health at the Centre for Research in Evidence-Based Practice, at Bond University, for compiling these questions below.

Questions I would like to ask the Australian Government

1              Will you review your decision to stockpile Tamiflu in the light of this Cochrane review update (suggesting that it doesn’t prevent complications from influenza)?

2              Do you see a problem with content experts saying that influenza has been shown in an observational study to protect patients hospitalised with influenza – in contrast to the Cochrane review?

3              How will you decide?
Listen to content experts? Or assemble a group of methods experts (such as the PBAC or MSAC — ie an assembly of suitable methodologists used to sifting evidence)?

4              Are you influenced by non-medical evidence factors (such as the political imperatives of wanting to be seen to be preparing for the worst, of doing something rather than nothing)?

5              Have you given sufficient thought to alternatives to a pharmacological ‘magic bullet’ – such as physical barriers (hand-washing, gloves, masks, gown and quarantining, which have been shown to be effective in another Cochrane review)?

• A fascinating piece by Ben Goldacre on how an online comment triggered an exhaustive scientific investigation into the evidence about Tamiflu.

• “Scamiflu” – by Sidney Wolfe in this article at Public Citizen

• The analysis by NHS Choices (extracts below) 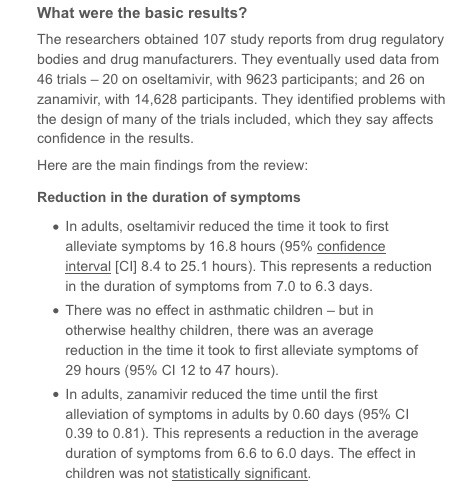 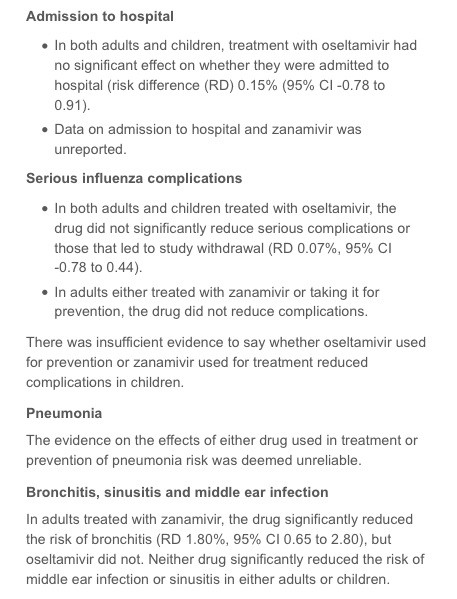 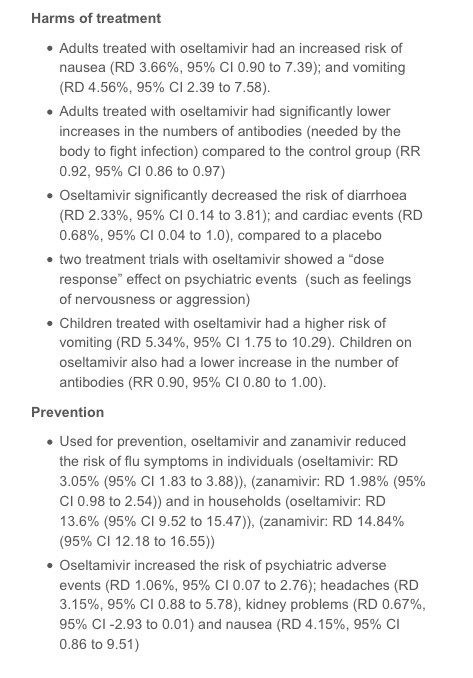 Antivirals and pandemic preparedness
·        The Department of Health welcomes the Cochrane Review into the effectiveness of antivirals in preventing and treating influenza.
·        Based on all available data, including the most recent Cochrane report, about these drugs, the Australian Government will continue to maintain its stockpile of the neuraminidase inhibitor antiviral drugs (oral oseltamivir and inhaled zanamivir), as a complement to influenza vaccination in Australia and other pandemic control measures.
·        The Australian Government believes that vaccination is the best way to prevent influenza, but vaccination alone cannot prevent all illness from influenza.
·        The Australian Government’s position is consistent with the current recommendation by the Centers for Disease Control and Prevention (CDC), USA, regarding the use of neuraminidase inhibitor drugs and their benefits in the prevention and treatment of influenza.
·        The Department continuously reviews available evidence and advises the Australian Government on policies as necessary on a range of health protection activities including antivirals.
·        In determining stockpile requirements and levels, the Department of Health consults with a range of stakeholders and takes advice from a number of key agencies including the World Health Organization.
·        The Department keeps abreast of pharmaceutical industry developments including supply chain matters.
·        During a pandemic, antivirals could be used as part of a suite of potential health protection measures designed to reduce the impact of a pandemic in Australia as articulated in the Australian Health Management Plan for Pandemic Influenza. This could also include vaccines, application of infection control, social distancing measures and nationally coordinated information and messaging.

National Medical Stockpile
·        The National Medical Stockpile is a strategic reserve of drugs, vaccines, antidotes and protective equipment for use in the national response to a public health emergency which could arise from natural causes or terrorist activities.
·        The total value of the stockpile is currently $192 million.
·        Antivirals were first included in the National Medical Stockpile in 2004 and continue to be a key item in the Stockpile’s pandemic inventory.
·        The Stockpile contains quantities of both Tamiflu and Relenza. The quantities are comparable with other nations’ stockpiles and are consistent with expert mathematical modelling on appropriate reserves for Australia.
·        The Department of Health has relationships in place with our state and territory counterparts and industry partners to enable the swift deployment of products from the Stockpile across Australia.
·        Detailed information on Stockpile inventory will not be publicly released due to security and commercial sensitivities.

Australian Health Management Plan for Pandemic Influenza (AHMPPI)
·        Australia has recently revised Australia’s Pandemic Plan and points being taken into consideration regarding antivirals include:
·        Antivirals can be used during a pandemic to treat infected cases or as a prophylactic for exposed contacts or those at high risk of exposure such as health care workers.
·        The use of antivirals aims to reduce the severity of illness and risk of infection, particularly in those at high risk of severe disease, potentially lowering the spread of the disease. A reduction in morbidity and mortality, and transmission will assist in minimising the impact of a pandemic.
·        Multiple factors influence the decision to use antivirals during an influenza pandemic, including the severity of the disease, the rate of infection and whether or not the virus is resistant to antivirals.
·        To obtain maximum value from antivirals, administration during the first 48 hours of illness onset is required. However, clinical benefits can be achieved beyond this timeframe.