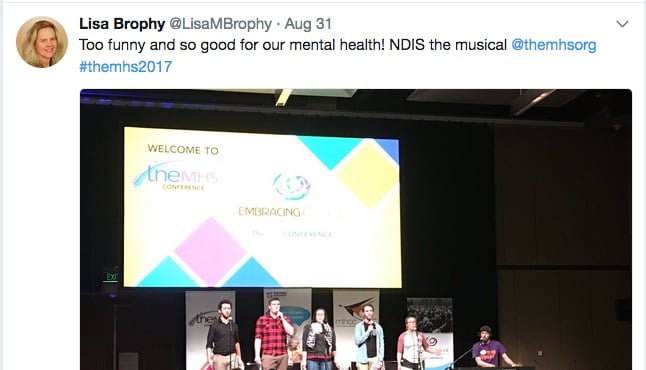 A recent mental health conference in Sydney provided an opportunity for a comprehensive reality check on progress with the NDIS, reports Amy Coopes for the Croakey Conference News Service.

Some of the successes, failures and ongoing issues of concern surrounding the NDIS are detailed in the #LongRead below.

The National Disability Insurance Scheme represents a watershed opportunity for those living with a psychosocial disability but there is real potential for people to slip through the cracks, with the rollout already leaving some behind as the states pull services and funding.

This was the message shared by consumers, carers, families and researchers working in the mental health space at the annual TheMHS conference in Sydney last week.

The NDIS was one of the featured symposia at the three-day event, which brings together hundreds of clinicians and health care workers, consumer-survivors, advocates, carers and academics to discuss developments in mental health.

There were several NDIS-themed sessions at #TheMHS2017, as well as a performance of NDIS: The Musical – an irreverent take on the scheme written by consumers for consumers for the Victorian Mental Illness Awareness Council (VMAIC). (You can watch a 2016 performance of the musical here)

Health Minister Greg Hunt set the tone for discussions, drawing applause by telling delegates the NDIS “should never have been used as an excuse to wind back psychosocial services”. Over the following days this emerged as a common experience, with those at the front-lines feeling the pinch as the scheme rolled out.

Eddie Bartnik, from the Government’s National Disability Insurance Agency, said the NDIS – “the biggest social policy reform since Medicare” – presented a raft of opportunities but there were also major challenges around coordination and integration.

Echoing the Health Minister’s sentiments, Bartnik said that the NDIS “was not intended to replace the supports or services being provided by mainstream services”, but help those eligible with social and economic participation though “ongoing functional support”.

Contrary to what had been assumed about the NDIS, he said it was organisations that were collaborating rather than competing that were doing well (see more tweets from his and other presentations at the end of this story).

Translating this into practice required navigation of what Walter Kmet from Western Sydney PHN described as a “cobbled road” of service fragmentation.

While the NDIS had the power to be transformative, Kmet said it would require looking beyond “doing things better with what we have to taking the system to a better, more relevant place”.

Strengthening the links between primary care – the “gatekeepers” – and mental health services would be essential in this task, he said, as would measuring and rewarding outcomes rather than inputs, or what one delegate described as “funding busyness”. 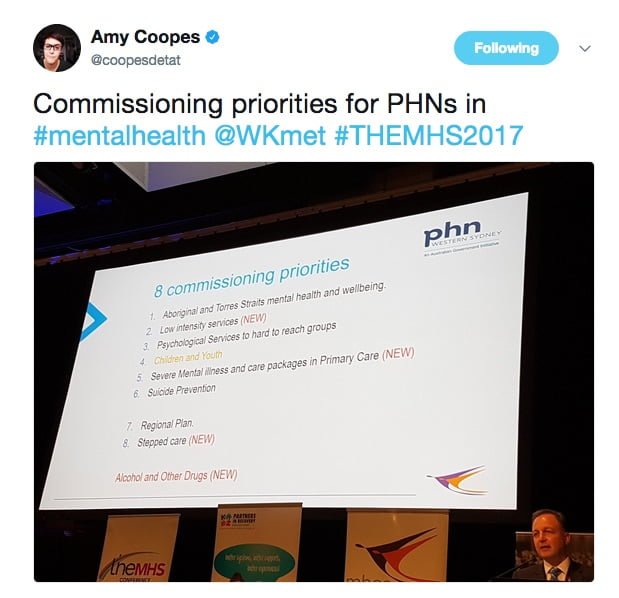 Amanda Bresnan, executive director of Community Mental Health Australia, told the conference that federal funding for mental health programs was being transferred to the NDIS and a flexible funding pool for PHNs to commission services through a stepped care model.

Bresnan said the concern was that not all people currently covered by federal programs such as Partners in Recovery, Personal Helpers and Mentors, Day to Day Living (D2DL) and Mental Health Carer Respite Support would not be eligible for the NDIS, and there was a great deal of uncertainty about what would be left for them as the states pulled service funding.

“Money should not be pulled out or shifted until we see the full picture of the NDIS,” said Bresnan.

Bresnan said the community mental health sector saw the NDIS as an opportunity to have a conversation about the evidence for services, and about roles and functions within the space.

“We need to look at the evidence, look at what consumers says they need, and use that to drive investment,” she said.

“There’s an opportunity for the NDIS to be not just a health response but a whole of community response” encompassing housing, employment and other factors, added Bresnan.

Dr Lisa Brophy from the University of Melbourne and Mind Australia presented research showing that three early interventions “ticked all the boxes” for the NDIS: social skills training, supported employment and supported housing.

These interventions supported recovery, were evidence-based and reflected personal choices and goals for those living with a psychosocial disability, said Brophy, pointing to loneliness, dealing with physical health or getting back to work or study as common experiences.

Brophy said it was “time for us to stop tolerating mediocrity” in mental health service provision and to stop underestimating the potential for people with a psychosocial disability to participate, issues she said were driven by stigma and discrimination.

She said advocacy needed to be built into the NDIS, with “staggered” experiences of acceptance into and navigation of the scheme reflecting inconsistent access to and funding for appropriate supports.

“Brokerage models are very problematic,” said Brophy. “People don’t need a broker, they need someone to build a relationship with, to help them meet their needs.”

Slipping through the cracks

Consumers and carers shared mixed experiences with the NDIS, with some reporting that it had already been life changing and others with stories of loved ones who had slipped through the cracks, Bresnan said.

One carer related her daughter having state-based services withdrawn because “you’ll be eligible for the NDIS”, leaving her housebound with little supports for going on several months while she waited to be assessed. In the meantime, the family had gone into debt to keep the basics covered.

Carer advocates Patricia and Sarah Sutton shared the story of Peter and Ben –sons and brothers living with schizophrenia – and their struggles both before and after getting onto the NDIS, and finding appropriate services.

“Not since Medicare has there been such a landmark reform for those in mental health as the NDIS,” said Sarah. “But psychosocial disability is still very widely misunderstood.”

The Suttons said the NDIS application process lacked relevance and accuracy for psychosocial conditions, where impairment “can be much less apparent on the surface” and could be a barrier to participating in assessments.

The episodic nature of conditions and concept of recovery made access problematic, and it was important to note that not every person with a mental illness had a psychosocial disability (defined as permanent or likely to be permanent), they added.

While the NDIS represented a potential “light at the end of the tunnel for people with a psychosocial disability”, the Suttons said it needed to break down systemic and structural barriers, and take family and carer voices seriously. 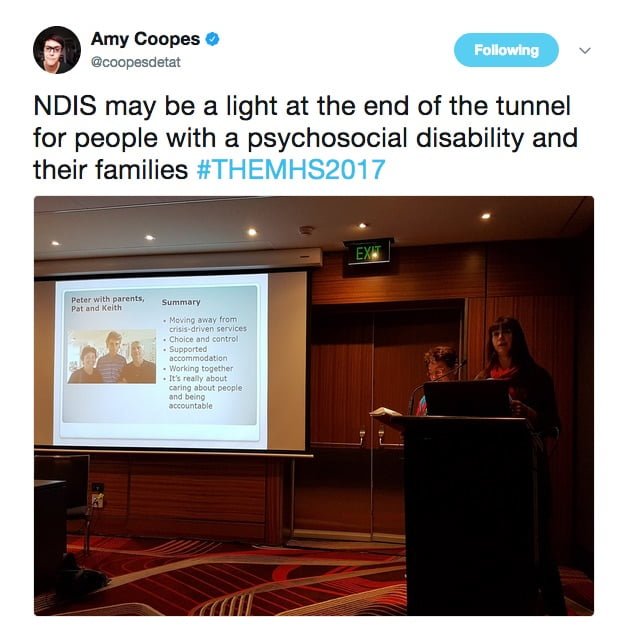 Elena Sutcliffe, policy officer with Being, said consultations with consumers had revealed a lack of or conflicting information about applying for the NDIS with a psychosocial disability, and many reported being knocked back the first time before going on to be successful with the help of an advocate.

It was a stressful and exhausting process, the NDIS language was not consistent with recovery-oriented practice, and pricing had a Western cultural bias.

Even when a ‘good’ package was obtained, there was a paucity of services to spend it on, and people feared that if they improved their package would be scaled back or withdrawn.

Consumers were also afraid of retribution in the form of service refusal for complaints or criticisms, Sutcliffe said. 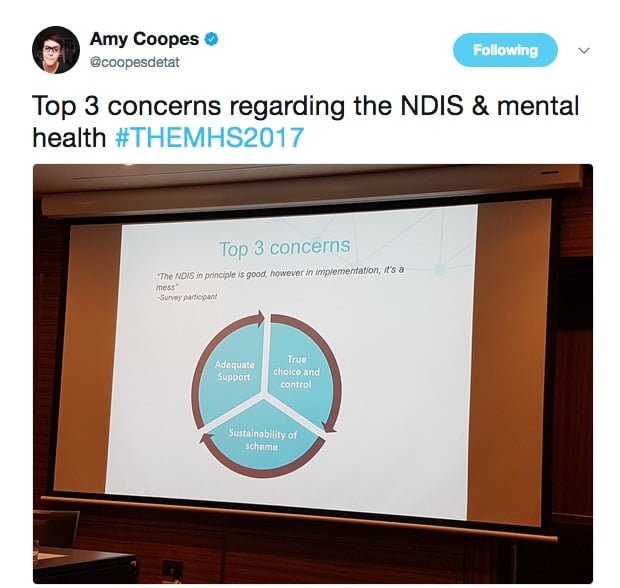 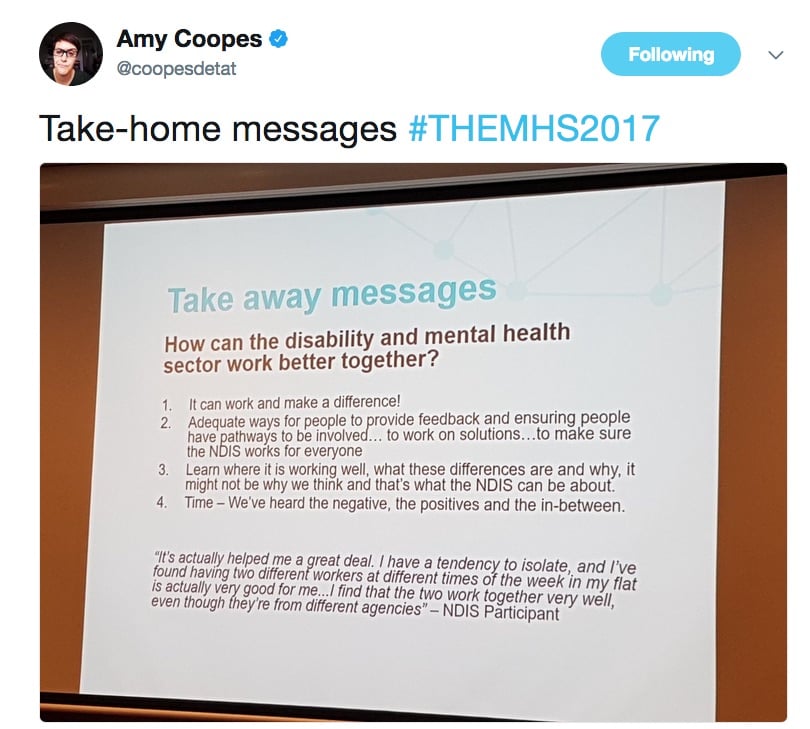 Debbie Hamilton, a consumer, said the mental health system was struggling to come to terms with the NDIS, and often found itself at odds with its central tenet – individual choice and control.

Restructuring in the sector due to the rollout was having an impact on the frontlines, with support workers not showing up, and Hamilton said NDIS literacy was a major issue, echoing calls for advocate funding.

Other consumers reported finding it impossible to get the NDIS to return calls or clarify concerns, describing the scheme as trying to do too much too quickly; a “rollout and run”.

From a rollout perspective, there were presentations at two sessions from trial sites in Victoria and New South Wales – one dissecting a failure and the other a success.

Kim Lane from Hunter New England Mental Health shared the challenges and lessons from a successful NDIS transition, which had so far seen 37 people at a 91-bed long-stay inpatient facility able to be discharged into the community.

Some of the factors she nominated as being instrumental:

Some of the challenges had included explaining the benefits to both consumers and staff, and having the facts and resources available to distil who would be eligible and how and where to go to fill out applications, and for information and support.

Ongoing issues included rejection by some consumers of the NDIS, ‘real’ collaboration with CMOs, staff education, a ‘shifting sands’ environment and market failure, with services not able to meet needs.

Asked for her advice to others confronting the rollout, Lane highlighted collaboration, family-inclusive and consumer-led practice and taking time, as well as review to ensure mistakes weren’t repeated and lessons were learned. 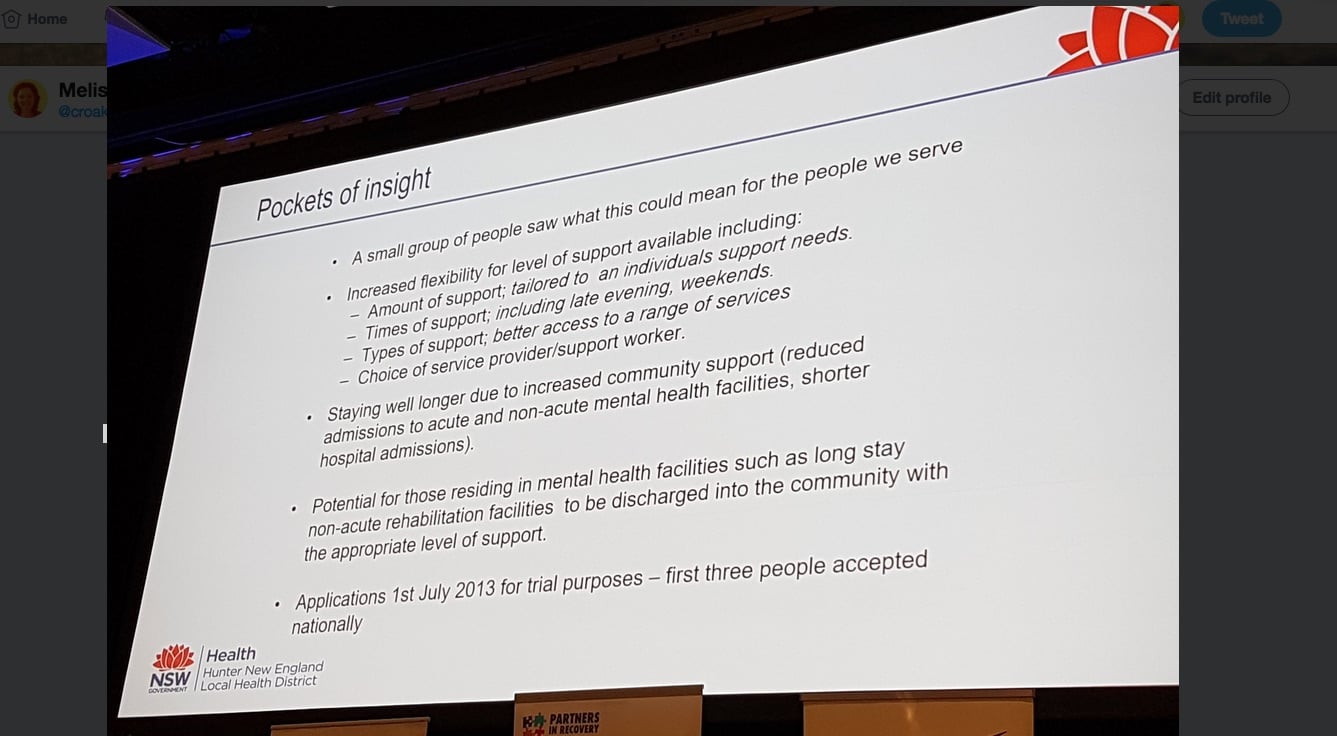 Priscilla Ennals and Glen Tobias from Neami National presented on the failure and their subsequent acquisition of Geelong provider Pathways following the NDIS trial, saying it had fallen victim to a combination of local issues, factors with the trial (including psychosocial disability being ‘tacked on’) and provider issues.

Though well intentioned, by trying to minimise the impact to consumers of a huge discrepancy between their pre and post-NDIS funding (from $104/hr to $42/hr), Pathways ultimately went under.

In its place, Tobias said Neami set up a streamlined, NDIS-ready organisation called Me Well, taking the lesson that “transformation rather than transition” was required.

Me Well used a mobile workforce with client database and case notes on tablets, bumping up billable hours to 90 percent.

Staff were recruited on a self-motivation and growth mindset as well as competence, and Tobias said in future an “Uber-style” rating technology could be on the cards

He said the NDIS was very much a “retail offering”, a way of operating which established organisations were not familiar with. (Check this Twitter discussion on consumer rating systems.) 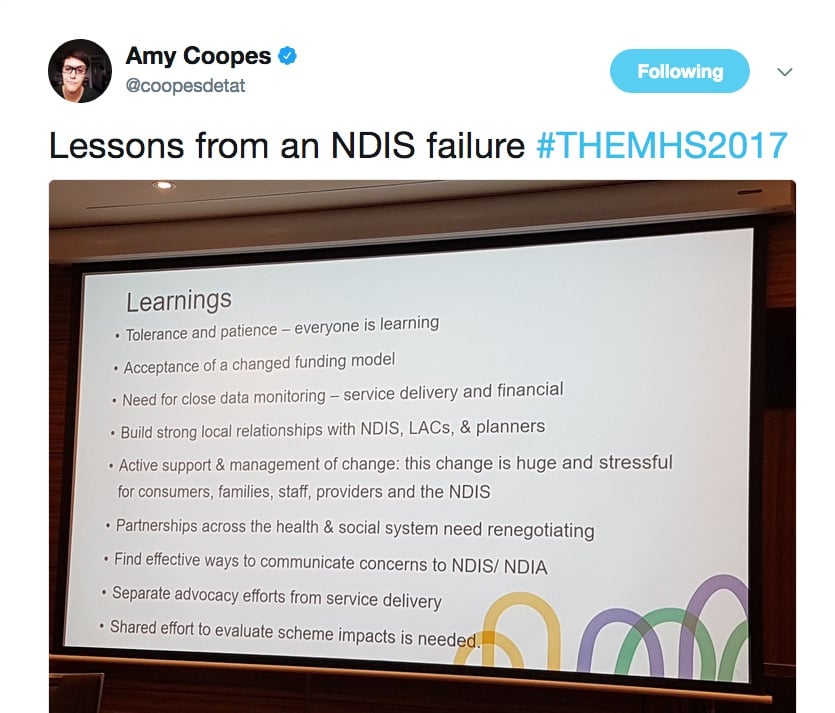 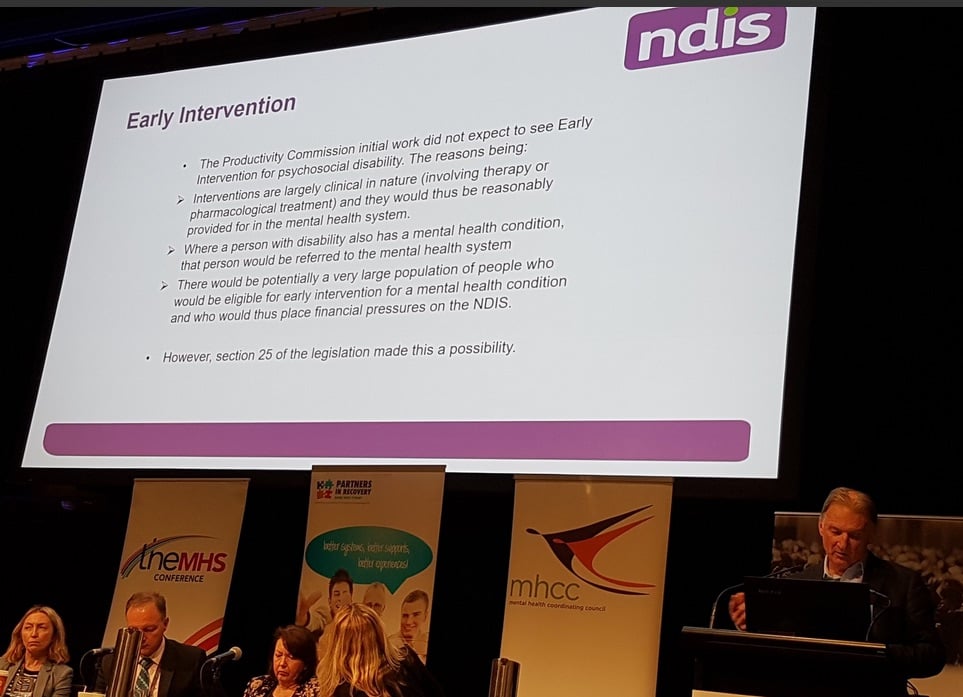 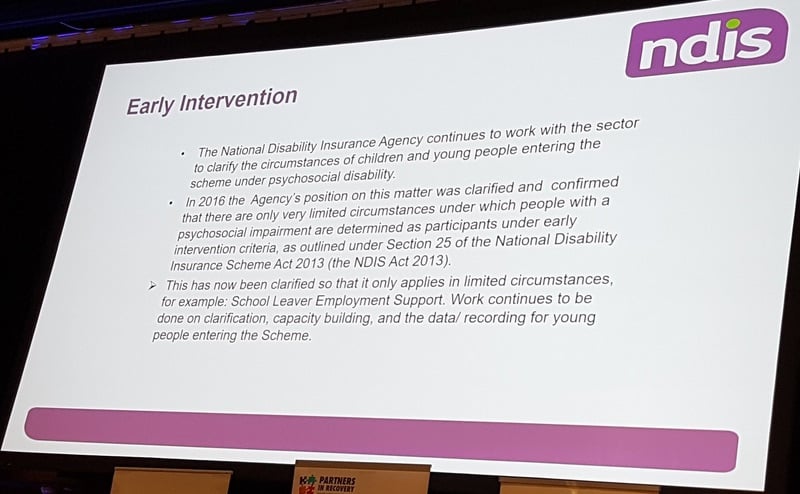 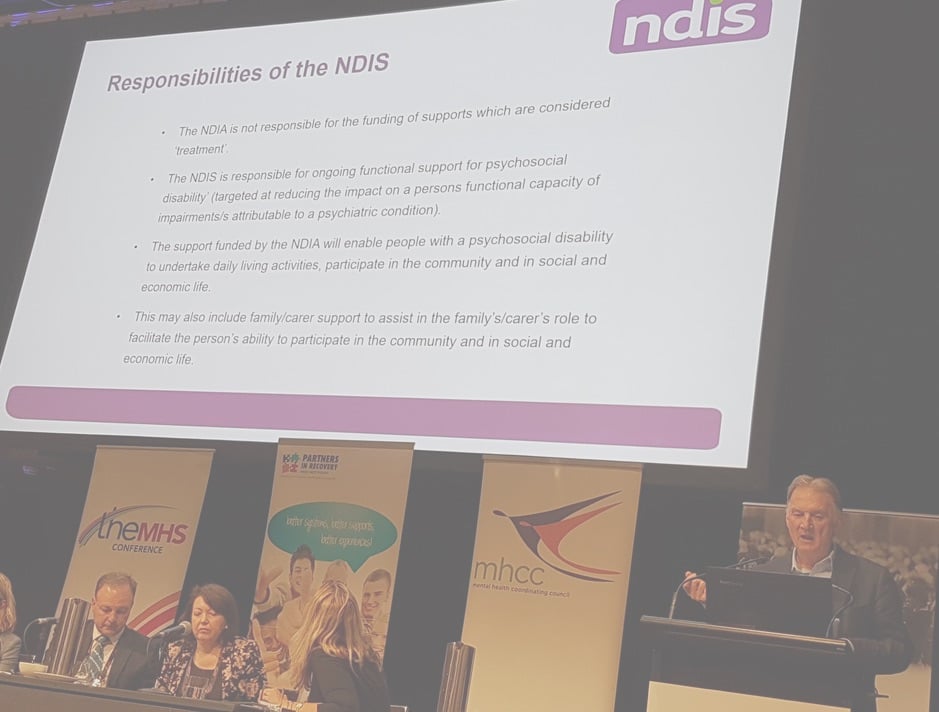 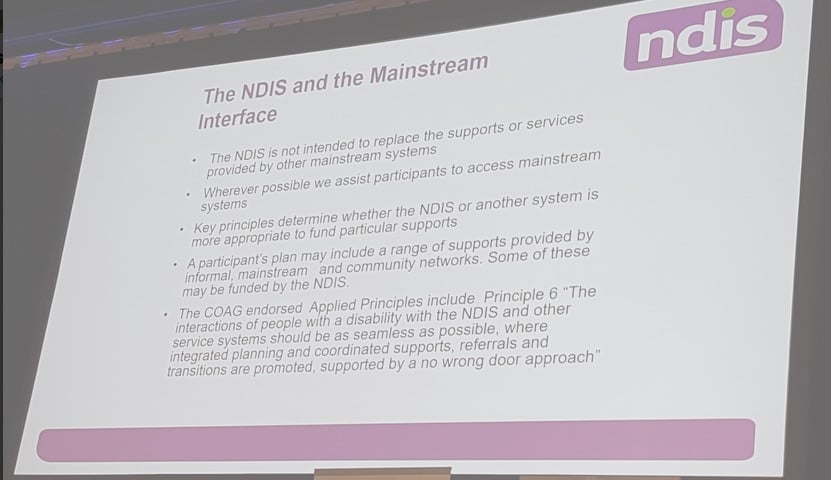 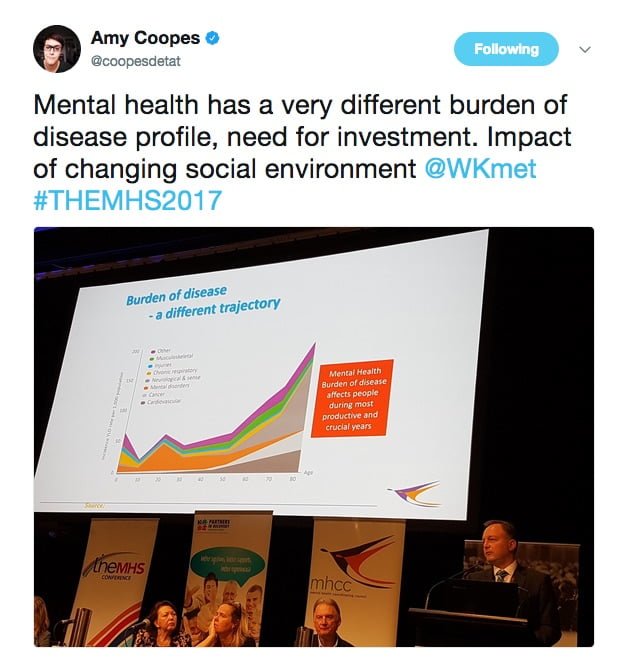 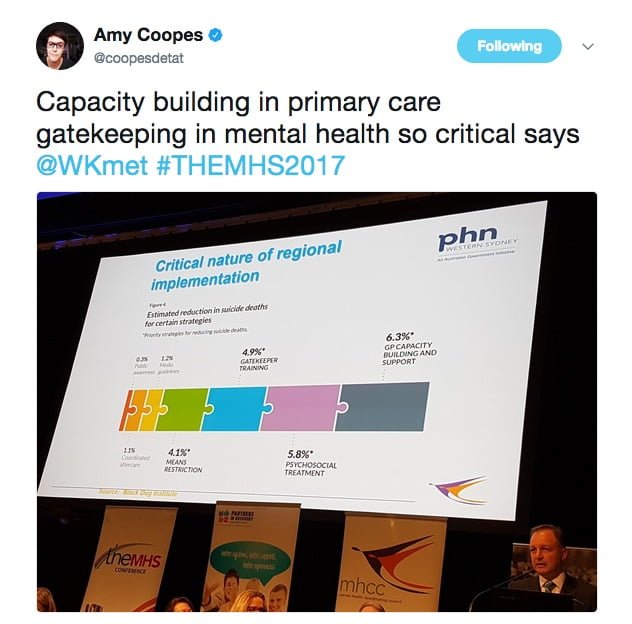 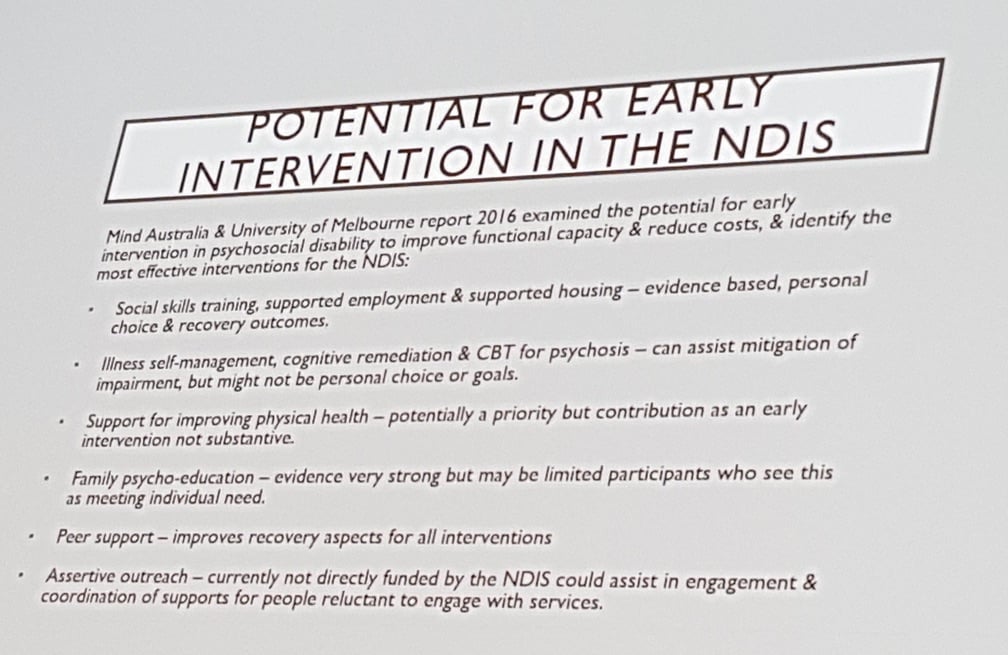 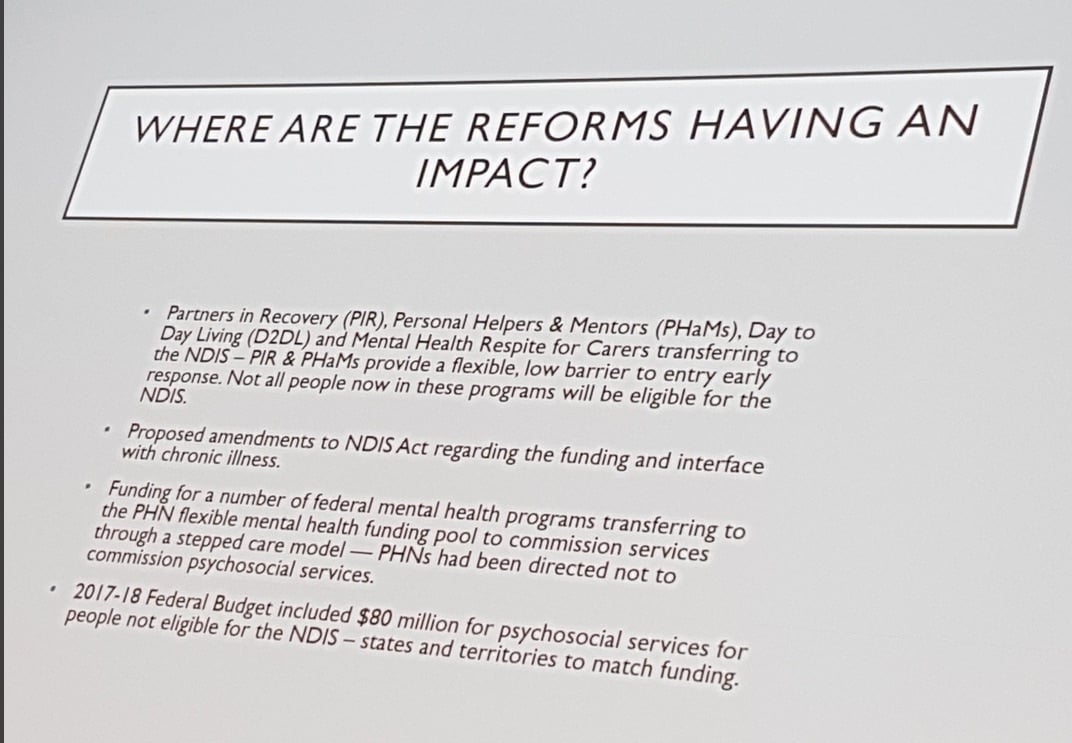 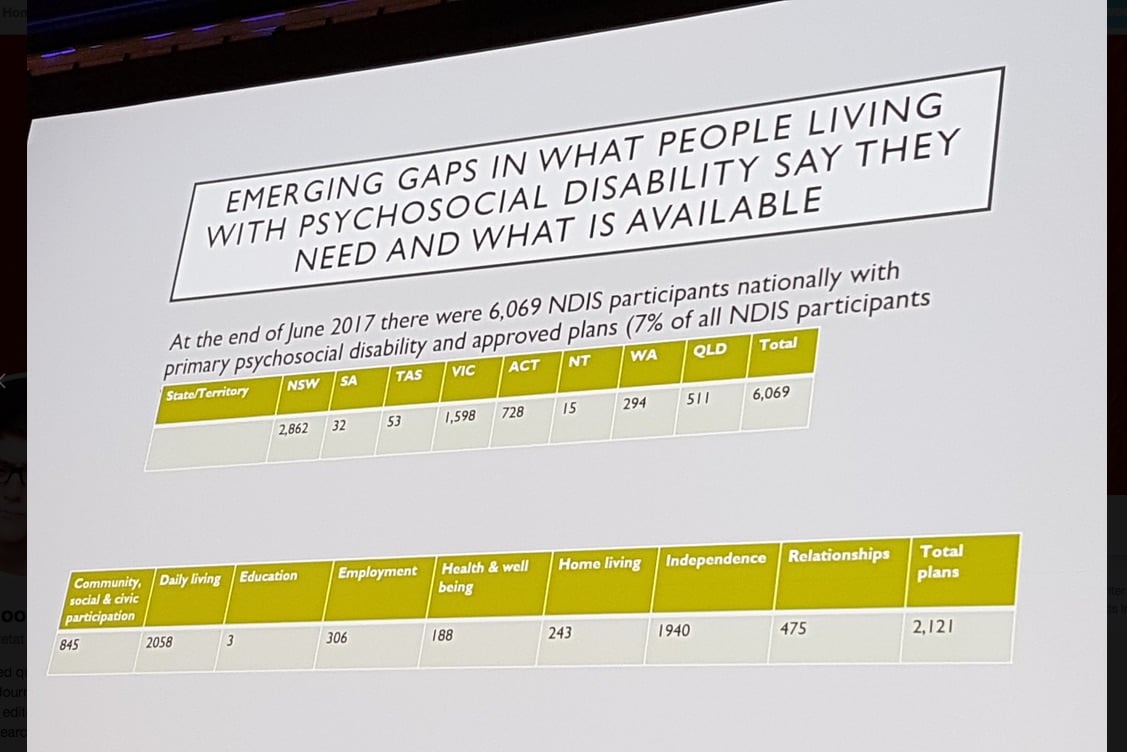 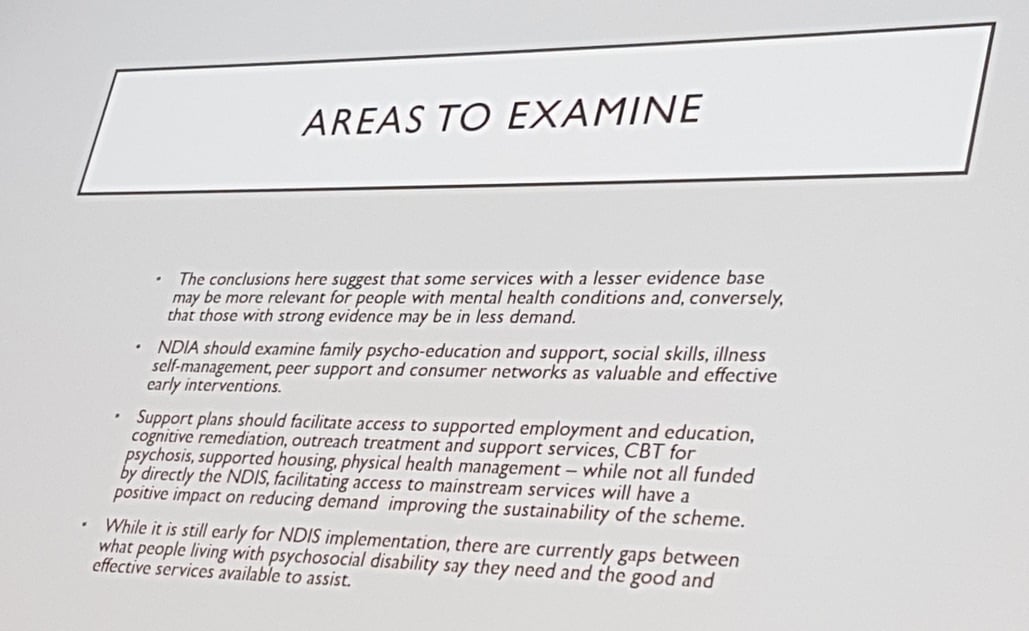 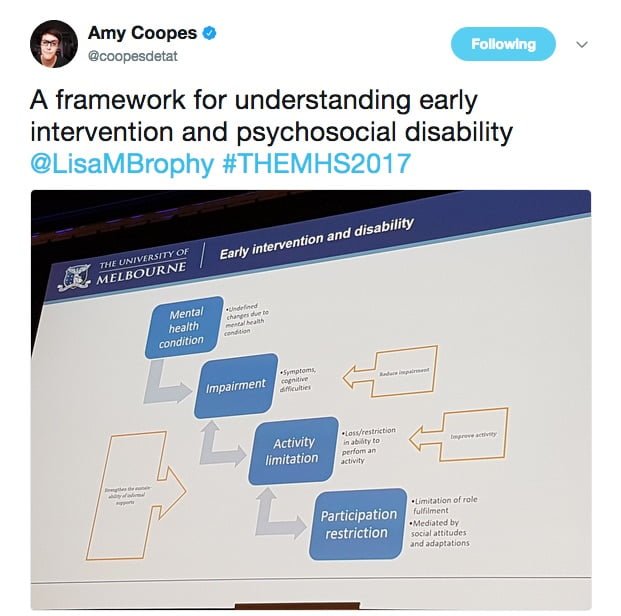 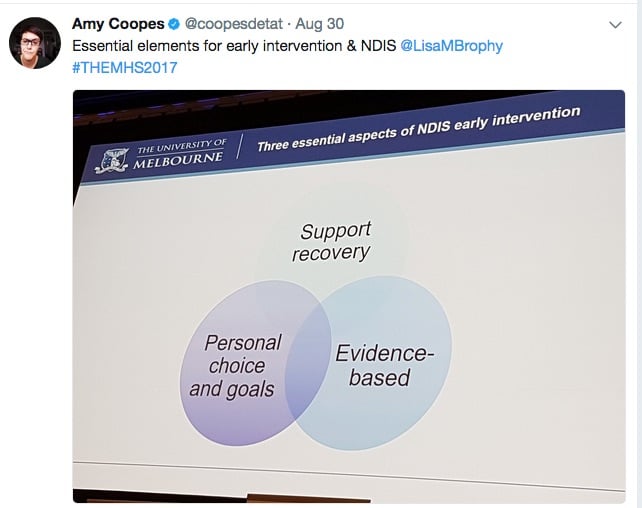 Bookmark this link to follow Croakey Conference News coverage of the conference – Amy Coopes has more stories to come!