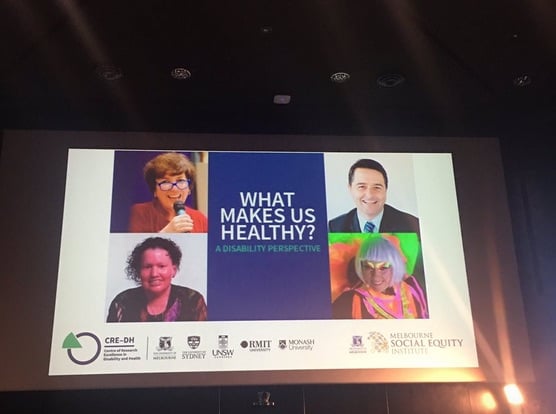 As the first of its kind internationally, the Centre of Research Excellence in Disability and Health (CRE-DH) is Australia’s new national research centre to improve the health of people with disabilities.

The CRE-DH, in collaboration with key stakeholders, will gather the evidence needed to guide social and health policy reform.

The CRE-DH’s Celia Green and Zoe Aitken explain how the organisation will work in the article below, cross-posted from The Power to Persuade.

(Beneath their article, see some tweets and photos from the recent launch.)

A new national research centre to improve the health of people with disabilities was launched on 27th June 2017 at the University of Melbourne by Disability Discrimination Commissioner Alastair McEwin.

The Centre of Research Excellence in Disability and Health (CRE-DH) brings together researchers from the University of Melbourne, the University of Sydney, Monash University, University of New South Wales Canberra and RMIT University working on a program of research to identify policies that improve the health of people with disabilities in Australia and that provide value for money.

The event was hosted by Julie McCrossin, and guest speakers included the Disability Discrimination Commissioner Alastair McEwin, performer Emily Dash, and journalist and appearance activist Carly Findlay, speaking about their personal experiences of health and happiness.

Performer Emily Dash explained that, for her:

Health is not absence of illness […] it’s about having meaningful roles in our society. So for me, that means, for example, having meaningful connections – relationships are really important to me – and also finding work and finding ways to spend my time.”

The health of people with disabilities is poorer than non-disabled people across most health outcomes, including those unrelated to their impairment. They have higher rates of chronic conditions such as diabetes and hypertension, poorer mental health, and poorer access to preventative health care.

As Professor Anne Kavanagh, the lead investigator of the CRE-DH reported:

We know that people with disabilities have poorer health, and often it’s unrelated to their underlying disabilities. A lot of those differences are related to the social determinants of health, be they employment, housing, education, policy, discrimination.”

Australians with disabilities are more likely to be unemployed, live in inadequate and unaffordable housing, have not completed school, and live in financial stress. They may face discrimination in all aspects of their lives including their experience at school, with the health system, getting a job, and their family situation. All of these aspects contribute to their poorer health.

Disabled Australians fare particularly badly in global terms – they have the lowest relative income and one of the lowest levels of labour force participation out of all the OECD countries.

Yet Australia currently lacks evidence on how to target health and social policies to improve the health of disabled Australians by reducing social and economic disadvantage.

As the first centre of its kind internationally, the CRE-DH in collaboration with key stakeholders will gather the evidence needed to guide social and health policy reform with the explicit intent of reducing the avoidable (inequitable) health and wellbeing disparities between Australians with and without disability.

However, while “evidence based policy” has become a popular theme in the development of contemporary Australian policy, as recognised by researchers at the Centre, “evidence…never speaks for itself”  but is always situated within the social and political context of its production and current knowledge consumption practices.

Complex or “wicked” policy problems can also create a lack of authority for evidence as well as for who is acknowledged as an expert in a particular area.

Evidence alone is not enough

Thus on its own, producing a strong evidence base is not enough to ensure this evidence will be utilised by policy makers, or influence policy reforms. Any research endeavour which seeks to inform on policy therefore requires not only an evidence base, but insight into the policy process in which this evidence might (or might not) be used.

Through the inter-relationships between four work programs, the CRE-DH is taking an innovative approach to combining the production of evidence with analysis of the ways in which this evidence can be most effectively used to guide policy reform.

Policy creation is a complex, dynamic, and iterative process, and robust policy analysis requires knowledge of the historical, social, and institutional contexts in which past policies have been embedded  and an awareness of the values, goals, and perceptions of the actors involved, who are all seeking to promote their particular policy agenda.

In order to gain an indepth insight into current and emerging policy concerns in health and disability, the Policy Reform workgroup will create an “expert policy lab” consisting of 40 influential policy actors from a range of contexts including government, advocacy, service provision, business, and academia (inclusive of people with a lived experience of a disability).

Utilising a Policy Delphi methodology, twice yearly data collection (interview and survey) will be collected from the expert group over a five-year period. A variation of the traditional Delphi Method, a Policy Delphi study uses an iterative process whereby a series of interviews or surveys are used to gather information from a group of anonymous experts, with feedback from previous interview rounds provided to the group after each round in order to generate discussion.

The strengths of adopting a Policy Delphi approach are that ideas for policy reform can be examined over an extended period of time and reassessed in the light of new evidence presented to the group. This helps ensure that all possible options have been highlighted for consideration, allows for creation of an estimate of the impact or consequences of proposed options, and provides awareness of how acceptable particular options are to policy makers.

Thus the policy lab will act as a forum for ideas between policy actors and provide an understanding of how problems are conceptualised and addressed within disability and health policy networks.

Data generated from the policy lab will be fed back to the other work groups in order to facilitate and guide evidence and knowledge production, which will in turn be presented back to the expert policy group for discussion.

In this way, a dynamic feedback loop between all work programs will operate over a sustained period, creating a multi-disciplinary, cross-sectoral exchange of knowledge.

It is through this coupling of the production of research evidence with knowledge of the attitudes, beliefs, and concerns of key policy actors that the CRE-DH hopes to break new ground in being able to identify not only effective, but implementable policies to improve the health of Australians with a disability. 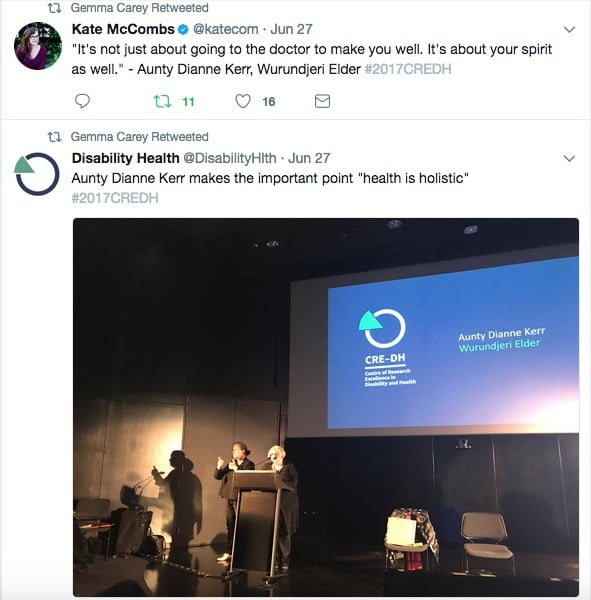 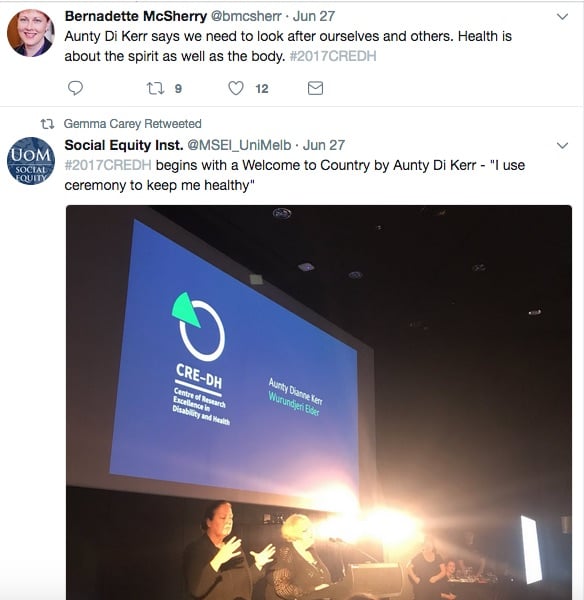 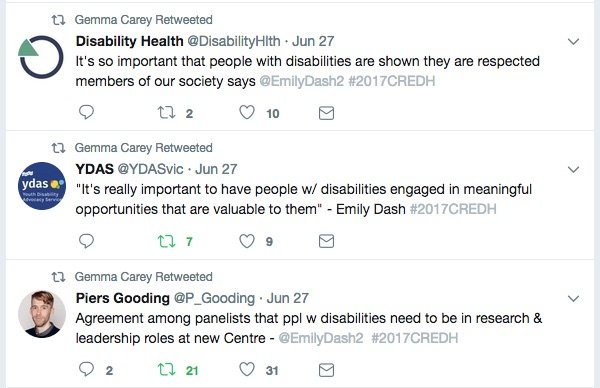 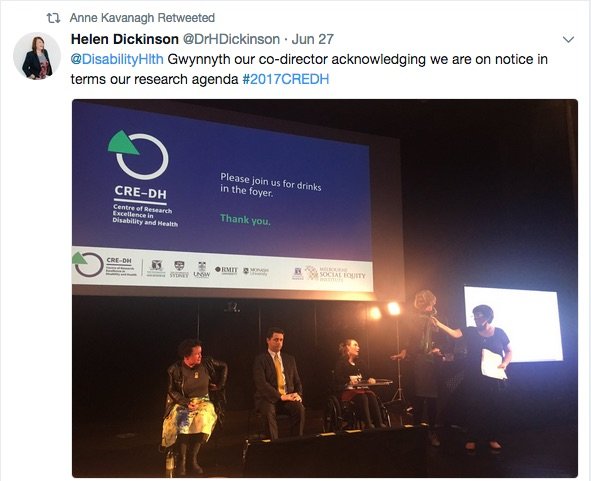 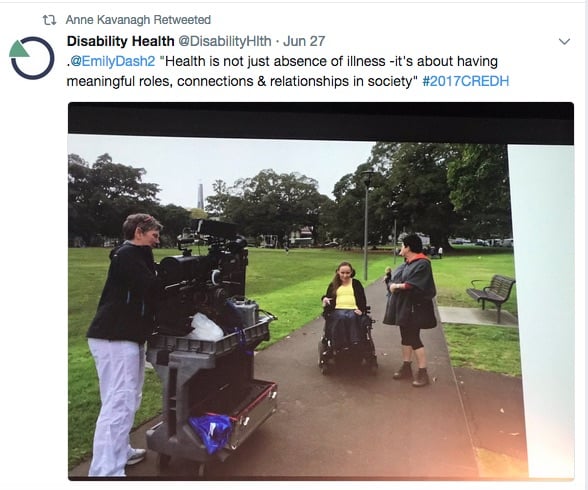 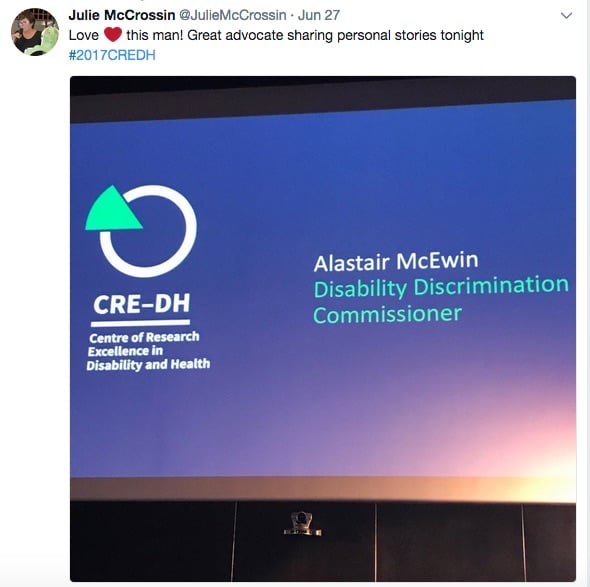 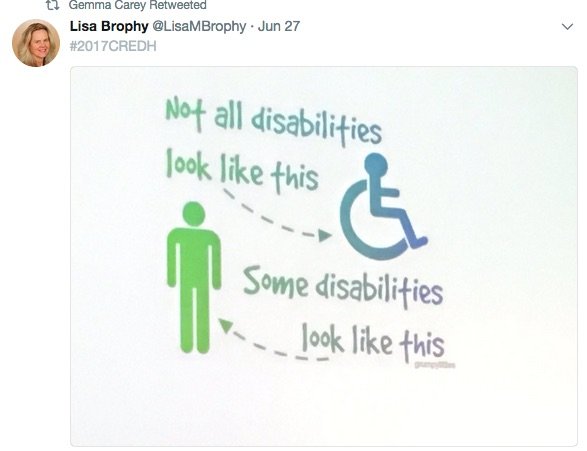 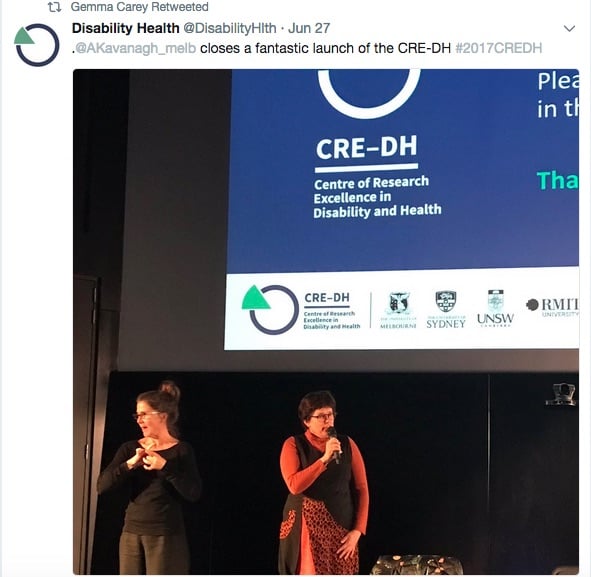