“An opportunity for the Federal Government to listen” – launching JustJustice

The #JustJustice book is being launched at Gleebooks in Sydney today by Professor Tom Calma AO, and Croakey readers are invited to download the 242-page e-version.

For news about the launch, follow #JustJustice on Twitter; we also hope to do some live Periscope broadcasts. As well, during the week ahead, Summer May Finlay and Dr Megan Williams will be tag-tweeting about #JustJustice from @WePublicHealth.

We warmly thank all who have contributed to the #JustJustice project, including the authors, tweeters, donors and supporters.

We also thank journalist Amy McQuire for covering the book on radio at Let’s Talk, and hope other media outlets will also engage with the issues raised in the book.

The Federal Government must make good on its promise to listen to, and work with, Aboriginal and Torres Strait Islander people, including engaging with the solutions put forward in the forthcoming #JustJustice essay collection.

The book includes more than 90 articles on solutions to protect the rights of Australia’s First Peoples. These include pieces by Amnesty’s Indigenous Rights Campaigners Roxanne Moore and Julian Cleary, who offer solutions to the stark overrepresentation of Indigenous children in detention.

In the book, Noongar woman Roxanne Moore decries the solitary confinement, teargassing and use of dogs against children in the Don Dale Detention Centre. She lays out how Australia has breached international human rights law by detaining Indigenous children at astronomical rates, and through the harsh treatment and conditions endured by children in detention.

#JustJustice articles by Julian Cleary also condemn the detention centre, and call for funding to be shifted into youth services and programs to keep kids out of detention in the first place. He writes that the ‘lock-em-up’ punitive approach has failed to heal trauma in Indigenous people in detention, and argues that Indigenous kids respond best to Indigenous role models.

He acknowledges the vital work of Indigenous people and organisations around the country – from rapper Briggs in NSW, to the Darwin-based Larrakia Night Patrol and the Victorian Aboriginal Legal Service.

Amnesty International research has found that Governments’ best chance to reduce offending and lower Indigenous incarceration rates is to fund prevention and diversion programs led by Indigenous communities. Indigenous-led, therapeutic programs best connect with Indigenous people, helping them to heal their trauma and deal with the life problems that lead to offending in the first place.

In a statement last week, Indigenous Affairs Minister Nigel Scullion expressed the Federal Government’s commitment to “genuine partnership” with First Peoples. He stated the Government’s determination “to listen and to understand to ensure we get it right.”

“This #JustJustice collection represents one opportunity for the Federal Government to listen and to understand,” said Roxanne Moore.

“Across the country we’re seeing unacceptable rates of Indigenous children being separated from their families and locked up. At the same time, Indigenous people also experience violence at far higher rates than the non-Indigenous population. This is not just a Northern Territory injustice – it is nationwide and Prime Minister Turnbull must seek national solutions.

The CATSINaM statement can be read in full here. 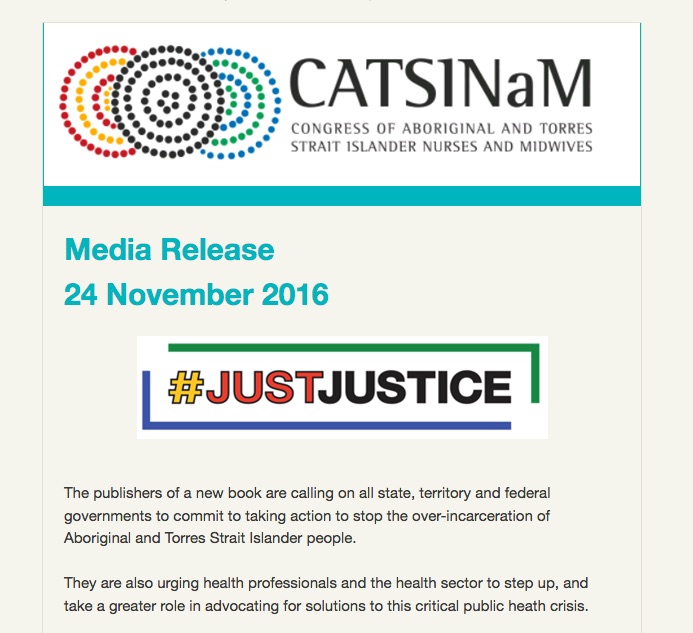 PrevPreviousBehind the scenes, with JustJustice
NextAre these the best ways to get Australia’s health on track?Next