An “underground insurgency” that is transforming agriculture and health

The transformative practices of regenerative farmers were recently profiled at the Oceania Eco-Health Symposium and Workshop, “Linking Peoples, Landscapes, Health and Wellbeing”.

For Colin Seis, it was a devastating bushfire that sparked his move from traditional “industrial” farming to being part of an “underground insurgency”, a small but growing group of Australians at the forefront of a new approach known as “regenerative agriculture”.

“We lost nearly everything,” Seis told the 2013 Oceanic Eco-Health symposium of the impact of the 1979 bushfire on Winona, his property in the Central Tablelands of New South Wales.

“We talk about ‘low input agriculture’ now,” he says of moves to reduce the use of chemical fertilisers, insecticides, and herbicides.

“I had to develop ‘no input’ agriculture because we had nothing left, the only way to survive was to spend nothing.” He went “absolutely cold turkey” on using fertilisers on his pasture lands, the first step in a wave of changes that now attracts international interest for his pioneering pasture cropping approach.

For David Marsh, the transformation was more cumulative, but this photo (below) from his Boorowa property, also in New South Wales, was a big catalyst.

“This is how badly I was farming in 1982,” he told the symposium. “I’m a bloke who then loved the land as much as I do now, but this is what came from not making proper decisions…It’s a pretty miserable portrait of me as a farmer. Every time I put this image up, I really feel ashamed.” 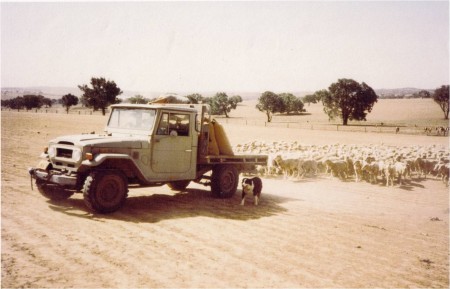 The ‘after’ photo, however, tells just as much about the capacity of land to regenerate. 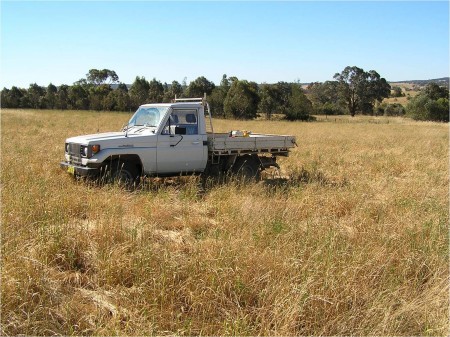 The work of Seis and Marsh and dozens of other “regenerative” farmers has been studied by author, researcher and farmer Charles Massy for his PhD thesis: Transforming the Earth: a study in the change of agricultural mindscapes.

They are, he says, at the forefront of a “new broad-acre, ecologically oriented agriculture that is both regenerating degraded landscapes and delivering high levels of healthy food and fibre production sustainably”.

Massy’s four year research project also has been the launchpad for the fledgling Alliance for Regenerating Landscapes and Social Health (ARLASH), a collaboration of farmers, scientists, educators, Indigenous leaders, health and environment practitioners and others which is expected to take on a formal role next year.

“I strongly believe we’re talking about revolution and metamorphism here,” Massy told the symposium. “I call it an underground insurgency.”

It’s also leading to broader understanding and connections with Indigenous Australians and their relationship to place and Country.

Massy pointed to the recognition recently by Bill Gammage about the role of fire-stick farming, as:

‘One  of  the  most  sophisticated,  most  widespread  and most  complex  of  continent-wide,  sustainable  combinations  of  land-use  practices  devised  anywhere  on  Earth’   and  so  as  to  make  resources  ‘abundant,  convenient  and  predictable’.

Author of the acclaimed Breaking the Sheep’s Back about the collapse of the Australian wool industry, Massy’s starting point with this research project was in seeing agriculture as a major contributor to environmental degeneration (see the slide below) but also as a solution.

“We could probably halve the national health bill if we all ate healthy food off biologically active soils,” he said. 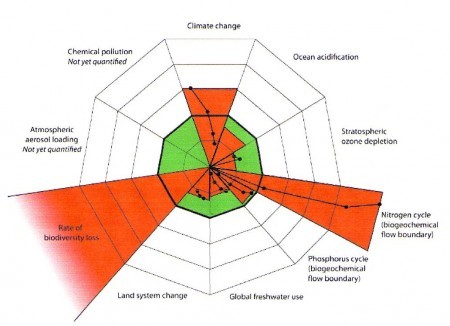 The focus of his research was on the social: what it was that shaped mainstream views about industrial agriculture and what promoted a “radical change” in world views, values, ethics, behaviour and land use practices.

He “quickly realised that crucial to getting inside farmers’ heads was their language and metaphors. Metaphorical thinking leads deep into our cognitive neural networks, our personal constructs. It’s where we construct reality in our heads,” he said.

“Many of us still haven’t mentally, ecologically, empathetically arrived in Australia yet,” he said. “This is despite lots of knowledge re soil erosion, especially deep complex Indigenous knowledge that goes back over millennium.”

His research mapped a shift from the “organic metaphor”, of nature as nurturing mother, to be revered and respected – epitomised in the Indigenous concept of Country –  to a “mechanical metaphor” and its sense of nature as a risk to be dominated, controlled and exploited for wealth creation, with ‘man’ as “outside and above nature”. 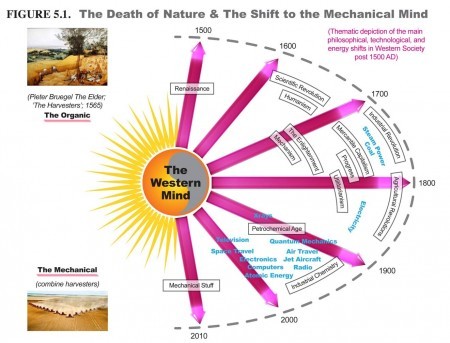 It is, he says, to be seen in much of the advertising for agricultural products. 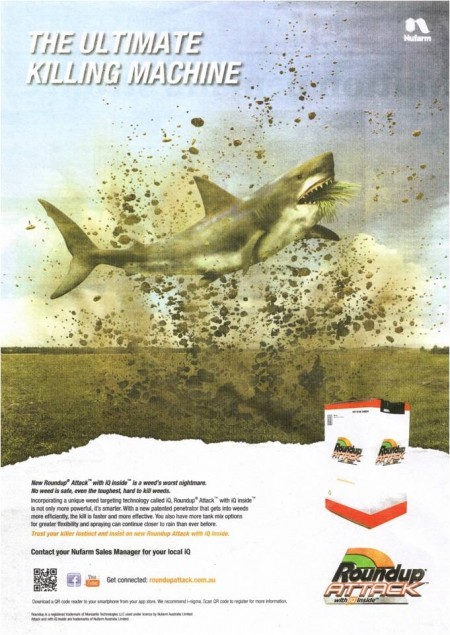 By contrast, he said, regenerative farmers used “neo-organic metaphors”: decisions embedded in ecology and community, out of strong ethics regarding  land, community,  healthy  food,  soil  health, and biodiversity, with huge respect for ‘Mother Nature’ and her organising systems, and a capacity to live comfortably with complexity, paradox and the unknown.

Sixty per cent of the 70 farmers he studied made the change as a result of a “life shock which opened up their minds”.

“What goes on in our heads does have huge consequences for our landscape and food quality, and thus major implications for human and social health.”

Interestingly, all three farmers told the symposium that while there was much national and international interest in their work, few of their neighbours – including Seis’ two older brothers – talked to them about it.

Massy cited one workshop leader who always requested farmer’s wives to be present, saying it was women who were worried about the impact of chemicals.

Marsh adds: “I have great neighbours but none ever talk to me about what we’re doing, even when their farms are incredibly bare.

“For many, what they are doing is what makes sense in the world for them. As Charlie says, change is a deep social question: most people won’t change what they’re doing unless they’re in the throes of dying or going out of business. We seem to need tension to make a change.”

David Marsh would have once said his family were managers of sheep and producers of crops and wool. “Now we say, we’re managing sunlight, plants and time,” he says. 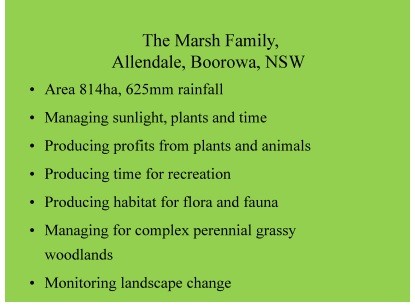 The family’s priorities now also include “producing time for recreation”.  He notes: “When we were going hell for leather (with the old model of industrial agriculture), I was so busy I had no time to think.”

Now he’s a voracious reader, whose new approach to farming has been developed through “gobbling up” the work of a series of thinkers, from James Lovelock and Aldo Leopold to Tim Flannery and Jared Diamond.

Marsh explains his conversion to regenerative agriculture as understanding where the “natural capital” is in our landscape, pointing to this image: 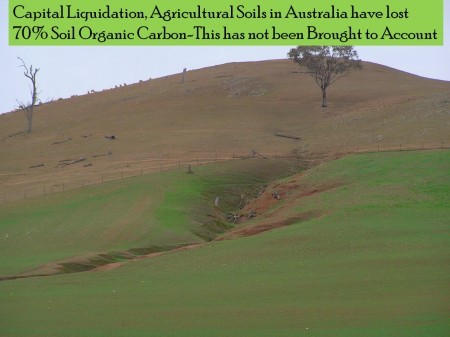 “What’s happening is we make money doing that, call it income, but in actual fact, many of our soils, whether grazing or cropping, have lost up to 70 per cent of their organic carbon which is their natural capital – that’s the soil ‘bank’,” he said.

“So actually we’ve been living off our capital …we’ve got to try to learn to farm using contemporary (non fossil fuel) energy and harvest just the interest out of the landscape.” 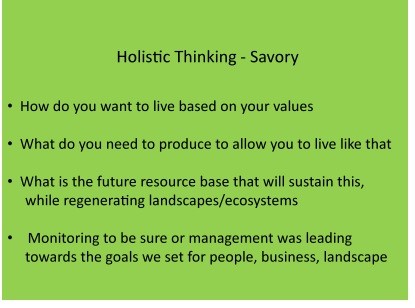 And it’s paid off, he said, presenting a series of slides on the impact of managing stock so that pastures are able to recover from grazing. They show that green plants and full ground cover are possible, even in the extremes of the 2002-10 drought, and all without the use of pesticides and fertilisers which has seen the farm’s energy bill cut over the past 15 years by 95 per cent.

“In eight years of drought, we matched our livestock to the available resource. This meant we didn’t lose ground cover, and didn’t have to spend a cent on feeding animals. It saved us between $500-800,000,” he said. “We would have gone out of business if we had kept doing what we had been doing previously.”

This article in The Land describes that approach in more details, and also maps the Marsh’s other successes: the diverse species of plants, birds, and fungi now to be found on the property, and  rising organic carbon levels in the soil.

“Instead of trying to bend nature to our will, we’re trying to fit in with the way the world works”.

Colin Seis says too many farmers have forgotten that “agriculture is about food”. With the reduction in nutrients in fruit and vegetables that are farmed on industrial scale these days, he notes it’s possible today to buy an orange that contains no vitamin C.

“Most of what agriculture produces now makes you sick,” he says, describing a system he sees as governed by “the ‘more on’ principle” where we add chemicals to solve ecological problems. “When we talk about how do we feed nine billion people, no one ever mentions whether we’re going to die from the food they are going to supply to us!”

Like most other farmers, the Seis family had successfully used industrial agricultural methods at Winona in the Central Tablelands of New South Wales, although high levels of fertilisers and pesticides were costing the current equivalent of around $80,000 a year.

Things started to get tough in the 1970s as fertiliser and sowing costs rose, rainfall no longer infiltrated, soil lost structure and became acid, salinity problems grew and trees were dying. “We were going broke,” he said.

Then came the 1979 bushfire which changed the way he farmed, and saw the introduction of “pasture cropping – a technique of sowing cereal crops directly into native perennial pastures to combine grazing and cropping into a single land use method where each one benefits the other economically and environmentally.”

Is it profitable and productive? This is the slide that most other farmers are most interested in, he says: 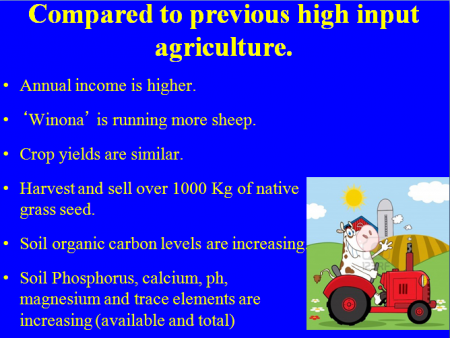 “Agriculture doesn’t have to go backwards,” he said. “It can be restoring and regenerative. Agriculture and sound ecological practices should function together.”

Read a range of case studies about regenerative farming at Soils for Life, including at Beetaloo Station in the Northern Territory where change is being rolled out on a million hectare plus property

More reading: Soils for life for a better world.

And some tweet-reports from the conference (click on images to see larger version): 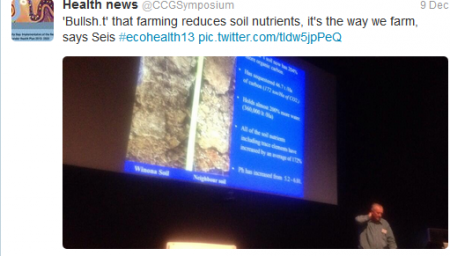 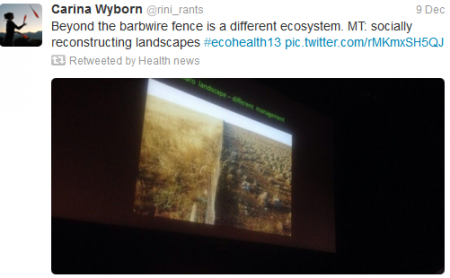 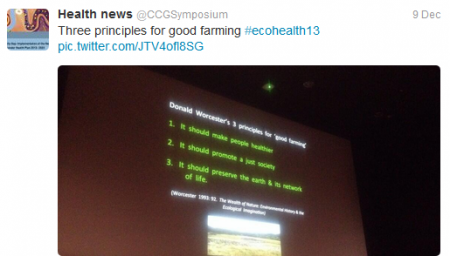 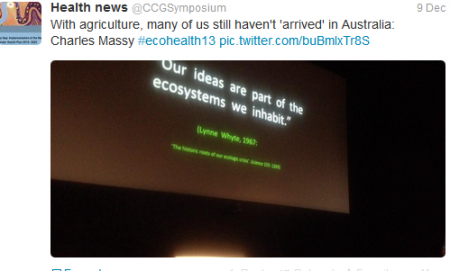 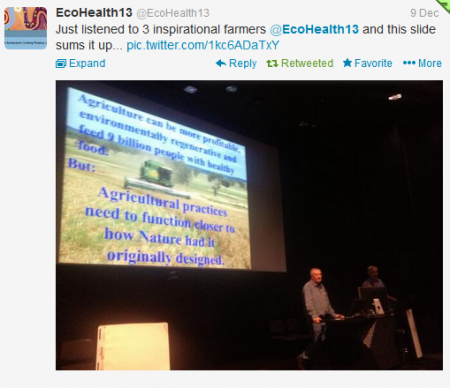 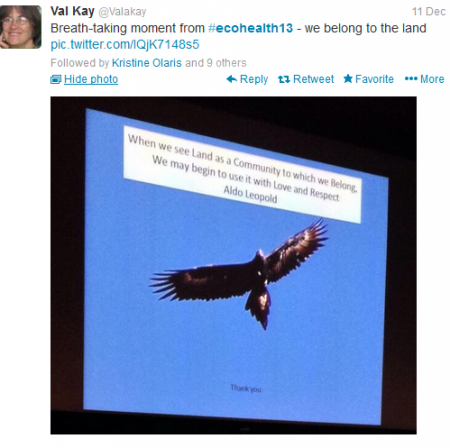 PrevPreviousFrom the Twitter stream to the Brewarinna Fish Traps: linking history and health
NextThe mental health toll of policies that seek to keep people “out of sight and largely out of mind”Next