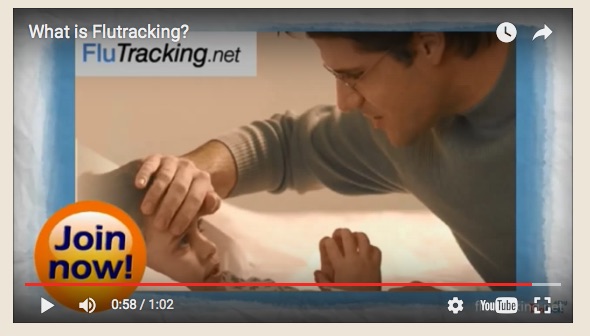 Every Monday morning during winter, thousands of Australians contribute to an online project tracking symptoms of influenza – Flutracking.

The project has brought some unexpected health benefits, reports Dr Craig Dalton, public health physician and conjoint senior lecturer, School of Medicine and Public Health at the University of Newcastle.

The project’s experiences seem to be in line with other evidence about the benefits of altruism – that “it’s good to be good”.

When our app developer finished the final line of coding for Flutracking back in 2006, he turned from his computer and announced to the office: “I’ve just wasted three months of my life. No one will ever answer this survey.”

A few weeks later, more than 400 people had signed up.

Over the years they have invited their friends, colleagues and families and the numbers have grown – and the overwhelming majority of them take part most weeks.

It was clear there was something about the project that motivated them. Appeals to worksite wellness officers and traditional and social media campaigns have further spread the word.

Ten years on, more than 20,000 Australians will go online every Monday in winter to tell us whether they have flu symptoms or not.

When we started Flutracking in 2006, my team and I had a good understanding of how it might help our scientific research. What we didn’t know is what would motivate someone to take part in it.

Why would people want to log on every week to tell us they’re feeling mostly OK? (keep reading to find out)

We make it easy to take part, which helps. It takes less than 15 seconds on average to complete the survey. We email the survey link to Flutrackers in the early hours of Monday morning and we have more than 8,000 responses by 9am and over 15,000 responses by noon.

However, the ease of participation didn’t explain why four in every five Flutrackers complete 90 per cent of the surveys they received from May to October. These people were obviously committed.

It’s not uncommon for Flutrackers to email (or even call us) to let us know that shortly after completing the survey they developed a cough or fever so we can update our database. People even tell us if they’re going on holiday and won’t be answering the survey for a few weeks.

We don’t offer them any financial incentives. There are no special offers for filling out the survey; no chance to win vouchers or prizes. Flutrackers genuinely want to report their flu symptoms (or lack of them) – they’re not logging on to win an iPad.

Intrigued, we asked some of our longest standing Flutrackers why they keep taking part.

Many paused, unable to answer immediately. But in the end they gave us a pretty much universal answer, summarised as “it makes me feel like I’ve done something good for the world on a Monday morning.”

It was that simple. Taking part in crowdsourcing health data makes them feel good.

Clicking the ‘submit’ button seems to release a small burst of endorphins or a similar “feel good” neurotransmitter.

When our Flutrackers complete their survey, they receive a link to the previous week’s flu report and the map of flu activity (to be clear – while I refer to “flu” in this article, we are tracking “influenza-like illness” based on the symptoms reported). They get ‘rewarded’ for their efforts by knowing they’re making a difference.

And they do make a difference. The data they provide helps us track the spread of influenza across Australia every flu season. It tells us how effective this year’s vaccine is, how serious this year’s flu strains are and whether they’re changing.

Flutracking can’t cure flu but it can help develop a better response to it.

Currently, much like a mobile phone network, we have better coverage in some areas than others. We need to get more people logging on in rural areas, to build up a better picture of how flu affects everyone.

Our research has found out a lot about flu in Australia – but it has also shown that being part of something big and participating can make you feel good.

Want to sign up? Or you can share the links below with your friends or workplace to help spread Flutracking.net before the flu arrives.