An update on efforts to reduce Indigenous smoking rates

In his presentation to the 12th National Rural Health Conference in Adelaide yesterday, Dr Calma gave an overview of the program’s work, and rebuffed Federal Opposition criticisms.

At the bottom of the post is a link to a rural and remote health update from the COAG Reform Council.

Working with communities to reduce smoking

Dr Tom Calma urged politicians to listen to people from the community to inform the directions needed to improve Aboriginal and Torres Strait Islander health.

We have to give people the opportunity to understand the issues, and we need partnership and capacity for people to take control of lives, he told the conference.

“If we do that right, we will see sustainable change, particularly in Aboriginal and Torres Strait Islander people. I urge politicians to stay focused, and to listen to people from the community to inform the directions we need to take.”

Dr Calma took issue with Opposition criticism of the $100 million program to tackle Aboriginal smoking, which he leads.

“It is early days in these programs and that’s why I get cranky when I see the Opposition spokesperson talk about the waste of $100 million. He’s not informed. The Opposition needs to understand what the real effects of these programs are – they are having an impact, we talk to people in a way they understand. We show them in practical terms what smoking is doing to them,”

Dr Calma outlined the many ways the tobacco program is helping to reduce tobacco use in Aboriginal and Torres Strait Islander people – around half of Aboriginal people smoke, with rates as high as 70-80% in some communities.’

A 2010 study showed that mass media campaigns don’t work, so the Tackling Indigenous Smoking Initiative is working in many ways in communities, rolling out teams across the nation.

Fifty-seven regions have been identified and will generally receive one regional tobacco coordinator, three Tobacco Action Workers and two healthy lifestyle workers. These teams work on the ground in communities, developing local programs that suit their communities and are available for one-on-one support.

In other initiatives, the Tackling Indigenous Smoking Program is:

Enhancing the Quitline, so it can provide accessible and appropriate services to Aboriginal and Torres Strait Islander peoples.

Enhancements include cultural sensitivity/ awareness training for staff, and nine Indigenous staff have been employed.

“A lot of effort has gone into Quitline enhancements to encourage Indigenous people to call the Quitline and we have seen a significant increase in number of Aboriginal and Torres Strait Islander people calling Quitline,” he said.

The Cancer Council SA is delivering the national implementation of the Quitskills Training Program to increase the number of qualified professionals working with Aboriginal and Torres Strait smokers and their communities. Quitskills provides accredited training in three Certificate IV units in smoking cessation.

Work in social marketing and communication

Teams with vehicles head out in communities to spread the word about healthy lifestyles.

“The whole message is about working with families and telling real stories.

These teams can go out anywhere, erect a marquee, have a community event and inform people. They are all well kitted out in high visibility so people know support is there. I’ve see grown men cry, knowing someone cares.”

Experience and research has shown that Aboriginal people prefer true stories with real people over graphic imagery, and want to hear success stories about quitting. It is also important to use Indigenous peoples, languages, themes, stories and artwork/ imagery in any materials.

In the run up to the election, Dr Calma urged the government and opposition to stay focused on their commitment to the national Closing the Gap agreement (which, as recently reported at Croakey, is due to expire soon).

“They need to stay focused and we need to help them stay focused.  Part of that agreement is about developing a national plan of action, and that is well progressed with government and peak bodies.

“We now have a very strong health leadership forum. Aboriginal and Torres Strait Islander people are at the helm of advising governments and parties and that is what is needed.” 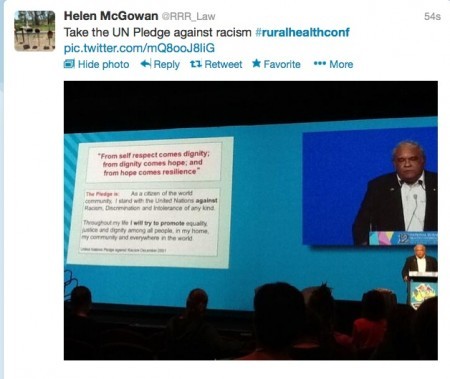 (Thanks to Gerry Considine and Helen McGowan for the photos of Tom Calma).

Update from the COAG Reform Council

How can the COAG Reform Council’s reports be used by advocates for rural and remote health? Councillor Sue Middleton gave some suggestions in her speech, which can be read in full here.

The Council is next month due to release its fourth annual performance report under COAG’s national healthcare agreement, with a supplementary report on health outcomes in rural and remote areas.

Amongst other things, it will look  at some of the interplay between socioeconomic disadvantage and rural location for indicators like smoking rates and obesity, Ms Middleton said.

No doubt many will be hoping for improvements on the existing indicators for rural and remote health, which Ms Middleton summarised as per below:

and 75% higher in very remote areas — where more than 5 in every hundred people are hospitalised for a potentially preventable reason every year.

“To date, COAG has not yet fulfilled its aspiration to provide all Australians with timely access to quality health services based on need, nor on their capacity to pay or where they live,” Ms Middleton said.