An update on Medicare Locals and primary health care reform

Victorians now know where their first four Medicare Locals will be located (although I haven’t yet tracked down any details on what they have promised to do, as was outlined for the first 15 earlier this month).

The Government has now also announced the final boundaries for an Australia-wide network of 62 Medicare Locals (more maps, covering states and cities are available here).

In updating these boundaries, the Government says it took into account a number of factors including the views of state governments, how Medicare Locals would align with Local Hospital Networks, local population numbers, existing local health services and patient referral patterns.

(Click on the image below for an enlarged version) 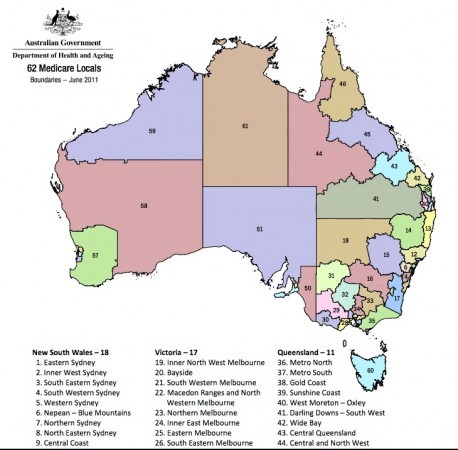 Meanwhile this biting critique of primary health care reform is worth a read although I’m not sure of the author’s identity (any help readers can provide with this would be appreciated.) Here are some snippets.

A combination of politics, bureaucratic micro management and self interest are conspiring to corrupt the vision contained in the National Primary Health Care Strategy of a true population based approach to health, where differences between and within Australia’s regions are recognized and equity issues see the funding going to the areas of greatest need.

… As the Government pushes for signups by the reformed Networks of Primary Health Care Organisations, formerly the Divisions of General Practice, many of the nineteen successful in the first tranche are beginning to wonder about the complicity of the Governments own bureaucrats in this corruption of the vision.

The vision was for less micromanagement by Canberra and the States, greater flexibility through block funding arrangements, local community led primary health care organisations that understood the needs of their constituency, determined the best method of delivering services and went about their business.

The notion of Canberra’s  ‘one size fits all’ approach where the funding arrangements gave much the same money and proposed the same model of care to deliver a mental health service to a middle class white patient in Penrith as it did to an Ngaanyatjarra Aboriginal patient from the Central Desert was meant to be dead in the water.  Regional differences such as morbidity and mortality rates, access to resources, the cost of those resources, cultural differences, the need for outreach services, housing, education, employment – the social determinants of health – were to be the new approach.

The reality is vastly different.  The Deed of Agreement drafted by Canberra to govern the new Medicare Locals is a controlling document underneath which the Government will roll out a myriad of programs each with their own set of performance, evaluation and reporting requirements.  The future of the Department of Health and Ageing’s Primary Health Care Division is assured.

The decision to brand these new organisations ‘Medicare Locals’ is seen by most in the primary health care sector as ludicrous, likely to cause major confusion in the community, and see queues of people outside the door with their Medicare claim forms in hand awaiting their refunds.  The more sinister element in the branding is in their similarity to a Franchise.

The brand is to be protected by Government with a very rigorous set of policies and procedures governing how these organisations are to behave.  In effect those forerunner Medicare Locals which were formerly autonomous of Government, as most were independent locally managed organisations, will be nationalized, becoming regional offices of the Department of Health and Ageing.

Their former independence of Government, able to lobby vigorously of behalf of their constituency, influence health policy and help drive continuing health reform will be neutered and potentially replaced by a new set of overly regulated, unresponsive, frustrated minions of the Government in Canberra, albeit with an office in your town.

The Eastern Ranges GP Association has developed a fact sheet to help explain Medicare Locals (a link to it is here).