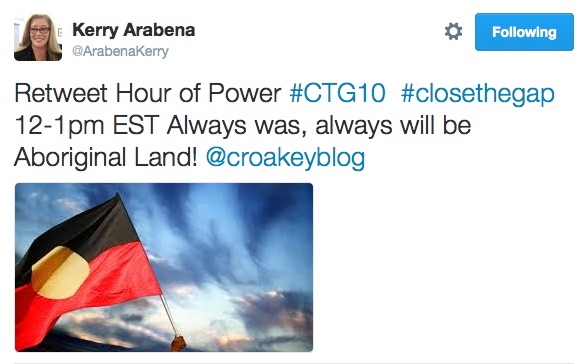 And here are some other gaps worth discussing, on the 10th anniversary of the community-driven Close the Gap campaign

As previously mentioned, to help mark the 10th anniversary of the community-driven Close the Gap campaign, Croakey readers are invited to participate in an “hour of power” Twit-a-Thon from 12 noon-1pm AEDT on Thursday 17 March, using #CTG10. (You may also wish to use #closethegap as well).

The anniversary is an opportunity for all of us to reflect upon our roles in addressing the ongoing impacts of colonisation, including racism and unfair, unsafe practices, systems and structures.

The article below highlights some of the “gaps” that merit greater discussion and attention – gaps in political representation, in caring for country, in providing a healthy start to life, in imagination, and in respect. The article is a joint effort, by Summer May Finlay, Clyde Rigney Jnr, Kerry Arabena, Tim Senior and Melissa Sweet.

While some things have gotten better, there are clearly significant gaps that affect the lives of Aboriginal and Torres Strait Islander peoples. There almost isn’t an area where there isn’t a gap: incarceration, education, income, home ownership and health. If Australia is serious about closing the gap between Aboriginal and Torres Strait Islander people and other Australians, we need more representation at all political levels. Not just committees or advisory groups. 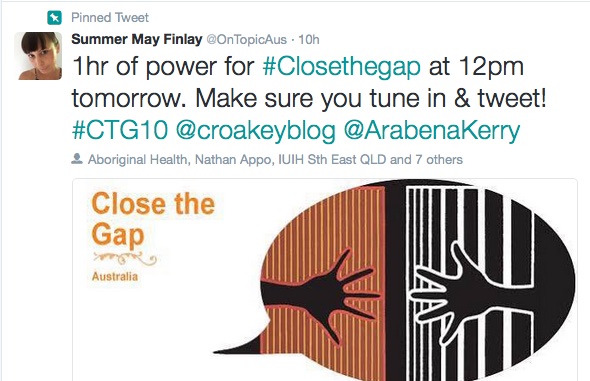 One of the things that Aboriginal people hold central to Culture is Country. Culture is also one of the key aspects of our health. Health is intimately linked to Country. Since colonisation, access to Country (which includes land and waters) has often been denied Aboriginal people. Land and waters became the domain of the coloniser and their management was, and continues to be, significantly different from that of the Traditional Owners. This is because the colonisers’ view of land management is significantly different to that of Traditional Owners. The coloniser looks at our lands and waters with a focus of productivity. Traditional owners look at managing our lands and waters to ensure that there is reproduction; if our lands and waters do not reproduce they are dying. 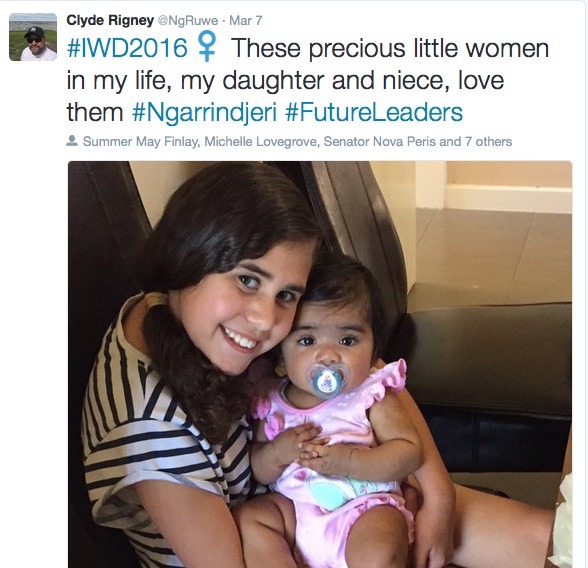 Addressing gaps in the First 1000 Days
By Kerry Arabena

There is growing focus on the importance of integrated services and family engagement during the first 1,000 days for Aboriginal and Torres Strait Islander children. But more is needed. To close the gaps for our children, we need much better linkages between service systems, crossing jurisdictional and departmental boundaries, including justice, health and education. We need coordinated interventions that properly engage parents and vulnerable children with interrelated issues — such as maternal mental health, parental incarceration, racism and familial stress — and that also engage with the child protection and welfare systems.

We can support the inherent strengths and resilience in communities by bringing together disparate programs — home nursing, child protection and fathering support — with evidence-based very early learning programs. This will allow a coordinated effort in responding to the full impact of social determinants, improve access to comprehensive services and link those in need with local, Indigenous-led services.

Determined, effective action during the first 1,000 days can catalyse equity across a person’s lifetime. Closing the gaps that are currently stopping children from having the best start to life can bring lifelong benefits.

“Health is dependent on conditions that enable people to live lives they would choose to live” Michael Marmot, 2011

“The rich grind the poor into abjectness, and then complain that they are abject.” Percy Bysshe Shelley, 1812.

When faced with constant stories of abuse and suicide, poor health outcomes and imprisonment, it’s hard to see how much that limits our imagination to potential solutions. So subversive is this “Crisis!” rhetoric, that the solutions must be huge and dramatic.

It’s called “the deficit model” where we only talk about all the things that are wrong. Eventually, without even blinking, we’re starting to talk as if the problem we need to correct is “being Aboriginal.”

When that happens, you start to propose solutions like “We need another stolen generation,” or “we need to move people off their homelands,” or “Perhaps we need a bit more paternalism.” Or even launching an intervention, where the human rights legislation gets suspended and the army gets sent in.

These are all ways of saying “We give up. We can’t think of any solutions. If only you were a bit less Aboriginal… a bit more like us.”

But the problem is not “Being Aboriginal.” In fact, the solution is “Being Aboriginal.” The health outcomes, the suicides, the disabilities, the imprisonments as well as being problems, are the predictable results of a set of conditions in society. Wherever you dispossess people, exclude them from society, exclude them from economic opportunity, this is what you see, whether it’s Maori in New Zealand, Black African-Americans, or even peasants in 19th Century England.

We know what works. It’s giving people and communities control over their own lives, with the support to make it work. The evidence is quite clear, and it’s all around us. So, Aboriginal and Torres Strait Islander people who retain a connection to their culture and country are healthier. Community Controlled health services get results every bit as good as mainstream health services in a population we tell ourselves is hard to reach. In NSW, Brighter Futures is a program that supports families to cope, so that removal of children is avoided. We need to talk about these solutions again and again, and hear from local communities that developed them – the successful ones always come from local communities!

What a lack of imagination prevents us from seeing, perhaps, is the true nature of the gap – that perhaps it’s non-Indigenous people who are behind, who are lacking.

If you look worldwide at the evidence on effective primary health care, you’ll see that Community Controlled Health Services are the Australian enactment of that model. That’s not to say that there aren’t excellent GP services that provide excellent primary care too – there certainly are. The way they are set up, embedded in local communities, holistic, person centred (and not disease focussed) takes them closer to the ACCHO model. Struggling with getting economic growth or employment? Well, ACCHO services deliver those for you too, without recourse to mining or Twiggy. A connection to place for all of us leads to attempts to protect our homes locally, as we see in the Lock The Gate alliance, or even internationally, made famous by Naomi Klein as Blockadia.

If we’re not imaginative enough, we see ourselves as separate from our environment, not part of it, where life is just “ecosystem services” for us, and our air, water and earth is dumping ground for our waste. I think it’s non-Indigenous Australia who are really playing catch-up. 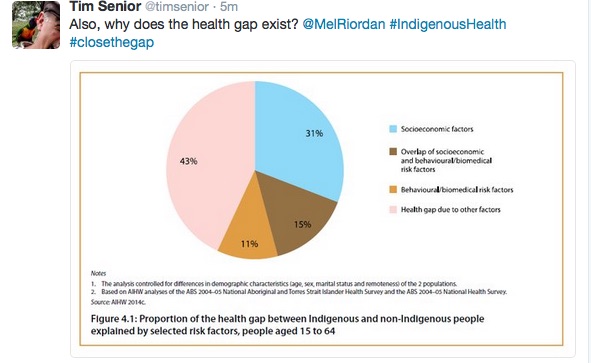 Gaps in respect
By Melissa Sweet

When I was at school back in the 1960s and 1970s, we did not learn about the true history of this country, and neither did I learn this when at university in the early 1980s. Hopefully education systems have changed since then, but it’s likely that many, if not most, non-Indigenous Australians have a limited understanding of the sophisticated, knowledge-based cultures and the peoples who cared for this country over tens of thousands of years (although there are plenty of opportunities for filling these gaps, including through books such as Dark Emu, The Biggest Estate and Treading Lightly: The Hidden Wisdom of the World’s Oldest People).

Similarly, it seems that every day in our public debate and media it is too easy to find evidence of a lack of understanding about the ongoing nature of colonisation and its continuing impacts. Too often these gaps in knowledge and understanding translate into a lack of respect for Aboriginal and Torres Strait Islander peoples, their knowledges, cultures and their country.

Filling these gaps in the understanding of non-Indigenous Australians can be expected to bring wide-ranging benefits, for Aboriginal and Torres Strait Islander peoples’ health and wellbeing, as well as for the wider community. As Dr Gregory Phillips wrote in his PhD, Dancing with power: Aboriginal health, cultural safety and medical education: “Aboriginal medicine has more to teach white Australians about wellness, health care, teaching and learning styles and equality than a western medical faculty might often be ready for.”

Likewise, Professor Kerry Arabena argues in her recent book, Becoming Indigenous to the Universe: reflections on living systems, indigeneity and citizenship that Indigenous knowledges and worldviews offer great opportunities for all peoples at a time of planetary crisis. She describes a “state of well-being that results from people living in balance with and taking responsibility for finite biological and physical ecosystems, and seeking to attain health and well-being in the context of healthy ecosystems.”

Summer May Finlay is a Yorta Yorta woman, a member of the Croakey connective and #JustJustice and #IHMayDay projects, a health policy consultant and a PhD candidate.

Clyde Rigney Jr is a proud Ngarrindjeri man from the Ngarrindjeri Nation along the River Murray, Lower Lakes and Coorong. Born in Murray Bridge, he spent most of his life living on Ngarrindjeri Ruwe (land) between Murray Bridge, Narrung and Meningie. For the last 20 years Clyde has worked in Aboriginal Affairs in a variety of capacities including youth work, economic development, training and employment, Aboriginal and Torres Strait Islander health, regional development, natural resource management, governance and government engagement. Clyde is currently the CEO of Moorundi AACHS and a Board Member of the Aboriginal Lands Trust in South Australia. In recent times Clyde has also been a board member of the Ngarrindjeri Regional Authority, a member of the South Australian Aboriginal Advisory Council and CEO of the Ngarrindjeri Regional Authority.

Professor Kerry Arabena is Chair for Indigenous Health and Director of the Onemda VicHealth Koori Health Unit, and colleagues in the Indigenous Health Equity Unit in The University of Melbourne’s School for Population and Global Health are driving First 1000 Days work in Victoria and Australia more widely.

Dr Tim Senior is a GP who works in Aboriginal health in NSW, a member of the Croakey connective, and the author of Wonky Health, a e-book about health in all policies (available here). He is also involved in medical education.

Melissa Sweet is a public health journalist, the founder of Croakey and a PhD candidate at Canberra University.

Please join the “Hour of Power” #CTG10 conversation on Twitter

But if you want to tweet the “Hour of Power” at your own convenience, please go right ahead!