ANROWS2016: how can research drive policy, practice to address violence against women & children?

Journalist and researcher Annie Blatchford will report on the proceedings for the Croakey Conference News Service. She previews some of the discussions below, in a Q and A with ANROWS CEO Heather Nancarrow.

Nancarrow says a big focus will be on the need for better sharing of information between sectors – long recommended as vital to keeping women and children safe but still not achieved, including between health, police, corrections and victim supports services.

Another focus will be on the issues facing vulnerable groups of women, particularly those with disability, Aboriginal and Torres Strait Islander women, and women from culturally and linguistically diverse (CALD) backgrounds, to make sure they don’t fall through the cracks of mainstream responses, including in national data collections. 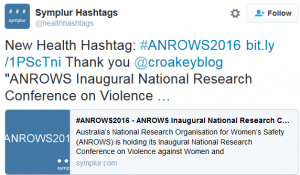 Follow the conference on Twitter via the hashtag #ANROWS2016, and via @annieblatch and @wepublichealth, where @JessKBGregory – ANROWS Communications and Media Officer – is at the helm.

Q. We have seen an unprecedented focus in the past year or two on the need to address violence against women and children in Australia: where does the ANROWS conference fit in that context?

Heather Nancarrow: Rosie Batty has been an incredible catalyst for community mobilisation, hence we have seen an unprecedented media and civil society focus on this issue. We are very pleased that Rosie will be the speaker at the Conference Dinner on Wednesday.

ANROWS was conceptualised by the National Council to Reduce Violence against Women and their Children, which produced Time for Action (2009), the blueprint for the Council of Australian Governments (COAG) 12-year National Plan to Reduce Violence against Women and their Children 2010-2022. The Plan sets out to achieve six national outcomes and ANROWS’s role is to produce, disseminate and facilitate the uptake of evidence to support their achievement. The outcomes include “communities are safe and free from violence” and “relationships are respectful”, both of which require broad-based community engagement, and systemic and cultural change.

The ANROWS conference will present findings from new research, across strategic research themes linked to the National Plan, and encourage discussions by policy-makers, practitioners and decision-makers of the evidence and its implications for their work on addressing violence against women and their children.

Q. You will be addressing the conference on translating knowledge into policy and practice: what do you mean by that and can you give some examples of what’s needed and how?

Heather Nancarrow: We know that influencing the take-up of new evidence – changing the way things are currently done – involves much more than disseminating information from research through publication in journals and on websites, for example. Research findings need to be synthesised, distilled and funnelled into action by tailoring communication strategies for relevant audiences. This is an iterative process and takes place in a complex system of interactions between researchers and knowledge users.

Violence against women is a complex field because of the nature of the violence and its multiple impacts on individual victims, their children, families and communities. Its effects relate to policy and practice in the areas of physical and mental health, housing and homelessness, income security, and civil and criminal law. It also cuts across Commonwealth and state and territory jurisdictions.

Information sharing across government and non-government agencies has long been shown in research as critically important to timely and effective responses for women affected by violence, but it has not yet been achieved.

Consecutive inquiries continue to advocate for information sharing, for example, between the federal Family Court and state/territory based child protection and domestic violence service systems. Information sharing between health (particularly mental health), police, corrections and victim supports services also remains a barrier to timely and effective response in many areas of Australia. Implementation of common risk assessment is another area where evidence exists but its uptake is varied.

Further, and bearing in mind that violence against women cuts across all socio-economic, cultural and geographic groups (though some are at greater risk than others), there is insufficient quality evidence in some areas to inform policy and practice.

The Second Action Plan of the National Plan identifies the need to prioritise women with disability, women from culturally and linguistically diverse backgrounds and Aboriginal and Torres Strait Islander women. ANROWS has been commissioned by the Commonwealth Government to analyse existing national data collections relevant to violence against women, identify gaps related to these three groups and make recommendations on improving data collection in future to support future analysis of diverse needs.

ANROWS is also embarking soon on a program of research specifically directed at finding out what governments and practitioners should be doing to best deploy responses to perpetrators of violence against women across Australia.

Heather Nancarrow: The conference will feature presentations on all 20 projects from ANROWS’ Research Program 2014-2016, including a presentation and discussion on Change the story: A shared framework for the prevention of violence, the result of a collaboration between Our Watch, ANROWS and VicHealth. There will also be presentations on research that is not funded by ANROWS but is consistent with our National Research Agenda to Reduce Violence against Women and their Children. This includes the results of research on innovative responses to violence against Indigenous women; women’s input into trauma-informed care; and developing informed and effective responses to violence and abuse against women with disabilities.

We’re also looking forward to the three plenary panel discussions, which focus more on knowledge translation and exchange than research findings. Every presentation, however, is followed by a facilitated discussion to encourage the uptake of evidence in policy and practice.

Q. What areas of policy and action need to be prioritised to eliminate violence against women and their children in the future?

Q. The conference is not ‘just’ about violence against women – can you describe the breadth of issues and topics that will be discussed and why they are important? How critical is intersectionality to addressing violence, and what are the challenges/barriers?

Violence against women is a capacious concept. It includes domestic, family and sexual violence – so violence perpetrated against women by their current or former intimate partners or other family members, and sexual violence that may be perpetrated by men who may or may not be known to the victim. It involves diverse groups of women, as victims in varying contexts, and men who perpetrate violence who also come from diverse social, cultural and geographic backgrounds. And it involves the effects of violence on children. Understanding and responding to the intersections of various factors in the lives of victims, and perpetrators, is critical to success – this is often expressed as “one-size does not fit all”. What it implies is client-centred responses, whereby the various issues affecting the desired outcome for individuals are addressed. For example, an intervention order in a context where there is extreme social disadvantage and/or substance addiction is unlikely to be effective if the other issues aren’t addressed along with the violence, even acknowledging that they are contributors rather than causes of violence.

Q. What are three things you hope will be achieved from the conference?