Antiretroviral therapies not the “silver bullet” for Indigenous peoples with HIV, AIDS

The use of antiretroviral therapies for prevention as well as treatment for HIV and AIDS should not be seen as a “silver bullet” and could actually widen the gap in health outcomes for Indigenous peoples, an international Indigenous conference has been told.

Canadian First Nations health leader Dr Alexandra King said the benefits of antiretroviral therapies (ART) were many and convincing, but they would not address many of the cause issues for Indigenous people with HIV and were also raising a number of ethical issues.

“My concern is this is a biomedical solution, it’s a pill, when we know there are all these determinants of health for Indigenous people that are in addition to what non-Indigenous people are facing,” she said. (see slide below).

King is a Vancouver-based physician and member of the Nipissing First Nation of Canada (who she noted were observed by a Jesuit scholar as coming “as near as possible to Rousseau’s perfect and ‘ideal man’”). She serves on the Canadian National Aboriginal Working Group on HIV & AIDS.

She delivered a “primer” keynote address – ‘Unpacking treatment as prevention (TasP) and its implications’ – at the 2014 International Indigenous Pre-Conference on HIV and AIDS, held in the lead up to AIDS 2014, the 20th annual International AIDS Society conference which opens in Melbourne today.

See below too for an article she has co-authored with fellow Indigenous health researchers, Australia’s Associate Professor James Ward and fellow Canadian First Nations person Earl Nowgesic on issues around the take-up of HIV treatment by Indigenous people, including deficiencies in diagnosis and in treatment initiation and adherence in both Canada and Australia. They call for Indigenous led, derived and driven solutions and Indigenous-specific data collection in both countries to build a better picture of risks.

As this article about prevention as treatment (PasT) outlines, a combination of potent antiretroviral therapy (ART) has “changed the course of the HIV epidemic”, not only significantly improving life expectancy (to decades rather than months) but also dramatically reducing the risk, by almost 100 per cent in one landmark trial, of transmitting the infection to sexual and drug-using partners.

As a concept and a strategy, treating HIV-infected persons to improve their health and to reduce the risk of onward transmission—sometimes called treatment as prevention— refers to the personal and public health benefits of using ART to continuously suppress HIV viral load in the blood and genital fluids, which decreases the risk of transmitting the virus to others.

In her address, King said ART was “life-saving and can be life giving”. It was, she said, “absolutely necessary (to the prevention and treatment of HIV and AIDS) but it is not sufficient by itself.” 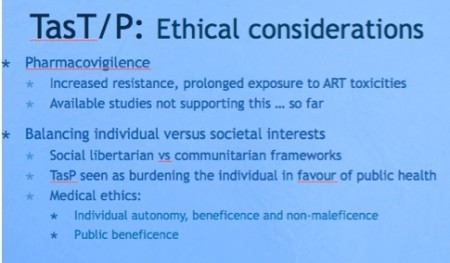 An important practical issue for Indigenous communities across nations is that many people do not seek diagnosis, much less treatment, because they fear the stigma, discrimination and lateral violence that they and their families could face.

“My concern is that we (Canadian First Nation people) are being diagnosed late, we are entering treatment late, so we’re already not being served by the existing medical system, and this comparable across countries,” King said. “If in fact the Treatment as Prevention ends up getting more (non Indigenous) people into this early ART and we as Indigenous people continue to be left out, then you’re going to have this widening gap,” she said.

“If (international health authorities) are saying they want a goal of 70 or 80 or 90 per cent of people not only on ART but virally suppressed, are we then therefore going to be over-represented in the 10 or 20 or 30 per cent who are not? That’s my concern: because there are other questions to deal with around HIV and ART for Indigenous people, if the focus is only on a biomedical response, we’re going to end up with a widened gap.”

See also this slide from Associate Professor James Ward’s presentation to the conference about the cultural determinants of health for Indigenous people. 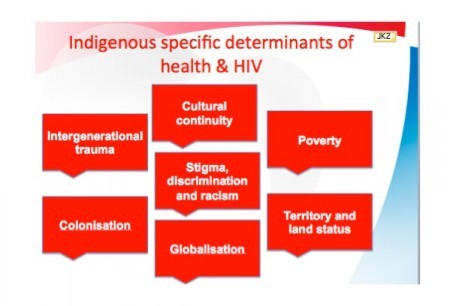 A tale of two nations: First Peoples’ experiences with HIV and the need for more appropriate data in Australia and Canada

In the high-income countries of Canada and Australia, First Peoples face serious challenges to health and wellness.

The two countries are similar, not only in geographic size, systems of government, health service provision and economic wealth, but also in their colonised histories and in the detrimental legacies of past policies as they relate to First Peoples. These issues are paramount when addressing HIV vulnerability in both populations.

Comparing First Peoples’ health status in our two countries is a useful exercise.  It can help us to understand context, relativity and gaps, and to share lessons learned with others.

Based upon available data, what is common between Canada and Australia is that the epidemiological profile of HIV among First Peoples is different from that of non-indigenous Australians and Canadians. This amounts to higher diagnosis rates of HIV reported at a younger age, among heterosexuals, among women, and among people who inject drugs.

These combined factors create a powerful base for HIV to escalate rapidly within communities, which are often marginalized and have reported less access to health services. Further, in both countries, the proportion of cases of newly diagnosed HIV categorized as either late diagnoses or advanced HIV is greater for First Peoples than for non-Indigenous peoples.

Early diagnosis and initiation of and adherence to antiretroviral therapy (ART) have been demonstrated to reduce the risk of HIV transmission. Additionally, there is growing evidence of reduced morbidity and mortality achieved through early initiation of ART.

Delayed diagnosis rates for Indigenous peoples could be indicative of a future rapid increase in HIV within First Peoples’ communities. Delayed treatment initiation and adherence to ART could herald even worsening gaps (e.g., emergence of HIV drug resistant strains) between Indigenous people and their respective non-indigenous counterparts, in both Australia and Canada.

For both Australia and Canada, we do not have enough in-depth understanding of the circumstances surrounding the experiences of First Peoples living with HIV. This issue is important for two reasons.

First, it is important to understand what happens to First Peoples when they are diagnosed with HIV and what an HIV diagnosis means to them, especially in terms of their health care needs and experiences with ART and how such healthcare fits within the holistic perspectives on health that are often taken by First Peoples.

Second, it is important to understand the implications of scaling up carefully tailored ART in both countries among key populations as a means of reducing new HIV cases in what is commonly described as the treatment as prevention agenda.

The potential for people to “fall off” the HIV treatment cascade at multiple points has gained much attention globally (See Figure). The tool is used in international, national and local contexts and can be used to highlight challenges and prioritise interventions at specific points on the cascade.

Some of the challenges highlighted by the HIV treatment cascade are worthy of critical investigation and include: How many people living with HIV are getting tested and diagnosed? Of these, how many are linked to care and are retained in care? How long does it take to have viral load, CD4 and HIV drug resistance testing after being diagnosed with HIV? How many people receive ART, adhere to their treatment and achieve viral load suppression? How do people respond to ART in terms of their immune function, ART tolerability and resistance?

Reducing drop-off across the continuum is important: at the individual level, it can increase a person’s longevity and health outcomes by lowering the viral load in the body; at the community level, it can decrease the risk of transmission of the virus. Ultimately, solutions need to be driven by First Peoples, involve First Peoples living with HIV in a meaningful way, and be more relevant to First Peoples in order to ensure more holistic approaches to addressing critical health determinants.

The First Peoples of Canada and Australia have much in common – country-level similarities; comparable epidemiological characteristics and cultural diversity, both internally and vis-à-vis their respective non-indigenous populations; colonial histories; and significant challenges to not only close the health gap, but achieve wellness.

The burden of HIV weighs heavily on Indigenous communities in both countries where there are deficiencies in diagnosis and in treatment initiation and adherence. Combined, these suggest that mainstream programs and policies are insufficient; rather, what both countries require are Indigenous led, derived and driven solutions. There is also a need for Indigenous-specific data collection and analysis to better identify and more fully articulate challenges, and speed the process of prioritizing resources and solutions.

• James Ward is Associate Professor at the Aboriginal Health Baker IDI in Alice Springs and from the Pitjantjatjara and Nurrunga clans of central and south Australia.

2. Gardner E.M. et al. The spectrum of engagement in HIV care and its relevance to test-and-treat strategies for prevention of HIV infection. Clinical infectious diseases : an official publication of the Infectious Diseases Society of America. 2011;52(6):793-800.

PrevPreviousAbbott’s Medicare reforms – today’s crime is tomorrow’s co-payment
NextWill there be a Royal Commission into premature deaths caused by the Federal Budget?Next