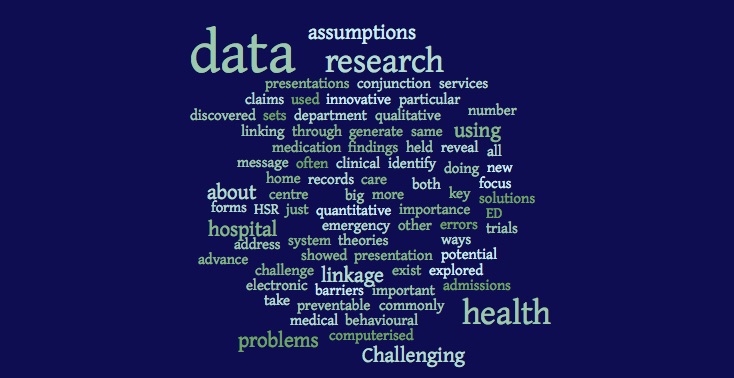 Are we making the best use of data to improve health care?

Whether it’s big or small, linked or discrete, qualitative or quantitative – data is at the centre of all health services research and has been a key theme of the #HSR15 conference in Melbourne this week.

A number of presentations demonstrated new and innovative ways of using data to challenge commonly held assumptions about the health system and to generate solutions to challenging problems.

For example, Professor Gary Freed from the Universities of Michigan and Melbourne, demonstrated how he used hospital emergency department (ED) data to show that by far the greatest number of ED presentations are among children from 0-4 years old – and not (as is often thought) older age groups.

His research focused on understanding the drivers for parents to bring their children to the ED for lower urgency conditions.

Given that one of his findings was that parents believed that their children received better care at the ED than at their GP, Freed recommended exploring the idea of establishing specialist paediatric GP centres to provide children with high quality care for lower urgency conditions.

Professor Margaret Allman-Farinelli from the University of Sydney and her PhD student Stephanie Partridge also used data on changing obesity rates to show that young adults are the age group with the fastest growing rates of obesity, rather than children, as is commonly believed.

In response to this finding, they have developed the Text2BFiT initiative, which uses texting, blogs and social media to promote healthy lifestyles for the ‘Gen Y’ cohort.

Randomised trials of the initiative have resulted in sustained weight loss and lifestyle changes over a 12-month period among the target group, and the developers are now looking to see if these results can be achieved with a broader group of young people.

Professor Libby Roughead from the University of South Australia showed how she used data from computerised health claims and electronic medical records, in conjunction with behavioural theories, to identify and address problems such as medication errors and preventable hospital admissions.

She described how she is working with doctors, pharmacists and veterans to improve medicine use and reduce hospitalisation among the veteran community.

A key take home message from her presentation is that research using ‘big data’ is not just ‘more of the same’, but can reveal important findings about health care that would not be discovered through clinical trials or other forms of research.

Data linkage was the focus of a number of presentations exploring both the potential for linking data sets to advance research and the barriers that often exist to doing so.

Professor Phillip Clarke from the Centre for Health Policy at the University of Melbourne  chaired a ‘standing room only’ session dedicated to data linkage including three presentations on linking administrative health data with other information to improve health service delivery.

Clarke presented some case studies of the use of linked administrative health data to provide insights into the delivery of health care and described data linkage as a ‘powerful tool’ for understanding aspects of the Australian health system.

The case studies covered the use of linked data to estimate disease specific costs for people with diabetes, to understand associations between war-related service and war-related disability among veterans and to measure inequalities in access to care in people attending GP services.

He said that research using linked data was particularly important in developing policies and programs targeting people with chronic conditions and that there was significant scope within the Australian research environment to expand the availability and use of linked data to maximise health system performance.

Differences between the States

In her presentation at the data linkage session, Dr Kim Dalziel, also from the Centre for Health Policy at the University of Melbourne, reported the findings of a systematic review of publications involving linked hospital data in Australia.

She and her colleagues searched all journal articles available for the 15 years to December 2014 using individual patient-level data linked with hospital records. Specifically, they analysed these studies according to publication year, state(s) involved, type of data linkage, disease area and study purpose.

This review found that there has been significant growth in the publication of research involving hospital data linkage over the past 15 years. Fifty-one percent of these came from WA and 33 percent from NSW, representing an uneven pattern across the country, due primarily to access issues for researchers.

The review also revealed that over half of the studies identified (56 percent) involved linkage to state data bases and that only eight percent was linking health data to non-hospital databases.

Dalziel argued that her research demonstrates the unrealised potential for data linkage in states outside of WA and NSW, which could be used to improve health services.

She also demonstrated how the availability of linked data has resulted in increased research activity, leading to a growing ‘research gap’ between those jurisdictions which enable data linkage and those that don’t.

She concluded that this shows that there are underutilised opportunities for data linkage to add value in health services research and that the barriers to accessing linked datasets impedes efficient resource use and the potential gains in knowledge through accessing the wealth of useful data routinely collected in Australia’s hospital system.

(For more reading on data linkage, check this 2013 Croakey article).

This view was strongly supported by participants at the session who shared the difficulties they had experienced in accessing data, to the point that one participant described it as a ‘counselling session’ for disillusioned researchers.

Dalziel reported that the average waiting time for researchers to access the data they need is 18 months to two years in Australia. Some participants added that around half their research grant period was spent in attempting to gain ethics approval and access to data, leaving only half the time to do the actual research.

Other research reported at the session included a project led by Alison Hayes from the University of Sydney. This involved using linked data to analyse the healthcare costs of a cohort of children over the first five years of their life, which highlighted the cost-effectiveness of primary health care for this age group.

Another study by Gareth Goodier from Melbourne Health examined barriers to the effective use of linked hospital data within his organisation.

He found that there were particular difficulties in accessing cross-jurisdiction data, which creates inefficiencies between services and may adversely affect patient experience.

He recommended the development of a framework to enable the linking of data across the care continuum and investing in data linking infrastructure to fully utilise this resource.

The under-use of data

The under-use of existing data was also a theme of a number of presentations, with researchers highlighting examples of where data was being collected but not used to change existing health care practices.

Patient advocate Jen Morris presented data on consumer complaints about doctors to state health care complaints bodies, showing that 50 percent of the complaints relate to three percent of registered medical practitioners. However, this information has not been used to address the issues involved in the provision of care by the doctors involved.

Morris’s presentation also highlighted the range of data that needs to be considered in health services research, in particular the importance of consumer-generated data.

She described consumers as the ‘most under-utilised resource in the health system’, and argued that by asking questions, reporting problems and reflecting on health system performance consumers can play an important role in driving improvements in health care.

She argued strongly that the health system needs ‘constructive criticism’ and that consumers need to be supported to provide the ‘frank and fearless’ feedback to health services required to improve future delivery of care.

The complexity of obtaining data that reflects the experience of Aboriginal and Torres Strait Islanders in the health system was explored in a presentation by Janet Kelly from Flinders University.

She described developing a set of patient journey mapping tools that could be used to identify the barriers and enablers to equitable and responsive care for Aboriginal people.

She said that while health care is delivered in discrete and specialised segments, it mostly succeeds or fails as a package. She argued that tracking patients’ experiences or journeys though the system is an effective way to evaluate how and why the package as a whole works (or doesn’t).

Key features of patient journey maps are that they involve multiple perspectives, including those of the consumer, their family and carers, the community and health care providers.

This enables a richer and more relational picture of health service delivery to be developed which reflects the experience of Aboriginal people and can be used to improve coordination, communication, collaboration and cultural safety of health care.

Given the wide range of data being used in health services research and the increasing trend for collecting data sets across all areas of the health system, the advice from Professor Gary Freed that researchers need to become ‘data literate’ as well as ‘health literate’ is particularly salient.

From the presentations at #HSR15 it is clear that a ‘data literate’ health research workforce is the key to unlocking the potential that exists within our health databases in order to improve the future delivery of health care.

Below are some of the tweets relating to the presentations mentioned above. 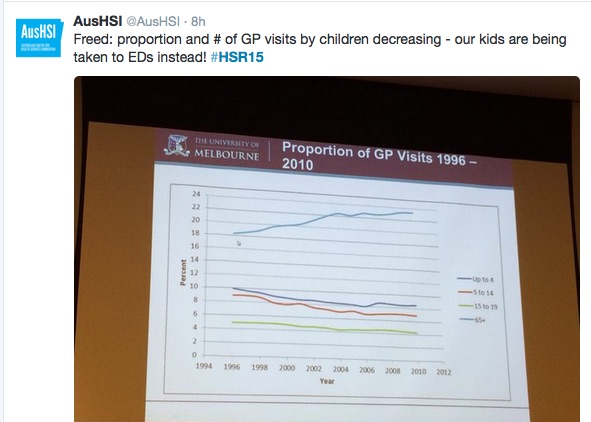 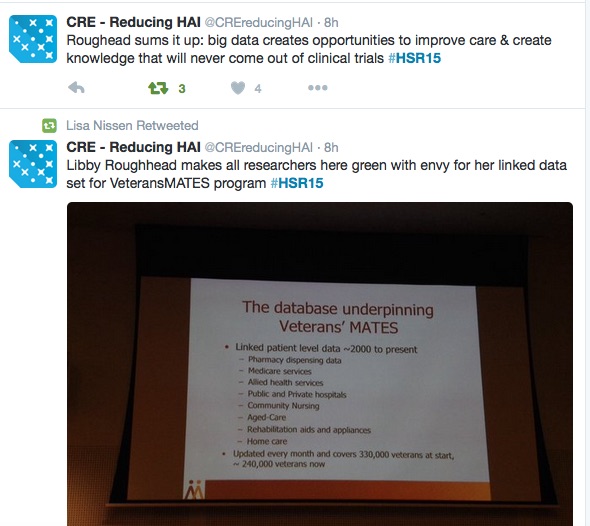 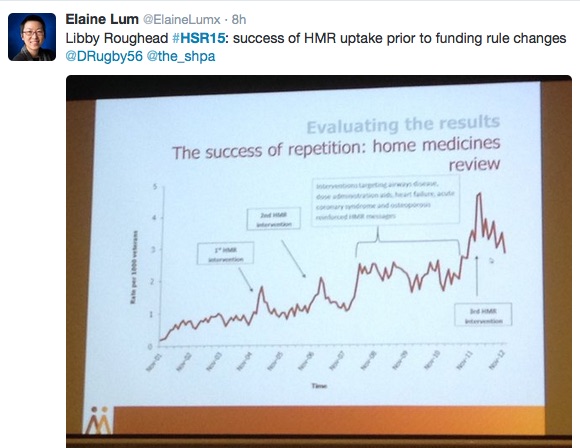 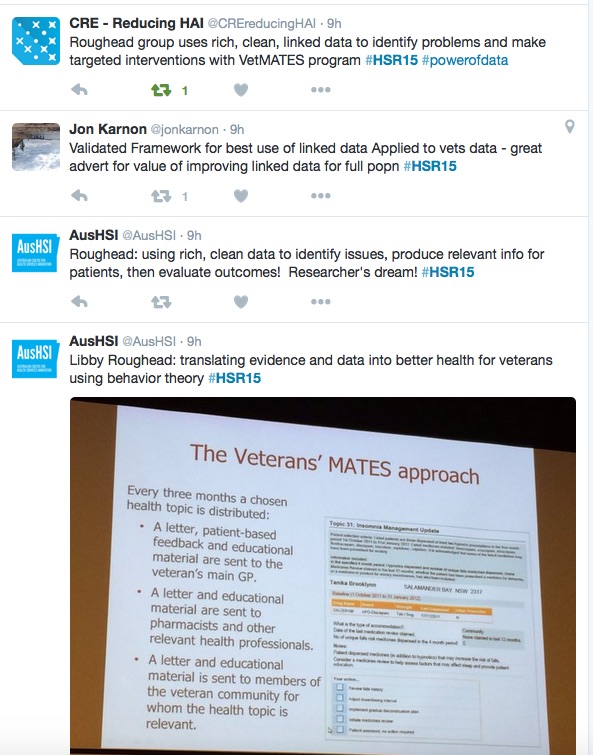 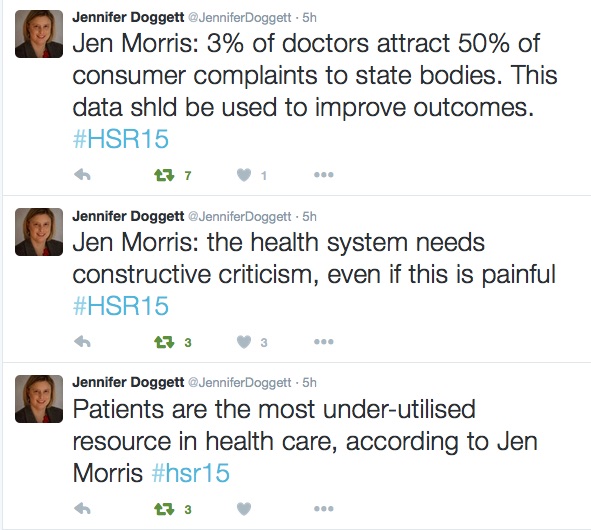 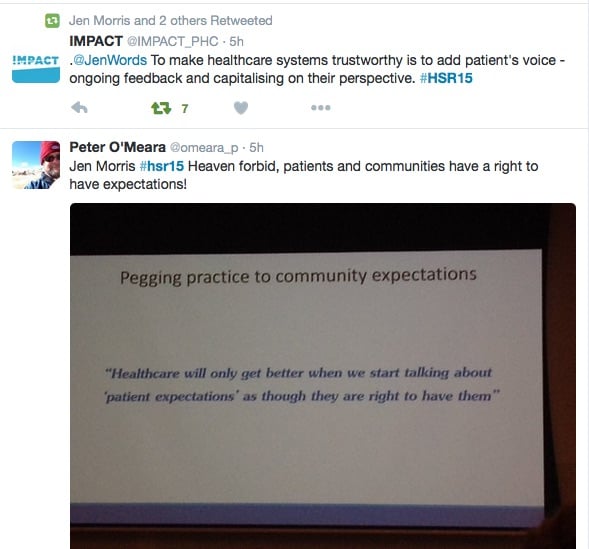 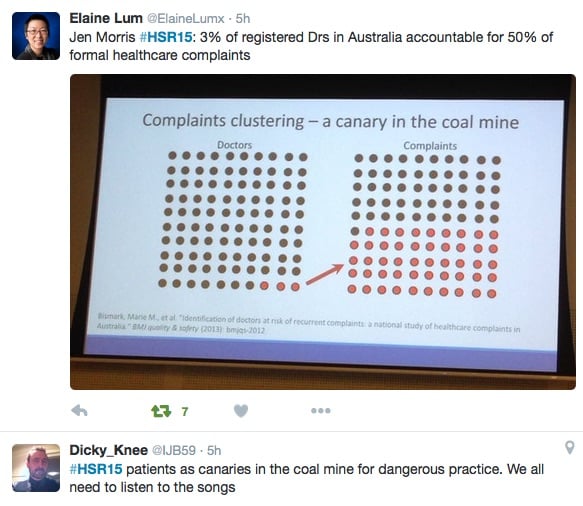 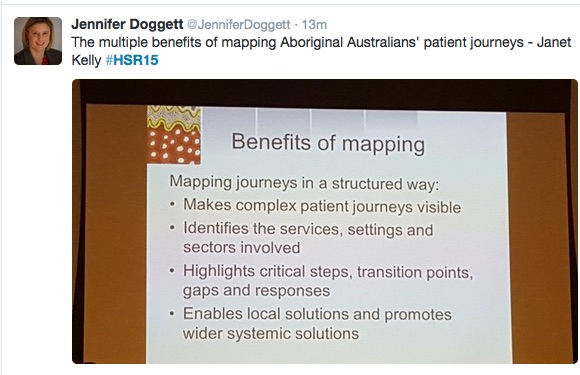