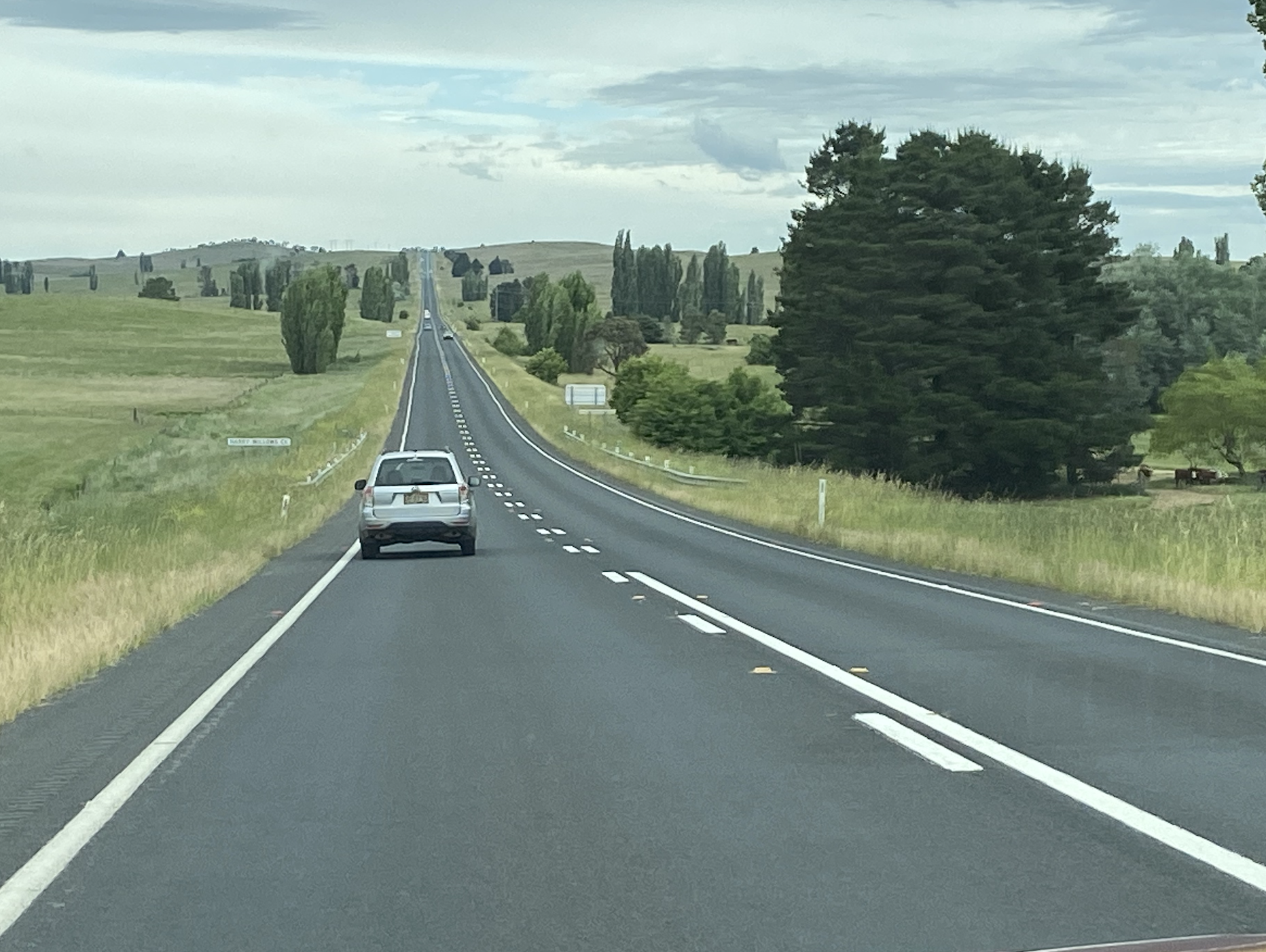 The most radical changes to primary healthcare since the introduction of Medicare were proposed this week in a report by the Grattan Institute. It argues that Australia’s system of general practice is inadequate to meet the community’s growing need for chronic disease prevention and management and is out of step with international approaches in this area.

Croakey editor Jennifer Doggett talked to Peter Breadon, Health and Aged Care Program Director at the Grattan Institute and one of the report’s co-authors, about the proposed reforms and their likely chance of success, given the multiple failed attempts at change over past decades.

Australian general practice is in trouble…….many GPs believe that the financial system promotes the practice of bad medicine and that those who try to do the job properly are finding it increasingly difficult to make ends meet.

This week the Grattan Institute released ‘A new Medicare, Strengthening general practice’, which argues for major changes to the funding and delivery of general practice in Australia to meet the community’s changing needs for care, in particular in relation to chronic disease prevention and management.

The above quote could quite easily have appeared in this report but is actually taken from an account of a GP financing think tank (“What are you going to do about general practice in Australia?) hosted by the National Centre for Epidemiology and Population Health in 1991.

Looking at that quote and the Grattan Report side by side, it’s easy to feel like not much progress has been made in general practice policy in the three decades between them.

Successive governments have tried, at various times and in various ways, to improve the delivery of chronic disease prevention and management in general practice.

But none of these attempts over the past 30 years have resulted in the major structural changes that health groups, experts and consumers consistently argue is needed within our primary health care sector.

So why should this new proposal from Grattan be any different?

Peter Breadon, Health and Aged Care Program Director at the Grattan Institute, says there are signs that the time for general practice reform may finally have come.

“Pressures that have been building up for a long time are seeing the system reaching a breaking point. There is a shared belief among many of the players that change is needed. Another factor is that governments are starting to make decisions about shifting care outside of the GP clinic, for example the pharmacist prescribing trials in in NSW, SA and Queensland. This may also make GPs more open to reform.”

Breadon acknowledges the report covers similar ground to that addressed in previous reviews and inquiries but says that it adds value through bringing together the different components needed to make general practice reform a reality.

“The report looks at the system as a whole and brings together the elements required for a successful reform process – it’s not enough to have a team-based approach or a new funding model or more robust support for practices. For reforms to be successful, all three are required. The report also goes further than previous explorations of this issue in looking at the details of implementation of proposed reform measures, for example by showing what a primary health care team looks like and how it works.”

Because Australia has had the same primary healthcare system for so long – almost unchanged since the introduction of Medicare in 1984 – Breadon says it can be hard for people to imagine a different approach. This is one reason why the report aims to make the proposed reforms as tangible as possible.

A range of reasons contributed to previous reform attempts in general practice being stymied but one key factor is the reluctance from peak medical bodies to accept a move away from a fee-for-service funding system, despite the almost universal agreement among experts that this is unsuitable for funding care for people with chronic disease.

Breadon suggests that part of the resistance can be explained by the fact that these peak bodies represent a wide range of views within their membership, which can make it difficult for them to take anything other than a conservative approach to proposed changes.

He also says that some reluctance on the part of the medical establishment to engage with reform agenda may come from previous negative experiences of poorly designed and implemented changes.

“In talking to GPs and medical organisations about the proposals in the report, I found that many of their concerns are about the design and implementation of any proposed reforms. This is understandable given that the problems with some previous attempts at reform where not enough time or effort was put into engagement and planning.”

Breadon describes how Grattan deliberately designed the proposed reforms to be offered to GPs on an “opt in” basis, so that those who are interested in trying a new model can participate and those who don’t are not forced into it.

He is hopeful that if the proposed changes are optional and the implementation done well, the reforms will gain the support of peak medical groups.

The Grattan Report has a strong focus on evidence-based change and provides a useful overview of evidence demonstrating that Australia’s approach to primary healthcare is out of step with the trend towards blended payments and multidisciplinary team care in other comparable countries.

The report also discusses why previous attempts at reform have failed, identifying the following factors:

Breadon stresses the importance of learning from these attempts – the problems encountered and also the successes, which he says indicate that reforms can deliver positive gains for patients and the system as a whole.

“The diabetes trial was successful, with fast enrolment and very promising results, including getting close to net cost savings and improving clinical outcomes such as better HBA1C control.”

He argues that we need to “get out of the cycle of short term reforms” and that successful long term change requires commitment over the longer term, proper resourcing and ongoing review, in order to refine the change before scaling it up.

Primary Health Networks (PHNs) are central to the reforms proposed in the Grattan report – as the commissioning bodies responsible for fundholding some of the additional resources and supporting practices through the change management process.

Breadon acknowledges that currently some PHNs may not have the experience or understanding of general practice required to undertake these tasks but sees their potential to evolve into this role.

“All of the evaluations of previous reform processes, and the literature in this area, suggests that robust change support is required and the PHNs are probably in the best position to do this,” he says.

“It’s true that so far PHNs have not been given the full suite of resources and accountabilities to get to the point where they are shaping local markets and are supported by the bulk of GPs. But it’s a chicken and egg situation – if the PHNs only have two percent of primary healthcare funding and don’t have the data to provide practices with powerful analytics and insights, it’s hard for them to demonstrate their value.”

He agrees that getting to that point will take a degree of trust and that this requires a robust understanding by PHNs and governments of the business of general practice and how change works on the ground.

He also suggests that over time GPs and practices could step into a greater role in primary healthcare policy leadership through participating in the reform process.

“Many general practices can develop in their leadership role in policy and through the sustained reform pathway laid out in our report could come together with other stakeholders to develop a shared future vision for primary health care.”

It also recommends an expanded role for practice nurses and an increase in the number of positions for other primary healthcare providers not currently common in Australia but used in many health systems overseas, such as nurse practitioners and physicians assistants.

Breadon says these workforce recommendations are strongly evidence-based, drawing on international data demonstrating the most effective approaches to primary healthcare. Other information used in the report came from talking to people on the ground in Canada and in the UK, which he said gave the Grattan team a good understanding of how these systems work in practice.

The report also floats the idea of other workforce innovations that could be trialled on a small scale using the proposed funding model. These include new roles such as social prescribers and behavioural health consultants, which show some potential in other countries in improving health outcomes for some groups of consumers.

Breadon says the Grattan team have been really pleased by positive feedback to the report, including the “relatively open” response from medical bodies. He also welcomes indications from the Government that the proposals are being seriously considered.

For these reform proposals to be successful, this support will need to continue.

While one major hurdle has already been overcome – money for reform has already been put on the table by the Government via the Strengthening Medicare Taskforce – many challenges to success reform remain.

Along with those identified above, the reform process will also have to overcome the longstanding lack of trust between the Department and GPs, making it difficult to collaborate on a reform agenda.

At the political level, it will also be important to overcome the desire of governments for short-term gains, leading to a reluctance to commit to long-term changes. However, the current political landscape may work in favour of a longer term vision, given that Labor are likely to be in power for at least two terms.

One positive indication that the Government is open to some significant changes in primary healthcare is a speech made by Department of Health Secretary, Professor Brendan Murphy, at the Australian College of Nursing’s 10 year anniversary Gala Dinner on 26 November 2022.

At this event Murphy said:

“Minister Butler’s Strengthening Medicare Taskforce is currently looking at how to remove barriers so nurses can work to their full scope of practice in primary care, including nurse-led clinics, which had been so successfully operating here in the ACT for many years. There are similar nurse-led models in First Nations community controlled health sector and the increasingly important role we’ve seen over the pandemic in these phone support lines. Health Direct is undertaking a huge advancement in recent years, and of course, a much needed expansion of primary care nurse roles into traditional general practice settings in partnership with GPs.”

Peak medical groups, the Royal Australian College of General Practitioners and the Australian Medical Association, have also been more positive than previously about the need for changes to the way in which primary healthcare is funded and delivered:

We would argue that our general fee-for-service system isn’t broken, but has certainly been severely neglected by successive governments and is in strong need of repair. And part of that repair is reforming it to make sure that we’ve got more flexible funding options to take best care of our patients, particularly those with chronic and complex disease.”

Support for the proposals has also come from peak nursing body, the Australian College of Nursing.

However, some GPs have questioned whether the proposed reforms would relieve pressure on already stressed GPs, citing evidence from the UK that in practice this does not occur. 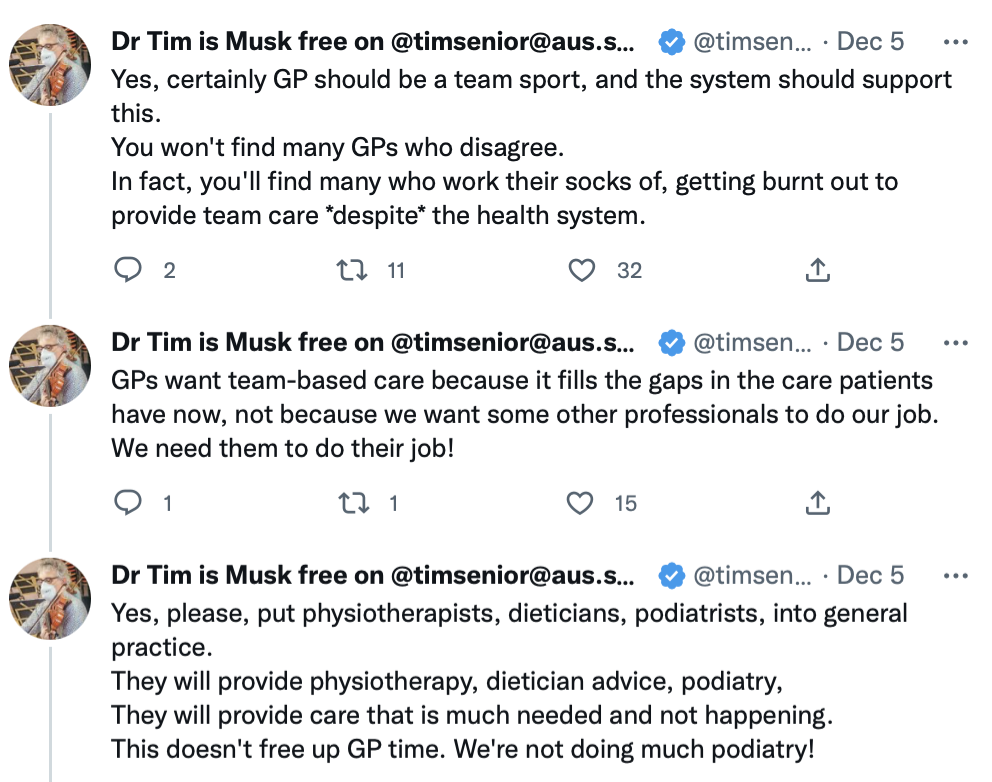 Senior cites this report from the UK, which states:

Employing clinicians who are not GPs did not reduce GPs’ workload or improve their job satisfaction, research found. In the short-term at least, new roles in general practice for other clinicians, such as paramedics and physician associates, increased the time GPs spent delegating tasks and supervising.”

Croakey thanks Dr Bill Coote for drawing our attention to the 1991 NCEPH report mentioned in this story.