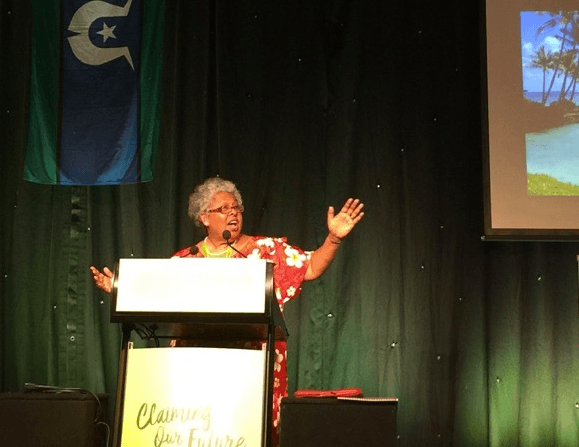 Around the world in 79 days: re-writing colonial narratives

A Churchill Fellowship took her on a “once in a lifetime experience” ­– meetings with Indigenous people in Italy, Finland, Norway, the Netherlands, Britain, Canada, Hawaii and Aotearoa/New Zealand (see map below).

Her aim was to explore how First Nations people had rejuvenated their sense of identity and belonging as a way of healing from intergenerational trauma associated with colonisation, Fergie told the recent Congress of Aboriginal and Torres Strait Islander Nurses and Midwives (CATSINaM) conference.

The trip was healing and empowering, in documenting the importance of First People’s knowledge, language, ceremonies and rituals, said Fergie, who is of Wuthathi, Mabuiag Island and Ambonese descent, and an academic at Australian Catholic University (ACU) in Victoria.

Last year she was inducted into the Victorian Honour Roll of Women for her work in nursing and community health, and was also made an inaugural Fellow of CATSINaM. 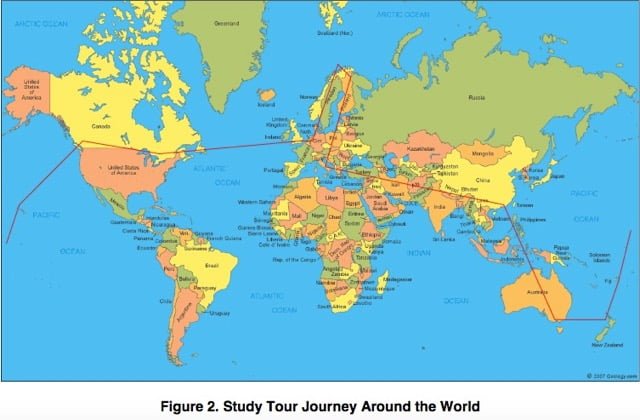 During her travels, Fergie observed an upsurge in self-determination as Indigenous peoples “had become a rising force and perhaps a threat to white-privileged eyes”.

She also witnessed stories of “resilience, pride and growth”, the revitalisation of languages, and greater emphasis being placed on the importance of learning about colonised history and addressing intergenerational trauma.

Fergie found organisations that wanted to work collaboratively with First Nation peoples appreciated and acknowledged openly the need to empower Indigenous perspectives and to ensure First Nations had the freedom to manage their own affairs.

“I found nations successful in closing the gap between themselves and the dominant group because they persevered in sovereignty,” Fergie told Croakey in an interview at the conference (watch it below).

“They said the way forward now was not aggressiveness but negotiation. They shared acts of kindness, the importance of truth telling, justice, healing holistically, valuing reciprocity, respecting the dignity of each individual and being responsible and nurturing our bodies, our community and our natural environment.”

Among the most moving experiences of her Fellowship were visits to the burial sites of two Aboriginal children: a boy who was interred beneath the Basilica of St Paul’s Outside the Walls in Rome, and a girl’s grave in England.

The ACU this year announced a scholarship to commemorate the boy – Francis Xavier Conaci, who in the mid 1850s was sent from New Norcia in Western Australia to Rome to study in a Benedictine monastery, where he was buried in an unmarked grave.

Fergie returned to Australia with a determined commitment to work towards the repatriation of these children’s remains and their spirits.

“To research and find the ancestral remains of Aboriginal children who died 170 years ago in Europe and to repatriate them back to Country is part of healing,” she said. “To stand beside the graveside of two children who died long ago was an incredibly humbling experience.”

Addressing CATSINaM delegates, Fergie urged Indigenous health professionals to ensure their cultural knowledges were valued at least as much as their clinical competencies, and that “our cultural values of respect, caring and sharing” are not lost.

“In our universities we train people to be clinically competent but as Aboriginal and Torres Strait Islander nurses and midwives… we have a world view that is different,” she said.

“We are different from the western world. Professional skills matter, but don’t forget the culture. Go back to country, learn it because you won’t get it in the universities as such.”

Fergie has published a report on her Fellowship’s findings, and it highlights the importance of strengths-based approaches. She writes:

“The continuous murmuring of Indigenous deficit statistics like the high mortality and morbidity rates compared to their Non-Indigenous counterparts, pales into insignificance behind the forward moving models I observed. They focused on a community’s strengths.

“I returned with a better understanding of the evils of colonisation and assimilation and an awareness of the inter-societal structures and political hearsay that posit an illusion of Indigenous support, but who, act counter-productively.

“It seemed that when the Indigenous people and their issues became visible to that society, they were foreseen as a threat to the maintenance of the dominant rule of power. Racism and discrimination came in many subtle forms but their impact continued to be devastating. In contrast, self-determination offered strength and healing, it gave hope for a better future.”

Fergie identified several themes arising from her Fellowship’s investigations, including: the importance of relationships, respect and reciprocity; culture; language; education; self-determination; economy; and health and wellbeing.

She said great gains were being made in tertiary institutions that are solely Indigenous focussed, such as Te whare wananga o Awaranuiangi in Aotearoa/New Zealand, while the Six Nation Polytechnic in Ontario is working toward setting up a First Nation University in their state.

Fergie also cited the Windward Nursing Course in Oahu, which bases the development of cultural care for Indigenous clients by having nursing students to initially learn to care for an organic garden.

The report provides a rich overview of the different situations of Indigenous people globally, as well as their similarities.

In Finland, Fergie visited the Sami Parliament, where she discussed the country’s proposed Truth and Reconciliation Action Plan, while in Norway she saw a Sami Norwegian psychiatric centre and mental health and substance use units called Samisk nasjonal kompetansetjeneste (SANKS), which focus on addressing the impact of intergenerational trauma.

She also learnt how the Sami in Finland and Norway have diversified away from reindeer herding into other jobs within the mainstream, including tourist businesses in Karasjok, Norway, and Siida in Finland, which educate tourists on culture, and sell cultural artefacts and goods.

In the Netherlands county of Friesland, Fergie stayed with Frisian people who are, like the Sami, white Indigenous people. She learnt about the traumas of forced assimilation, as well as how important the slave trade had been in building the country’s wealth.

In Vancouver, British Columbia (BC), she visited the Tsawwassen First Nation (TFN) community who manoeuvred a viable Treaty with BC, and the peak Indigenous Health body – the First Nation Health (FHN) Authority and the Chairperson of their Council.

She learnt that the TFN’s economic viability through the development of the TFN Mills shopping complex and real estate was pivotal in their treaty with the British Columbian Government.

TFN has had its own Government since 2013, the Tsawwassen Legislature, consisting of 13 TFN members elected at a general election, and the Chief. They discuss and make laws, which form the principles that fundamentally organise the Nation.

“Twawwassen First Nation will be a successful and sustainable economy and an ideal location to raise a family… Our Government will help us achieve our goals by communicating, being respectful and taking full advantage of our Treaty powers.”

In Whistler, BC, she saw the Squamish & Li’lwat Cultural Centre, a model developed jointly by the Squamish Nation and Li’lwat Nation that took nine years to be economically viable and self-sustainable, and that provides mentoring to 400 young people each year.

Fergie said her investigations had underscored the importance of understanding the local history of colonisation for true understanding and healing to take place.  She wrote:

“For instance, a gatekeeper spoke about the history of Sami alcoholism in which during the war years there were ration cards for Norwegians etc. At the time, the Sami had control of all the resources such as bush food. They knew the land and were skilled in how and where to get them. These were traded via their Scandinavian ration cards for alcohol.

“By knowing this fact this may remove the Sami ‘veil of shame and guilt’ that the dominant society had developed and stereotyped Indigenous people to be the ones at fault. There are similar stories placed on Indigenous Australians that have led to their negative stereotyping.”

In 1873, when the French author Jules Verne published his famous novel, Around the World in Eighty Days, it perpetrated many colonial stereotypes and agendas.

In 2017, Dr Doseena Ferbie took just 79 days to show how First Nations peoples are resisting, challenging and re-writing colonial narratives, while ensuring that their own narratives endure, develop and flourish.

She ended her CATSINaM presentation by urging Aboriginal and Torres Strait Islander people to apply for Churchill Fellowships – applications close on 27 April 2018. 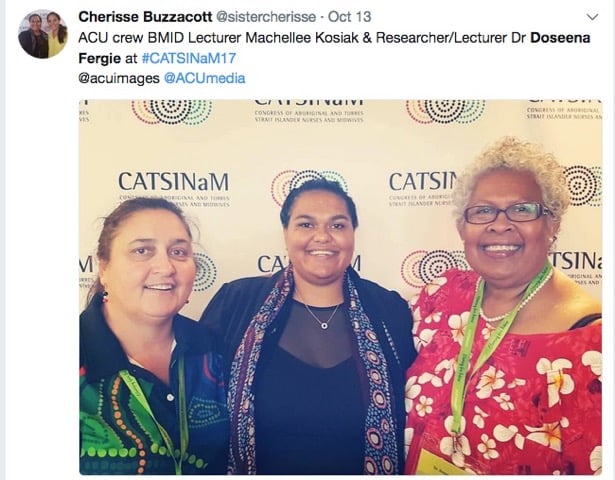 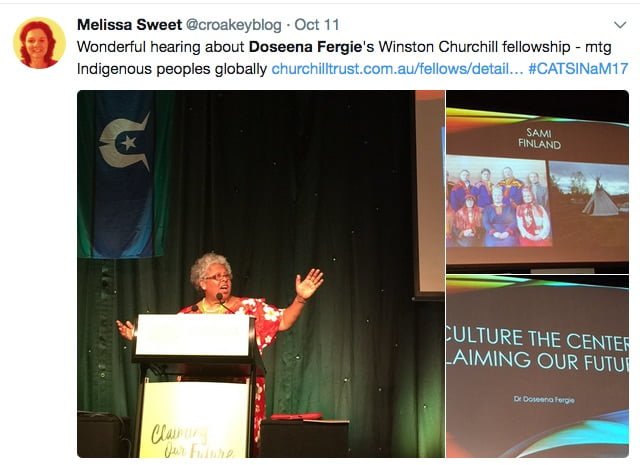 Bookmark this link to follow our coverage of the CATSINaM conference at Croakey.

PrevPrevious“Keep a copy of the Uluru Statement, share it, talk about it, understand it. It is history in the making”
NextCup Day: time not for a flutter but for greater transparency & courage on gambling reformNext