“As a nation, we should be unified in an unwavering commitment to stop Aboriginal deaths in custody”

Many of the celebrations of the 800th anniversary of the Magna Carta as a symbol of liberty and freedom ring very hollow for Aboriginal and Torres Strait Islander people.

However, one recent conference examining the Magna Carta legacy did acknowledge the “justice gap”, describing the increasing incarceration rate of Aboriginal and Torres Strait Islander peoples as “one of the most significant social problems anywhere in the developed world”.

The article below is an edited version of a presentation to the National Access to Justice and Pro Bono conference by Eddie Cubillo, executive officer of the National Aboriginal & Torres Strait Islander Legal Service (NATSILS).

He gave many examples of how and why the justice system is failing Aboriginal and Torres Strait Islander people. Tragically, just a few days after this speech was delivered, a 40-year-old Aboriginal man died in custody in the NT – the second such death there in less than a month.

Meanwhile, the #savetheCNS campaign continues to preserve the life-saving Custody Notification Service. How many health professionals are lending their weight to this campaign?

The Magna Carta: what does it mean for Aboriginal and Torres Strait Islander peoples?

The Magna Carta speaks to us from Medieval England, acknowledging, in writing, that no-one in society is above the law: not the King nor his subjects, not the government nor the governed.

As an affirmation that authority should be subject to law arising from the community itself, Magna Carta is a foundation stone of constitutional and parliamentary government.

However, it is clear that the principles of the Magna Carta are not inclusive of Indigenous Australians.

Below I explore two issues – the Racial Discrimination Act (RDA) and the criminal justice system – and show that equality and fairness before the law remains a problem in this country for Indigenous Australians.

The RDA has been suspended on three occasions: To amend the Native Title Act 1993 (Cth) (which removed existing guarantees of rights to Indigenous people); When enacting the Hindmarsh Island Bridge Act 1997 (Cth) and; The Northern Territory National Emergency Response (also referred to as “the Intervention”).

Since the Intervention, discrimination has been felt in a number of ways, perhaps most starkly when Aboriginal people access basic services such as in shops, or otherwise are subject to measures that apply only to them and demonise them as alcoholics or paedophiles.

Consider what our older people would have thought when they saw the convoy of army vehicles rolling in.  One comment I heard was that ‘this isn’t a country at war’.  Not surprisingly, people in remote locations did not understand why the military was in their communities. (Many of our elderly people had experienced the bombing of the top end).

The most humiliating was the signs that were erected outside of our communities. As well, they were subject to the confusion of income management, which in time they found required them to line up, in separate queues in supermarkets to use a basics card.  This brought back old and painful memories of segregation.

The Kartinyeri case decided that the Australian Constitution authorises the Commonwealth to pass racially discriminatory legislation.

Suspending the Race Discrimination Act under s51 (xxvi) – to allow the ‘Intervention’ took the retrograde step of suspending essential Anti-Discrimination laws in this country and included laws and policies that discriminate against people who are Aboriginal because they are Aboriginal.  This legitimised the views of those who believe that it is OK to treat people differently because of their race.

The ability of the government to act discriminatorily against Aboriginal and Torres Strait Islander under constitutional powers is an affront to the rule of law and the right of all to be treated equally under the law.

Discrimination continues to be felt across a number of other key areas from land rights under native title to criminal justice.

Discrimination remains a significant issue both in the law and its application. Particular areas of concern include the paperless arrest laws in the NT and mandatory sentencing laws.

Paperless Arrests
The Northern Territory’s “paperless arrest” laws, introduced late last year, give police the power to lock someone up for four hours for minor offences like making undue noise; swearing in public; or keeping a front yard untidy.

A person locked up under these powers has no effective opportunity to challenge their detention or to ask a court to release them. The police essentially act as both judge and jury.

The Northern Territory’s Attorney General said that the new paperless arrest laws make it simpler for police to “catch and release people”.

Police have a tough job and every reasonable effort should be made to make their job easier, but efficiency is not the be-all and end-all and it is argued that the law is in conflict with the principle that no person should be deprived of their liberty arbitrarily.

It is clear that the laws are having a disproportionate impact on Aboriginal and Torres Strait Islander people. Of the 700 times that the law was used in the first three months of its operation, more than 75 per cent of those affected have been Aboriginal.

Recently a respected Aboriginal elder passed away whilst in police custody. He had been arrested and detained under a paperless arrest. He died the most inhuman of deaths: without family around, on a cold, concrete floor of a police cell.

As a nation, we should be unified in an unwavering commitment to stop Aboriginal deaths in custody. All governments’ laws, policies and practices should support, rather than undermine this end.

This law, which is in flagrant disregard for the rule of law, must be repealed to ensure further tragedies do not occur.

Mandatory Sentencing
This eliminates the judiciary’s ability to consider appropriate mitigating factors so as to arrive at the most appropriate sentencing outcome; is an arbitrary contravention of the principles of proportionality and necessity; and has a discriminatory effect on Aboriginal and Torres Strait Islander offenders.

According to the Western Australian Department of Justice’s Review of the three-strikes laws, over 81% of juveniles sentenced under the laws were Aboriginal.

From 2000 to 2005 approximately 87% of all children sentenced under the mandatory sentencing laws were Aboriginal.

Other issues of concern include:

The unnecessary imprisonment of Aboriginal and Torres Strait Islander peoples in regional and remote areas due to a lack of appropriate bail addresses; this is particularly concerning in relation to juveniles.

None of this is to deride the idea of the rule of law and its traditions – it is to say that it has not been applied equally to Aboriginal and Torres Strait Islander people, from the loss of our lands that precedes our current imprisonment rates, to current racially discriminatory laws.

The Magna Carta continues as a symbol of liberty and freedom today. While this affirmation of fundamental freedoms is important, it should also be noted that the Magna Carta and its legacy are problematic.

It can too easily be been seen as providing affirmation of this country’s past and traditions, while ignoring that the rights and freedoms it contains have certainly not applied equally to all.

The law has been complicit in some of the worst atrocities committed against Aboriginal and Torres Strait Islander people and continuing today. We cannot let the fine spirit and principles of this document be used to ignore this past.

There won’t be a single bullet that cures all areas of disadvantage faced by Aboriginal and Torres Strait Islander people, but real constitutional reform would have important symbolic significance to ensure that our foundational document removes the racist elements that still pervade our Aboriginal and Torres Strait Islander people and their communities. 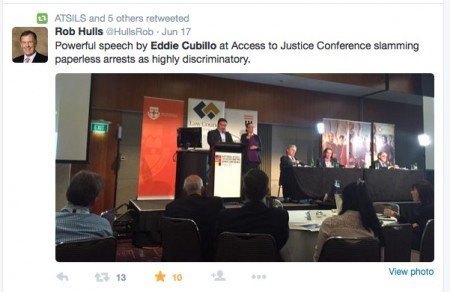 This article is published as part of Croakey’s ongoing #JustJustice project. Details of the individuals and organisations supporting this project are published at the bottom of this page.

We would particularly like to acknowledge the generous support of the two premium sponsors of #JustJustice.

Frank Meany of One Vision