Signs of the times

As all roads lead to #COP24, it is the children who provide leadership

It was incredibly moving and uplifting to watch as thousands of school children took to the streets last week on a #climatestrike, to argue their rights to a safe future and a healthy planet.

In time-honoured strategies of effective communication, the students showed themselves to be adept at using humour, metaphor and emotion, with placards bearing such pearls as:

The oceans are rising and so are we.

Every kid deserves a safe climate.

Why should we go to school if you won’t listen to the educated!!

Don’t be a fossil fool.

And, a personal favourite: I’ve seen smarter cabinets at IKEA.

In response to the Government’s tone-deaf commentary deriding the children’s activism, there was also: We’ll be less activist if you’ll be less shit.

Many took comfort from the students’ advocacy. NSW Greens Senator Dr Mehreen Faruqi tweeted: “We all need some hope. The inspiring #ClimateStrike was a brilliant reminder that We’re Not Totally F**cked Yet!”

Refugee advocate Kon Karapanagiotidis said that walking past thousands of striking school children filled his heart with pride. “I have hope for the future with such passionate young people,” he tweeted. 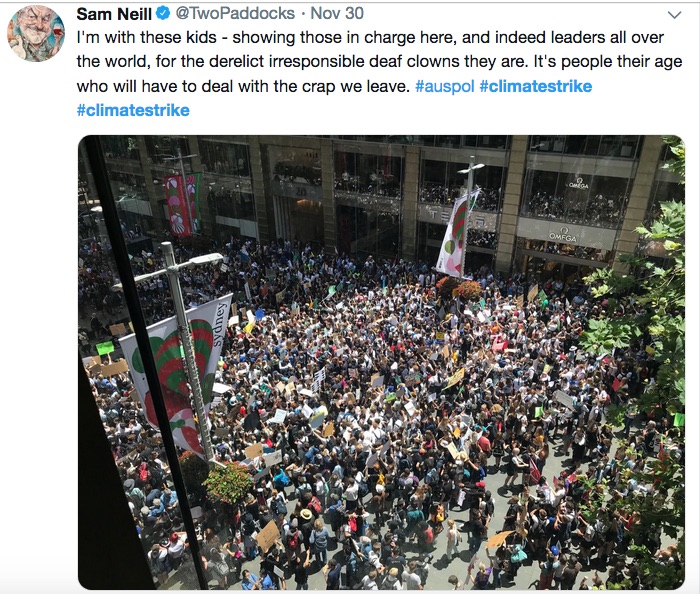 Greta Thunberg, the Swedish student who inspired student marches around the world (as profiled in The New Yorker recently), thanked those joining climate strikes as she hit the road to Katowice in Poland, which this week hosts the 24th Conference of the Parties to the United Nations Framework Convention on Climate Change, otherwise known as COP24.

But the big turnout for #climatestrike is also a devastating reminder of the intergenerational injustice of climate change. What must be going through these children’s minds as they ponder their futures?

“I am here because I am terrified,” one 14-year-old told the crowd in Melbourne, according to a report in the New York Times that linked the march with the week’s bushfires, heatwave and Adani’s announcement that it would proceed with its coal mine.

And it is terrifying

In recent weeks, significant publications have highlighted both the scale of the climate impacts already being felt and the inadequacy of responses to date.

The 2018 report of “The Lancet Countdown on health and climate change: shaping the health of nations for centuries to come” tracks progress across 41 indicators, and makes for mostly grim reading (read it here).

The authors report that their findings “provide great cause for concern, with the pace of climate change outweighing the urgency of the response”, even as the negative effects of climate change on human health continue to multiply.

The report’s four key messages are:

1. Present day changes in heat waves, labour capacity, vector-borne disease, and food security provide early warning of the compounded and overwhelming impact on public health that are expected if temperatures continue to rise. Trends in climate change impacts, exposures, and vulnerabilities show an unacceptably high level of risk for the current and future health of populations across the world.

2. A lack of progress in reducing emissions and building adaptive capacity threatens both human lives and the viability of the national health systems they depend on, with the potential to disrupt core public health infrastructure and overwhelm health services.

3. Trends in a number of sectors are helping to generate the beginning of a low-carbon transition, and clearly the nature and scale of the response to climate change will be the determining factor in shaping the health of nations for centuries to come.

4. Ensuring a widespread understanding of climate change as a central public-health issue will be vital in delivering an accelerated response, with the health profession beginning to rise to this challenge.

Among the concerns raised

• Vulnerability to extremes of heat has steadily risen since 1990 in every region of the world, with 157 million more people exposed to heatwave events in 2017, compared with 2000, and with the average person experiencing an additional 1.4 days of heatwaves per year over the same period. For national economies and household budgets, 153 billion hours of labour were lost in 2017 because of heat, an increase of more than 62 billion hours (3.2 billion weeks of work) since 2000. The direct effects of climate change extend beyond heat to include extremes of weather. In 2017, a total of 712 extreme weather events resulted in US$326 billion in economic losses, almost triple the total losses of 2016.

• Global employment in fossil-fuel extractive industries actually increased by 8 percent between 2016, and 2017, reversing the strong decline seen since 2011.

• Mitigation action to date is still far lower than the action required to meet the aspirations of the Paris Agreement to keep warming well below 2 degreesC.

• There are many examples of stagnated mitigation efforts, with a crucial marker of decarbonisation—the carbon intensity of total primary energy supply—remaining unchanged since 1990. A third of the global population, 2.8 billion people, live without access to healthy, clean, and sustainable cooking fuel or technologies, which is the same number of people as in 2000.

• In the transport sector, per-capita global road-transport fuel use increased by 2 percent from 2013 to 2015, and cycling comprises less than 10 percent of total journeys taken in three-quarters of a global sample of cities. The report says:

The health burden of such inaction has been immense, with people in more than 90 percent of cities breathing polluted air that is toxic to their cardiovascular and respiratory health.

Indeed, between 2010, and 2016, air pollution concentrations worsened in almost 70 percent of cities around the globe, particularly in low-income and middle-income countries.”

On the positive side

• In 2017, a new milestone was reached, with more than 2 million electric vehicles on the road, and with global per-capita electricity consumption for road transport increasing by 13 percent from 2013 to 2015. China is responsible for more than 40 percent of electric cars sold globally.

• 2017 saw a substantial rise in the number of medical and health professional associations actively responding to climate change. In the USA, the US Medical Society Consortium on Health and Climate represents 500,000 physicians. This organisation follows the formation of the UK Health Alliance on Climate Change, while organisations like the European Renal Association– European Dialysis and Transplant Association and the UK’s National Health Service (NHS) are committing to reducing the contributions of their clinical practice emissions. The NHS achieved an 11 percent reduction in emissions between 2007 and 2015.

• Globally, coverage of health and climate change in the media has increased substantially between 2007 and 2017. Following this trend, the number of academic journal articles published on health and climate change has almost tripled over the same period. (As outlined further below, this situation is quite different in Australia, however.) Yet, the authors noted that across the media, science, government, and the corporate sector, climate change is being framed in ways that largely ignore its health dimensions. Thus, analyses of national newspapers and scientific journals indicate that less than five percent of climate change coverage relates to health.

The collaboration’s findings for Australia were reported in the The Medical Journal of Australia under the title, “Australian policy inaction threatens lives”.

The authors said that Australia has gone backwards in a number of respects, and now lags behind other high income countries such as Germany and the United Kingdom. They cited the persistence of a very high carbon-intensive energy system, Australia’s slow transition to renewables and low carbon electricity generation, and “the overall poor state of progress on climate change and health in Australia”.

Adaptation planning in Australia is, with the exception of the ACT and Queensland, not very comprehensive.

Few jurisdictions recognise the importance of building resilience through improving underlying population health, the impacts that climate change (including extreme events) are likely to have on the health of the population, and the need for the health system itself to be resilient and responsive to the challenges brought by climate change.

While many local councils have been active in adaptation planning, their impact is geographically highly constrained and they are limited by what is possible under state/territory and federal legislation.

Heatwave response planning is the area which is most advanced, with all states and territories having a plan in place that recognises the vulnerability of certain population groups to extreme heat.”

This was “in striking contrast” to the worldwide increase in newspaper coverage.

“This means that many Australian people may be missing out on information that is readily accessible in other parts of the world,” the authors stated.

Further, a qualitative analysis of all the included articles published between 2015 and 2017 found that 53 percent of articles did not include any recommendations for action.

These findings suggested “that Australian newspapers should provide recommendations for both adaptation and mitigation with a positive perspective, to recognise not only the risks but also the opportunities in dealing with health and climate change”.

The article also noted the dearth of programs, policies and statements on Australian parliamentary and departmental websites on climate change or human health.

The authors said Australia had moved from being a leader in reducing greenhouse gas emissions to abolishing government agencies dedicated to climate change mitigation and adaptation.

They said: “Amid this change of policy direction, human health has remained absent in policy debates at the Australian Government level.”

A focus on equity from the United States

Meanwhile, the US Government’s Fourth National Climate Assessment stresses the importance of centring equity considerations in responding to climate change.

It also describes the importance of engaging at-risk communities in designing responses, and of increasing the resilience of these populations.

The report notes that social, economic, and geographic factors shape the exposure of people and communities to climate-related impacts and their capacity to respond.

It warns that marginalised populations may also be affected disproportionately by actions to address the underlying causes and impacts of climate change, if they are not implemented under policies that consider existing inequalities.

The report says that resilience is enhanced by community-driven planning processes where residents of vulnerable and impacted communities define for themselves the complex climate challenges they face and the climate solutions most relevant to their unique vulnerabilities.

These communities include poor people in high-income regions, minority groups, women, pregnant women, those experiencing discrimination, children under five, persons with physical and mental illness, persons with physical and cognitive disabilities, the homeless, those living alone, Indigenous people, people displaced because of weather and climate, the socially isolated, poorly planned communities, the disenfranchised, those with less access to healthcare, the uninsured and underinsured, those living in inadequate housing, and those with limited financial resources to rebound from disasters.

As with The Lancet report, the overall message is grim. Without significant change, the report warns that it “is very likely that some physical and ecological impacts [of climate change] will be irreversible for thousands of years, while others will be permanent.”

And so we look with hope, and other emotions too, to an international youth movement kick-started by Greta Thunberg, whose Twitter profile says, “15 year old climate activist with Asperger’s”.

The adults have failed us. And since most of them, including the press and the politicians, keep ignoring the situation, we must take action into our own hands, starting today.” 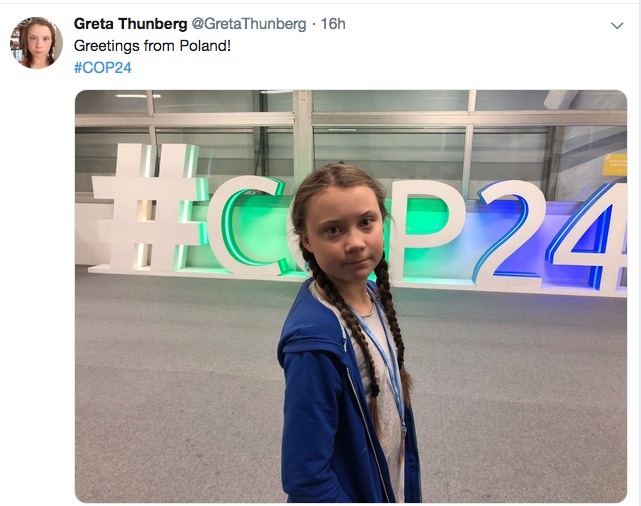