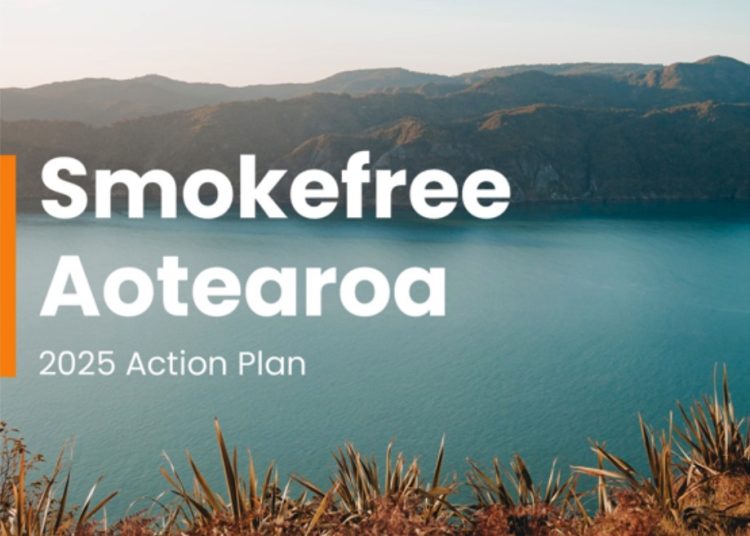 As Aotearoa New Zealand leads the way on tobacco control, will Australia step up?

Introduction by Croakey: Aotearoa New Zealand has announced a ground-breaking plan to become smokefree by 2025, in a “bold” policy move that public health experts hope will inspire similar innovation in Australia. 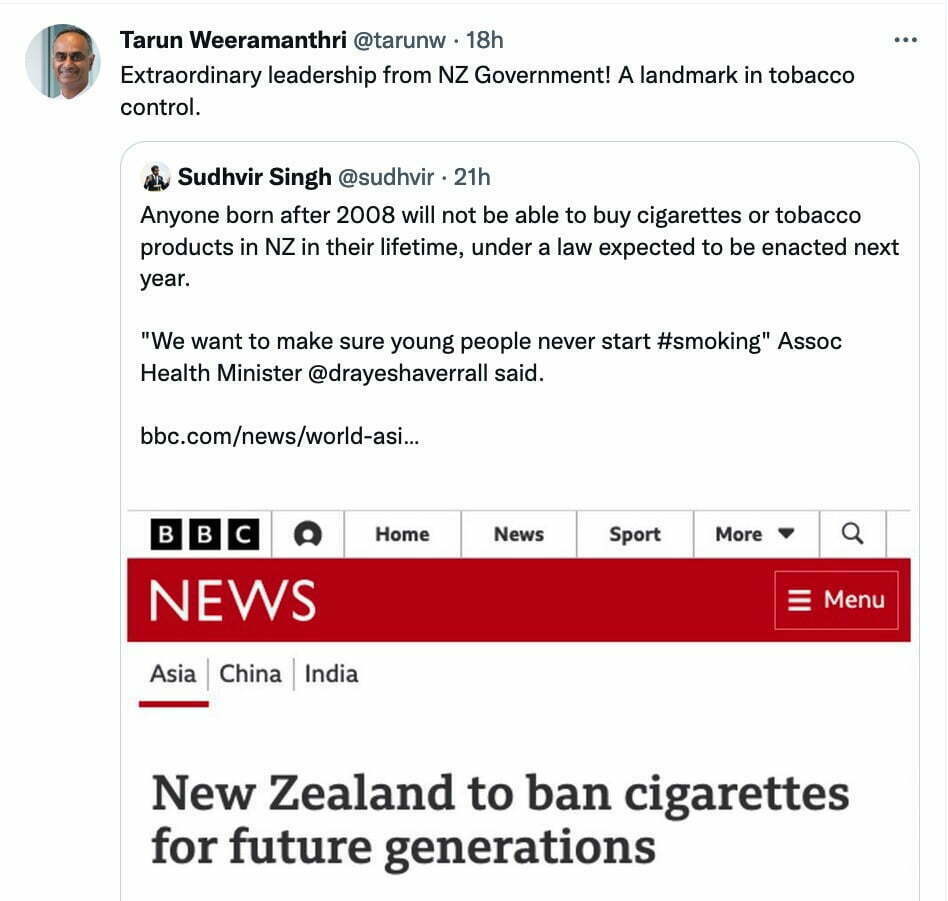 Associate Professor Coral Gartner, Director of the NHMRC Centre of Research Excellence on Achieving the Tobacco Endgame at the University of Queensland’s School of Public Health, outlines the plan below, ahead of the launch on 13 December of Australia’s National Preventive Health Strategy.

“Australia prides itself as a global leader in tobacco control; however, there has been little policy innovation since the implementation of tobacco plain packaging laws in 2012,” she writes.

This week, the Aotearoa New Zealand Government released an Action Plan to achieve a Smokefree Aotearoa by 2025. If successful, the Action Plan puts New Zealand firmly in the position of potentially being the first country to essentially end the cigarette epidemic.

The bold plan includes a number of strategies that will be implemented over the next four years, including reducing the nicotine content of cigarettes to minimal levels, reducing the number of retailers who can supply cigarettes, banning the supply of cigarettes to anyone born after a set year to create a smoke-free generation, and potentially other product standards that reduce the appeal and attractiveness of cigarettes.

The plan also includes increased quit support services for people who smoke and grants to increase community participation in the Action Plan.

Importantly, the plan is underpinned by the establishment of a taskforce to ensure Māori leadership in all aspects of the plan’s implementation. This recognises the history of this goal, which was recommended by the 2010 Māori Affairs Select Committee’s inquiry into the tobacco industry in New Zealand and the consequences of tobacco use for Māori.

Also reflecting a focus on equity, the Action Plan’s goal is to reduce smoking prevalence to less than five percent for all population groups, down from 31.4 percent for Māori and 13.4 percent for non-Māori in 2019/20.

Overall, tobacco smoking is responsible for 4,790 premature deaths in Aotearoa New Zealand and 9.6 percent of the burden of disease, and is a substantial driver of health inequalities between Māori and non-Māori.

On Monday, Australia’s National Preventive Health Strategy will be launched; it is expected to include the goal of reducing Australia’s overall smoking prevalence to less than five percent by 2030.

This is less ambitious than New Zealand’s target in both the timeframe (five years later) and scope (the figure is for the whole population with a separate goal of reducing smoking to 40 percent by 2023 for Aboriginal and Torres Strait Islander peoples).

Some of the policy targets outlined in the draft strategy released in March included “stronger regulation of the contents and product disclosures pertaining to tobacco products” and reducing the “supply, availability and accessibility of tobacco products.”

These goals could also pave the way for Australia to set a low nicotine content standard or to implement the large-scale supply reduction measures proposed for New Zealand, including a Tobacco Free Generation law. However, there was little detail provided in the draft strategy.

Australia prides itself as a global leader in tobacco control; however, there has been little policy innovation since the implementation of tobacco plain packaging laws in 2012.

Nationally, the main strategy over the past decade has been an annual 12.5 percent increase in tobacco excise, above biannual inflation adjustment. The last of these tax increases ended in 2020, although reducing the affordability of tobacco products was also listed as a policy goal in the draft National Preventive Health Strategy, possibly indicating a re-instatement of these annual tax increases.

While this tax policy has likely reduced demand for cigarettes, the decline in smoking prevalence has been relatively slow with regular smoking (weekly or daily) only dropping 1.8 percent from 2013 to 2019 (a relative decline of 12.7 percent) compared to a drop of 3.7 percent (relative decline of 20.7 percent) between 2007 and 2013.

It is clear that new approaches will be needed to reinvigorate quit activity in Australia and achieve the 2030 goal of less than five percent of the population smoking.

Furthermore, progress on reducing smoking will only be truly meaningful if the benefits are shared equitably among all groups.

According to the National Drug Strategy Household Survey, around half of all people who smoke in Australia try unsuccessfully to quit smoking each year. The actual rate of unsuccessful quit attempts is likely to be much higher than reported due to people dismissing or forgetting unsuccessful attempts of short duration.

Increasing the success rate of these quit attempts would make a big difference to decreasing smoking prevalence. Expanding smoking cessation support for people who currently smoke is also an essential element highlighted in the New Zealand Action Plan.

Australia could similarly expand the options available for quit support, particularly by providing targeted intensive support for populations with high smoking prevalence, such as people with a lived experience of mental illness.

However, changing the environment in which people live, work and shop, such as reducing the retail availability of cigarettes, will also support people to quit and resist relapse. The importance of addressing the societal, environmental and commercial factors that maintain smoking, rather than viewing smoking as ‘an individual issue’, is recognised in the New Zealand Action Plan.

Current tobacco control measures are largely focused on changing individual behaviours, for instance, through encouraging people not to start smoking or to stop smoking. While important, this approach has not worked for everyone. Smoking rates have reduced faster among those with access to greater resources.

The onus of responsibility for reducing our smoking rates must not, therefore, sit with the individual who smokes.

The actions that will require legislative change focus instead on changing the broader environment in which we all live, to make it easy for children and young people to remain smokefree and for those who smoke to quit. These actions have been designed to have equitable reach and to have an impact on all people who smoke.”

Strengthening Australia’s ability to respond to and control the illicit tobacco market is another critical issue that we would be wise to address as part of a comprehensive tobacco control strategy.

A recent Parliamentary Inquiry outlined the challenges that are currently faced by our law enforcement officers in tackling illicit tobacco. Many of these challenges are addressable by facilitating improved cooperation between state and federal police.

Implementing a national tobacco retailer licensing scheme would also improve the ability of all levels of government to monitor and take action against suppliers of illicit tobacco.

Furthermore, we need research on measures that can reduce demand for illicit tobacco as well as the supply.

Australia’s next National Tobacco Strategy has been in development for some years now.

Hopefully, the policy boldness shown by our neighbours in New Zealand will provide inspiration for including similar innovation and bold action to end the cigarette epidemic in Australia.

• Associate professor Coral Gartner is the Director of the NHMRC Centre of Research Excellence on Achieving the Tobacco Endgame (Tobacco Endgame CRE) at the University of Queensland’s School of Public Health. She is the Regional Editor for Australasia for the BMJ journal, Tobacco Control, after serving as a senior editor from 2012-2018. She is currently the President Elect of the Oceania Chapter of the Society for Research on Nicotine and Tobacco (SRNT-O), and was a member of the Australian Academic of Health and Medical Sciences’ (AAHMS) Policy Committee from 2019-2021. She leads a multidisciplinary research team of international experts located in Australia, New Zealand, and Canada, to develop the evidence base for tobacco endgame strategies and to identify the most promising policies that could end the cigarette epidemic in Australia, and beyond. Her research program includes consideration of how these policies could be implemented, while mitigating potential unintended impacts and increasing equity.

PrevPreviousBack to the Fire: a journey of healing and belonging
NextViewing the healthcare system through a deaf lensNext