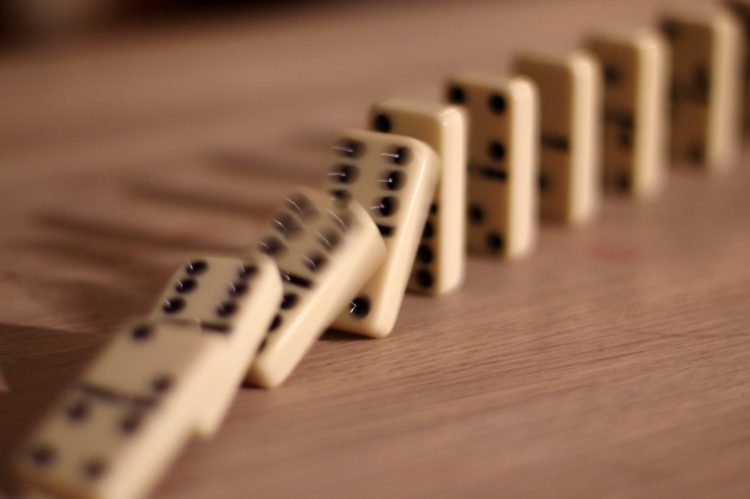 As Australia wins another challenge to tobacco plain packaging, that sound you hear is the dominoes toppling

On a cold Friday morning, Australians woke to some news worth celebrating.

In a move that, as Simon Chapman told ABC Radio’s Jen Fleming, was “very significant but not unexpected,” the World Trade Organisation found in favour of Australia in challenges from Cuba, the Dominican Republic, Honduras, and Indonesia, to our tobacco plain packaging laws.

Chapman told Fleming that the finding was unsurprising because the laws had been challenged and upheld three times before.

For those of us with short memories, that’s once in the High Court of Australia in 2012 (major tobacco companies including British American tobacco, Philip Morris, Imperial Tobacco and Japan Tobacco were roundly defeated, 6-1), once at the Permanent Court of Arbitration in 2015, when Phillip Morris claimed Australia was in breach of a Bilateral Investment Treaty, and once before at the World Trade Organisation.

As Chapman has said before, there is bound to be another appeal, or another action, or an action from another angle but, in the meantime it’s worth celebrating Australia’s leadership, and the message that the finding sends to other countries as plain packaging “dominoes” around the world.

“I fully expect that plain packaging will become the norm within fifteen years around the world,” Chapman told Fleming.

A statement from the World Health Organization put forward a similar opinion:

“Today, six other countries have implemented plain packaging laws (Hungary, Ireland, France, New Zealand, Norway and the United Kingdom), another six have passed laws yet to be implemented (Burkina Faso, Canada, Georgia, Romania, Slovenia and Thailand) and a number of other countries are examining the policy.”

A joint statement from federal Trade Minister, Steven Ciobo, and Bridget McKenzie, Minister for Rural Health, described the panel’s report as a “resounding victory,” and reiterated the Government’s commitment to defending any appeal proceedings.

A statement on behalf of of the Public Health Association of Australia from CEO Terry Slevin, said plain packaging had been an effective reform that had enjoyed bipartisan political support and effective public health assistance, particularly from the Cancer Council of Victoria, with implementation.

“In its Australia’s Health 2018 report last week, the Australian Institute of Health and Welfare noted that smoking rates in Australian teenagers fell from 5% in 2013 down to 2.1% in 2016. This reinforces one of the primary objectives of plain packaging which was to dissuade children in taking up smoking,” 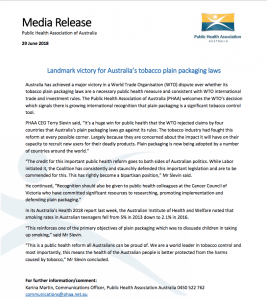 Kylie Lindorff, Manager of Tobacco Control Policy at Cancer Council Victoria, cited the Government’s post-implementation review, saying that it had been estimated that Australia had 100,000 fewer smokers as a result of plain packaging.

“Plain packaging is an important part of Australia’s long-standing and comprehensive approach to tobacco control.” She said in a media release.

“An article recently published in the Lancet noted that Australia is one of only 13 countries (out of 195), in the world where smoking declined both between 2005 and 2015 as well as between 1990 and 2005 (ABS National Health Survey data).”

Below are a selection of responses from Twitter, including some from those who have been around long enough to remember plain packaging’s original political champions. May the dominoes be perfectly aligned! 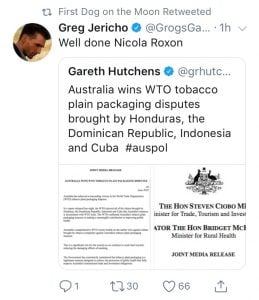 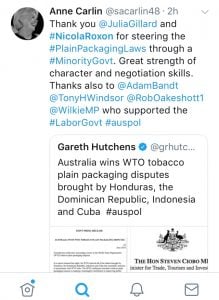 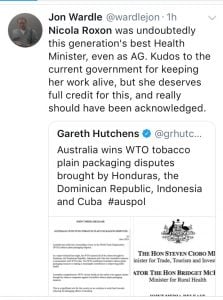 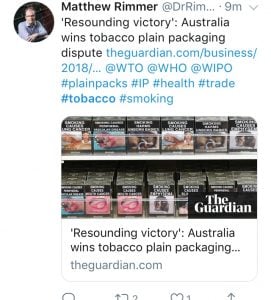 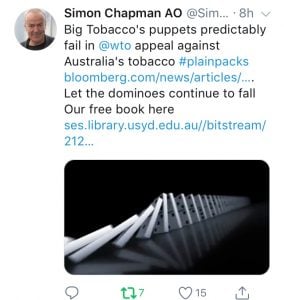 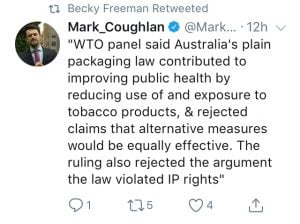 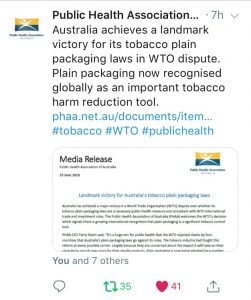 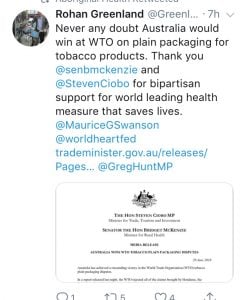 PrevPreviousJournalWatch: Housing in Aboriginal communities is too important for the too hard basket
NextThe Book of Kells and Australia’s MBS reviewNext