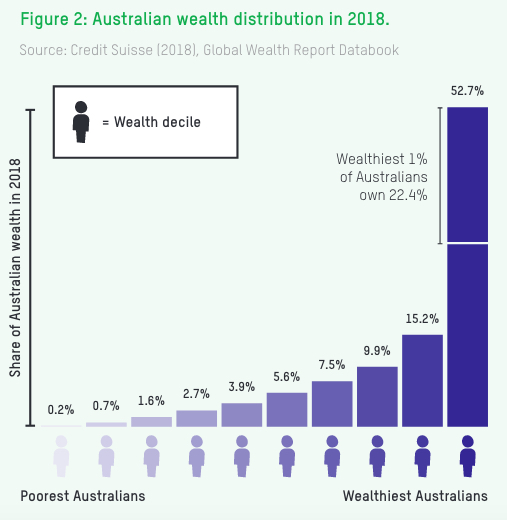 The gulf between Australia’s richest and most disadvantaged has deepened, with the number of billionaires and their share of collective growth ballooning, leaving the most vulnerable — women, particularly Aboriginal and Torres Strait Islander women —  behind.

These are the findings from the latest Oxfam analysis of global inequality, published to coincide with the World Economic Forum’s annual Davos Summit in Switzerland.

The report, Public Good or Private Wealth, shows that the world’s billionaires increased their wealth by $3.5 billion a day in 2018, while the poorest 50% saw theirs slide 11 percent — with the impact felt disproportionately by women and girls.

In Australia, Oxfam said ten new billionaires were minted in 2018 to a national record of 43, with their combined wealth hitting $160 billion — growth of $100 million per day.

The Australian billionaire wealth increase of $36 billion last year is enough to fund about half of the Australian Government’s total health budget for the 2018-19 financial year.

Australia’s richest 1% now control 22% of the nation’s wealth, more than the poorest 70% combined, Oxfam reports, with more than one in three of the nation’s top corporations not paying any tax for the past four years. The resulting tax gap — some $2 billion — is more than double what the federal government has committed to Aboriginal and Torres Strait Islander health.

While the richest get richer, it’s women and particularly Aboriginal and Torres Strait Islander populations that are bearing the brunt, Oxfam says.

Some 80% of Indigenous households have weekly incomes below the national average and 36% fall into the lowest income quartile.

For Aboriginal and Torres Strait Islander women, infant mortality remains double that of the rest of the population — triple in remote areas — and this gulf is widening rather than improving. Stillbirths are 60% higher in the Indigenous population.

Taken together, Oxfam suggests this data points to inequalities of access for Aboriginal and Torres Strait Islander women.

For Australian women more generally, income inequality endures, with 85 cents earned on average by a woman for every dollar earned by a man, and a gender pay gap existing in every single industry nationwide.

In addition, the Oxfam report highlights that 65% of women do more than 5 hours of unpaid work per week due to care responsibilities, contrasting with 60% of men who do less than 5 hours. According to Oxfam, this work has been valued at up to 41% of GDP.