As capabilities boom, a careful look at cancer screening

Technological advances are heralding a new era of personalised medicine in the detection and treatment of cancer, but what does this mean for screening?

An important new themed edition of the Public Health Research and Practice journal examines the benefits, harms and controversies in Australia’s cancer screening programs, with a series of papers that are all worth  your time.

We’ve sampled a selection below, but do encourage you to check the edition out in full.

The paradox of screening in cancer is that it is most likely to find the slow-growing or dormant malignancies that are least likely to harm us, resulting in overdiagnosis — most particularly of neoplasms in the prostate, thyroid, breast and lung, according to this piece by Stacy Carter and Alexandra Barratt. 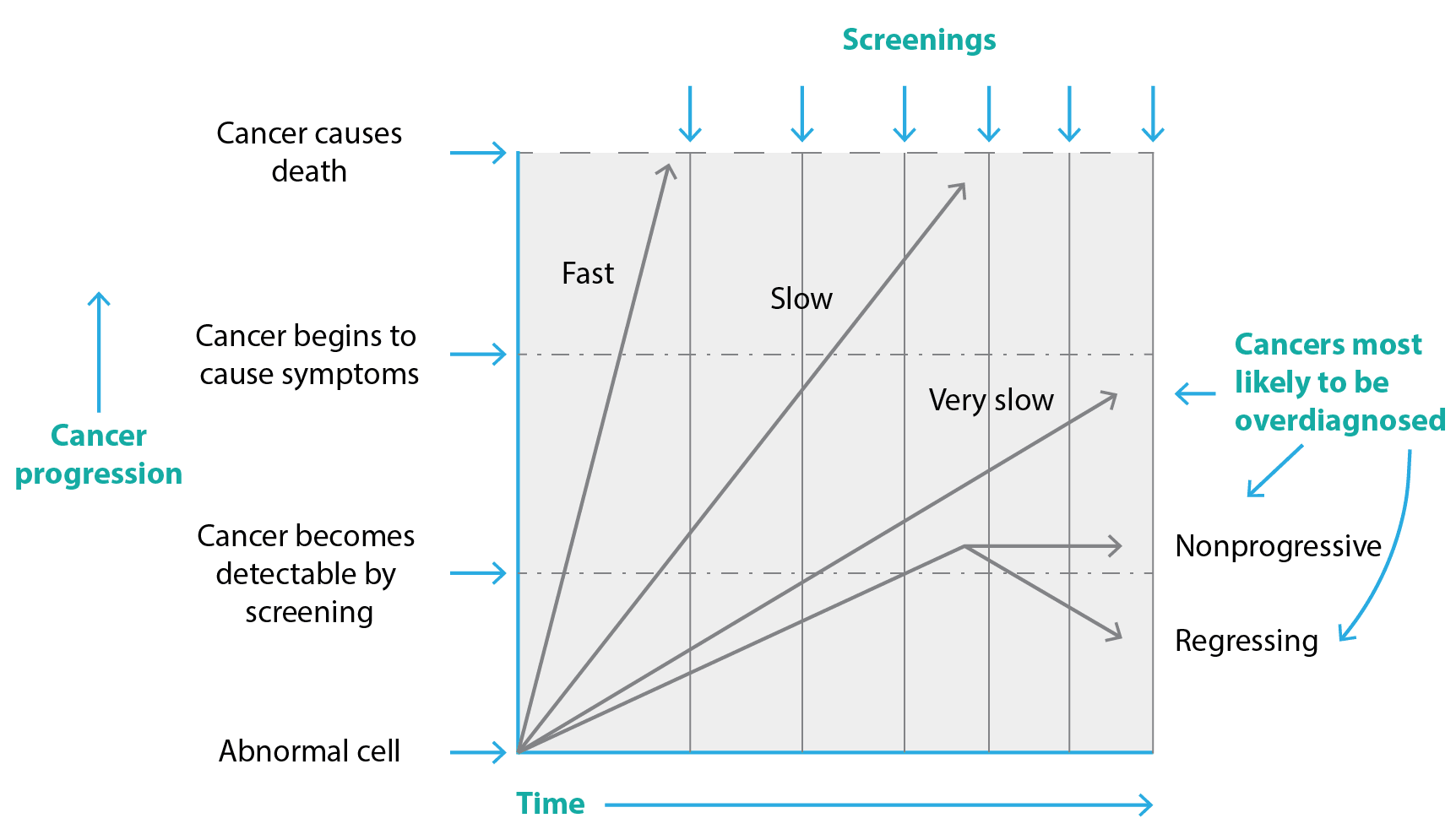 Overdiagnosis is a problem because these cancers may not progress (they may even regress), would not have necessarily produced symptoms, nor led to premature death.It goes without saying that this also results in increased costs to the health system.

Lamenting the polarised nature of debates over screening (‘perceived pro-screening or anti-screening camps’), the authors urge open, rigorous, scientific discussion over the harms and benefits of screening and more research into whether different approaches to the lowest-risk cancers could reduce overdiagnosis risk.

However, these risks are often downplayed in screening messaging and the benefits amplified, with misleading communication of outcomes (using measures like five-year survival and relative risk) to persuade participation rather than supporting informed choice, according to an analysis by Gemma Jacklyn, Katy Bell and Andrew Hayen.

Due to lead-time and length-time bias of screening (see below), five-year survival is a skewed way of reporting efficacy, while relative risks overstate benefits compared with absolute risk reduction, the authors write.

Few RCTs to date have had sufficient power to demonstrate an effect for screening on all-cause mortality, while the rapidly evolving screening landscape (eg 3D mammography, liquid cytology) means uncertainty over efficacy, even once a program is implemented on sound evidentiary footing, the authors argue.

In addition, improvements at the treatment and prevention end — for example, implementation of HPV vaccination — mean the benefits of screening seen in original trials are now likely to be overstated, and new RCTs are needed, they add.

Reflecting on traditional methods — “induce feelings of fear and vulnerability, then offer hope by framing screening as a simple method of protection” — the authors say screening is not only now uncritically accepted by the public, but normalised as the ‘right thing to do’, even if your doctor recommends against it.

Looking ahead, they advocate an informed/shared choice model, where both benefits (overestimated) and harms (underestimated) are discussed. Tips for having these discussions, as supported by evidence, include:

The authors also stress that, contrary to fears, encouraging greater stake by patients in clinical decisions — including in regards to screening — had been demonstrated to significantly improve outcomes for disadvantaged groups. The role of emotion in these decisions and debates is noted, as are challenges for clinicians in having such conversations one-on-one.

It’s not a cancer screening piece, but we love this analysis from Becky Freeman, Josephine Chau and Seema Mihrshahi on the unintended health benefits of Pokemon Go, which exploded onto city streets worldwide in 2o16.

The secret of its success, muse Freeman and colleagues, is that instead of focusing on behaviour change, these changes are a byproduct of the game’s true goal — catching ’em all. Where public health and the commercial fitness sector have failed to see progress, pop culture has gained an unintended foothold, with important lessons (and opportunities) for health promotion:

Public health should turn its focus to developing mobile-based interventions within a framework that embraces pleasure, rewards, participation and community.

The authors urge public health to forge new partnerships with developers and others working in this space, and to up their game in seizing opportunities, noting that fast food giants were quick to capitalise on the Pokemon Go phenomenon to market consumption of junk:

“Public health agencies need to be just as nimble and responsive, or forever be creating games that nobody plays.”