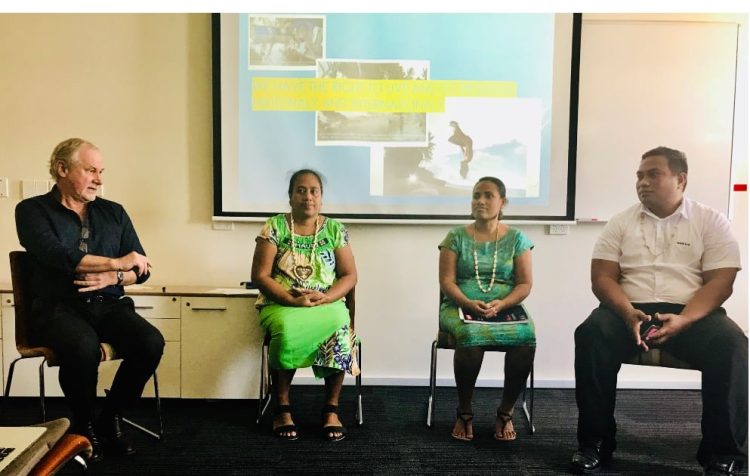 As climate change hits home in Kiribati, leaders ask, “What do you care about?”

Introduction by Croakey: What do we care about? Looking at what dominates the news headlines in this country; what’s shared on social media and discussed on morning television, I sometimes wonder.

An earlier post at Croakey flagged a recent proposal to radically change the way decisions about environmental issues are made in Australia, and the post below underscores the urgency of this, because our actions, or lack of them, have global consequences.

Three delegates from the southwest Pacific nation of Kiribati recently spoke at a Practical Justice Initiatives event at the University of NSW. Their experiences of the very real consequences of climate change are something every Australian should care about.

On 8 March 2018, Kiribati leaders Tebataua Karotu, Rakentai Momoe Teumauma and Moritio Baraniko presented their stories of climate justice, resilience and leadership to an audience gathered by UNSW’s Practical Justice Initiative and the Pacific Calling Partnership of the Edmund Rice Centre.

Kiribati (pronounced “Kiribass”) is an ocean state and coral atoll island nation in the central Pacific Ocean under threat from climate change. The country comprises 33 islands. Most of the land is less than 3 metres above sea level and vulnerable to sea level rise. Indeed villages on the island of Abaiang have already been forced to relocate.

Along with five other I-Kiribati (people of Kiribati) leaders, Tebataua, Rakentai and Moritio were in Australia for a resilient leaders’ programme as part of an Australian Award Fellowship funded by the Australian Government and coordinated by the Pacific Calling Partnership of the Edmund Rice Centre.

Climate change is a matter of survival

“Climate change is not about moving people to a safer place. That won’t stop the issue. It is about the people. We love our culture, we don’t want to move”

Education Officer at the Kiribati Ministry of Education, Rakentai Teumauma, has observed significant impacts on Kiribati education from climate change. As an example, she shared her July 2016 observations of Ribono Primary School, where the damaged classrooms prevented classes taking place.

“The loss of land poses a great danger to Kiribati livelihood, culture, identity and sovereignty,” explained Teumauma. She spoke about the impacts of rising sea levels which along with king tides and storm swells, damage school buildings and other infrastructure such as bridges as well as destroying coconut trees, a traditional building material. Teumauma related how seawater pollutes the fresh water, and temperature increases make living conditions uncomfortable.

The Ministry of Education has implemented several initiatives to protect the schools and communities, such as the WASH programme (Water, Sanitation and Hygiene), waste management, climate change curriculum, coastal conservation and management, organic gardening and measures to address coastal erosion. Teumauma declared, “the future of Kiribati and its children is seriously challenged and threatened by climate change”. Finishing with a poem to her granddaughter, she asserted, “Our culture, our identity, our heritage are critically important”.

What do you care about?

KiriCAN is a climate action network that seeks to raise awareness of and address climate change through the actions of I-Kiribati. KiriCAN collaborates with government, private sector, non-government organisations (NGOs), and not for profit organisations, with over 40 registered NGOs that each deliver adaptation activities and programs. National and international partnerships are critical for KiriCAN’s success, including with donors, humanitarian development agencies and universities.

Karotu emphasised the gravity of Kiribati’s situation by referring to Anote Tong who has stressed – “we are running out of time…”. KiriCAN has campaigned throughout Australia, New Zealand, the United States and Europe and attended Climate Change talks at the United Nations. According to Karotu, the 350 campaign – named after 350 parts per million, the safe concentration of carbon dioxide in the atmosphere recognised in the Paris Agreement – “is our lifeline and is very serious for us”. 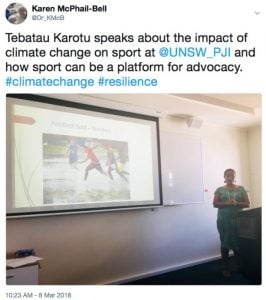 As a National Olympic Committee employee, Karotu says climate change also impacts sports in Kiribati because training and sporting spaces are vulnerable to destruction by rising sea levels and flooding. Despite these challenges and Kiribati’s economic vulnerability, Kiribati athletes have competed in every Summer Olympics since the country first participated in 2004.

David Katoatua, an international weight lifting champion, uses his sport as a platform by dancing after each lift to draw attention to Kiribati and the dangers it faces. Like Katoatua, I-Kiribati continue to repeat their message all over the world. “Climate change is a matter of our survival, and we need action now,” said Karotu. Asking the audience again as to what they care about, Karotu said “As a mother of 4 children, I care about them. I am responsible to save their land, their livelihoods and future”.

“It is unacceptable for people of Kiribati to lose their land”

“We are connected with land; land is precious for us in Kiribati,” said Moritio Baraniko, Education Officer for Kiribati junior secondary schools. He demonstrated the impact of climate change upon their land using an image of their Maneaba surrounded by water. “The Maneaba is culturally important; it is where decisions are made and a place of refuge”. Baraniko’s example made clear the harmful impact of climate change upon on his village’s identity, culture, self-determination and connection to land.

“Climate change has multiple effects” declared Baraniko. He referred to their restricted access to fresh water caused by the now 2-year drought, and groundwater spoiling by rising sea levels and severe storms. These conditions also affect agriculture and subsistence fishing, which in turn contribute to food insecurity in Kiribati.

Baraniko pointed to evidence of Australia’s significant contribution to carbon emissions per capital – a stark contrast to Kiribati’s minimal contribution to the greenhouse gases that so severely impact their lives. 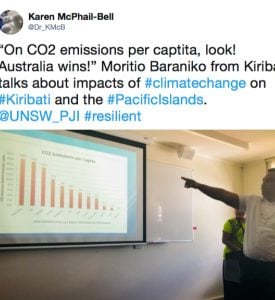 Nevertheless, Baraniko believes in I-Kiribati and Australians to make change for climate justice. “350 goes back to the Paris Agreement,” which Australia signed, he reminded the audience. “Australians should lobby their government and political leaders”.

The I-Kiribati response to these numerous challenges is testimony to their resilience and leadership. In the face of adversity, I-Kiribati and their institutions adapt. Yet, with limited resources they want help from countries like Australia.

“Open your doors, so we have free access. Go for clean energy,” implored Baraniko, “The answer is in your hands Australia.”

Acknowledgements: We thank Moritio Baraniko, Tebataua Karotu and Rakentai Momoe Teumauma for sharing their stories with the University of NSW Practical Justice Initiative forum. Thanks to Jeremy Moss (Co-Director of the UNSW Practical Justice Initiative), Joanna Holcombe and Ann Whitelaw of the University of NSW. Also, thanks to Maria Tiimon, Jill Finnane and Phil Glendenning of Edmund Rice Centre and Jack Frawley of the National Centre for Cultural Competence, The University of Sydney who obtained the Australian Award Fellowship funding. 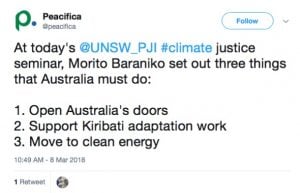 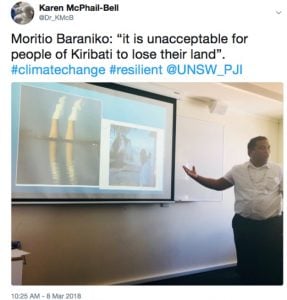 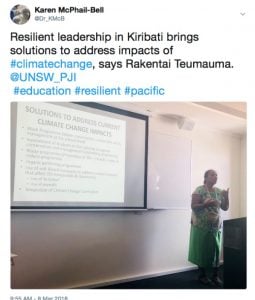 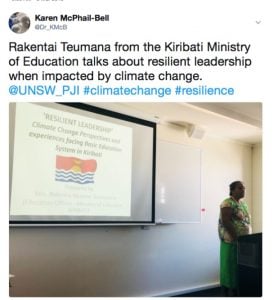 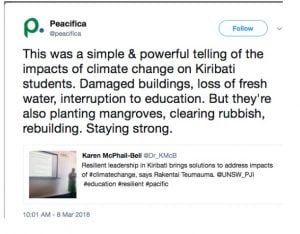 *Darryl Cronin is an Indigenous research fellow at the Practical Justice Initiative, Faculty of Arts & Social Sciences, University of New South Wales. His research focuses on constitutionalism, democracy and justice for Indigenous people. He has over 20 years of experience working in Indigenous rights, justice and development. Karen McPhail-Bell is a critical public health researcher, practitioner and educator whose interest lies in the operation of power in relation to people’s health. She is Vice President of AHPA NSW, Associate Editor of Health Promotion Journal of Australia, and Honorary Research Fellow, Poche Centre for Indigenous Health, The University of Sydney. On Twitter @Dr_KMcB.

PrevPreviousThe planet’s health is no place for politics, and new laws for Australia might just make it so
NextDo we deserve good cities? Then we need more than roads, rail & busesNext