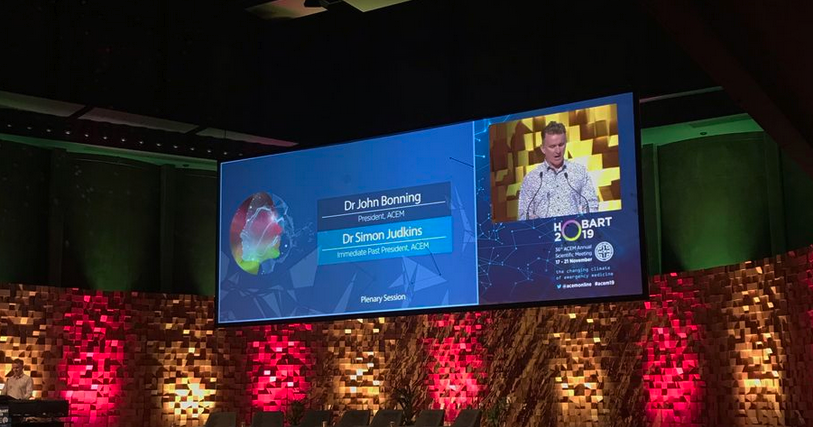 Introduction by Croakey: Climate change is striking harder and more rapidly than expected, according to the World Economic Forum’s Global Risks Report 2020.

For the first time in the survey’s 10-year outlook, the top five global risks in terms of likelihood are all environmental, and include:

The report, released this week ahead of the World Economic Forum in Davos next week, identifies “economic confrontations” and “domestic political polarisation” as significant short-term risks in 2020, and warns that geopolitical turbulence and the retreat from multilateralism threatens everyone’s ability to tackle shared, critical global risks.

US President Donald Trump, who is pulling out of the 2015 Paris climate agreement, German Chancellor Angela Merkel, EU Commission President Ursula von der Leyen and Swedish climate activist Greta Thunberg are reportedly among those due to attend the 21-24 January event.

Global concerns about failures in climate mitigation and adaptation are also being raised locally by health and medical leaders, including the newly-elected president of the Australasian College for Emergency Medicine, Dr John Bonning, according to Amy Coopes.

Below is her final report for the Croakey Conference News Service from the College’s recent annual scientific meeting.

As millions of Australians grapple with the effects of hazardous smoke arising from unprecedented bushfires, emergency doctors have renewed their calls for urgent action on the climate crisis and a national strategy on climate health and wellbeing.

Dr John Bonning, newly-elected president of the Australasian College for Emergency Medicine, said the bushfire crisis had highlighted significant gaps in Australia’s preparedness for and national leadership on climate change.

“Hospital emergency departments and emergency doctors are at the forefront of treating the impacts from these catastrophic bushfires, and the situation will continue to worsen unless urgent action is taken on the population health emergency that climate change represents,” Bonning told Croakey this week.

“While the efforts from emergency responders, agencies and communities are deserving of admiration, the crisis has highlighted the lack of a coordinated national strategy, and federal leadership on climate change and associated health impacts.”

Some of Australia’s most prominent emergency physicians, including immediate past president of the College Dr Simon Judkins, published an open letter to Prime Minister Scott Morrison this week calling for him to declare a national emergency, acknowledge the link between the fires and climate change, and expedite emissions reduction strategies as a matter of priority.

Speaking “with the authority of those at the forefront of the health crisis caused by the climate emergency”, the signatories said many of their departments had been “overwhelmed” by casualties of the bushfire crisis “and this is just the beginning”.

“We care for those suffering the health consequences of this emergency: those sickened by smoke and is consequent respiratory and cardiac conditions, those affected by heat and the myriad of health complications that it brings, by trauma and by burns, and by the exhaustion and mental illnesses that are an inextricable part of our worsening environmental conditions,” the letter states.

“We are seeing levels of suffering that risk becoming a permanent reality for the people of Australia.”

There is no chance of containing this crisis or mitigating future catastrophes without the government’s acceptance and ownership of the causes of this disaster. To move forwards Australia can no longer refuse our responsibility for these disasters…

The evidence is clear and irrefutable, and is now disastrously tangible. Inaction on this climate emergency is inexcusable. Health is a human right. We are on track to forfeit that right without urgent action.”

Bonning, who is the first New Zealand president in ACEM’s 36-year history and is based at Waikato, said he supported the letter’s sentiments.

“The evidence tells us that extreme climate events such as the current crisis will become more common and pronounced due to climate change, and the pressures on our EDs and communities compounded as a result,” he said.

“Climate action will remain a key priority for ACEM in 2020 and beyond, and we will continue to call for a concerted, coordinated emergency response.”

At its annual scientific meeting in November, ACEM declared a climate emergency and held a protest march through the streets of Hobart. It has since joined other medical bodies in calling for a National Strategy on Climate Health and Wellbeing and declaring the ongoing smoke pollution a public health emergency.

ACEM issued a statement in December revealing that, for one major metropolitan hospital in Sydney alone, cardiorespiratory presentations had increased by more than 30 percent in the first nine days of the month compared with the same period last year. Two deaths have so far been publicly linked to the smoke pollution, but projections suggest there will be hundreds more.

Vulnerable populations including the elderly, children, and socially and economically marginalised groups would disproportionately feel the effects, the ACEM statement said.

Judkins, who has been part of the frontline medical response in the south coast fire zone, repeated his calls for governments to track and publicly report on the impact of the fires in terms of injury, morbidity and mortality, something that has so far been resisted at both state and federal level.

In an interview with Croakey at last year’s ASM, the mountain-biking and loud shirt-loving Bonning said he wanted equity, diversity and sustainability to be the hallmarks of his presidency, with a major focus on the last.

“Sustainability is probably my number one thing that I want to stand for,” he said.

“Climate change is a public health and population emergency… and it has a real impact on particularly marginalised populations,” he said.

“The number I have heard is 250,000 extra deaths between 2030 and 2050 directly related to climate change, and for every death obviously there will be significant casualties.”

“So we need to be aware of the issue, look at the significant weather events and their impact on our ability to deliver health care: increased number of cyclones and severity of cyclones that hits the Pacific nations, the fires that are occurring here made worse by climate change threatening hospitals, there’s going to be significantly more presentations to emergency departments and we want to advocate for more resources.” 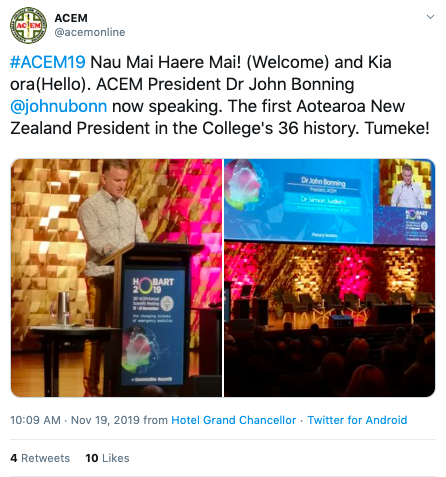 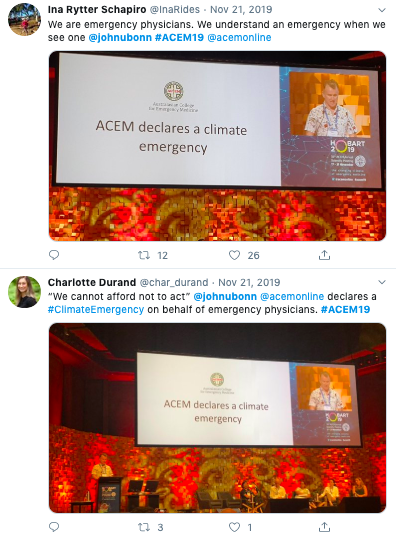 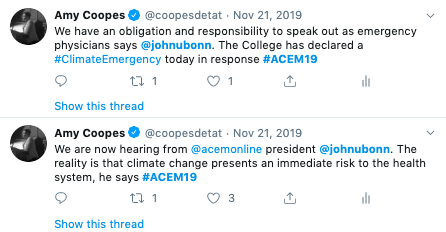 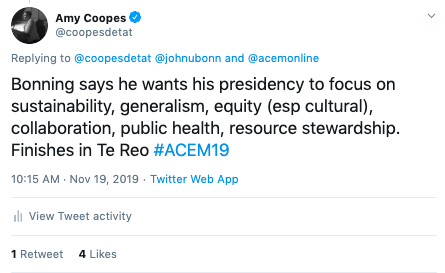 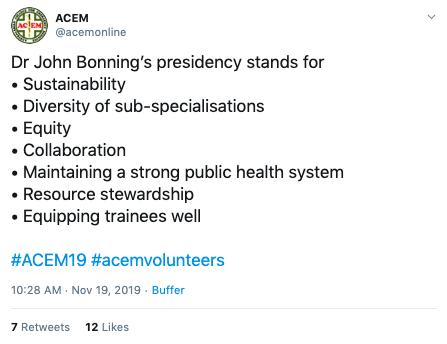 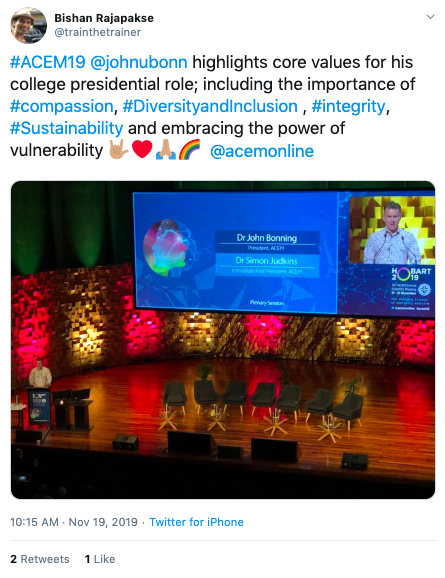 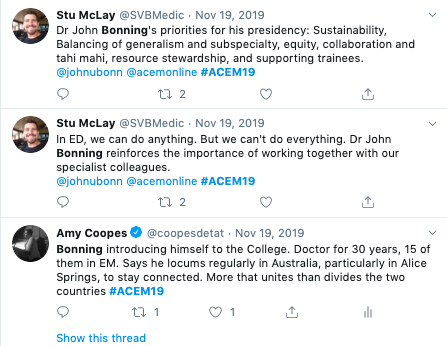 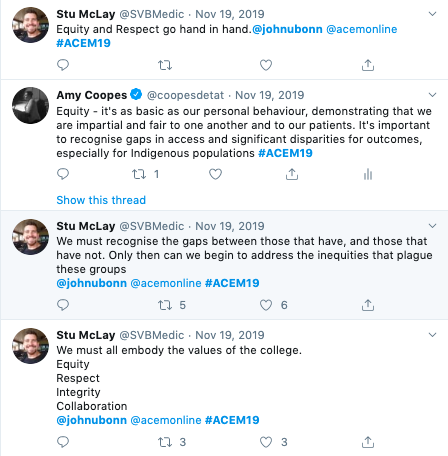 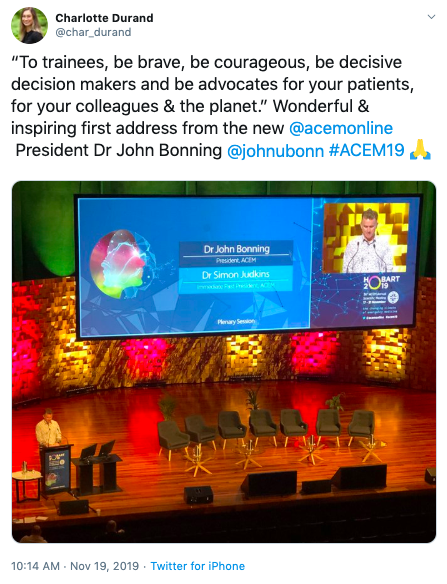 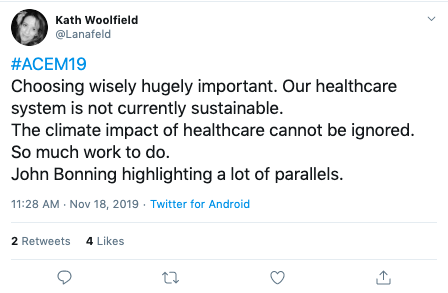 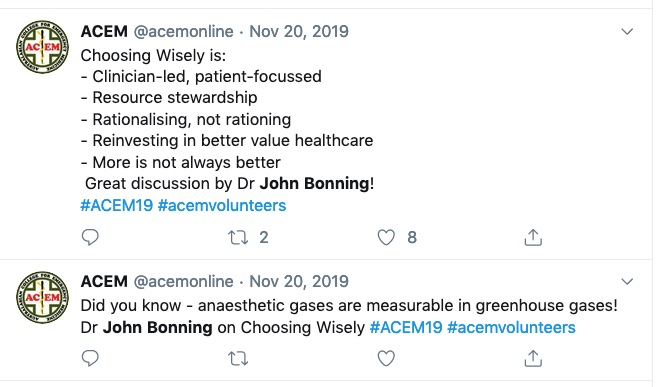 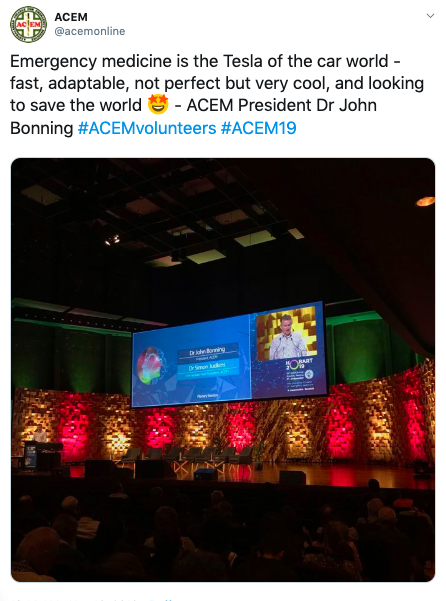 See this playlist with seven video interviews from the conference.

During the conference, Amy Coopes made a total of 21 broadcasts, including interviews, climate march and plenary/workshop sessions. As of 17 January 2020, there had been 3,465 views via Periscope for the seven interviews, and 1,769 views for other broadcasts.

According to Symplur analytics, between 13 November and 10 December, 1,543 Twitter accounts participated in the #ACEM19 discussions, sending a total of 10,187 tweets, and creating 66.8 million Twitter impressions. 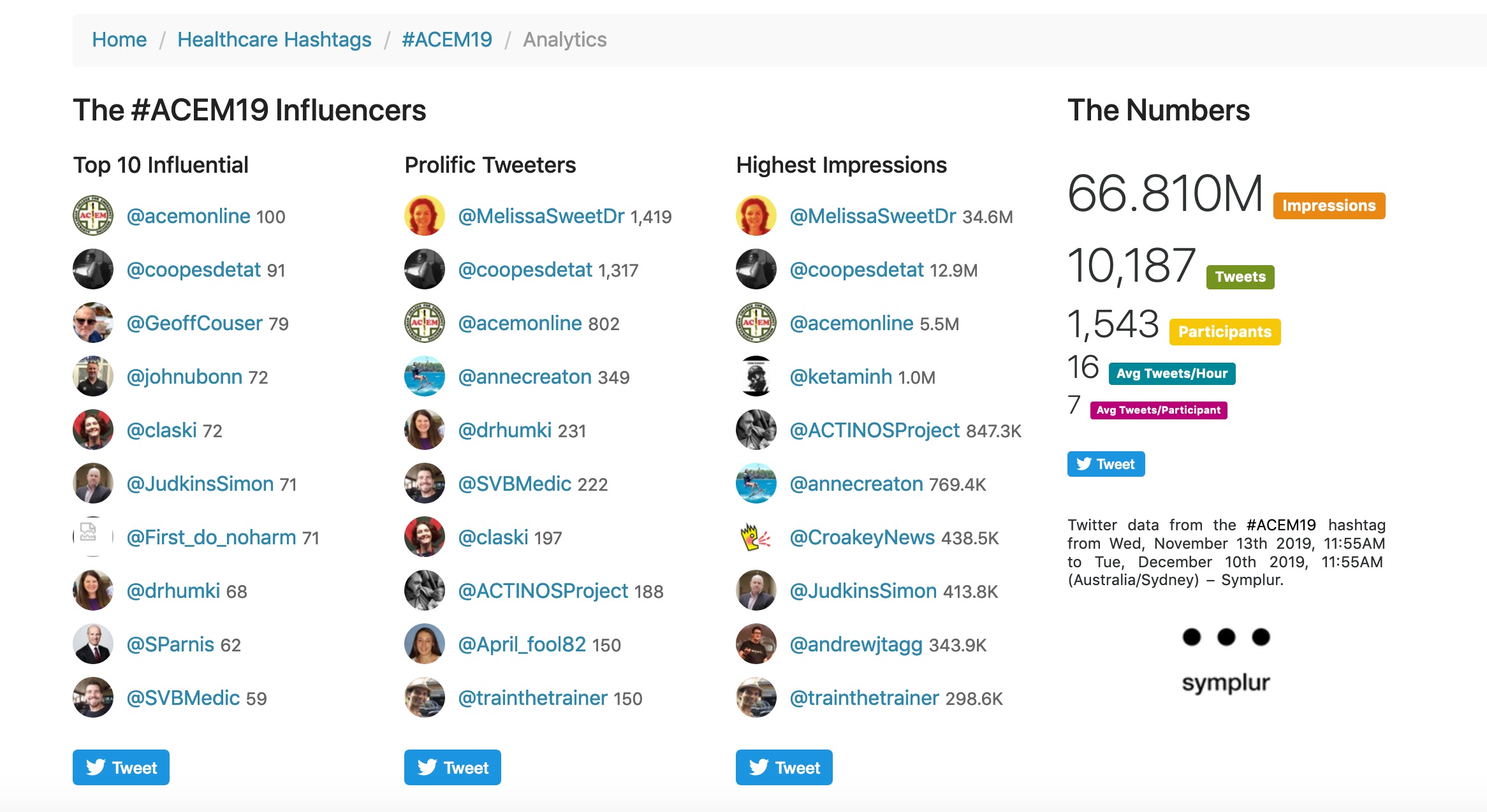 The 2019 ACEM ASM was held in Hobart from November 17-21, and Amy Coopes covered it for the Croakey Conference News Service. This is the final story in our coverage of #ACEM19, which can be tracked at this link. Read our coverage of ACEM ASM coverage from 2017 and 2018 here and here.