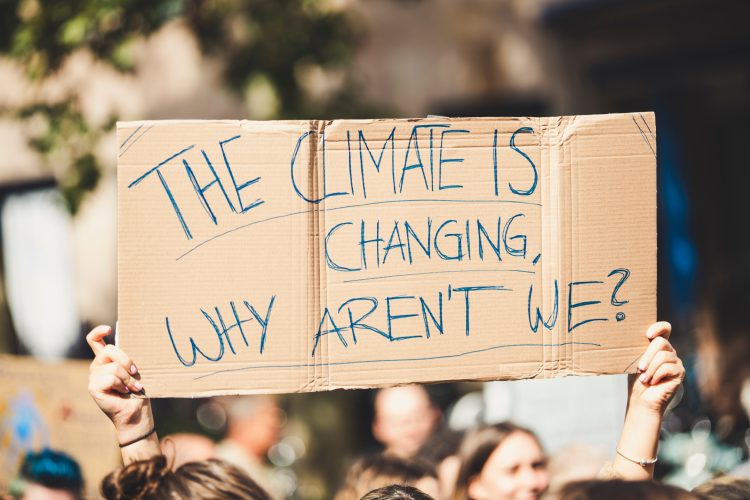 In this wide-ranging wrap of the latest news on the climate crisis and health, Dr Amy Coopes reports on a new survey of Australian healthcare workers, a tool for healthcare institutions to assess their greenhouse gas footprint, the carbon footprint of cataract surgery, and an urgent call for global action by more than 200 of the world’s leading health and medical journals.

The climate emergency is already impacting Australian health services and staff and there is a hunger for action, according to a new survey of healthcare workers demonstrating deep concern about and awareness of the crisis but uncertainty about how to best respond at the personal, professional or political level.

The Climate and Health Alliance’s Real, Urgent & Now (RUN) survey, published this week, showed high levels of awareness of and concern about climate change (one in four respondents), with a similar proportion describing the crisis as already having a moderate to severe impact on public health and more than half reporting an impact to health services and infrastructure. Physicians, public health and health promotion professionals, nurses, midwives and medical students were represented in the 875-person survey cohort.

Respondents detailed a range of climate-related health impacts observed in their patients including heat stress (58 percent), mental illness (54 percent), respiratory illness from pollution (52 percent), bodily harm from bushfires (51 percent), as well as the sequelae of drought (41 percent) and storms and flooding (24 percent).

Most people surveyed (greater than four in five) expected such impacts to accelerate over the coming decade, with disproportionate impacts on disadvantaged groups including Indigenous populations, people living in rural and remote areas, those in poor quality housing, the elderly and people with chronic conditions.

More than half (56 percent) said their healthcare service or institution had been adversely affected by extreme weather events in the past 12 months, most commonly bushfires (27 percent) or bushfire smoke (39 percent), heatwaves (32 percent), storms (21 percent) and flooding (13 percent).

These impacts ranged from increased demand and access disruptions through to power outages, asset destruction or damage, and staff illness and absence. 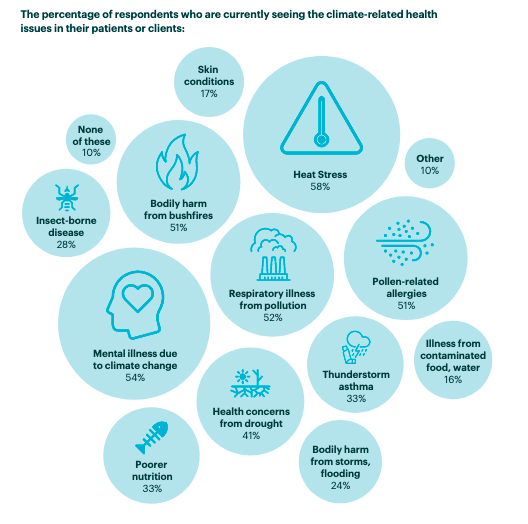 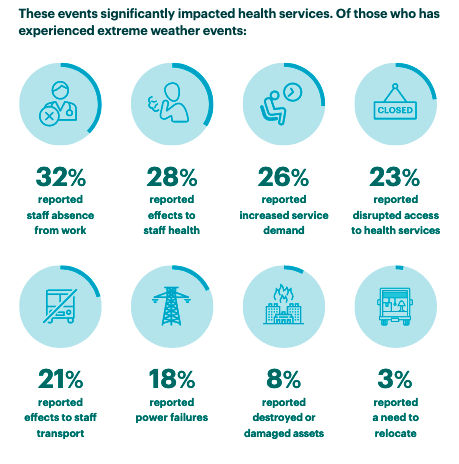 An overwhelming majority (80 percent) felt the health sector should be advocating for policy action at all levels, and taking direct steps to reduce its own emissions, with almost as many (around one in four) calling for health services to divest from fossil fuels and provide training to health professionals on climate change.

A similar proportion (80 percent) also felt health professionals had a duty to inform the public and policymakers (78 percent) about the health risks of the climate crisis, but only a quarter felt comfortable in doing so and just one in three is currently having these conversations. Many (42 percent) said this was because they didn’t feel well-enough informed or did not feel supported by their organisation to do so (32 percent). 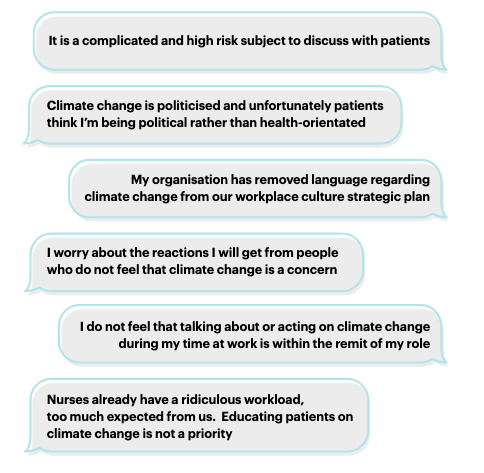 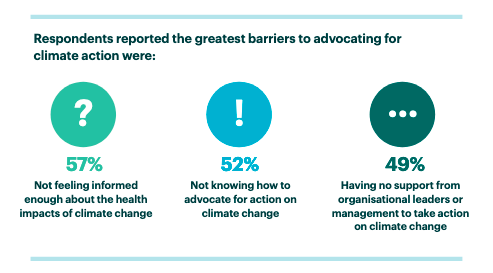 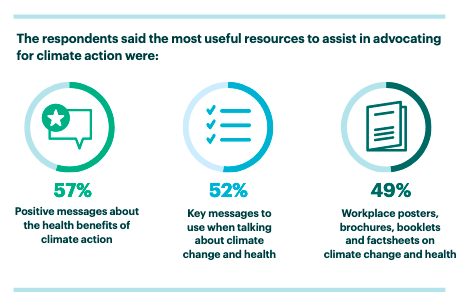 It is timely, then, to see Global Green and Healthy Hospitals publish a Climate Impact Checkup Calculator allowing healthcare institutions to assess their greenhouse gas footprint.

The calculator considers emissions from a range of sources including stationary and mobile combustion, waste treatment on and offsite, fugitive anaesthetic, medicinal and cooling gases, as well as from purchased electricity, business, employee and patient travel, losses from electricity transmission and distribution, and inhalers.

A study into the carbon footprint of cataract surgery in the New Zealand capital Wellington was published last week in the New Zealand Medical Journal. It estimated that the procedure, of which there are some 30,000 performed nationally each year, produced around 4,500 tonnes of CO2 equivalent annually, emissions requiring 134 hectares of forest to absorb.

A single case produced the equivalent emissions of 62 litres of petrol or a one-hour economy flight.

The vast majority came from disposable surgical supplies – gowns and gloves, tubing, medications, gauze and dressings, with secondary impacts from patients and staff commuting to the procedure.

“Each operation produces a full rubbish bag weighing 1.3kg on average. The problem is the consumption of such large quantities of disposable single-use supplies. While reducing waste is important, reducing consumption has the most impact on emissions,” explained Jesse Gale, one of the paper’s authors.

He contrasted the NZ experience with that of India, where much of the waste is recycled, surgical instruments are sterilised and reused, and the equivalent CO2e is just six kilograms per case, without any compromise on safety or quality.

“There is a strong appetite among surgeons for hospitals to move to more sustainable and less wasteful surgical practices. A recent survey in the USA found many of the re-use and recycling practices of India would be acceptable to surgeons, if quality and safety were maintained,” said Gale.

Also timely for healthcare workers and services looking for tangible priority targets, this compendium from the World Health Organization and other UN agencies (UNDP, UNEP and UNICEF) outlines 500 actions aimed at reducing death and disease from environmental causes.

The “living repository”, a first edition PDF of which you can access here, presents recommendations and actions across a range of environmental risk factors to health including air pollution, unsafe water, sanitation and hygiene and climate and ecosystem change. 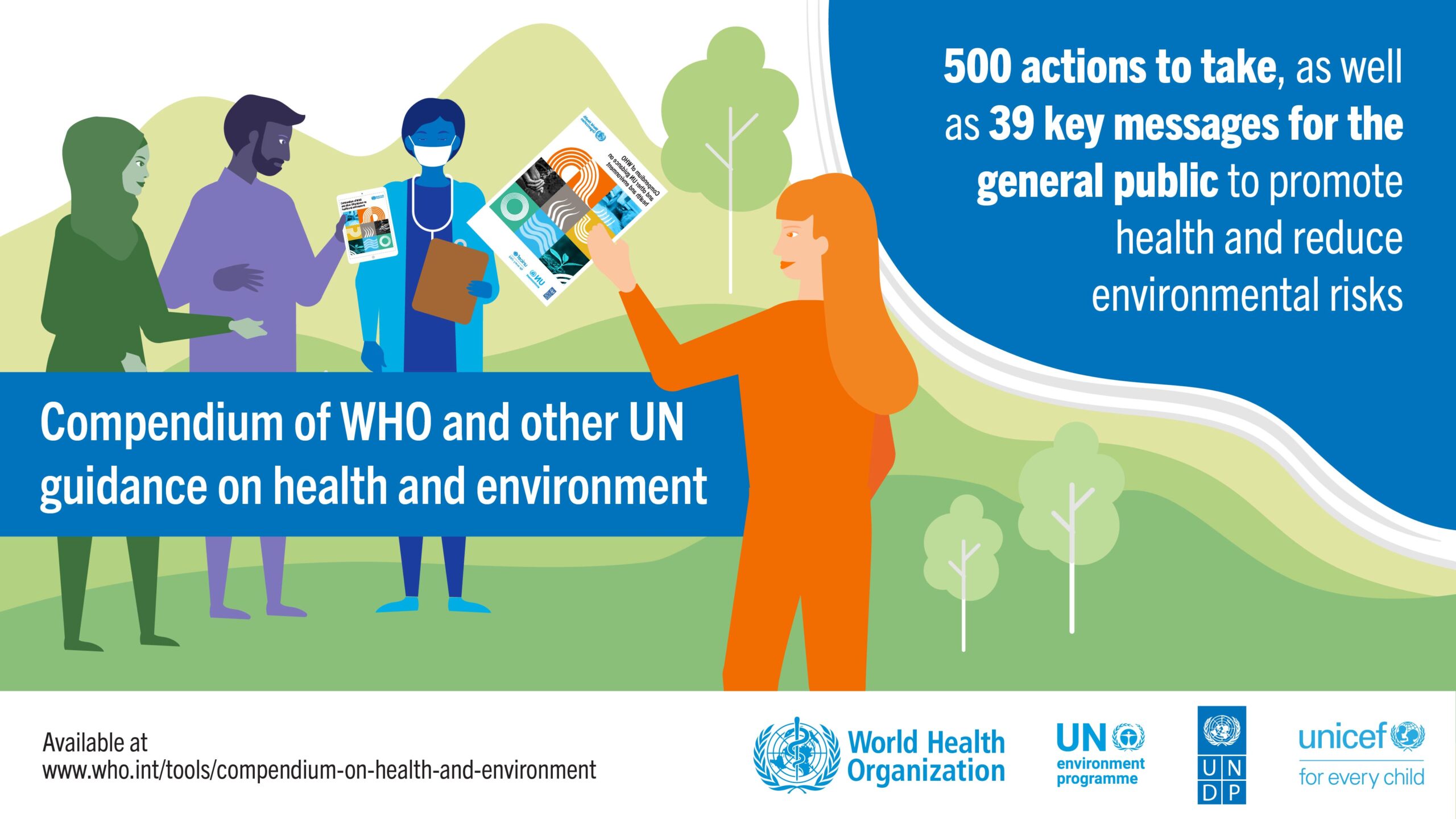 Implementing the actions in the compendium should be part of a healthy and green recovery from the COVID pandemic and beyond, and is essential to attaining the Sustainable Development Goals. The UN is uniting its health and environment expertise to support countries in this endeavour.”

This systematic review on the health co-benefits of urban climate change adaptation makes for interesting reading in this space, highlighting infrastructure measures and nature-based solutions as having the most potential.

Also issuing a five-point plan for action last week was Botanic Gardens Conservation International, which launched the State of the World’s Trees Report, highlighting that one third of global tree species are at risk of extinction – twice the number of threatened mammals, birds, amphibians and reptiles combined. This includes 440 species with fewer than 50 specimens remaining.

The report warns that climate change and extreme weather are an emerging additional risk. For example, it finds that 180 species per day are directly threatened by severe weather events and sea level rise.

Yet Australia’s Environment Minister Sussan Ley signed off on another coal project, resolutely overlooking a recent Federal Court ruling that she owed the nation’s young people a duty of care on climate.

In an unprecedented act of unity, more than 200 of the world’s leading health journals, including the New England Journal of Medicine, the BMJ and the Lancet, published a joint editorial demanding urgent action from world leaders at the upcoming COP26 summit in Glasgow to limit global warming, “halt the destruction of nature, and protect health”.

Health is already being harmed by global temperature increases and the destruction of the natural world, a state of affairs health professionals have been bringing attention to for decades. The science is unequivocal; a global increase of 1.5°C above the pre-industrial average and the continued loss of biodiversity risk catastrophic harm to health that will be impossible to reverse. Despite the world’s necessary preoccupation with COVID-19, we cannot wait for the pandemic to pass to rapidly reduce emissions…

The editorial calls for equity to be at the centre of the global response, with it incumbent upon wealthier countries to act more rapidly and aggressively, and says it will require “fundamental changes to how our societies and economies are organised and how we live”.

“Governments must intervene to support the redesign of transport systems, cities, production and distribution of food, markets for financial investments, health systems, and much more,” it reads. “Global coordination is needed to ensure that the rush for cleaner technologies does not come at the cost of more environmental destruction and human exploitation.”

The greatest threat to global public health is the continued failure of world leaders to keep the global temperature rise below 1.5°C and to restore nature. Urgent, society-wide changes must be made and will lead to a fairer and healthier world.

We, as editors of health journals, call for governments and other leaders to act, marking 2021 as the year that the world finally changes course.”