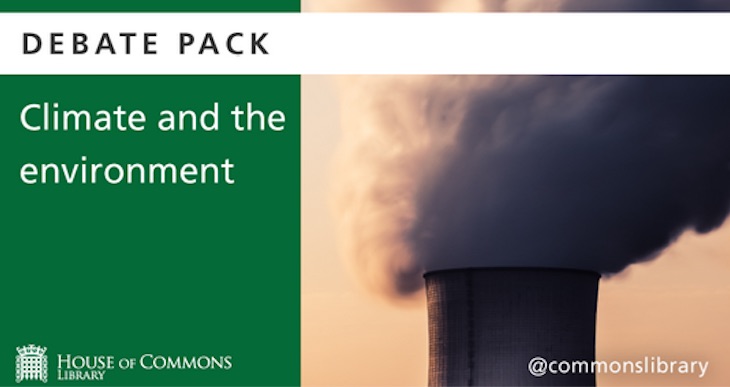 From the UK House of Commons library: briefing for an environment and climate emergency declaration

Introduction by Croakey: The Climate and Health Alliance has released an election scorecard giving a grim assessment of the major parties’ performance on climate and health.

The LNP receive a big F – just as the Climate Council rated them in a new report this week – scoring zero out of eight, while Labor barely scrapes a pass, scoring 4.5 out of eight. The Greens got top marks (8/8).

The scorecard assesses the parties’ policies on their commitment to: emissions reduction targets recommended by the national Climate Change Authority; 100 percent renewable energy by 2030; supporting a sustainable and climate-resilient healthcare sector; an economy-wide carbon price; a national moratorium on new coal or gas; a just transition for fossil fuel workers; strong air pollution laws, as well as the national strategy. 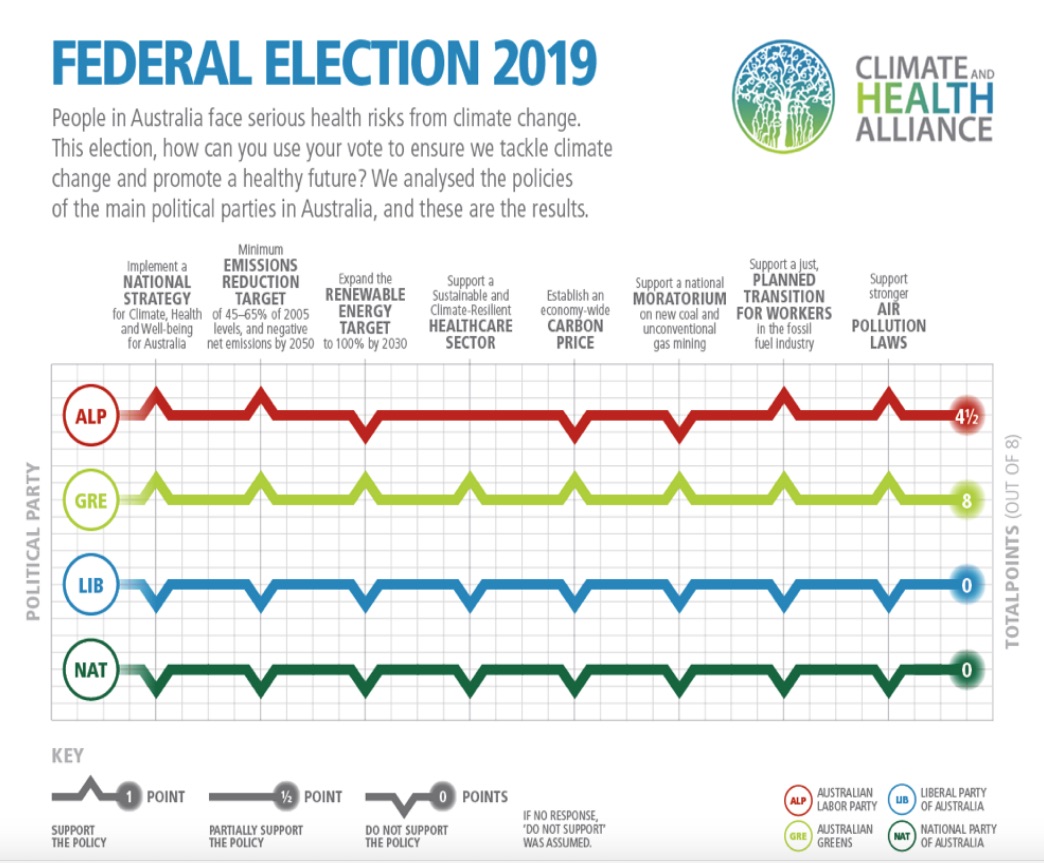 While Australia’s political powerbrokers may be failing to act on climate change as a public health emergency, there is growing movement internationally to declare a climate emergency.

Also on 1 May, the British Labour party moved a non-binding motion in the House of Commons to declare ‘an environment and climate emergency’, which was passed by members of the Parliament across the floor.

The Climate Emergency Declaration and Mobilisation campaign tracks climate emergency declarations and says governments that have declared a climate emergency are responsible for more than 43 million citizens in four English-speaking countries and Switzerland.

The campaign says that in Australia, 17 local governments have declared a climate emergency, and that more than 75 candidates in the federal election have signed the Climate Emergency Declaration petition. The Australian councils represent just over a million people – four per cent of the population.

Meanwhile, Chris Turney, Professor of Earth Science and Climate Change at the University of New South Wales, says that in Australia we seem to be caught in a debate surrounding the costs of action rather than inaction.

“At a time when politicians discuss the need to ‘live within our means’ when it comes to national finances, this does not appear to translate to the environment when we’re considering future generations,” he writes in the article below, first published by The Conversation.

On Wednesday night a bipartisan UK Parliament passed an extraordinary measure: a national declaration of an Environment and Climate Emergency.

The UK is the first national government to declare such an emergency. The decision marks a renewed sense of urgency in tackling climate change, following a visit to Parliament by teenage activist Greta Thunberg , the broadcast of David Attenborough’s documentary Climate Change: The Facts and 11 days of protest by environmental group Extinction Rebellion that paralysed parts of London.

There are now some 49 million people living under national, city and local declarations of a climate emergency around the world.

What is a climate emergency?

While there is no precise definition of what constitutes action to meet such an emergency, the move has been likened to putting the country on a “war footing”, with climate and the environment at the very centre of all government policy, rather than being on the fringe of political decisions.

The UK are legally committed to a 80% reduction in carbon emissions by 2050 (relative to their 1990 levels) and was recently recognised as one of just 18 developed economies that have driven down carbon dioxide emissions over the last decade.

Some city and local councils have set out their climate emergency policies to become carbon zero by 2030 built around renewable energy supplies, more energy-efficient housing and a host of other measures. Yesterday’s decision in Parliament implies further national reductions and investment in this space.

The year 2030 is an important target. In spite of what climate contrarians might voice very loudly, five of our planet’s warmest years on record have occurred since 2010, whilst 2018 experienced all manner of climate extremes that broke numerous global records.

It’s sobering to realise that, because the oceans are a major sink of heat, the estimated 40-year delay in the release of this energy back into the atmosphere means the conditions of the last decade are in part a consequence of our pollution from the 1970s.

With the planet to experience further warming from the heat held by the oceans, there is increasing international focus on meeting the United Nation’s Paris Agreement which was signed by 197 countries in 2016. This ground-breaking agreement has the ambitious global aim of preventing global temperatures from reaching 2˚C above pre-industrial levels (the late nineteenth century) by 2100, and ideally should be no more than 1.5˚C.

A report by the Intergovernmental Panel on Climate Change (the IPCC) has suggested that meeting this target means annual global carbon emissions must effectively halve between now and 2030, and then fall to zero by 2050. This is a target the UK opposition party Labour are now calling for.

The cost of inaction

Research in Australia has investigated the cost to the global economy if the Paris Agreement is not met and the world hits 4˚C warmer.

The values are eye-watering: an estimated US$23 trillion a year over the long-term. This has been likened to the world experiencing four to six global financial crises on the scale of 2008 every year.

In Australia, the cost would be on the order of A$159 billion a year, with most of the losses caused by drought-driven collapses in agricultural productivity and sea level rise. The expense to each Australian household has been put at the order of A$14,000.

The declaration of climate emergency by the UK comes at a crucial time in Australia, just two weeks out from a federal election. While the major parties have made public statements of support for the Paris Agreement, it remains unclear whether current and former leaders are fully aware of their obligations.

Read more: Climate change forced these Fijian communities to move – and with 80 more at risk, here’s what they learned

At a time when politicians discuss the need to “live within our means” when it comes to national finances, this does not appear to translate to the environment when we’re considering future generations.

Instead we seem to be caught in a debate surrounding the costs of action rather than inaction. The next generation of Australian voters certainly don’t seem confident about political commitments to their future as they hold their third national school strike tomorrow.

The welcome announcement from the UK is a major step in the right direction and potentially a watershed moment for a more sustainable global future. Is it too much to hope Australia could follow next?

• Chris Turney is Professor of Earth Science and Climate Change at the University of New South Wales.

PrevPreviousNew report from Equally Well Symposium – download your free copy
NextUranium mines harm Indigenous people – so why have we approved a new one?Next