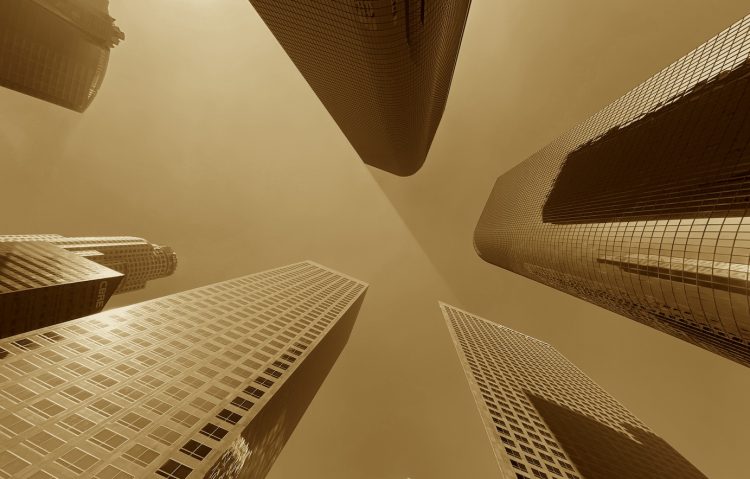 Addressing the commercial determinants of health. Photo by Dave Simbosa on Unsplash

As corporate forces undermine our health, here’s a handy tool for mapping their harmful activities and identifying solutions

Introduction by Croakey: The UK Government’s recent mini-budget, which included tax cuts that will benefit the wealthy and is expected to further worsen health inequalities (sound familiar, Australia?), has prompted calls for the health and medical sector to engage more proactively in interrogating the political and commercial determinants of health.

Dr Nason Maani, a lecturer in Inequalities and Global Health Policy at the University of Edinburgh, and Martin McKee, Professor of European Public Health at the London School of Hygiene and Tropical Medicine, say the commercial determinants of health contributed significantly to the inequality that left the UK vulnerable to the effects of the COVID pandemic and the current energy crisis.

“If we were facing an instance of environmental contamination, then we would expect not only to bear witness to the effects on those exposed, but also the source of the contamination so that it might be halted. Population health is fundamentally shaped by political decisions and commercial power, and the principle remains the same,” they write in the BMJ this week.

“Be it in the context of this mini-budget, COVID-19, or the climate crisis, we are in the era of the commercial determinants of health. The question is, will we rise to the challenge?”

The commercial determinants of health were also a strong focus at the recent Population Health Congress (see a selection of tweets at the end of this post), and in the article below, public health researchers Dr Julia Anaf and Professor Fran Baum report on a critical tool for mapping harmful corporate activities.

Their findings highlight the health costs of Carlton and United Breweries, and the authors suggest the commercial determinants of health can be tackled by “more equitable corporate tax rates, strengthening international agreements to close loopholes on tax havens, restricting political lobbying and political donations which potentially undermine the democratic process, and preventing the use of voluntary codes which are used to stymie public health legislation”.

Increasing attention is being paid globally to the commercial determinants of health, and new ways of studying the impacts of business on health are being developed.

It is well known that transnational corporations (TNCs) have a significant impact on health. Examples are through the marketing and sale of unhealthy ultra-processed foods, alcohol, and fossil fuels.

They also influence governments through their lobbying activities, and the ways in which their labour force is treated also has a significant impact on health.

Given the size of the TNCs, it has proved hard to consider their health impact. This is why we developed a corporate health impact assessment (CHIA) framework to apply to particular TNCs: ‘Assessing the health impact of transnational corporations: its importance and a framework’.

‘Assessing the health impacts of an alcohol corporation, Carlton and United Breweries (CUB) in Australia’ is the third CHIA that we have undertaken on key TNCs across different industry sectors.

We chose CUB for our latest research as it is a high-profile Australian alcohol company which is owned by a large transnational corporation, Asahi Group Holdings.

Our research used document analysis including corporate literature, media analysis, and 12 semi-structured interviews with academics, civil society actors and policy actors. These participants were selected for their expertise on the nature and practices of the alcohol industry in Australia, and their understanding of current government regulations. Our invitations to CUB and the wider alcohol sector to engage were declined.

We also estimated the alcohol attributable fractions and burdens of death due to congestive heart disease, diabetes mellitus, stroke, breast cancer, bowel cancer and injury in Australia. For example, in 2010, 2.6 alcohol-related fatal injuries per 100,000 were specifically due to beer, of which CUB contributed 1.2 deaths. Our paper provides additional statistics on other related deaths.

We found that CUB had both positive and negative impacts on health. For example, CUB engages in a range of business practices which can benefit the community, including by setting sustainability goals, through their employment opportunities, positive aspects identified in relation to work health and safety, and from forms of corporate philanthropy, such as ‘Doctors and nurses given helping hand during COVID-19 crisis’.

Voluntary codes have little accountability, and instead rely on reactive reputation management. Political donations and lobbying, either directly or indirectly through affiliated industry bodies, were other practices we found that can potentially influence alcohol regulation in ways that have negative impacts on population health.

The negative health impacts we found are common to all alcohol industries, including from fetal alcohol spectrum disorder and violence and aggression which disproportionately affect First Nations people and populations in disadvantaged circumstances, contributing to increasing health inequities.

The cost of dealing with alcohol-related negative individual and societal impacts are externalised to governments. These include suicide, increased disease risk, crime, violence, road accidents, healthcare costs, reduced productivity, and costs for child protection and domestic and family violence services which are mainly externalised to the public purse.

The total externalities are estimated to be A$36 billion per annum; costs that could otherwise become investments in health and social welfare.

Corporate health impact assessment is vital as it can be used by a corporation to improve its operations, by civil society actors to inform and strengthen their advocacy, and by governments to identify where they need to strengthen regulatory frameworks to support population health ahead of corporate profits.

Our research reveals that the alcohol industry offers some benefits, but that these are won at the expense of significant harms.

Our research also has clear implications for policy. These include the need for more equitable corporate tax rates, strengthening international agreements to close loopholes on tax havens, restricting political lobbying and political donations which potentially undermine the democratic process, and preventing the use of voluntary codes which are used to stymie public health legislation.

We are keen to see stronger advocacy for strengthened regulation of alcohol products, advertising, sponsorship, and political engagement. Governments need to hold alcohol companies accountable for the individual and social harms caused by their products and operations, and in doing so reverse the externalisation of costs from the alcohol sector to the public purse.

• Dr Julia Anaf is a Research Fellow at Stretton Health Equity in the Stretton Institute at the University of Adelaide. Her main research interest is the ways in which transnational corporations act as commercial determinants of health. She has co-authored three book chapters and is lead author on seven peer reviewed articles concerning the health impacts of transnational corporations, including civil society responses.

• Professor Fran Baum AO is a public health social scientist with a special interest in creating healthy, equitable and sustainable societies. She is Professor of Health Equity, The Stretton Institute, The University of Adelaide, Australia.

The Population Health Congress also put the spotlight on the commercial determinants of health. 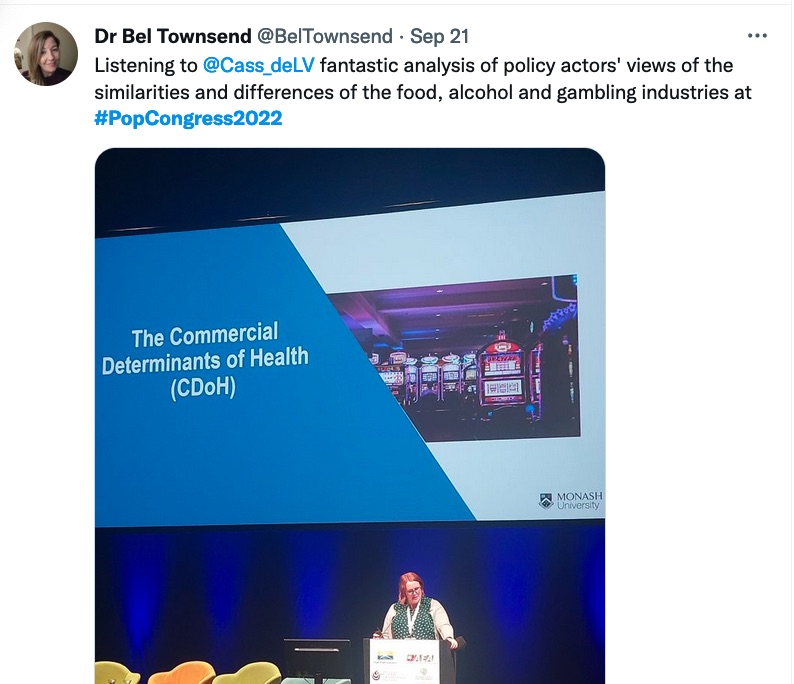 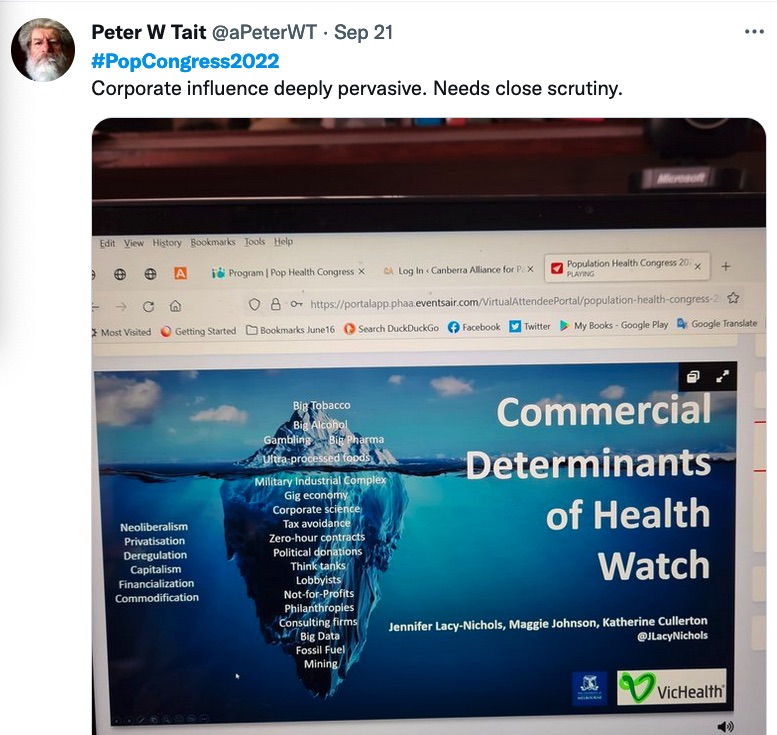 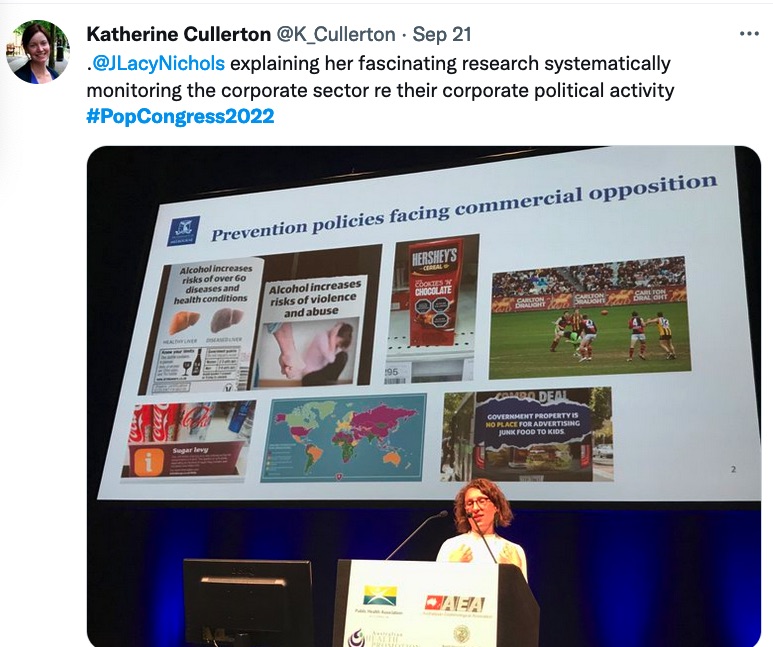 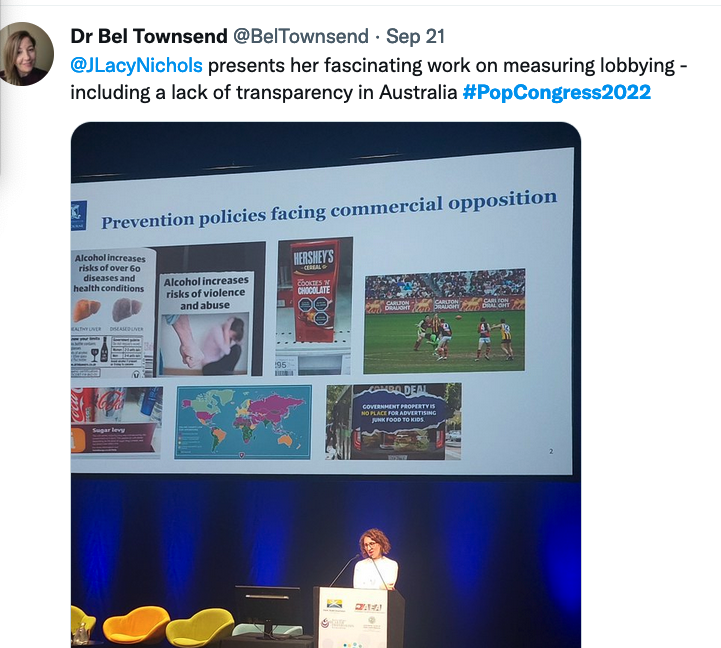 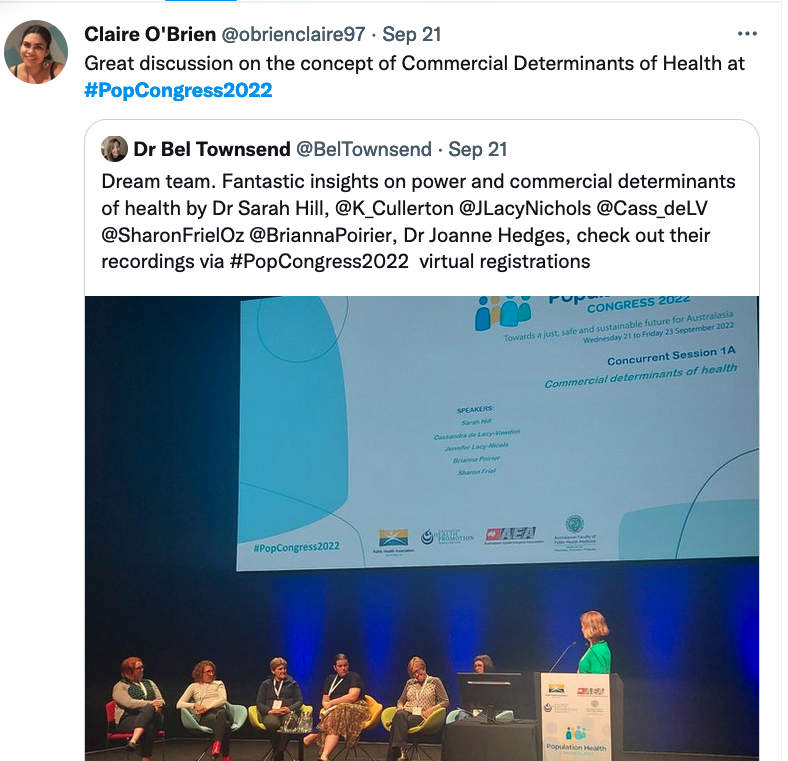 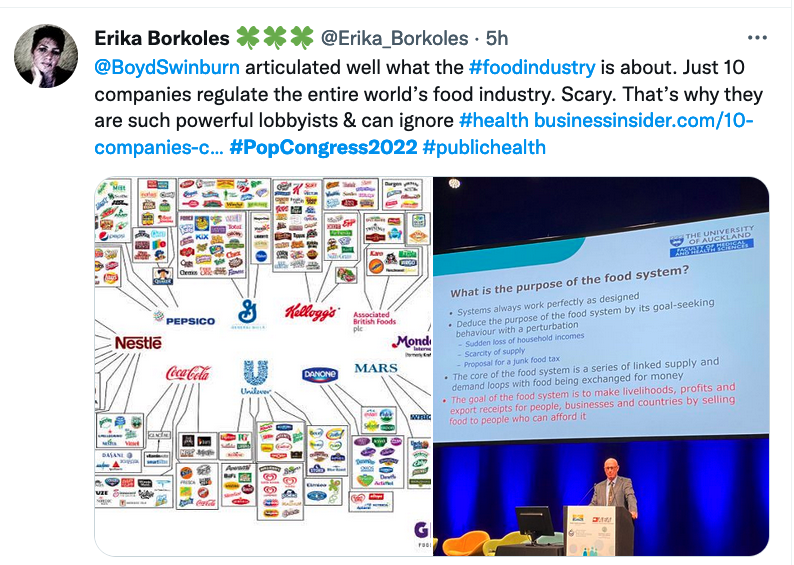 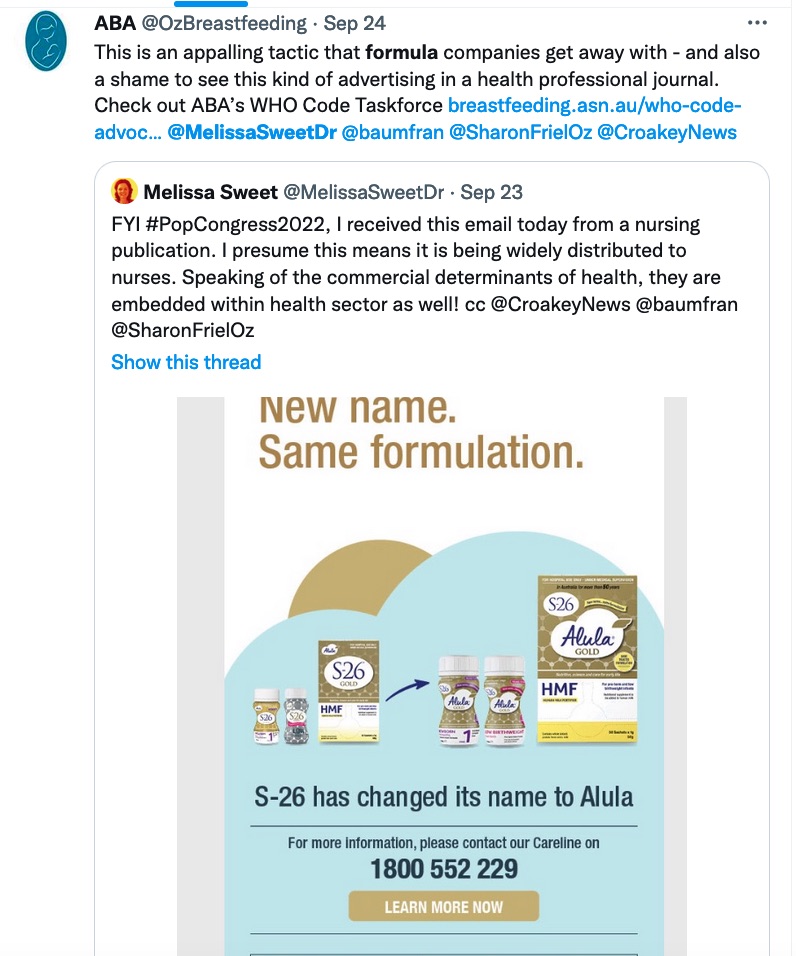