Register to join this free event, from 3pm AEDT on Wednesday, 4 November

As COVID explodes in the United States, join us on 4 November to track critical election results

As the Trump Administration claims to have ended the COVID pandemic while also suggesting that containment is no longer possible, more than 44,000 people in the United States are now in hospitals with the illness – up from 28,600 just over a month ago.

Meanwhile, it’s been estimated that 1,718 healthcare workers in the US (including at least 213 registered nurses) had died of COVID-19 and related complications by 16 September, with a large nursing union saying this is likely to be a conservative estimate.

A report from the National Nurses United, titled Sins of Omission: How Government Failures to Track Covid-19 Data Have Led to More Than 1,700 Health Care Worker Deaths and Jeopardize Public Health, says healthcare workers’ rights have been systematically violated during the pandemic.

The report slams the US healthcare industry for sweeping these deaths under the rug, saying there is “widespread resistance” to providing information on healthcare worker fatalities:

Comprehensive disclosure and transparency with respect to COVID-related health care worker deaths have been all too rare. These deaths frequently have been met with silence or outright denials.

If hospitals are not widely required to publicly disclose their deaths and infection rates, they lack important incentives not to become zones of infection.

We cannot allow the more than 1,700 deaths, many of them avoidable, to be swept under the rug, and vanished from our collective memory by the health care industry.”

As previously reported and illustrated in the tweets below, the 3 November election is of profound importance for health, both within the US and globally. 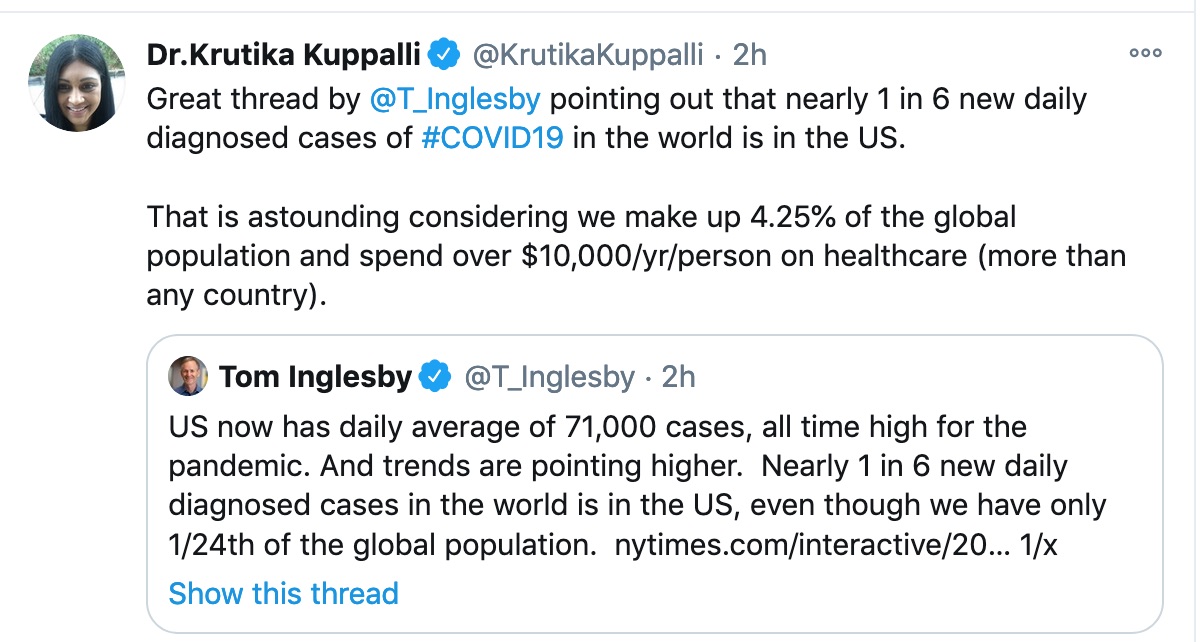 Read the article from Politico. 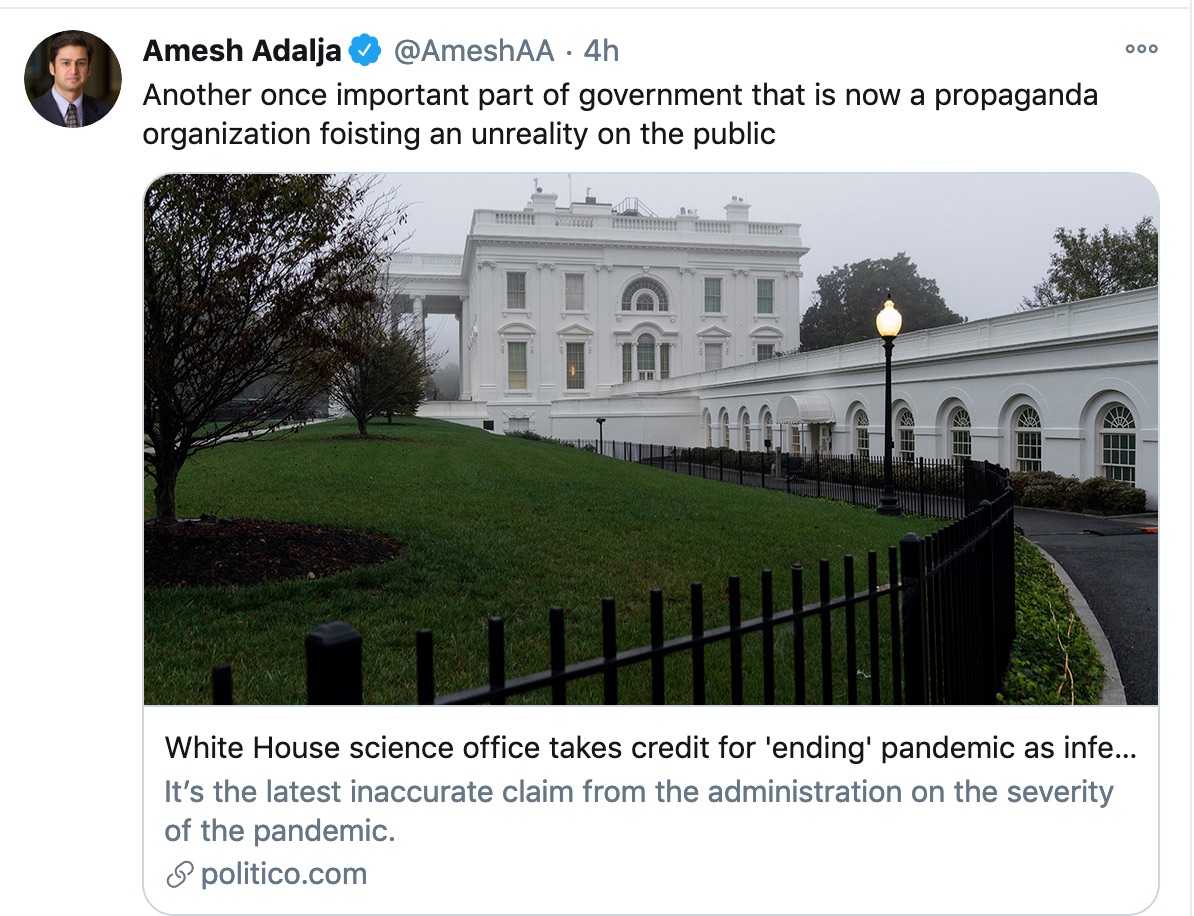 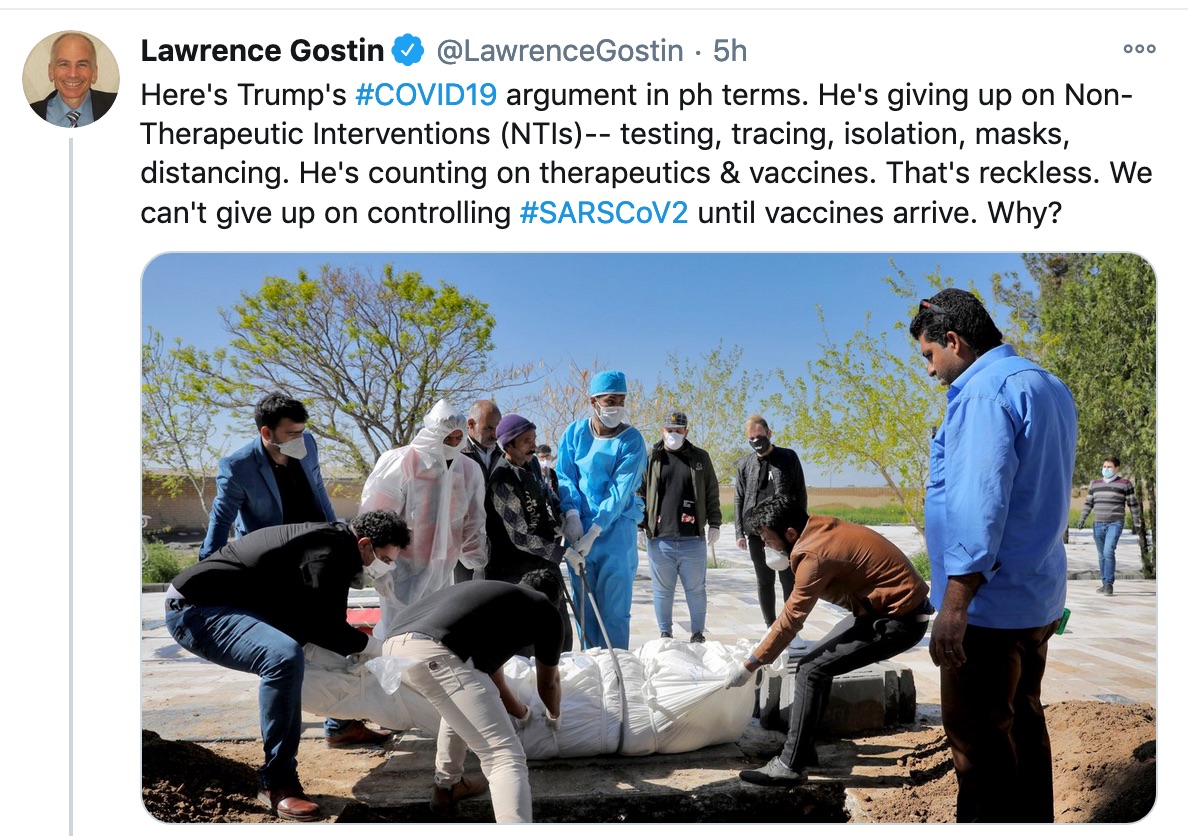 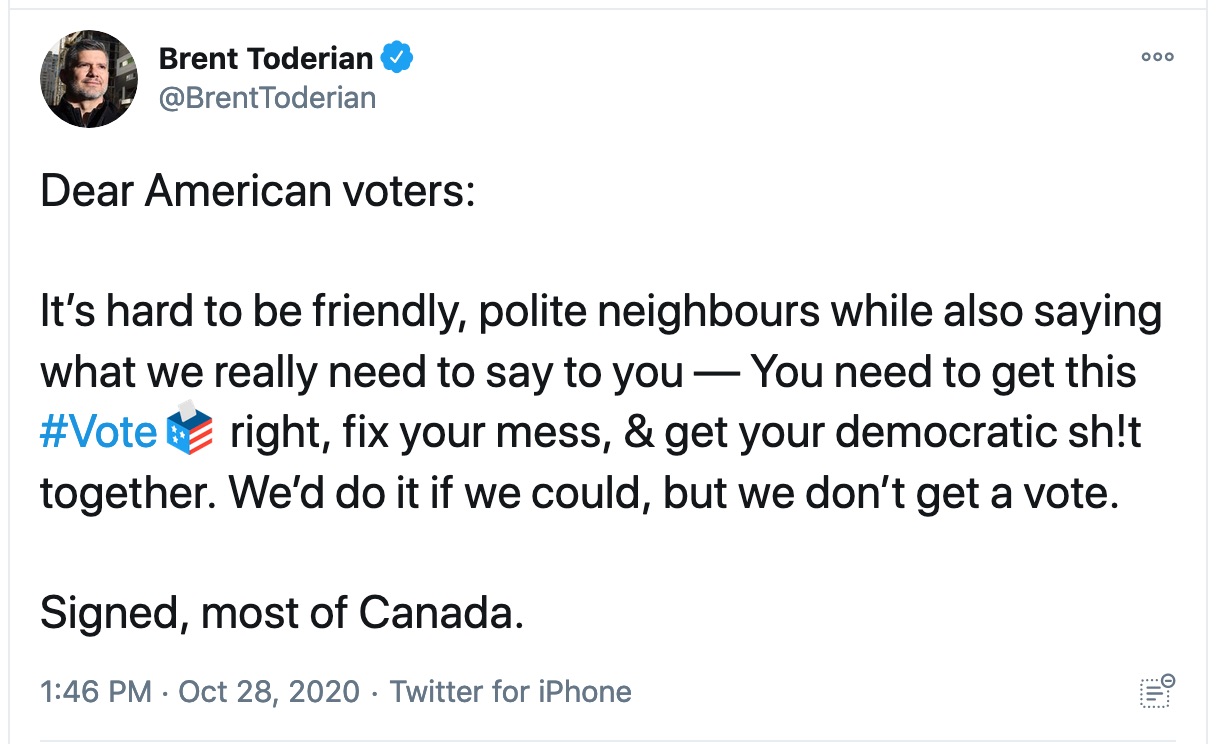 Register here to join experts in discussion on the US election, during a #CroakeyLIVE event from 3pm AEDT on 4 November.

It will be moderated by Croakey contributing editor Associate Professor Lesley Russell and James Blackwell, a Wiradjuri man and Research Fellow (Indigenous Policy) at the Centre for Social Impact UNSW. 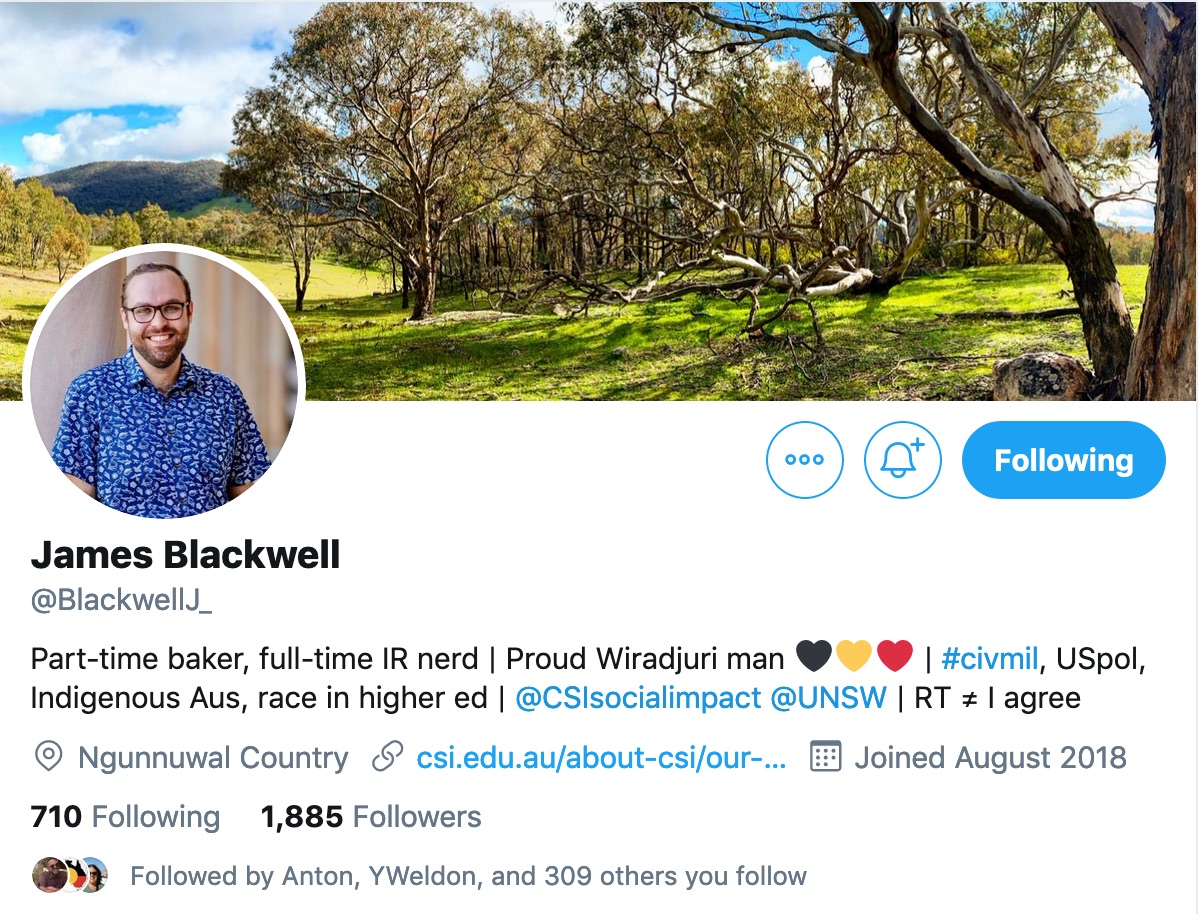 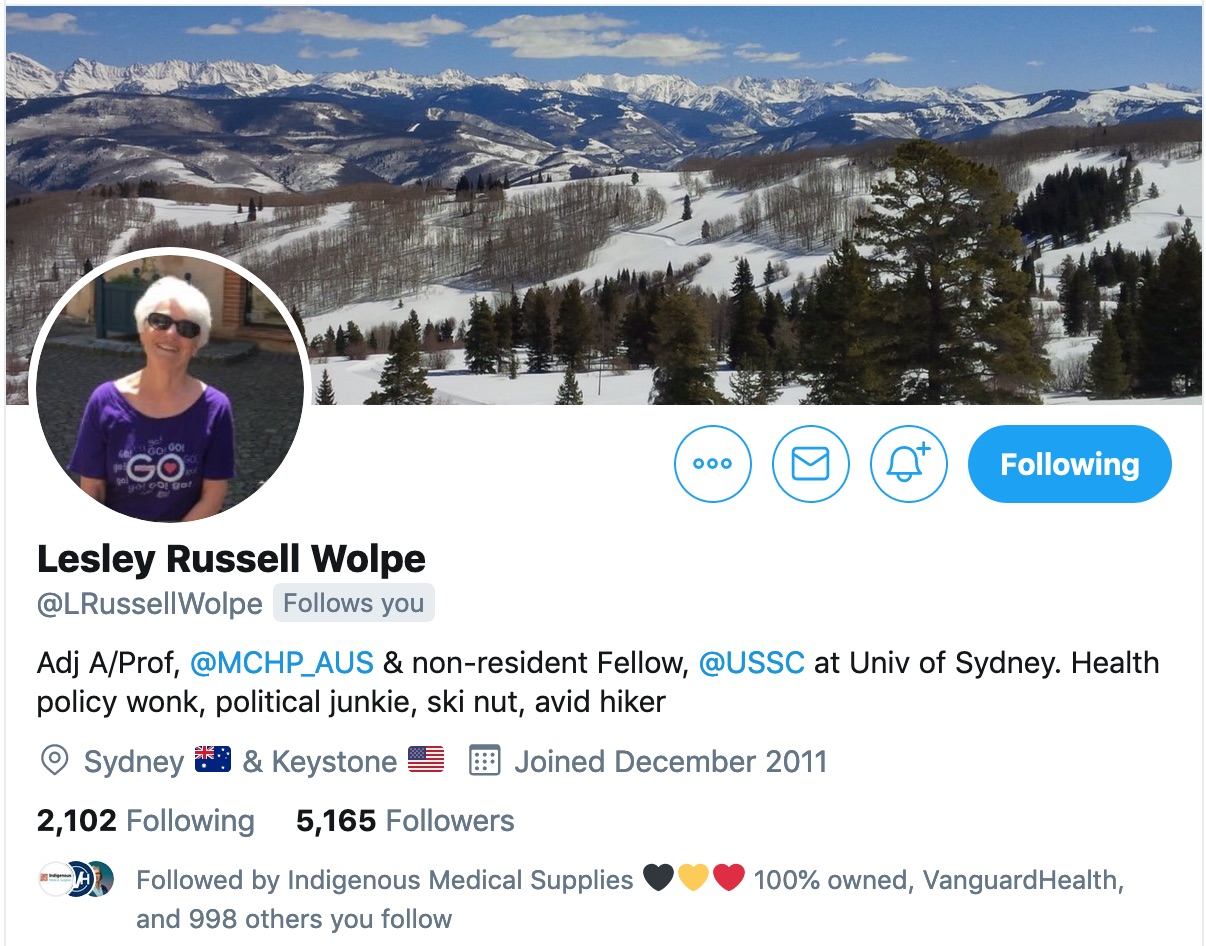 Elshaug recently moved from The University of Sydney to become Director of the Centre for Health Policy at The University of Melbourne. Since mid-2019, he has been based in Washington DC as a Visiting Fellow at the Brookings Institution, the world’s #1 ranked think tank. He also spent over three years (2010-2013) in the US under Obama’s presidency so has witnessed first-hand two very different socio-political climates in recent US history.

Leigh holds a PhD from Harvard, has worked as a fellow at the Washington DC thinktank the Progressive Policy Institute, and is a regular attendee at the Australia-America Leadership Dialogue. Since 2010, he has served as a Labor member in the House of Representatives. Andrew’s books include Randomistas: How Radical Researchers Changed Our World (Yale University Press) and Innovation + Equality: How to Create a Future That Is More Star Trek Than Terminator, with Joshua Gans (MIT Press).

Leigh is a keen runner, having run the Boston, New York and Chicago marathons, and hosts a podcast titled “The Good Life: Andrew Leigh in Conversation”, which is available on Apple Podcasts. He is the father of three sons – Sebastian, Theodore and Zachary, and lives with his wife Gweneth in Canberra. Everyone else in his household is a dual Australian-American citizen. 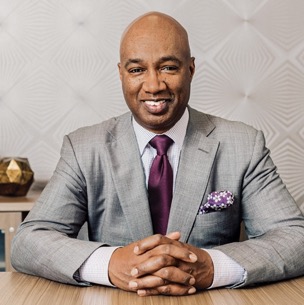 Irving is the President and CEO of the Irving Group, a consulting firm providing strategic advice and assistance to international telecommunications and information technology companies, investors, philanthropies and non-profit organisations.

Prior to founding the Irving Group in 1999, Irving served for almost seven years as Assistant Secretary of Commerce for Communications and Information and Administrator of the National Telecommunications and Information Administration (NTIA). He was one of the principal architects and advocates of the Clinton Administration’s telecommunications and Internet policies. In 2019 he was elected to the Internet Hall of Fame for his pioneering efforts identifying the “digital divide” and advocating for domestic and international policies to increase more equitable access to the Internet and related technologies. He is a regular visitor to Australia where his family has many friends and colleagues.

PrevPreviousTime to resume national conversation on the Uluru Statement that was denied to Australians
Next“When you ask the community, magic happens”: a stocktake of public health in the pandemicNext