In the US, the Center for Science in the Public Interest is urging city councils, state legislatures and Congress to consider taxing soft drinks, in the wake of Mexico’s landmark new “soda” tax.

San Francisco is reportedly heading in this direction (depending on the outcome of a ballot this month), proposing that a tax on sweetened drinks help fund health and exercise programs at city schools, recreation centres and non-profit organizations.

It will be interesting to see what – if any – policy responses are forthcoming in response to a recent National Health Performance Authority report providing the first local snapshot of overweight and obesity rates across Australia.

In the article below, Mark Metherell, communications manager for the Consumers Health Forum, argues that the report should galvanise local and national action, and suggests that Medicare Locals provide a platform for championing healthy local environments.

Is primary health care an effective platform for tackling our obesogenic environments?

Community media outlets have recently fuelled a fresh bout of anxiety about obesity. “We’re fat and stuck on fags”, declared the headlines of country newspapers across NSW and Victoria.

In Ipswich, there was the foreboding: “Reports boost fears over city’s health outlook”; in Wollongong: “Illawarra’s obesity epidemic worsens”; and in Western Australia, the ABC reported: “The fat region: almost three quarters of Goldfielders are obese of overweight.”

The trigger for the headlines was the latest National Health Performance Authority’s report on rates of smoking and obesity, detailed for each of Australia’s 61 Medicare Local areas. Figures giving a localised picture of obesity are a natural hit for local media, particularly if they stand out negatively, as was the case in many lower socio-economic and rural areas.

Australians by now should have grown accustomed to having one of the fattest populations on earth so, in one sense, the fat phenomenon is no novelty. 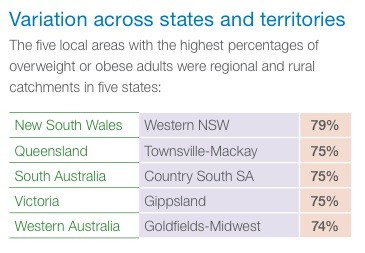 What is new is that we are now able to see how our own region rates. And the differences can be dramatic, varying from 50 per cent of adults with overweight or obesity levels in affluent areas to up to 75 per cent in lower socio economic and rural districts.

The hope is that these local snapshots of this lethal but avoidable impact on our health may be more likely to get people to sit up (or better, stand up) and do something. Rather than a national statistic that can seem to have little relevance, figures that show your community may rate above the national average for, say, obesity, are more likely to grab your attention.

It is a disturbing reality that so far, despite the barrage of reports over the past 20 years warning of Australians’ swelling waists, and numerous official efforts to get the nation exercising and eating healthy food, the overall numbers of Australians who are overweight or obese have climbed steadily.

The combination of the recently introduced Medicare Locals and the localised reports from the NHPA potentially provide a new platform to combat obesity.

Already Medicare Locals are assessing their local population’s health needs and responding with a range of schemes like: life skills for Indigenous school children in the Lower Murray; strength training and exercise for the over 50s in North Perth; oral health for seniors on the NSW Central Coast; and after hours maternal and child health nursing in south eastern Melbourne.

There are ventures that would help counter the battle of the bulge such as on the Gold Coast where the Medicare Local has helped establish up to 40 walking groups and also supports workplace walking. In Canberra there is a HeartLink program for people at risk of cardiovascular disease which offers “lifestyle change support” to reduce their risk.

These community-driven projects are revealing the potential and diversity of ways different communities can respond now they have a localised entity to focus attention and direction on prevention and health promotion efforts.

The Consumers Health Forum argues the latest obesity figures should make it clear the time for a campaign to counter obesity is now, and it needs a national and local commitment to action.

Medicare Local-type primary health care can provide the advice and support people need to lose weight. We know that the causes of overweight/obesity are numerous and complex, both national and local, ranging from the relentless promotion of unhealthy food and drinks to the reduced opportunities for routine exercise created by our dependence on the car and inadequate public transport.

The primary health care movement offers the potential to champion healthy options in local communities, not only by supporting individual consumers and families but also pushing for local developments that promote physical activity and fight the insidious spread of sedentary lifestyles.

(One of the interesting aspects of the map below is that data is missing for quite large chunks of the country). 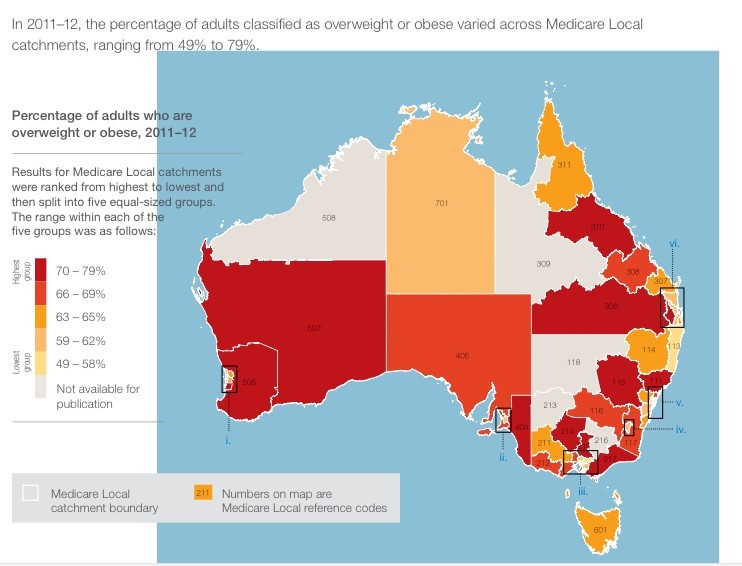 • The Prevention Institute in California has released Walk On: Strategies to Promote Walkable Communities to help public health professionals and community advocates make the case for making communities and streets walkable. It includes case studies on rural and urban communities that are making real strides (!) to encourage walking.

• This report by public health advocate Michele Simon, How McDonald’s Exploits Philanthropy and Targets Children,  investigates how McDonald’s has created “a branded charity that is an extremely valuable PR vehicle”, and suggests that McDonald’s should retire Ronald McDonald and stop marketing to children.

PrevPreviousPoliticians need to “pull their heads out of the sand”, and address the urgent public heath threat of climate change
NextMoving the health sector beyond command and control models of leadershipNext