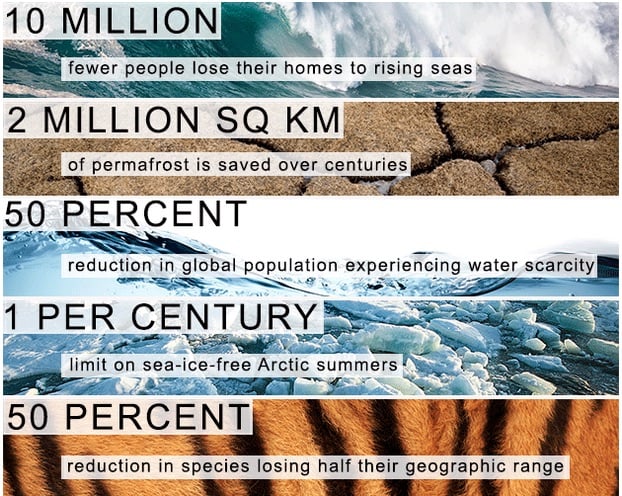 How the BBC is reporting the difference between a 1.5 and 2 degree rise.

As new IPCC report spotlights urgent need for climate action, what about Queensland’s “elephant in the room”?

Introduction by Croakey: The Intergovernmental Panel on Climate Change (IPCC) report on limiting global warming to 1.5°C, due for release on 8 October, will add to the heat on the Australia Government for its climate policy vacuum.

However, the report is an opportunity to scrutinise what all jurisdictions and sectors are – or are not – doing in this space.

(For a backgrounder on the report, see this brief from the World Metereological Organization and United Nations Environment Programme, and the feature image above is taken from this BBC report explaining the differential impacts of a 1.5°C and 2°C increase.) 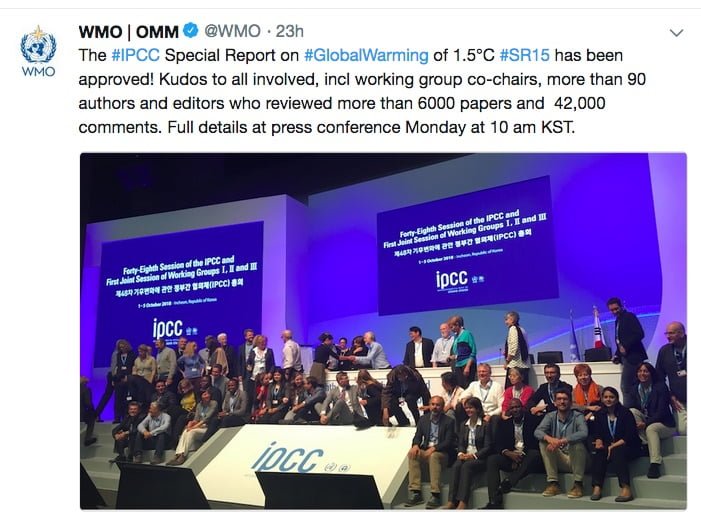 With Queensland accounting for more than one-quarter of Australia’s total greenhouse gas emissions, leading researchers say the State Government needs to be doing much more, notwithstanding its new ‘Human Health and Wellbeing Climate Change Adaptation Plan’.

The authors of the article below state:

We can’t have successful adaptation if we continue to feed the root cause of climate change. Unless Queensland says no to the Adani mine, any attempt to adapt is a futile struggle to dig ourselves out of deepening quicksand.”

Climate change is killing people and our health services cannot keep up. Recognising the growing toll that climate change is having on the population, Queensland recently launched its game-changing ‘Human Health and Wellbeing Climate Change Adaptation Plan’ (H-CAP for short). The H-CAP proposes priority adaptation measures to strengthen the provision of services to minimise the death toll from climate change.

The H-CAP just one of a suite of Queensland’s sectoral adaptation plans, with others being in agriculture, infrastructure, tourism, emergency services, business, industry and resources, and ecosystems. 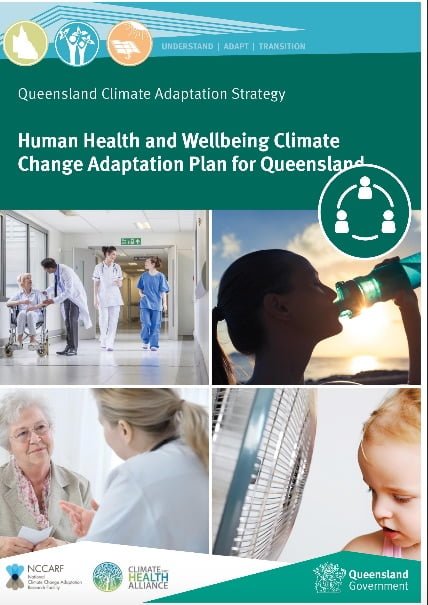 Its release puts Queensland way ahead of other Australian states, with the ACT the only other State or Territory with a comprehensive health adaptation strategy. Despite the obvious links to climate, ‘health’ still goes largely unacknowledged by in other State and Territory plans.

The H-CAP is a comprehensive, evidence-based response to a serious global problem of our own making, not the result of a ‘poetry slam night at the happy herb cafe’, as the Federal resources minister Matt Canavan suggested (paywalled article).

These are the people we trust to look after us when we are sick and vulnerable, as well as the researchers whose work underpins our understanding of disease prevention, health promotion, and provisioning of quality health care.

Services are not prepared

The message received by the authors of the H-CAP was consistent: climate change is a substantial and increasing threat to the health of people in Queensland, and services as they currently stand are not able to cope.

All in all, about 180 health professionals and experts across Queensland contributed to H-CAP, which would make for one hell of a poetry slam. The substance of the plan is clear and the evidence for action is strong; it is disappointing that even in the face of overwhelming evidence that some politicians continue to place other priorities above the health and wellbeing of their constituents.

There is, of course, room for improvement in Queensland’s plan. Despite its comprehensive assessment and recommendations, the H-CAP is tightly constrained in what it covers.

It only looks at climate adaptation by service providers and nominates priorities supporting innovation and resilience in health services, aged care facilities, and early childhood education providers. It doesn’t look at building resilience in the population at large by improving the underlying drivers and markers of health.

Yet there is so much more to protecting population health than providing care to the sick and otherwise vulnerable, and there is certainly scope for broader adaptation measures that take a more preventive approach; such as lifting levels of physical activity, improving nutrition, and minimising air pollution.

Such actions are very much needed, and build resilience in populations, not just health services. This type of approach is necessarily inter-sectoral, and therefore more complex than what the H-CAP set out to do, but Queensland’s multiple sectoral plans potentially form a scaffold for more ambitious priorities. While beyond the scope of this initial plan, a preventive approach that takes into account the established social determinants of health must be the next step in climate adaptation.

A glaring omission in the scope of the H-CAP is that it does not include strategies for mitigation, other than to support health services to reduce their own emissions. However – and this is important – the H-CAP clearly identifies that a key underlying principle for successful health adaptation in Queensland health is to limit climate change through meaningful reductions in greenhouse gas emissions across all sectors.

No matter how much money we throw at adaptation, if we don’t put the brakes on emissions we will have zero hope of keeping up with the escalating health threats posed by climate change. Reducing Queensland’s greenhouse gas emissions is particularly important because the state emits 28.3 percent of Australia’s total greenhouse gases; and Australia’s national per capita greenhouse gas emissions are among the highest in the world. That 28.3 percent figure does not take into account the burning of Queensland’s significant coal and gas exports in other countries, with vigorous plans for more coal mines and more gas wells underway.

And this is where Queensland remains entirely at policy odds with itself.

On the one hand it is working hard to adapt to climate change, but on the other it is enabling the development of a massive new coal mine that will lock us onto a dangerous global warming trajectory for several more decades. This is the Adani elephant in the room, and represents policy incongruity on a massive scale.

We can’t have successful adaptation if we continue to feed the root cause of climate change. Unless Queensland says no to the Adani mine, any attempt to adapt is a futile struggle to dig ourselves out of deepening quicksand.