Photo by Markus Spiske on Unsplash

As our planet “hurtles towards the point of no return”, who is standing up for climate justice?

Health professionals and scientists have been encouraged to consider disruptive civil disobedience as a legitimate strategy for promoting climate action, as hopes dissipate that global climate negotiations in Egypt will yield what is needed to avoid catastrophic climate change.

The call from a leading international medical journal for “provocative protest” comes as dozens of media organisations from more than 20 countries have united in publishing a joint call for an end to humanity’s fossil fuel addiction and for rich countries to do far more for climate justice.

“Rich countries account for just one in eight people in the world today but are responsible for half of greenhouse gases,” says the editorial. “These nations have a clear moral responsibility to help. Developing nations should be given enough cash to address the dangerous conditions they did little to create – especially as a global recession looms.”

The editorial calls for a windfall tax on the combined profits of the largest oil and gas companies, with the funds redistributed to poorer, vulnerable countries, as they are suffering the worst impacts of the climate crisis despite having done the least to cause it.

It says that rather than getting out of fossil fuels and into clean energy, many wealthy nations are reinvesting in oil and gas, failing to cut emissions fast enough and haggling over the aid they are prepared to send to poor countries. “All this while the planet hurtles towards the point of no return – where climate chaos becomes irreversible.” 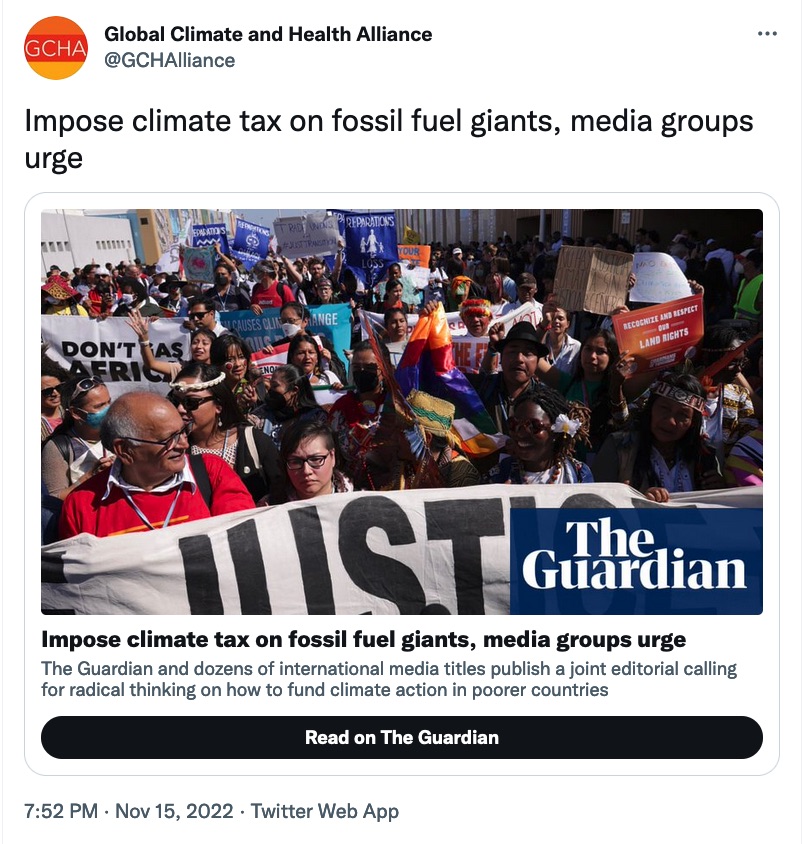 Guardian News and Media led the initiative to coincide with the COP27 meeting, which concludes on 18 November. Media organisations from almost every continent were involved, including the Hindu in India and Tempo in Indonesia, the Mail & Guardian in South Africa and Haaretz in Israel, Rolling Stone in the United States and El Espectador in Colombia, and La Repubblica in Italy and Libération in France.

“Since the Cop26 UN climate summit in Glasgow 12 months ago, countries have only promised to do one-fiftieth of what is needed to stay on track to keep temperatures within 1.5C of pre-industrial levels,” says the editorial.

“No continent has avoided extreme weather disasters this year – from floods in Pakistan to heatwaves in Europe, and from forest fires in Australia to hurricanes in the US. Given that these came about from elevated temperatures of about 1.1C, the world can expect far worse to come.” 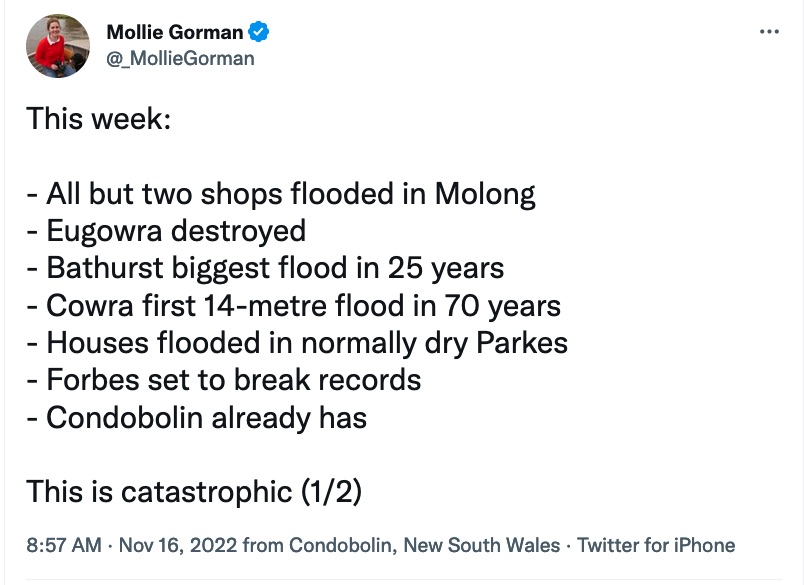 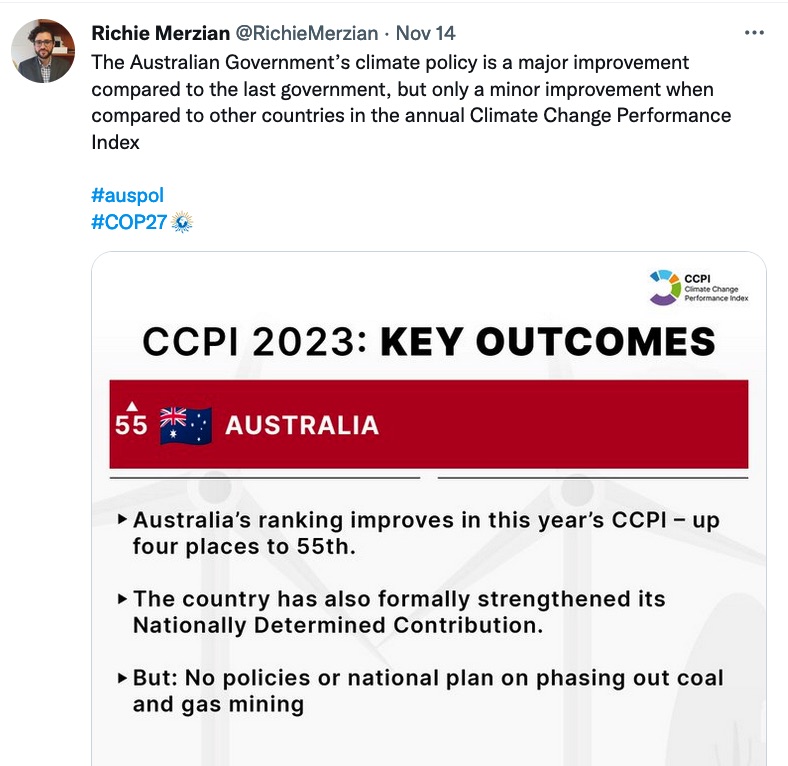 Meanwhile, The Lancet Planetary Health journal, in an editorial titled ‘A role for provocative protest’, says there is some evidence that disruptive or radical non-violent actions, within the context of a wider movement that uses a mix of protest and lobbying approaches, can be effective.

Some have drawn parallels between the actions of climate change protest groups and the tactics of non-violent protest taken by activists in the civil rights movement in the USA, or the Suffragette’s campaign for women’s right to vote in the UK.

“These, and other social movements, have used non-violent disruptive actions to draw attention to their cause; actions that at the time were decried by the majority as extreme and counterproductive, but through the filter of history are now seen as necessary and worthy.

“In democratic societies, when governments fail to address major injustices, civil disobedience can be the just response.

“It is hard to argue that we are not in such a moment. Meeting the internationally agreed goals of the Paris Agreement to limit global warming to 1·5°C or even 2°C, and avoiding catastrophic climate change impacts, requires a rapid transition away from carbon-intensive societies.”

The editorial says that “global progress is nowhere near sufficient, and recent political events – such as the UK and German governments seeking to facilitate new oil and gas extraction projects, and the new Swedish government choosing to dissolve its Ministry of Environment – highlight the fragility of political commitment to climate change mitigation pledges”.

The editorial cites a recent review asking why, despite 30 years of research, political negotiations, and awareness raising since the Kyoto Protocol, the world has failed to curb greenhouse gas emissions. The power and inertia of existing political and economic systems, and of fossil fuel vested interests, have stifled change.

“In this context provocative acts of protest might draw public attention to weak government action and help the broader movement hold politicians and business leaders accountable.”

The article says scientists and health professionals remain among the figures most trusted by the public.

“Their voices are needed in protest. Members of campaign groups like Scientist Rebellion, Doctors for Extinction Rebellion, and Doctors for the Environment, are leading the way in demonstrating how their expertise, research and personal concern can be used to confront climate injustice, speak truth to power, and help to legitimise wider protests.”

They displayed a banner saying ‘For Health’s Sake. Stop Financing Fossil Fuels’, to highlight the estimated £10 billion in annual financial support the Government gives to the fossil fuel industry, according to the OECD.

According to a statement on 15 November by Extinction Rebellion, the judge who presided over the case said “I was impressed by the integrity and rationality of their beliefs” and “their evidence was highly moving.”

Dr Fiona Godlee, Ambassador of the UK Health Alliance on Climate Change and former Editor in Chief of the British Medical Journal, said: “I was a part of the protest on Lambeth Bridge and these doctors and health professionals have my full support. They have acted at all times with enormous professionalism, courage and integrity. Their protest is in a long tradition of non-violent civil disobedience for causes that seek to improve social justice and, in the case of climate protest, to secure a liveable future for all.”

One of the defendants, Dr Alice Clack, said: “As an obstetrician it’s becoming ever more clear that climate change will impact the life of every child I deliver. UN Secretary General Antonio Guterres recently said ‘We have a rapidly closing window of opportunity to create a livable future’, and yet our Government continues to invest in new fossil fuels we cannot safely burn.” 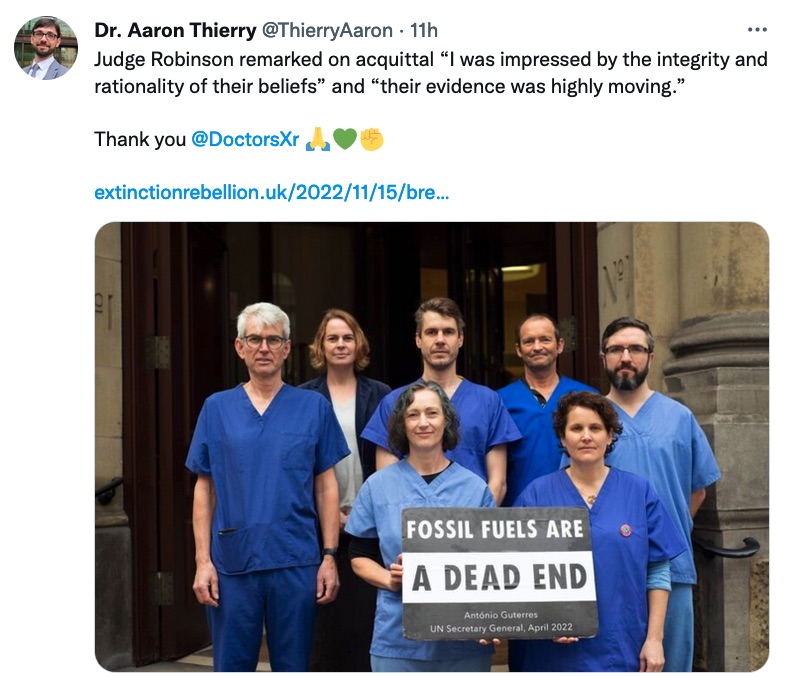 At the COP meeting in Egypt, meanwhile, the power and influence of the fossil fuels industry has been evident.

At least 636 fossil lobbyists were granted access to COP27, according to an analysis released by Global Witness together with Corporate Accountability and Corporate Europe Observatory.

The analysis said 29 countries brought a total of 200 fossil fuel lobbyists as part of their official delegations. More than one in five in Russia’s 150-strong delegation are from the fossil fuel industry, and at least six came from Australia suggests a search of the list. 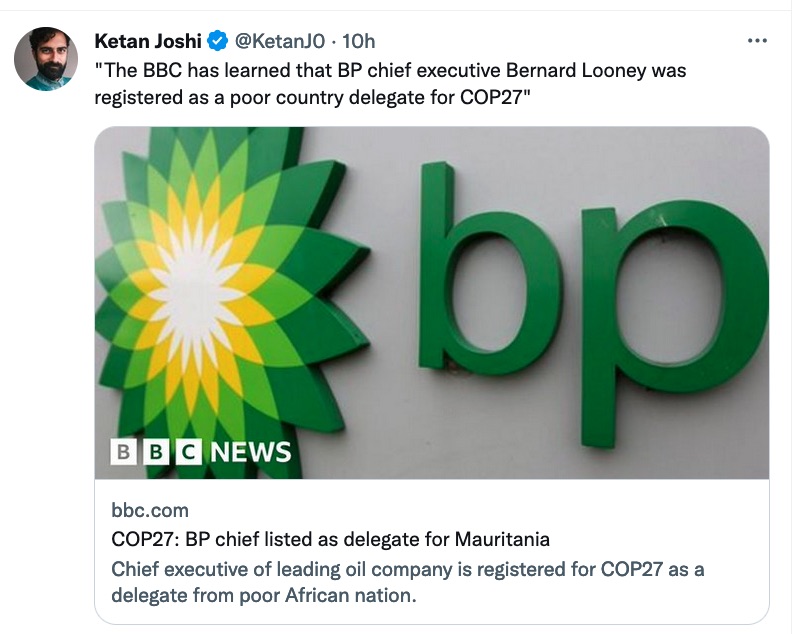 The analysis defined fossil fuel lobbyists as people who have links to companies with significant business activities in fossil fuels, or who are attending the talks as part of a trade body representing fossil fuel interests.

Global Witness, together with Corporate Accountability and Corporate Europe Observatory, have called for conflict of interest policies at COPs that would restrict fossil fuel lobbyists’ role, similar to the international ban on tobacco industry lobbyists in public health policy.

Meanwhile, as the tweets below indicate, many have been working hard to advance climate justice at the COP27. 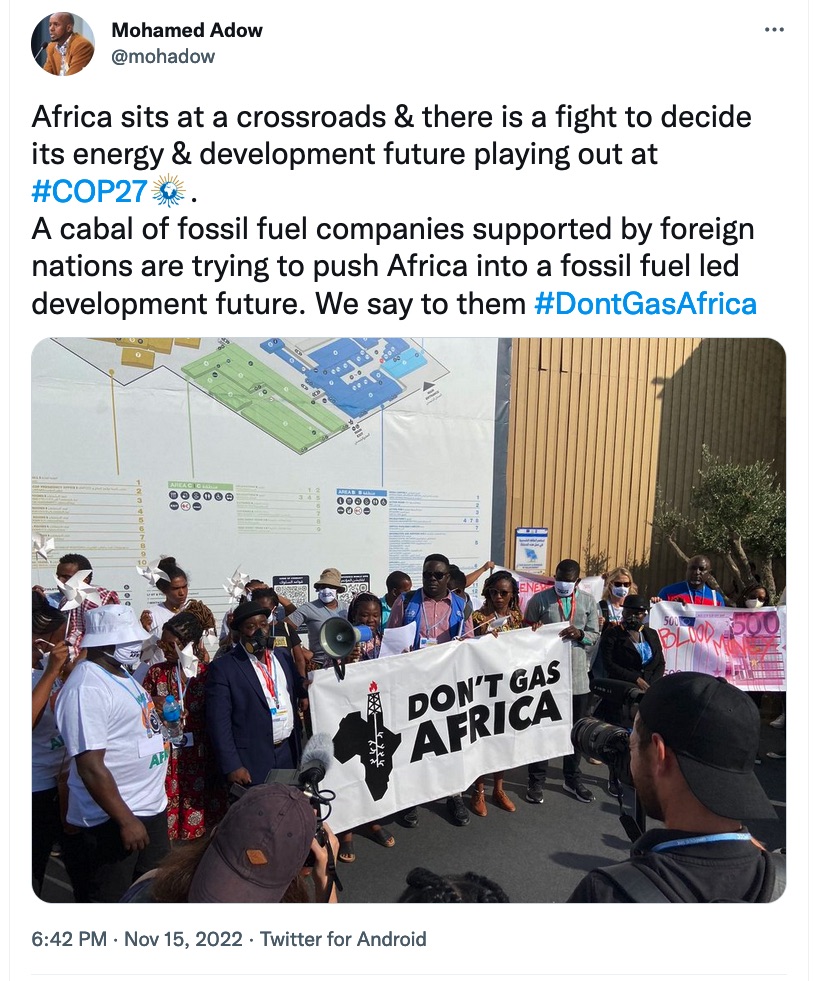 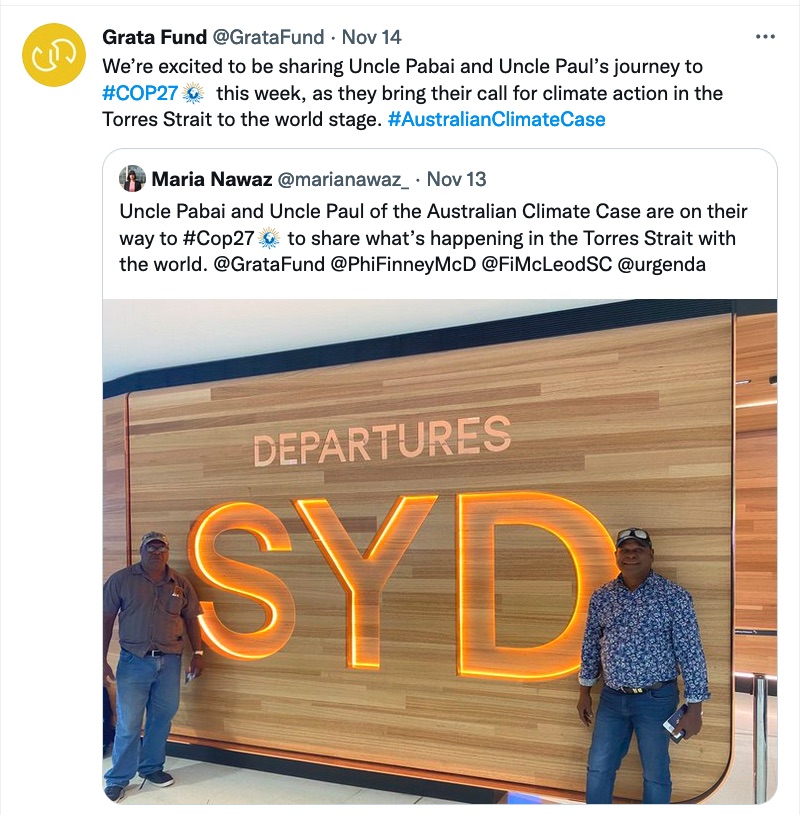 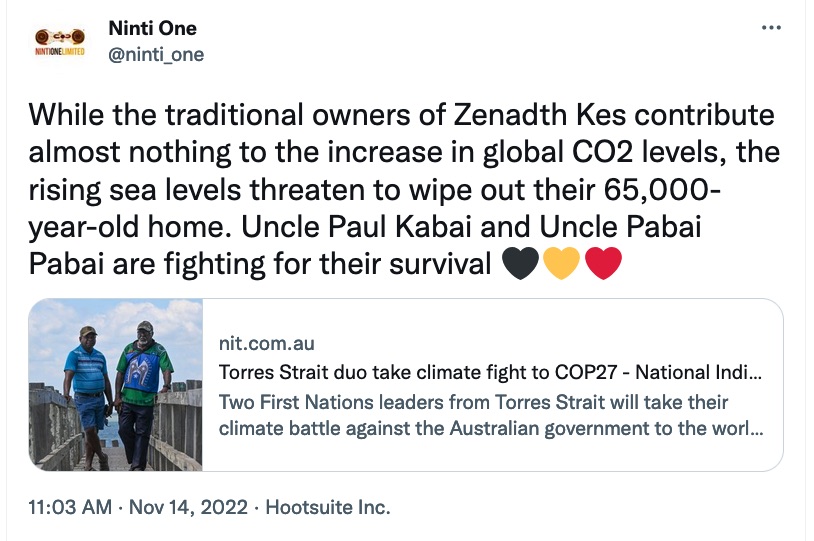 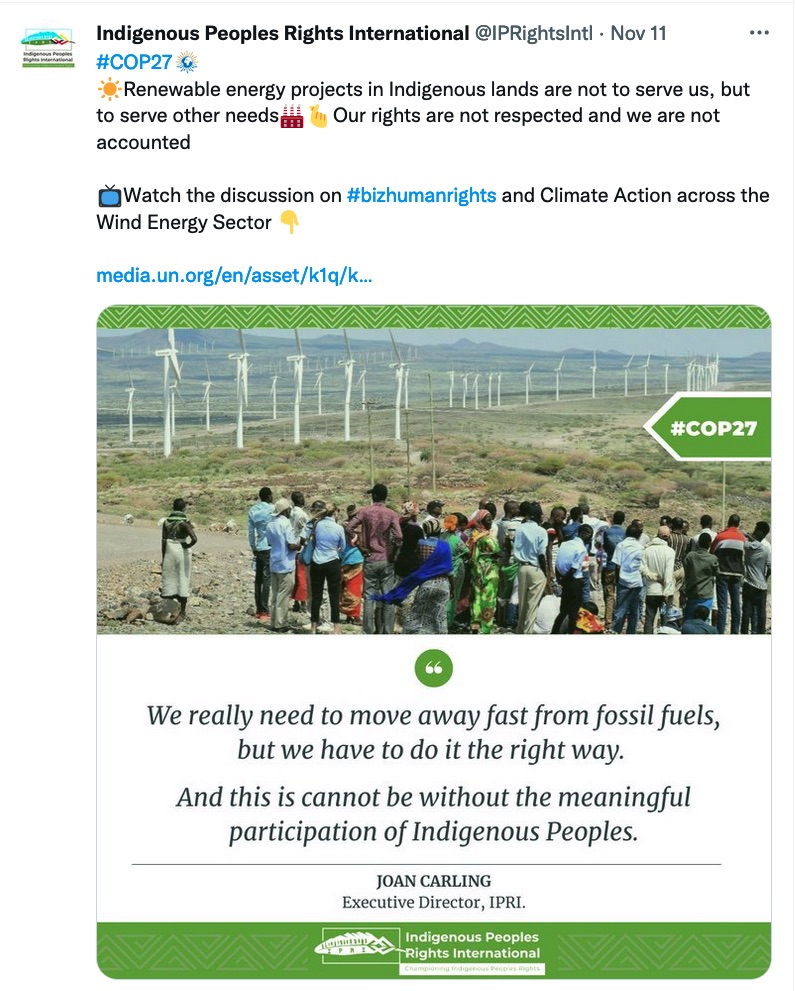 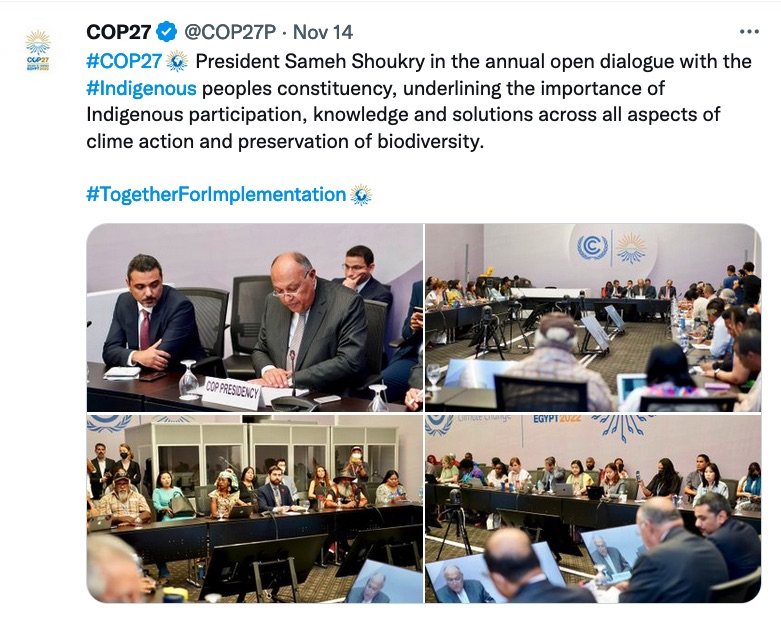 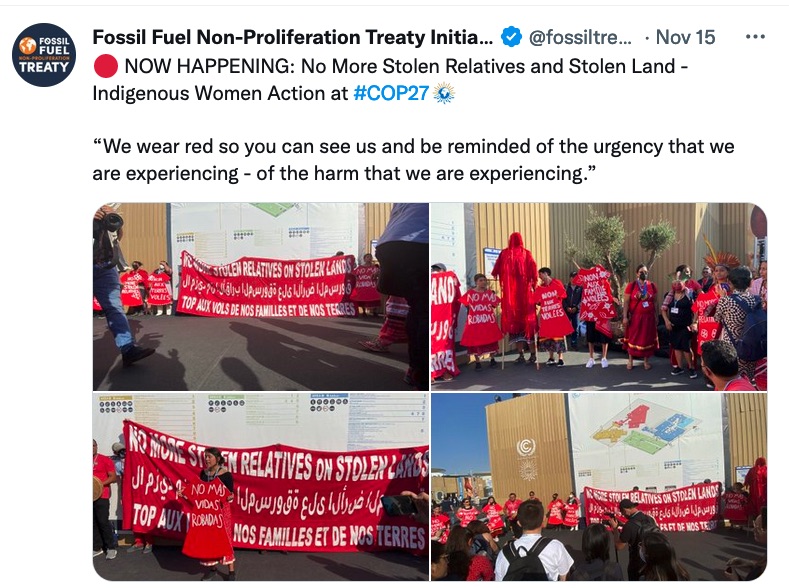 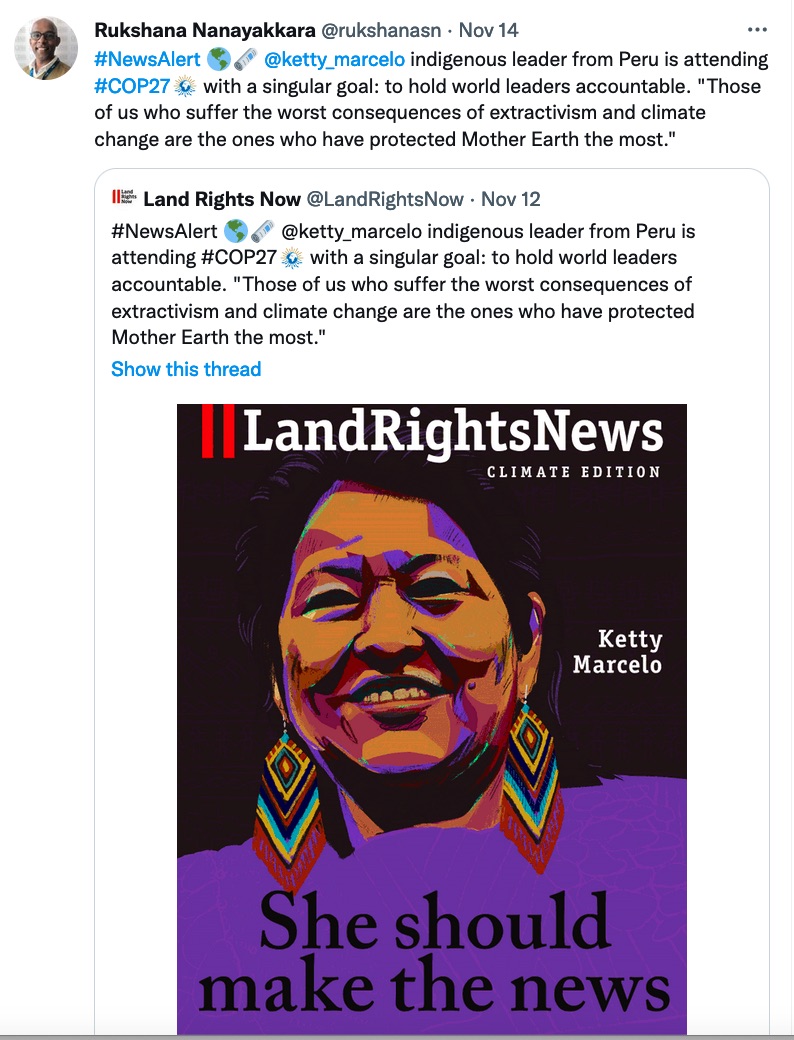 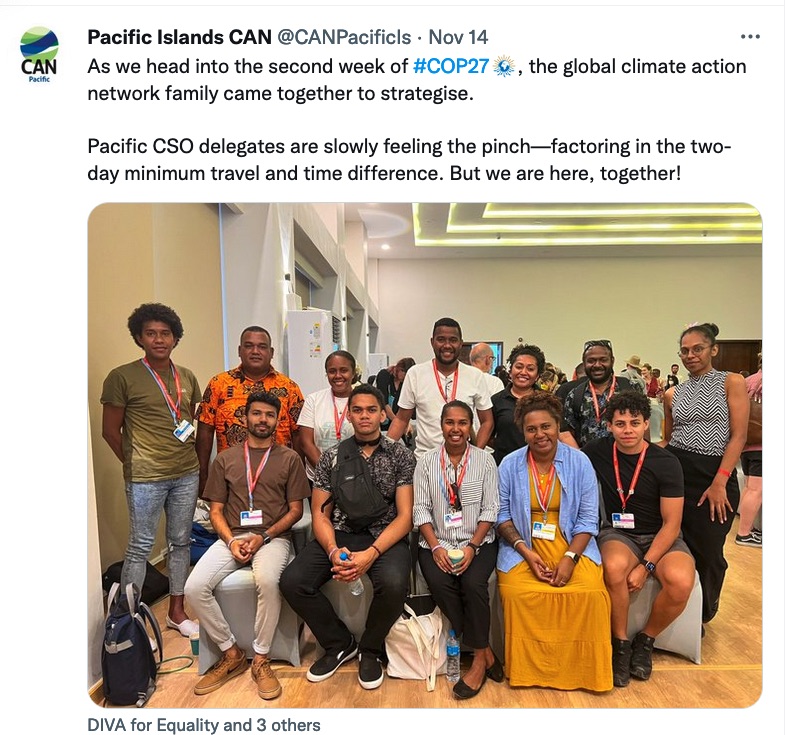 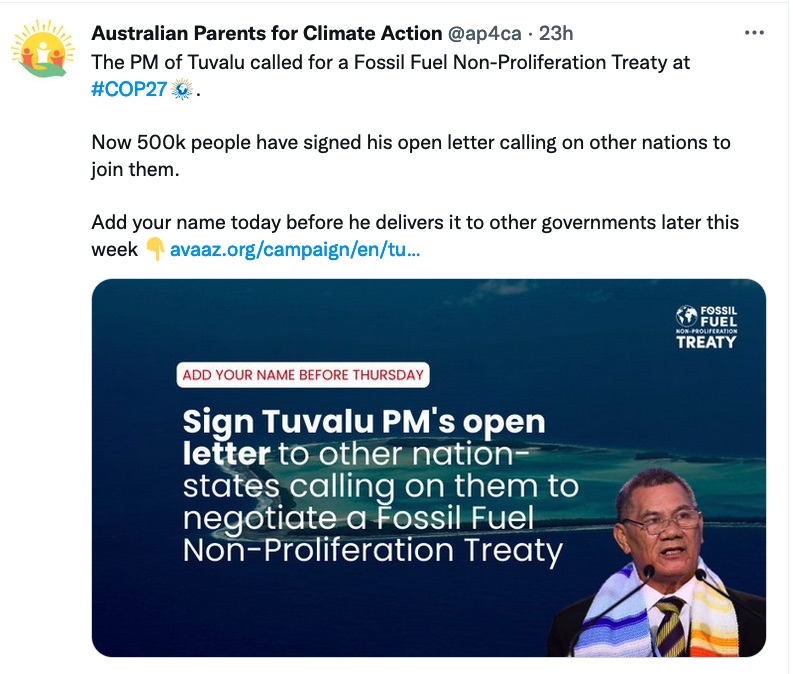 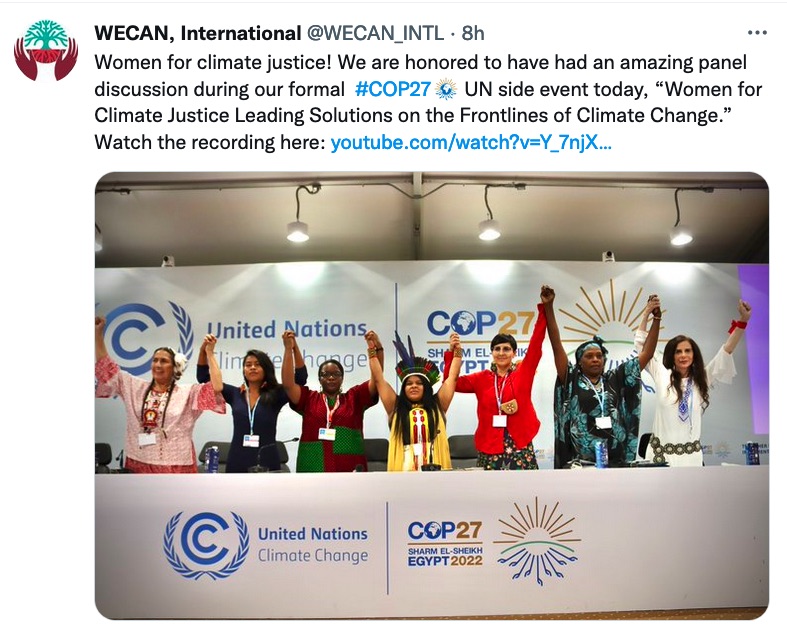 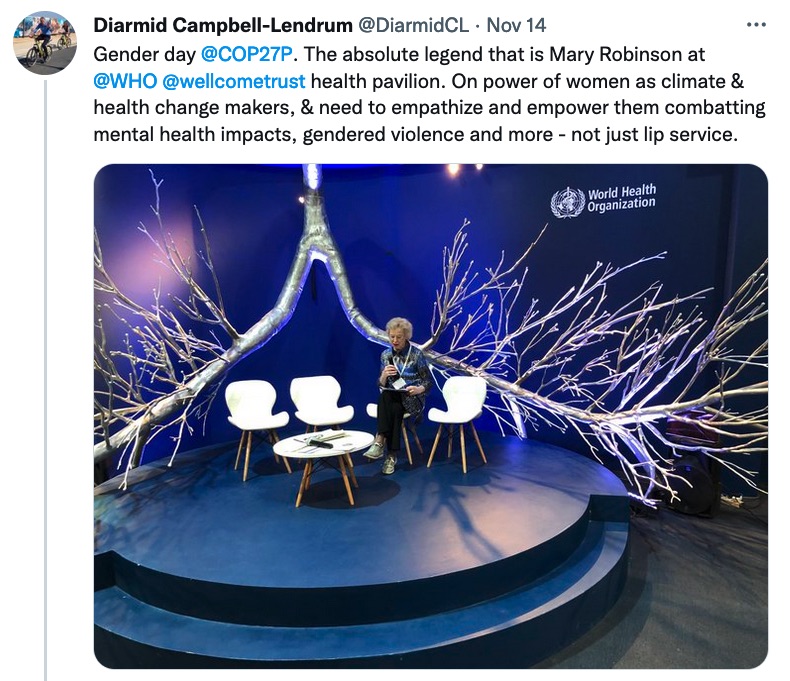 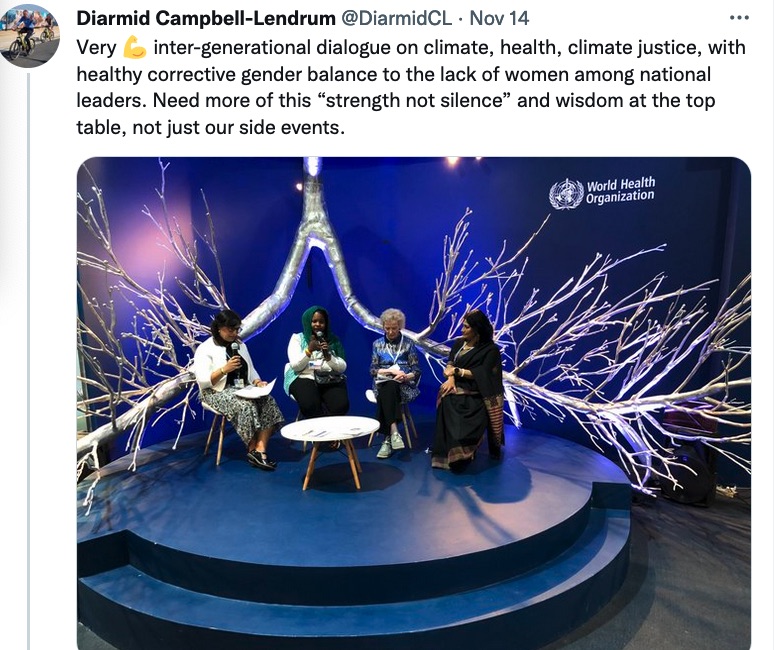 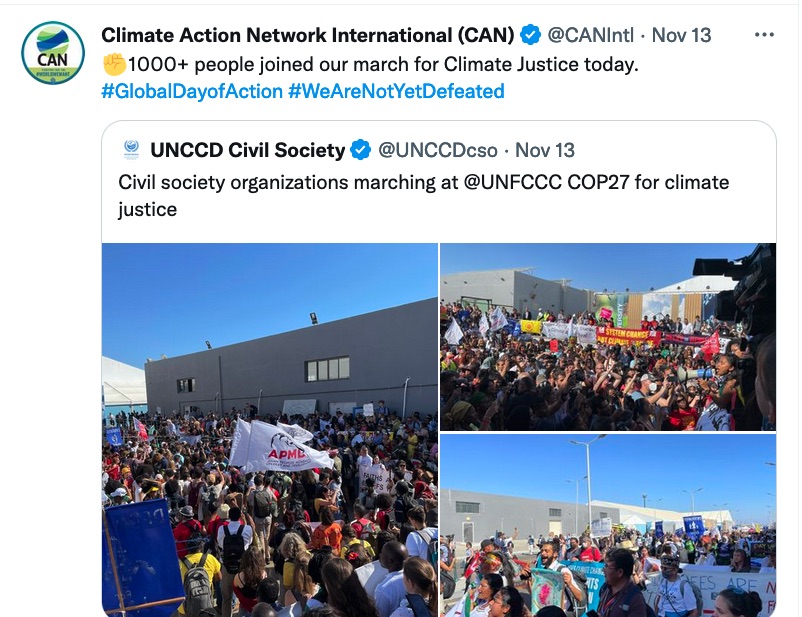 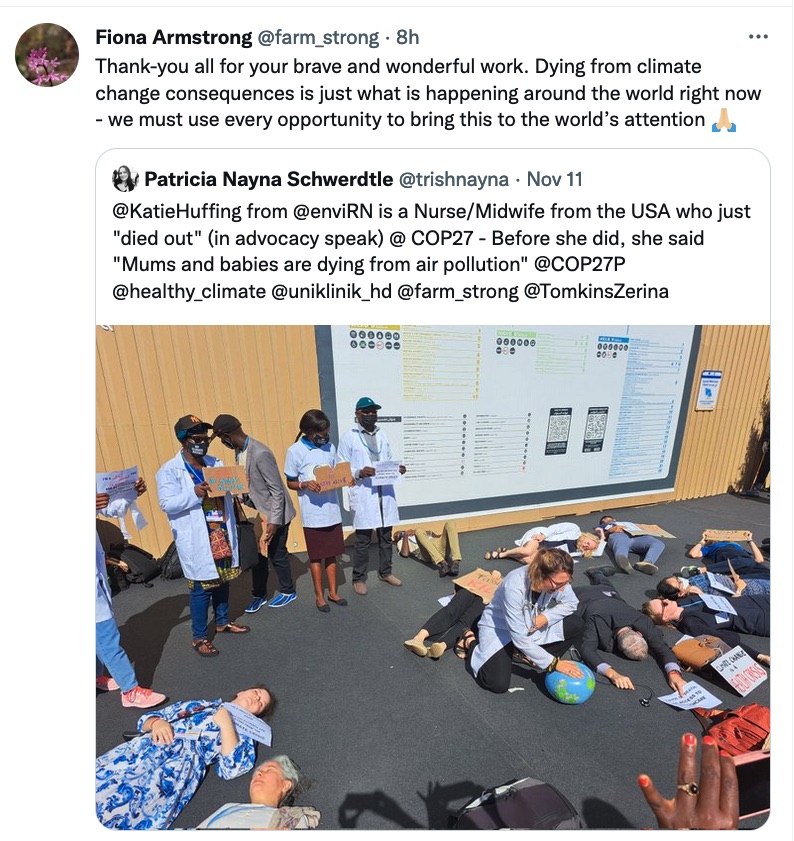 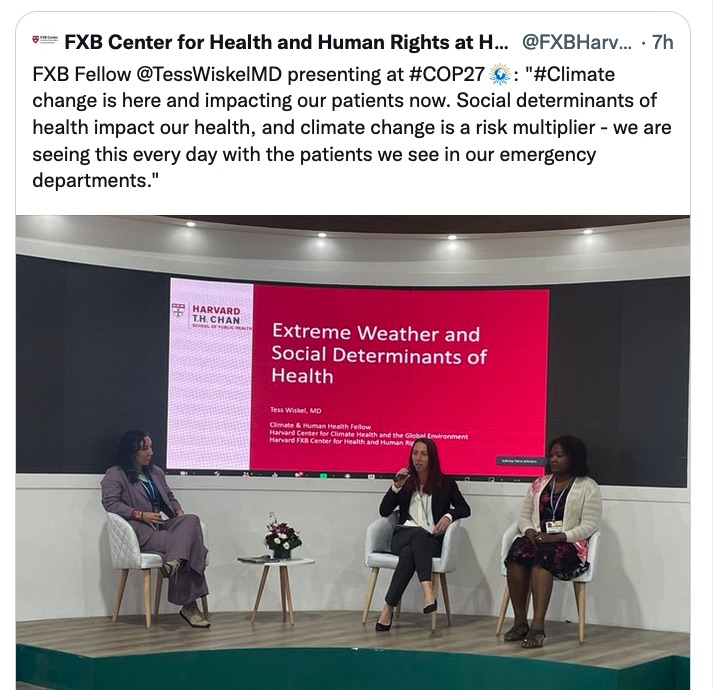 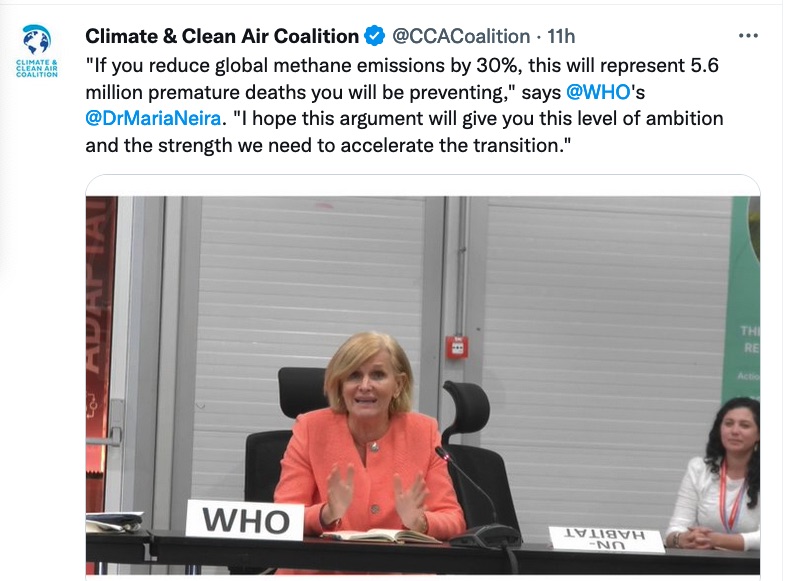 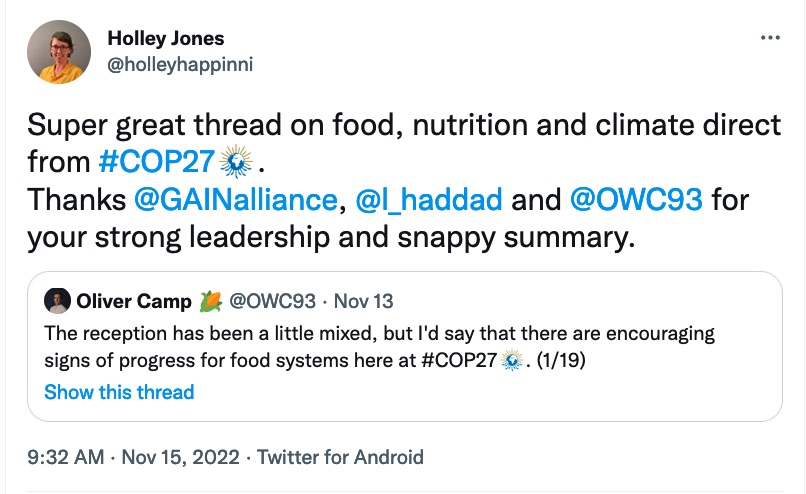 See the thread on food systems. 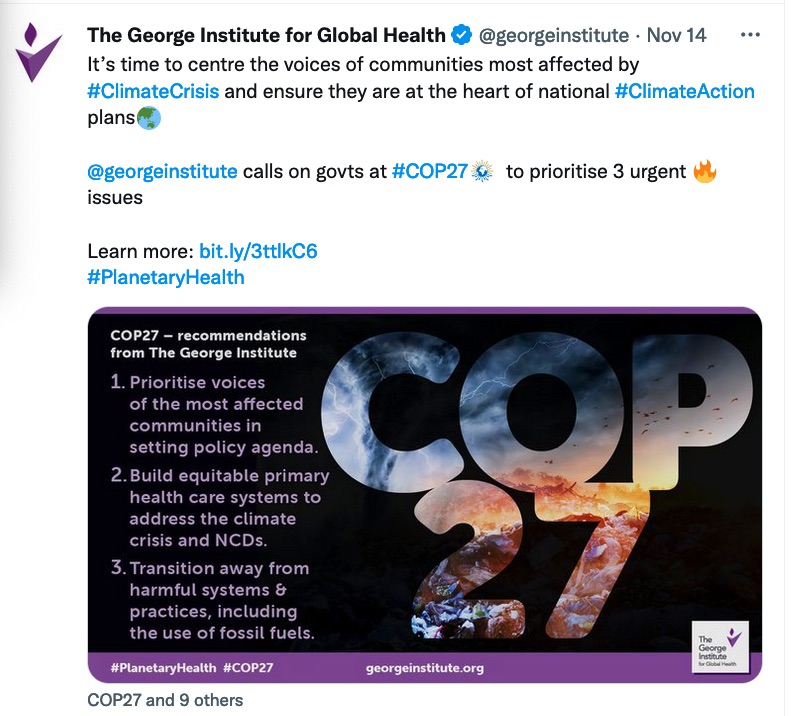 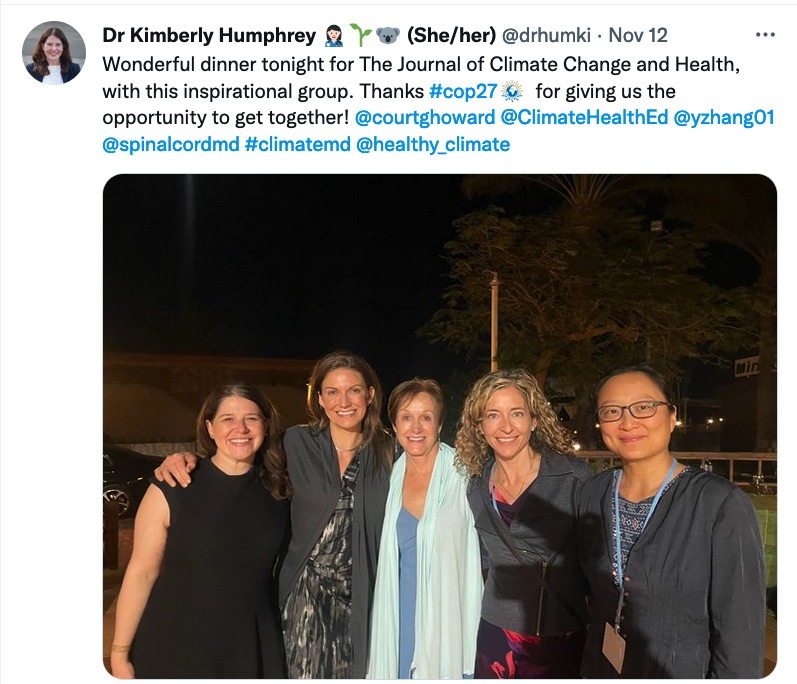 PrevPreviousLocally and globally, what will it take to reorient towards climate justice?
NextICYMI: predatory marketing, a voracious industry, systems of leadership and some events not to missNext