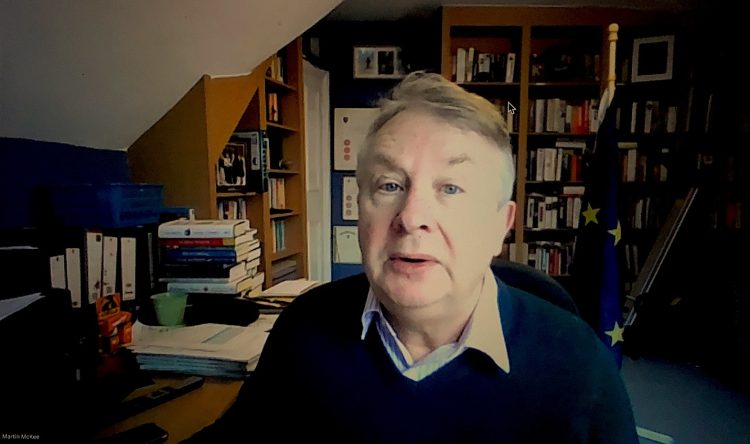 Professor Martin McKee: "Everyone’s life must be respected and I think we’ve lost touch with that."

As politicians abandon public health measures, a call for speaking “truth to power”

Introduction by Croakey: What is leadership in a pandemic? Looking around the world, it often seems easier to identify what is NOT leadership – when political and self-interest trumps the needs of those most at risk.

The World Federation of Public Health Associations (WFPHA) last week convened a panel discussion on leadership, where presenters urged public health leaders to press for vaccine equity, reform of the World Health Organization, and action to prepare for future pandemics and to address inequities and environmental crises.

Some speakers urged public health leadership to be much more outspoken and vocal in “speaking truth to power”.

The discussion was timely as health experts sound the alarm about England’s “unwise” plans to abolish public health measures and the potential for this to have a “domino effect” and influence other countries to do likewise. Prime Minister Boris Johnson is expected to announce the ‘living with COVID’ plans late Monday in London.

At the webinar, Professor Martin McKee, Professor of European Public Health at the London School of Hygiene & Tropical Medicine, put some challenges to public health and the wider health sector, including concerns about a lack of compassion from some.

We warned them, didn’t we? For years, many of us have been doing what we can to draw attention to the risk of another pandemic.

History was our guide. From the dawn of recorded history, we have had outbreaks of infectious disease that have had huge implications for the societies in which we live. First there was the plague of Athens, which paved the way for the rise of Macedonia, and Alexander the Great’s conquests. And the Black Death, of 1348, which transformed European society. Or the decimation of the Native American population after the Colombian conquest.

Thankfully, the damage done by COVID has been nothing like as great. We now have an unprecedented level of scientific expertise to draw on. Who could have imagined that we would deploy new vaccines, using an entirely innovative technology, within a year? But next time, we might not be so lucky.

Of course it is easy to blame our political leaders. It was the misfortune of some countries, including the one that I live in, to be led by some of the most incompetent politicians in their history. A former senior politician in his own party said recently, if Boris Johnson tells the truth, it is likely to be by accident. But the damage done by Donald Trump is of a completely different magnitude.

But maybe we need to accept some responsibility ourselves. Once again, we in the health community have been left to pick up the pieces of political failures. We were the ones who were there when the crisis emerged and who were expected to use our limited resources to care for large and unpredictable numbers of patients needing our care. Working in public health departments that have been ignored for so long, we were expected to mobilise on a massive scale to slow the spread of disease.

Our task was made so much harder by the vulnerabilities of our populations, people who have been left behind by a decade of austerity, whose precarious employment is an inevitable consequence of the economic model our governments have pursued, but did we speak out when we could?

Throughout the pandemic I have often wondered whether we have lost our way. We have acquiesced when politicians dithered and delayed or worse, have done things we knew were wrong and would cost lives.

We have clung to the mantra that science is science and politics is something else. Yet we, in the public health community of all people, know that this is nonsense.

Even the decision about what to research is political. Do we focus on the educational interventions to change behaviour that we know are ineffective rather that studying the social determinants of health? Do we emphasise individual responsibility when we know that even when people make choices, they don’t always do so in the circumstances of their own choosing? Or do we study the difficult issues, like racism or the political corruption that we have seen so much of, especially in relation to procurement of PPE?

Many of our most illustrious predecessors would also wonder. I often quote Rudolf Virchow, the pathologist tasked with responding to the typhus epidemic in Silesia in the 19th century. He was clear where the problem lay. It was the power of the aristocracy propped up by the church. Who among us is willing to call out the dysfunctional electoral college system that gave us Donald Trump? Because ultimately that was why so many Americans had their lives cut short unnecessarily.

Of course, you may well say, it’s all right for me to go on about leadership. What have I done? Certainly, much less than I should have. But I have at least tried.

Throughout the pandemic, I and a group of remarkable colleagues have been providing an alternative perspective on the UK’s management of the pandemic. Called Independent SAGE, to distinguish ourselves from the official advisory structure, although I don’t think we have ever disagreed with the scientists advising the government, we have been able to challenge ministers when they failed to follow the science. And we have given voice to the many people whose concerns have been unheard. In brief, we have spoken truth to power, perhaps the most important of all public health responsibilities.

But we need to do more. For over a year I was a member of the Pan European Commission on Health and Sustainable Development, chaired by former Italian Prime Minister Mario Monti. I also chaired its scientific advisory board and led the writing of the evidence review [as reported previously at Croakey].

This experience taught me something very important. Most of my fellow commissioners were from outside health. We had two former prime ministers and three former presidents. We had people from central banks and from the world of finance. But what united them was that they really cared about health. They realised that we had got things wrong. And they also knew that we could not make the same mistakes again. Above all, they displayed an ambition that is all too often lacking in our approach to the big questions. These are people who are used to getting things done.

So we came up with some radical suggestions. We need to change our relationship with animals and the natural environment. We need an approach based on OneHealth, an approach that confronts issues such as loss of biodiversity and climate change, and powerful vested interests, such as those involved in factory farming, so that we can reduce the risk of another pandemic microorganism emerging.

We need to change the discourse. A government that fails to invest in its health system is being reckless. In the past, the international financial institutions might have congratulated it, seeing its actions as good budgetary discipline. That has to change. All it is doing is increasing the risks it would face in another pandemic.

We need to confront policy failures in other areas. We cannot simply sit back and clean up the problems created by our political leaders, with economic and welfare policies that leave so many vulnerable.

This means that we must talk directly to heads of government. Let’s face it, in most governments, the health portfolio is what you give to the most junior minister, or to the minority party in a coalition. We talk about health in all policies but do we do anything about it?

Yes, this means that we have to get political. Not by tying ourselves to a particular political party but by confronting the political determinants of health. Otherwise, we are guilty of abdicating the leadership that we look for in others. And if we don’t, we need to ask ourselves why we bother getting out of bed in the morning.

We need to confront this issue of national sovereignty. The reality is that all of our countries have responsibilities to others, and we’ve been in a situation where countries that have managed the pandemic really well have then had the problems of cases being imported from other countries that have not done so.

We as a human race have been looking with horror at our fellow human beings in other countries who have had the misfortune to be governed by politicians that have failed to respond to the pandemic.

In the same way the world has come together in the past to tackle issues like nuclear weapons, chemical weapons, counterfeit bank notes, maybe we need to start challenging this idea that what happens within the borders of a country is only a matter for itself in terms of health. That will mean that countries that refuse to collect data and to report data on what’s happening – and there are countries that do that – will have to answer for it in an international forum. It will involve getting the World Health Organization more teeth…WHO would have to confront countries whenever they fail to live up to their obligations.

We can’t go back to where we were before. We’ve got to learn the lessons and that means we need to do more than pay lip service to this idea that micro-organisms don’t respect borders. They don’t – and the policies must also take account of that.

[Responding to a question about compassionate leadership]. I’m an epidemiologist, like many of us here, and we deal with numbers, very large numbers, but we need to always remember that behind every one of those numbers is a real person.

We’ve seen some really quite shocking statements come out from some people in our own community – in the health professions – underplaying the importance of [COVID’s impacts]…talking about that ‘the only children who have died have underlying conditions’. Well, they’re still children.

Or ‘it’s only the old that have died’ – almost eugenic statements that have come out and a lack of compassion in the epidemic, quite outrageous, from some people in public health and the health professionals – which I think we really need to stand up to, because everyone’s life is valuable. Everyone’s life must be respected and I think we’ve lost touch with that.

We need to stop dismissing evidence as anecdotal. We need to stop dismissing qualitative research. We need to listen to people who are affected by the policies that we implement. One of the biggest failures in the United Kingdom all the way through has been that nobody actually listened to the people who were affected on the frontline, the teachers, the health professionals, the public health teams and others.

It’s affected all of the things we’ve got wrong – we’ve got a few things right, the science has been great, but much of the rest of it has been catastrophic.

• The article above incorporates Professor Martin McKee’s speaking notes and edited comments in response to questions at the webinar, which can be viewed here.

(Declaration from Croakey: Melissa Sweet participated in the webinar and is a member of the WFPHA’s Public Health Leadership Coalition).

PrevPreviousAs public health interventions are lifted, who is bearing the burden?
NextRe-thinking the public health approach to racismNext