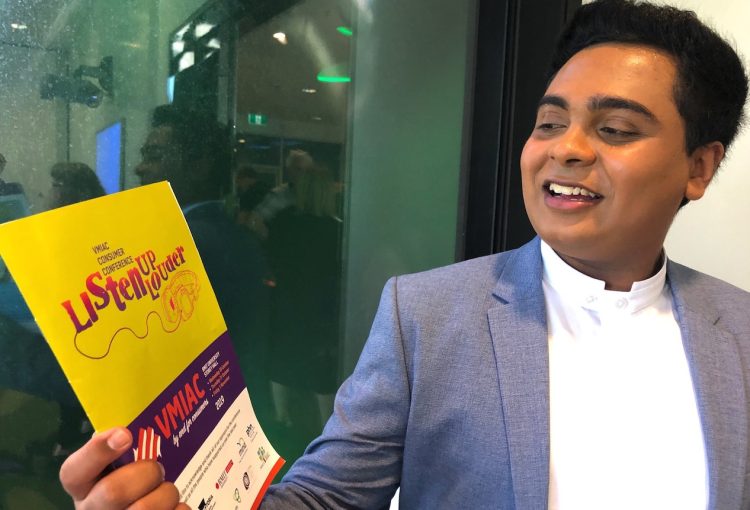 Introduction by Croakey: The mental health and wellbeing of children and young people is one of the key areas identified for action in a two-volume draft report released today by the Productivity Commission urging wide-ranging reforms in mental health.

The report, which nominates schools, universities and the Vocational Education and Training (VET) sector as key sites for intervention, calls for:

The report notes that children  and  young  people  are  far  less  likely  to  access treatment and support, although young adults experience higher rates of mental illness than the rest of the adult population, and about three-quarters of adult mental health disorders emerge by age 25. 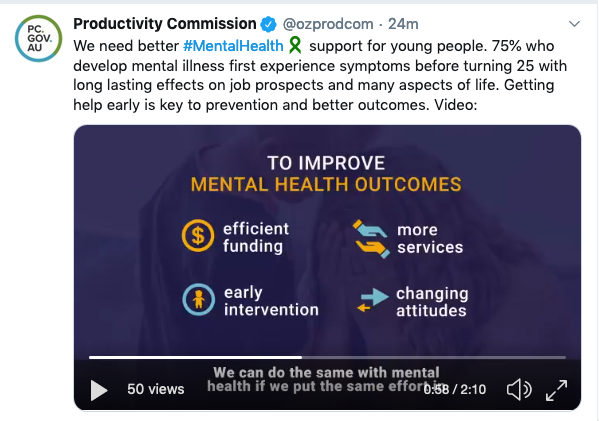 The report, which also calls for investment in services beyond health, including long-term housing solutions, says:

Supporting the mental health and wellbeing of children and young people has been on the policy agenda for many years.

But despite substantial efforts – including billions of dollars spent, countless hours of work by teachers and other education professionals, doctors, nurses, specialists and experts, and Australia being considered globally as a country with proactive, comprehensive early intervention and prevention measures – improvements in the mental health of children and young people have been limited.”

Mental health and other services need to stop treating people with lived experience as “cheap labour” and focus urgently on building more peer informed, inclusive services that can treat the complex, often intersectional mental health needs of many young people.

That was one of a number of calls for change to emerge from a dedicated Youth Day held yesterday as part of a biennial conference for mental health consumers hosted this week by the Victorian Mental Illness Awareness Council (VMIAC).

Keynote speaker Elvis Martin opened the conference with a call to arms to young people with mental health issues, urging them to take to social media with their stories to combat an ongoing “environment of shame and stigma”.

That can be particularly damaging for young mental health consumers who are LGBTIQ+ and/or from culturally and linguistically diverse (CALD) communities and “don’t feel safe” to speak up or reach out for help, he said.

You don’t have to have a PhD or Masters. Your lived experience is enough. 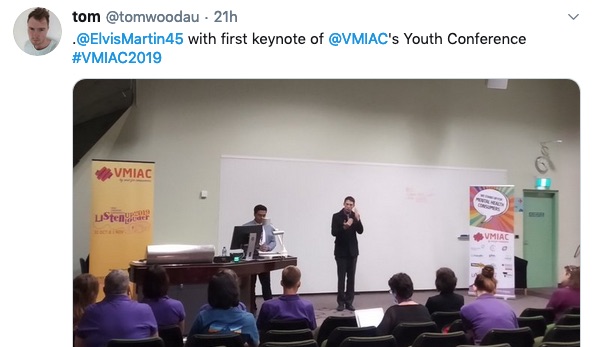 Martin is an Ambassador of National Youth Commission Australia and RUOK? and a ‘changemaker’ for the Australian Red Cross. His advocacy work is focused on mental health, homelessness, domestic violence, suicide prevention and the LGBTIQ+ community.

Urging a bigger and broader peer workforce in mental health, he said he wanted to “live in a world where being vulnerable is not seen as incapable”.

But he said too many services and organisations employed people with lived experience “in a very tokenistic way to tick their boxes and win tenders and grants”.

He told of one person he had met recently who had been volunteering with an organisation for four or five years and in return was only occasionally given money for public transport.

That is not paying for the person’s time.

As well as stigma and isolation, cost of health care is a big barrier for many students, he said.

Martin said he had recently accompanied a suicidal international student to a hospital, only to be told the student could not access treatment or support unless he paid a $570 fee or was arrested and brought for treatment by police.

Watch this interview with Elvis Martin

One panelist was a young transgender person who talked about often having to educate health services and professionals about the issues they were dealing with, and of having to go to one service for support with trauma issues and another for support with gender transitioning rather than having integrated support.

“LGBTIQ posters and ‘he/she’ buttons are not enough,” they told the session, which also heard calls for health services and professionals to take greater responsibility for educating themselves on issues of intersectionality, and not just blame their past studies or training for not knowing.

“It’s not my responsibility to teach my psych what I’m going through (as a trans person)”, the panelist said.

Mainstream services can also make too many assumptions about the support a young person can access from family, the discussions heard.

“Because you live at home, they assume you get support,” said one panelist.

This is also a problem for young people who have had to leave home because of problems associated with their mental health and who may be estranged from family. They often end up without support if they are hospitalised because their friends – “their ‘chosen’ families” – aren’t given family status by the health system. 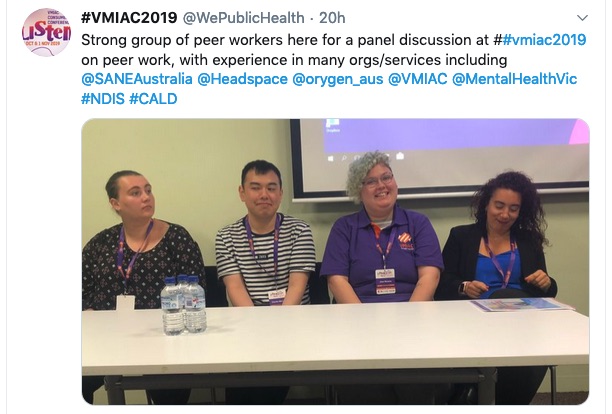 I’ve been sent to hospital a couple of times. The first thing they want to do is call my mum and dad.

The reason I was going to hospital was because of trauma-based illness that’s caused by my family so inviting family is the last thing I need, it’s only going to aggravate the symptoms I’ve come to hospital for.

In the queer community we talk a lot about our chosen family, our community but the  hospitals don’t recognise that friendship is family.

The system isn’t designed to allow that, so we’re isolated and terrified and alone. We can’t get the support that other people can take for granted.”

Panellists also talked about missing out on support because of costs, with little mental health support available through the public health system and many young people, particularly those without family support, unable to afford private health insurance or fees.

They also raised geographic barriers, including lack of services in outer metropolitan areas and lack of privacy in services in rural areas, where the relevant clinician may be related or a family friend.

Watch our interview with Jamie Sea who, as well as talking about service system issues for young people, calls for “grassroots” change on racism, homophobia and transphobia which play critical roles in mental health issues. 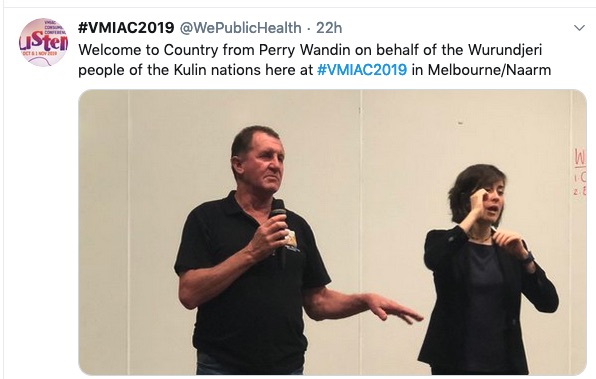 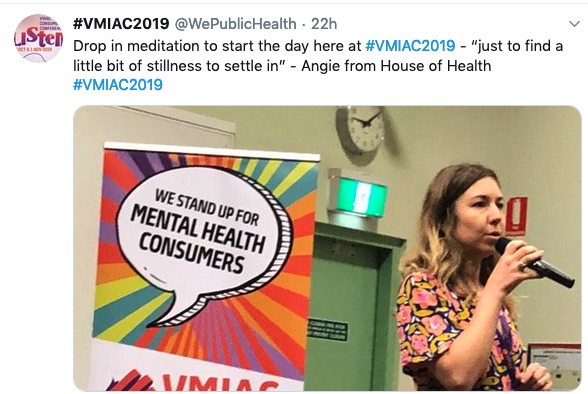 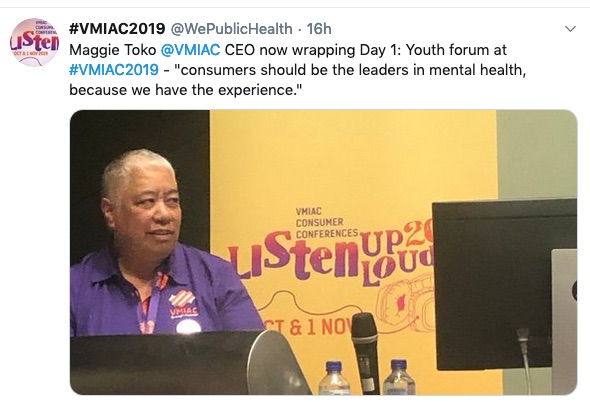 • For more on the Productivity Commission’s draft report, see this analysis of the report and call to action for health equity responses, as well as this 58-page compilation of the Croakey team’s Twitter summary.